Insurgent Candidate Kerri Harris Has a New Job: Lobbyist for the Working Poor

The challenger to Delaware Sen. Tom Carper is taking her anti-poverty push national. 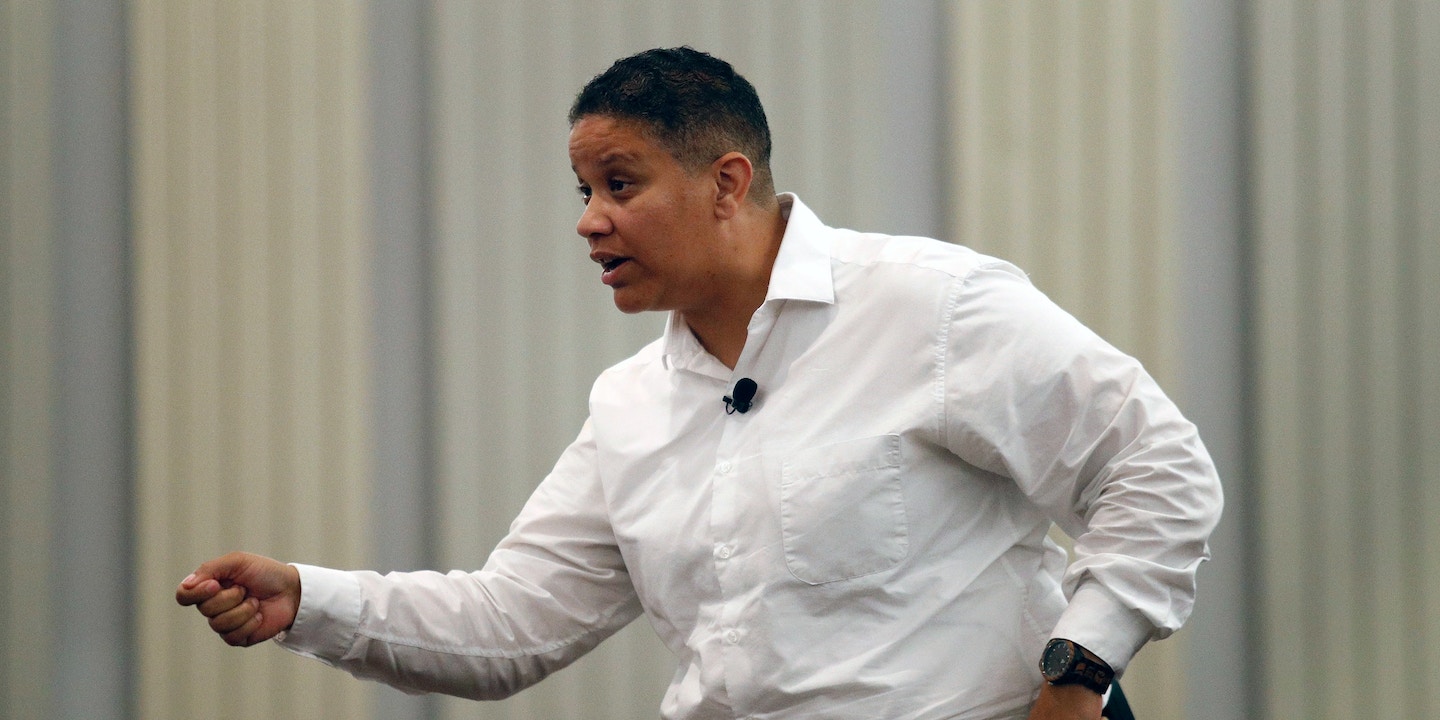 Kerri Harris, the insurgent candidate who lost her primary challenge to Sen. Tom Carper in Delaware, will be taking a new national advocacy director position at Working Hero Action, a nonprofit organization advocating for the earned-income tax credit and other anti-poverty policies.

Harris, a 39-year-old queer woman of color and an Air Force veteran, rose to national prominence when she decided to challenge Carper, a powerful Democrat who had held his seat for three terms, from the left. While Harris, whose campaign was outspent 10-to-1 by Carper’s, ended up losing the election by a 30-point margin, the 35 percent she pulled was more than Delaware politicos had thought was possible against Carper, a local icon.

“If I just went back and got a regular 9-to-5 job, so much of the work that had been done would be halted,” Harris told The Intercept. “It would make many people who were inspired lose some of that inspiration, thinking, Well that’s it? You run a race and then it’s over? What about us, what about the movement?”

For a politician, Harris brings an unusually intimate understanding of the effects of policies she’ll be pushing for, especially the need for a cash benefit. Even during her Senate run, as she was profiled in glossy national magazines, she remained mired in poverty, cycling through the same few outfits that bore the brunt of the campaign. Growing up in poverty gives a politician an important understanding of its character, but grinding through it as an adult puts it into even sharper focus. She says that getting the new job is in and of itself a relief.

Harris told me that only recently, she had been asking her daughter, who was turning 8 years old, whether she wanted a birthday party. “She kept saying no,” Harris said. “And then she confessed a couple of weeks ago that she did want one, but she knew that I didn’t have a lot of money, so she didn’t want me to feel stressed. I felt horrible.”

Harris says that she’s thinking of running again in the future. But for now, she sees her role as using the platform she built from her campaign to highlight working-class issues in her new position at Working Hero Action.

Working Hero Action is an organization that advocates for ending poverty, mainly through state-level campaigns to expand the EITC and by helping low-income people claim their benefits. During the 2018 election, the organization’s founder, Joe Sanberg — a wealthy investor and co-founder of Aspiration.com, a financial company that helps direct users toward socially conscious banking and spending — created a PAC to support progressive candidates, one of whom was Harris. “Kerri speaks with passion and heart that she also marries with an intellectual mastery of the policy issues,” Sanberg said. “So to have her as our national advocacy director for the culture change we want to create, and ultimately the agenda to end poverty, is a natural fit.”

Sanberg himself grew up in a low-income household raised only by his mother, and their family ended up losing their home to foreclosure. “It sure felt like poverty, at least to her,” Sanberg said, “because she was always struggling to make ends meet, pay the bills, and also trying to shield me and my brother from all of that.” While most Americans are not currently under the official poverty line at any given time, 40 percent are one missed paycheck away from falling into poverty.

The EITC, which is touted as a policy with bipartisan support, is the country’s primary mechanism for delivering cash benefits to low-income workers through an annual tax refund. But it’s often criticized by progressives because the benefit only goes to the working poor — that is, only those who have an earned income of at least $3,000 get the full benefit. Those who have no earned income, as the name suggests, get nothing.

The EITC’s exclusion of the poorest Americans is a feature, not a bug, of the tax credit, which was massively expanded during the Bill Clinton welfare-reform era and designed to encourage working. It has drawn criticism from some on the left for playing into the idea of “deserving” and “undeserving” poor people. Clinton’s presidency also saw the decimation of what we usually think of as cash welfare for the poor. The result has been the number of households in extreme poverty, or those living on $2 a day, more than doubling in the two decades since welfare reform.

Even the two big plans put forward by Democrats over the past few years to increase the EITC — Sen. Kamala Harris’s LIFT Act and Sen. Sherrod Brown and Rep. Ro Khanna’s GAIN Act — still exclude the nonworking poor. On the other hand, because the EITC encourages work and can act as something of a subsidy for wages, it has maintained a level of bipartisan support even in an increasingly polarized political climate. And though Harris ran as an insurgent, she talked often in her campaign about finding common ground on policies to make immediate improvements in poor people’s lives, arguing that the poor couldn’t afford to wait.

Harris says that expanding the EITC to cover those gaps is part of the policy issues that she is looking to push for in her new position, including making the benefit available to those who are excluded from the traditional definition of “work,” such as caregivers.

What constitutes “work” is often circumscribed by one’s socioeconomic circumstances. During the 2012 presidential campaign, the elite political world took great umbrage at the suggestion that Ann Romney, a stay-at-home mom, did not “work,” arguing that domestic labor should count. Yet, in order to obtain TANF benefits, poor parents must participate in what are described as “work activities” — and raising small children does not count as work.

“How many moderate- to low-income households choose for a parent to stay home because it’s cheaper than day care?” Harris asked. “If we are not providing for those people to make sure that they are doing better, then there are concerns. ”

Harris’s group will also be supporting policies like the Green New Deal and universal health care, as well as proposing a “green EITC” that would give people working in green jobs an even larger tax credit. “If we start to show people what counts as a green job and how you can benefit, it’s easier to push long-term for something like a Green New Deal because people see themselves in it,” Harris said.

Expanding the EITC is often seen by progressives as a step toward better and more comprehensive goals, such as a universal basic income or something that could work in concert with other cash benefits that would cut into deep poverty, such as a child allowance. Brown and Sen. Michael Bennett have already proposed child allowance legislation, which would give families $3,000 a year for children between the ages of 6 to 18 and $3,600 for children under 6, transferred through a monthly benefit. Such a policy is far from radical — most wealthy countries already have some type of child allowance benefit. Harris told me that they were not yet looking into universal basic income or child allowance proposals, yet stressed that “EITC is just the start.”

The politics of universal income decoupled from work are still tricky, and fraught even on the left, as the rollout of the Green New Deal showed. The office of Rep. Alexandria Ocasio-Cortez erroneously posted a draft version of an FAQ that said the Green New Deal would offer economic security for those “unwilling to work.” That led to several days of conflicting reactions, with Ocasio-Cortez suggesting, though not outright saying, that the document had been doctored. It culminated with her chief of staff, Saikat Chakrabarti, acknowledging that the draft was real and explaining that what the office had in mind was a policy such as pensions for coal miners who had put decades in the ground and weren’t interested in being retrained for something new.

Sanberg pointed out that while he was excited about the competing progressive ideas to combat poverty, there are still billions of dollars of EITC left unclaimed by low-income families. One of his organizations, CalEITC4Me, was founded to help low-income Californians claim the credit. “We don’t have to choose between policy advocacy, policy debate, and progressive community service,” Sanberg said. “We have to do all at the same time.” They recently launched an arm of the organization in Iowa to help people claim their EITC benefits and to raise the issue of poverty for presidential candidates coming through the state during their campaigns.

“It is truly personal,” Harris said of fighting for issues affecting the poor and working-class. “I feel it every day.”