Watch: a Contentious, Constructive Debate on the Media and Political Humiliation from the Mueller Report

The Mueller report has destroyed the credibility of huge swaths of the political and media elite, and deservedly so.

I obviously intended to write about the fallout from Attorney General William Barr’s summary of the Mueller report: specifically his definitive finding that “the Special Counsel did not find that the Trump campaign, or anyone associated with it, conspired or coordinated with the Russian government” and that “the report does not recommend any further indictments, nor did the Special Counsel obtain any sealed indictments that have yet to be made public.” Those two sentences alone permanently destroyed the prevailing Trump/Russia narratives – from blackmail fantasies to collusion tales – that consumed most of U.S. politics and media discourse for much of the last three years.

Just three weeks ago – three weeks ago – former CIA Director and now NBC News analyst John Brennan confidently predicted that Mueller was just weeks if not days away from arresting members “of the Trump family” on charges of conspiring with the Russians as his final act. Just watch the deceitful, propagandistic trash that MSNBC in particular fed to their viewers for two straight years, all while essentially banning any dissenters or skeptics of the narrative they peddled to the great profit of the network and its stars:

You can't blame MSNBC viewers for being confused. They largely kept dissenters from their Trump/Russia spy tale off the air for 2 years. As recently as 2 weeks ago, they had @JohnBrennan strongly suggesting Mueller would indict Trump family members on collusion as his last act: pic.twitter.com/nPlaq5YVxf

But what prevented me from writing anything is that Matt Taibbi brilliantly wrote everything I wanted to say in this definitive article on the debacle, one that I urge everyone to read. It lays out in indisputable, horrific detail the media’s indescribably and relentlessly reckless behavior over the last three years, whereby they abused and exploited valid fears of Trump to sell – for their own profit and benefit – completely false and baseless conspiracy theories that have now been completely debunked by their own anointed authority. I won’t excerpt any parts of it because it should be read in full by as many people as possible.

As Taibbi says, while the Iraq War was far worse in terms of impact (at least thus far), the media’s endless series of deceitful and manipulative behavior and spreading of blatantly false conspiracy theories since 2016 was far worse. In sum, Rachel Maddow is the Judy Miller of the Trump/Russia story, except that unlike Miller – who was scapegoated for behavior that many of her male colleagues also engaged in to the point where her career and reputation was destroyed – Maddow, who makes $10 million a year from NBC, is too valuable a corporate brand and too much of a liberal celebrity for any consequences or accountability to be permitted. Another difference is that Maddow was so far more frequently off the deep end – way off the deep end, in another universe totally devoid of basically rationality – than Miller ever was. 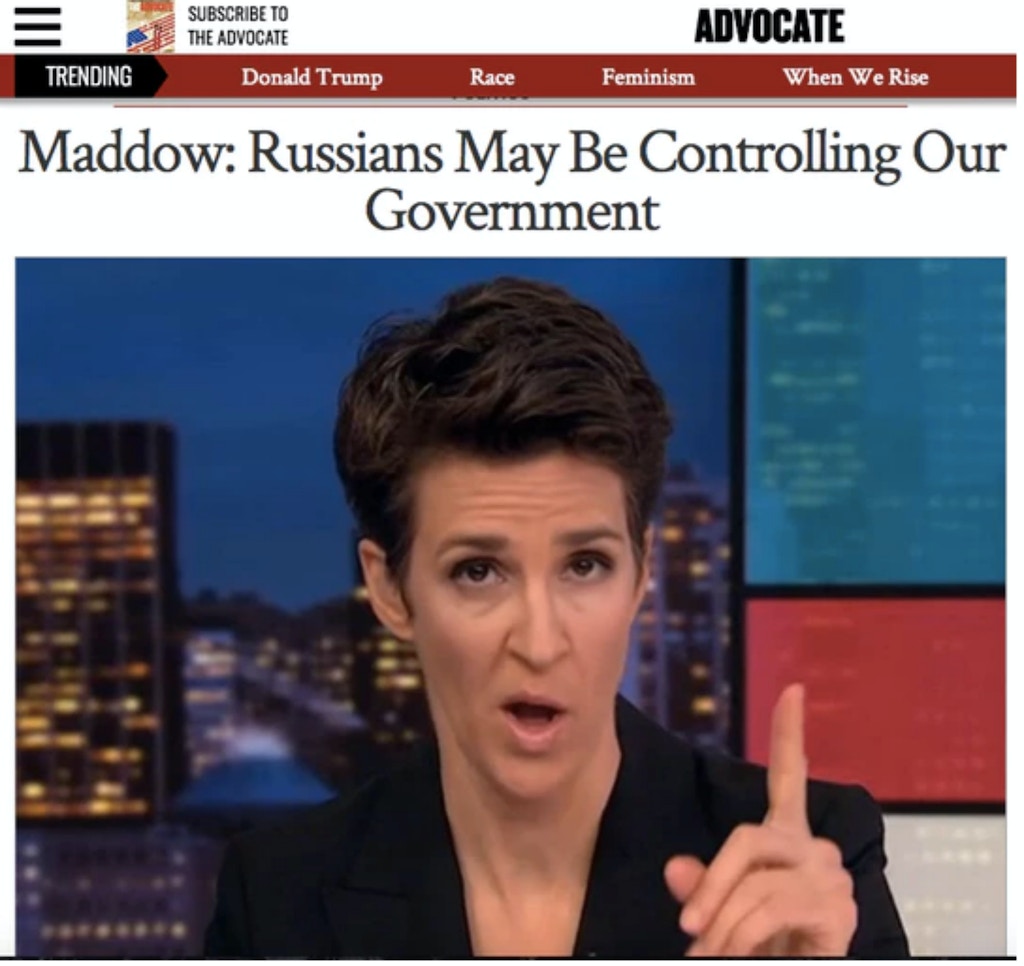 In lieu of trying to add to anything Taibbi wrote, I will instead post the video debate I had with Pulitzer-Prize-winning journalist and Trump/Russia believer David Cay Johnston on Democracy Now this morning. Though this debate was often contentious, I think it was quite substantive and illuminates all of the points I believe need to be made right now about the implications of this utter political and media failure of historic proportions: