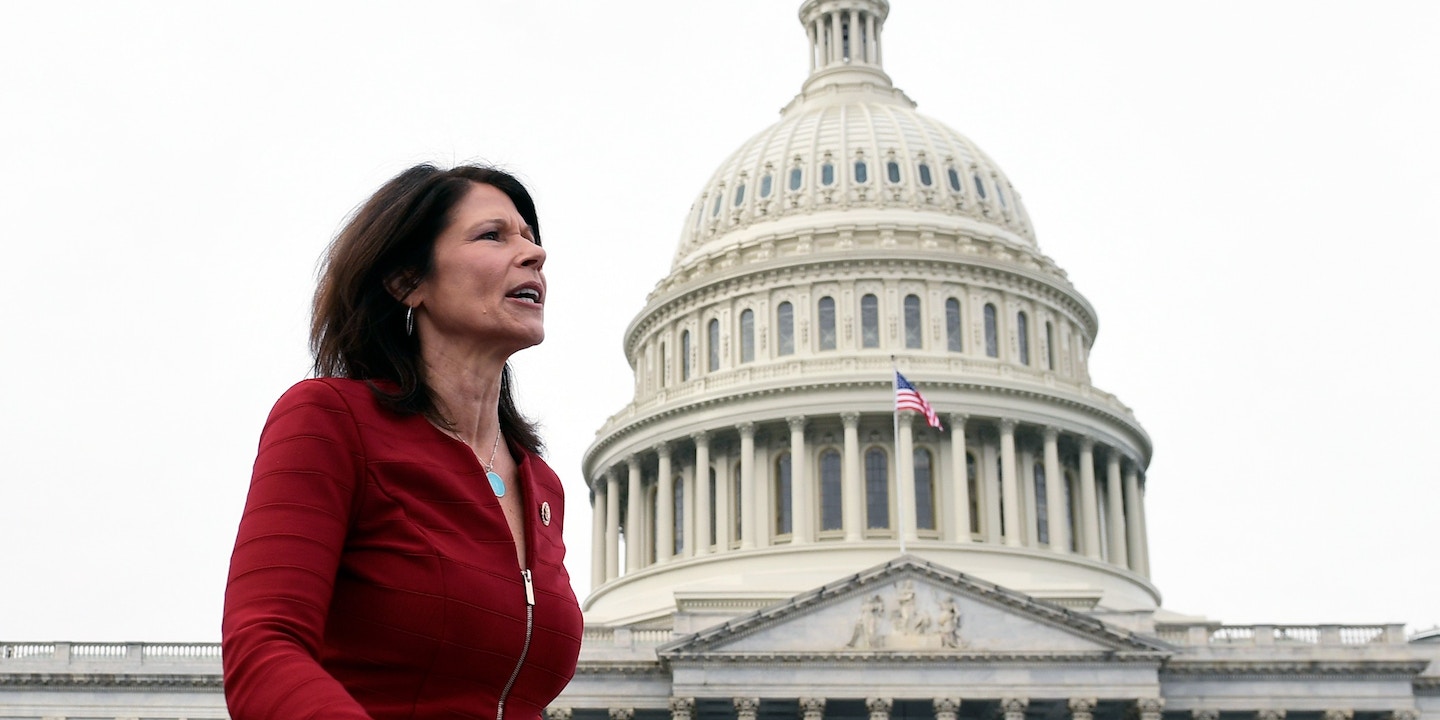 The former chair of the Democratic Congressional Campaign Committee, Rep. Ben Ray Luján, suggested Wednesday that the DCCC’s new policy to cut off vendors that work with primary challengers could undermine party unity, distancing himself from the controversial move.

“I think different leaders have different approaches,” Luján, who is running for a U.S. Senate seat in New Mexico, said in an interview with The Intercept.

“The work that I always did during the four years that I was at the DCCC, I did my very best to bring together the Progressive Caucus, the New Dems, and the Blue Dogs,” Luján said, referring to the Congressional Progressive Caucus and two centrist, Wall Street-friendly caucuses. “Everyone participated in our leadership efforts. And really, the success that we had not only in flipping nine seats in 2016 and 43 seats in 2018, it’s because the entire [Democratic] caucus was a part of it. So I think it’s always important to bring people together and make sure that we’re all working together. And celebrating the diversity of ideas that we have. But in the end, we all have to be on the same team.”

The DCCC released its new policy in late March, requiring firms that signed up to be vendors with the committee to agree to a set of terms that included agreeing not to work with any candidates challenging incumbents. Last week, leaders of the Progressive Caucus blasted the new policy in a meeting with DCCC Chair Cheri Bustos. Yet she isn’t backing down, even as opposition to the policy has mushroomed with outside progressive groups, as well as high-profile Democrats condemning it.

The consultant policy is a flashpoint in a larger debate over the future of the party, which pits two theories against each other. From the perspective of the DCCC, defending incumbents from the threat of primaries, even in deep-blue districts, is central to its mission. Progressives argue, however, that the DCCC’s squelching of internal debate results in a party unable to generate enthusiasm outside of wave years produced by anger at Republicans. For the DCCC, the party is good enough as it is. For a new wave of insurgents, only by reinventing itself can the party confront the twin, intertwined threats of a radicalized GOP and looming climate disaster — and time is running out.

Asked if he thought the DCCC should change the policy in light of calls from the Progressive Caucus to do so, Luján said, “You should talk to the chairwoman about that.” After we reached out to the DCCC, Luján’s spokesperson Lauren French contacted us and said Luján’s comments were “not in any way passing judgement on the chairwoman or this policy, merely explaining what he did.”

“I’m a progressive, and I’m concerned.”

Rep. Ted Lieu, the DCCC’s former vice chair for California and current vice chair of House Democrats’ LGBT Equality Caucus, said he was not consulted on the new policy. “This is a conversation with the chairwoman and some of the progressives. I’m a progressive, and I’m concerned,” he said, declining to comment further.

Reps. Ayanna Pressley of Massachusetts and Alexandria Ocasio-Cortez of New York slammed the policy on Twitter. “The fact that I challenged an incumbent meant a lot of folks were told not to come anywhere near my campaign,” Pressley wrote. “But I was lucky to build a dynamic, innovative team of staff & consultants who understood the challenges our campaign faced, and who were willing to take a risk. Without their willingness to go against the status quo – it’s very possible that I wouldn’t be in Congress,” she added. “The lesson of 2018 is that our party is made stronger by the inclusion of diverse, disruptive candidates and vendors who bring different perspectives and experiences.”

Ocasio-Cortez said the policy was “extremely divisive & harmful to the party” and encouraged small-dollar donors to “pause your donations to DCCC & give directly to swing candidates instead.” Ocasio-Cortez, in working to build an alternative funding structure independent of the DCCC, raised money from supporters for several freshmen known as “front-liners,” meaning that they are facing competitive races next fall.

One of those was Rep. Jahana Hayes of Connecticut, who told The Intercept that she also disagreed with the DCCC policy. “I’ve always been clear about that. These seats are not anointed or appointed,” she said. “I have to work hard for it every single time, and if anybody ever wants to run, they should have the ability to do so.”

Hayes said the change was “not something that I personally would support, just based on the fact that everybody has the right, if they think they can be impactful, to run. As an incumbent, I appreciate the protection of incumbents, but I also recognize that I just have to do a really good job so that people on the other side see that and will continue to vote for me and support me.”

Arizona Rep. Raul Grijalva, who is a chair emeritus for the CPC, said the policy would be a mistake for the party. “I was a nonendorsed DCCC candidate when I won the first time. My opponent was, but I wasn’t,” he said. ”When you set absolutes like that, it tends to cause problems.”

Michigan Rep. Debbie Dingell, a vice chair for the CPC, said she wanted to attend the meeting with Bustos but wasn’t included. Asked what she thought of the policy, she told The Intercept, “It’s complicated.”

“I’m having lots of conversations with people,” Dingell said. “And my quote of the day is Maya Angelou. People won’t remember what you said, but they’ll remember how you made them feel.”

Dingell said she was focused on bringing the Democratic caucus together. “I think we’ve gotta spend time as a caucus getting to know each other. You can tell I’m the child — I’ve now decided that I will openly admit — you can tell I’m the child of an alcoholic or a drunk ’cause I try to bring everybody together. That’s what I’m focused on right now.”

Rep. Joe Kennedy III, another CPC member, said the most important thing for the party is “to get the best candidates out there to run these big races. I think we’ve seen strong candidates come forward and succeed in primaries. And the most important part is that we’ve got a delegation in the caucus that is gonna be best suited to represent those districts, so we can do what we need to do to keep the majority and keep working for the American public.”

California Rep. Eric Swalwell, who won a 2012 primary, running a generational challenge, largely from the right, against Rep. Pete Stark, told The Intercept that the DCCC policy is “not what I would do. I’ll just leave it at that.”

Georgia Rep. Hank Johnson, who ran a primary to the right of former Rep. Cynthia McKinney in 2006 and won, said the policy “seems like an undue restraint on trade — and perhaps it is not fair to a representative democracy that depends on vitality of the election process.”

Blacklisting consultants, he said, is taking it too far. “It’s no fault on the part of a vendor for working for a candidate. Candidates who oppose incumbents should not be deprived of the opportunity to engage the services of professionals who work pretty much as hired guns. Consultants work for whoever is paying, it’s nothing personal. So perhaps this rule might go a little too far,” he said.

CBC PAC Chair Gregory Meeks of New York said the caucus was working on figuring out how to resolve internal disputes over the policy. “I think that’s going to get resolved, we just got to work a little. You know everybody is trying to talk to their districts, that’s what’s happening,” he told The Intercept. “We’re going to have conversations in that regard, and we’re going to figure this thing out.”

Asked if he thought the policy should change, Meeks said he would withhold his personal opinion, but said CBC members would talk among themselves. “We got to figure out, how do we speak with one voice and not just this caucus, as opposed to that caucus? So let us have that dialogue, and then I think that it’ll be more united as to what we are and where we are as a caucus,” Meeks said. “When I talk to folks on both sides, I think that there is a sweet spot that we can really have a conversation. I hear the concerns of both, and we can get it done.”

Critics of the policy are taking aim not only at the DCCC as an organization, but also at Bustos’s ability to lead it. A senior member of the Congressional Black Caucus told the Intercept that after meeting with colleagues last week, they “sensed there was a great deal of dissatisfaction with Bustos’s leadership” and weren’t “sure how long she’ll last.”

Despite opposition within the House, party leaders, including House Speaker Nancy Pelosi, are standing firmly in support of the committee’s new policy. Reps. Cedric Richmond, James Clyburn, Alcee Hastings, William Lacy Clay, and G.K. Butterfield all told The Intercept that they support the policy. Asked why he liked the policy, Hastings said, “I’m an incumbent. So if someone were to attack me, I’d be happy to know that the DCCC is not going to be involved with them. We’ve had a few things go askew, but generally speaking, it would be best for that particular organization to stay out of primaries,” he said.

DCCC spokesperson Cole Leiter told The Intercept that the policy is in line with the committee’s goal of protecting the party’s majority in the House. “When Chairwoman Bustos was running to lead the DCCC, she stood up in front of her colleagues and made a promise to stand with and protect every Member of the most diverse caucus in Congressional history as we work to defend and grow our Democratic majority,” Leiter said in a statement. “This transparent policy follows through on that exact promise and will protect all Members of the Democratic Caucus – regardless of where they fall within our big tent.”

Correction: April 25, 2019
A previous version of this article misstated Rep. Ted Lieu’s affiliation with House Democrats’ LGBT Equality caucus, of which he is a vice chair.