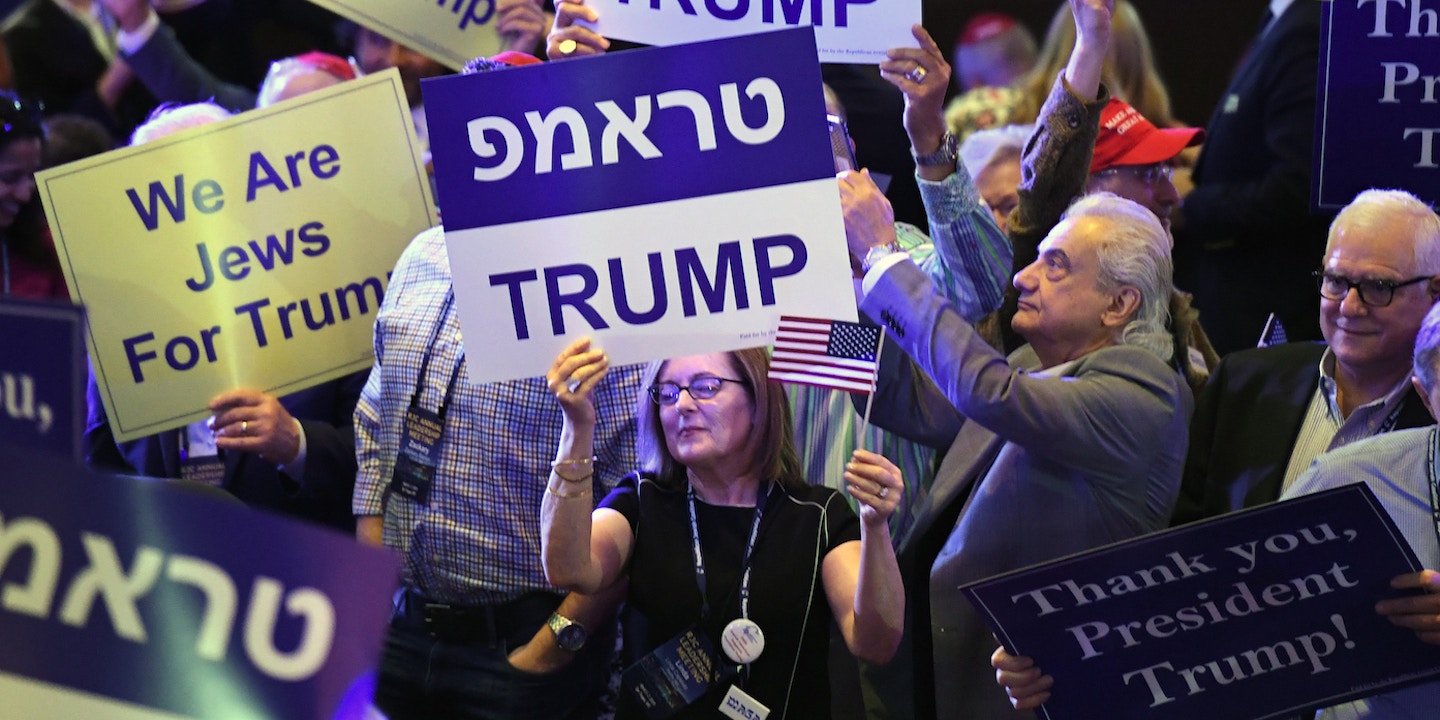 Given that Trump was speaking to Jewish Republicans — including Sheldon Adelson, the American casino magnate who is one of Netanyahu’s biggest donors — the president was not wrong to assume that the crowd was strongly pro-Israel, but the accusation that the loyalty of non-Israeli Jews to their home countries is somehow suspect has a long, ugly history.

Later in his address to the Republican Jewish Coalition gathering, Trump referred a second time to American Jews as if they were Israelis by saying that a victory for Democrats in the 2020 election “would cripple our country and very well could leave Israel out there all by yourselves.”

Several journalists expressed discomfort as Trump went on to suggest that his Jewish supporters should explain “to some of your people” in business and finance that they should stop opposing his imposition of tariffs on imported goods.

Trump at RJC keeps talking about "some of your people" and "many of your people" when discussing business and tariffs which, apparently, Jews somehow have a special interest in

For a bunch of reasons I found Trump’s use of “your prime minister” less alarming then his use of the 2nd person here: “Maybe you could explain that to some of your people who say ‘Oh we don’t like tariffs’.”

Trump’s remarks earned him a rebuke from the head of the Anti-Defamation League, Jonathan Greenblatt, who urged the president “to avoid language that leads people to believe Jews aren’t loyal Americans.”

The president’s comments were particularly striking because they came just minutes after he mocked Rep. Ilhan Omar, a Minnesota Democrat, for her criticism of Israel. Last month, the ADL accused Omar of using “a vile anti-Semitic slur” after she said, in defense of her right to criticize Israeli policies, “I want to talk about the political influence in this country that says it is OK to push for allegiance to a foreign country.”

Omar denied that she had questioned American Jews’ allegiance to the United States, saying that she objected to something different: political pressure on her, from Democrats as well as Republicans, to express loyalty to Israel. “I should not be expected to have allegiance/pledge support to a foreign country in order to serve my country in Congress,” Omar wrote in a Twitter thread. “I have not said anything about the loyalty of others, but spoke about the loyalty expected of me.”

I'm sure all the Republicans who took Rep Omar to task will be right on criticizing this use of the dual loyalties trope... https://t.co/sgjxyRFUs7

As Nathan Thrall explained in the New York Times Magazine, Omar’s comments came after Republicans in Congress introduced the Strengthening America’s Security in the Middle East Act of 2019, which endorsed “legislation adopted in more than two dozen states that denies state contracts to or bars state investments with American individuals or groups who support boycotts of Israel or who refuse to sign oaths affirming they will not boycott Israel.”

Trump’s attack on Omar came just one day after the FBI announced the arrest of a 55-year-old man who had called the representative’s office and threatened to “put a bullet in her fucking skull.”

My Lord, forgive my people for they do not know. https://t.co/mtEzMrCLKF

The investigation into this threat was aided by the fact that the man who made it, Patrick Carlineo, gave his name and number to the congressional aide who answered his call. Carlineo told a federal agent, who found two guns in his upstate New York home, that he “loves the president.”

Trump’s apparent confusion about the loyalties of his Jewish-American supporters might also be seen as proof that Israel’s ethno-nationalist prime minister has succeeded in one of his principal aims: blurring the line between Jewish and Israeli identity. The president’s casual assumption that Republican Jews are represented by Israel’s prime minister has clear racist undertones, but it is hard to argue that Israeli and American politics are not intertwined when Israel is represented in Washington by Ambassador Ron Dermer, a Florida native and former Republican operative whose father was a conservative Democratic mayor of Miami Beach.

Trump was also criticized for invoking anti-Semitic stereotypes when he addressed the Republican Jewish Coalition as a candidate, in 2015. On that occasion, early in the Republican primary when Adelson and other donors were supporting his rivals, Trump told the Jewish group: “You’re not gonna support me even though you know I’m the best thing that could ever happen to Israel … because I don’t want your money.”

“You don’t want to give me money,” he added, “you want to control your own politician.”

Video of this year’s event showed that the strongly pro-Trump crowd cheered many of his remarks, particularly when he boasted of permitting Israel to break international law by annexing the Golan Heights, Syrian territory seized by Israeli forces in 1967 and occupied ever since.

Trump’s strong support for Israel’s ongoing occupation of the Golan Heights, the West Bank, East Jerusalem, and Gaza has thrilled supporters of Netanyahu’s far-right government, but it prompted a protest at the start of the president’s speech on Saturday by members of If Not Now, a group of young Jewish-American progressives who chanted: “Jews are here to say, Occupation is a plague,” and “Jews are here to say, white nationalism is a plague.”

Freedom and dignity for all!