“Ink,” a play about Rupert Murdoch, reveals his tactic of disruption by proxy. He lurks in the background as his employees spread far-right ideas. 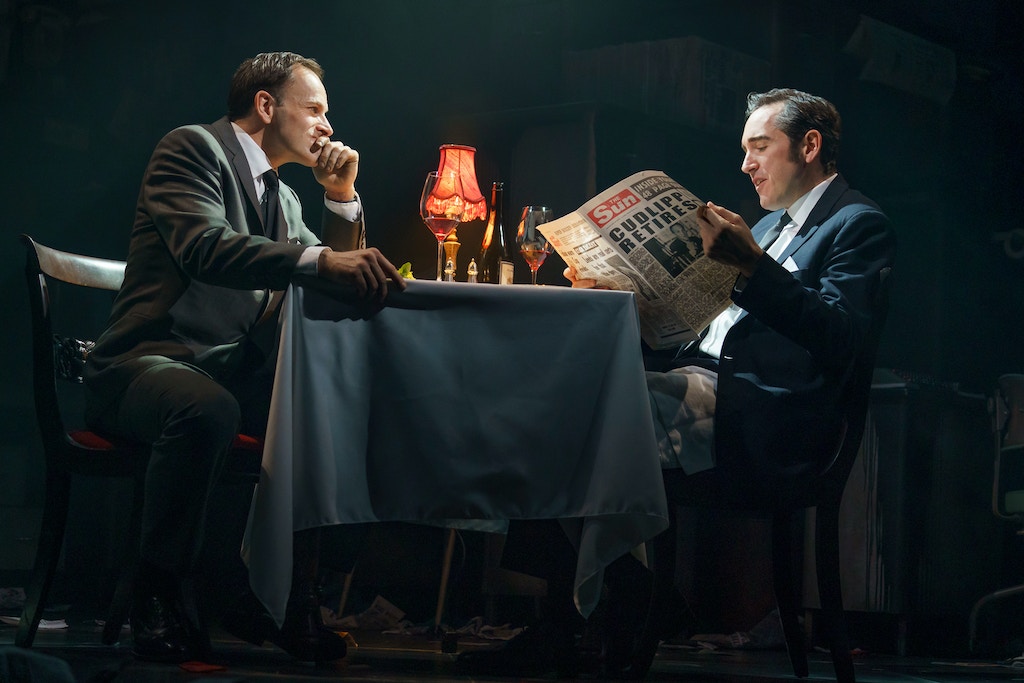 A scene from the play “Ink,” featuring Jonny Lee Miller as Larry Lamb, left, and Bertie Carvel as Rupert Murdoch.

Rupert Murdoch holds a knife in his hand. He sits in a posh restaurant, praising the virtues of doing as he pleases.

“I like moving around, never in one place long enough,” he says, a napkin tucked into his collar to catch the drippings from a nearly raw steak he consumes. There is a flash of steel from the knife, which he points with menace at a dining companion. “Isn’t that the joy of a hotel? You can check in, turn it over, spill a glass of wine, take a shit in the toilet, fuck in the bed, make a mess, and then leave. And someone else cleans it up after; isn’t that wonderful?”

This conversation is taking place 40 feet from where I sit, though I should clarify that an actor is playing Murdoch, and another actor is playing the editor of one of his British tabloids, The Sun. The relationship between the two — the powerful master and his willing surrogate — is explored in a play called “Ink” that opens this week on Broadway. If you want to understand the mentality of the multibillionaire who has done more than any other person to spread far-right extremism in America, you should see this play, though it stumbles before the considerable task of exposing in its fullness the harm machine that is Keith Rupert Murdoch.

How, after all, does one capture in a play or a movie — or even a book that doesn’t gallop past 500 pages — the long life and dismal work of this 88-year-old mogul? At the age of 21, when his father died, Murdoch inherited two small newspapers in Australia and spun them into a media empire in his native land. He then moved to England and acquired more assets there, including the flower of the establishment, the Times of London, while creating from scratch a satellite television network. His media properties were instrumental in the rise and fall of several prime ministers, and they played a key role in fomenting the nationalist ire that led to Britain voting to leave the European Union. One of his newspapers, the News of the World, also engaged in a criminal campaign of hacking into the voicemails of celebrities, members of the royal family, and ordinary citizens; this led to a parliamentary committee declaring Murdoch unfit to run a major corporation.

And we haven’t even gotten to America and Fox News, which Murdoch founded in 1996.

The strength of “Ink” is that it reveals a key tactic of Murdoch’s: disruption by proxy. The play’s main character isn’t really Murdoch but Larry Lamb, the chip-on-his-shoulder journalist hired to turn the boring Sun into a sensationalist tabloid. Although Murdoch enjoys visiting his newsrooms, he is not the editor-in-chief of any of his publications; he appoints the people who are, in essence, his shock troops. “Find people like you,” Murdoch instructs Lamb, who is building a new staff for The Sun. “The spurned, the spited, the overlooked; gather ’em up, throw ’em in. A ship of undesirables.” 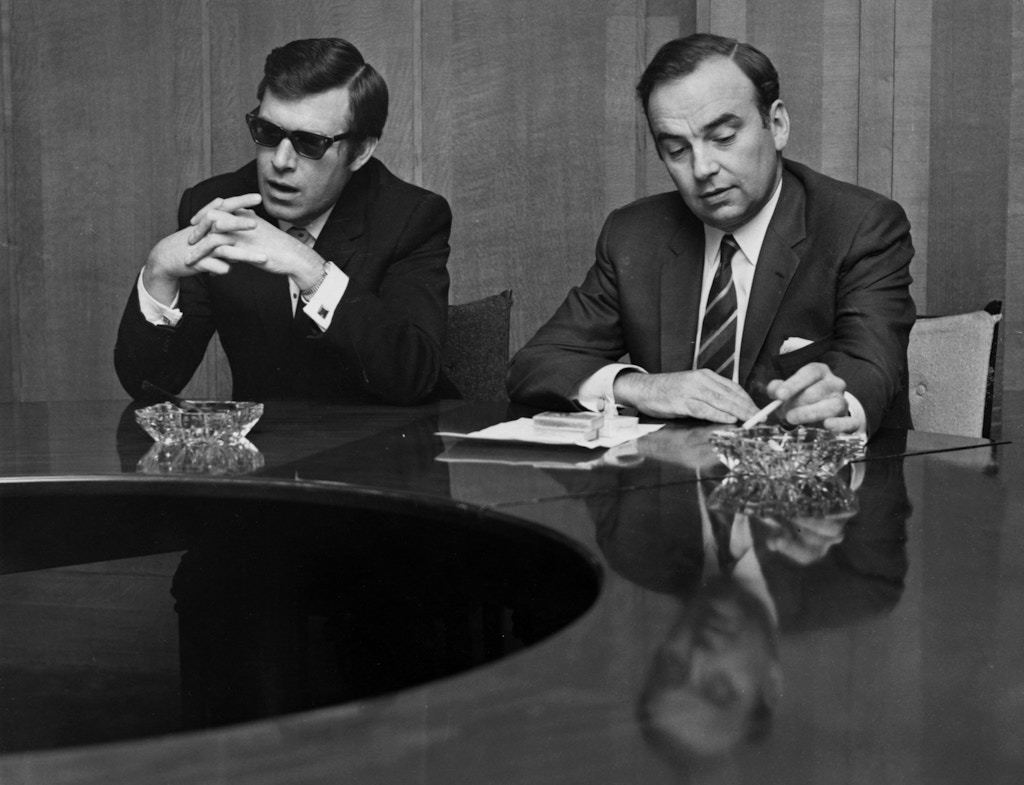 Larry Lamb, left, at a press conference at the News of the World offices with Rupert Murdoch on Oct. 25, 1969.

This tactic is magical for Murdoch because the “undesirables” are tagged with calumny, not him. When we think of Fox News and its toxic impact, we think of its headliners: Sean Hannity, Laura Ingraham, Tucker Carlson, Jeanine Pirro, Lou Dobbs. The man whose fortune started the network, who appointed the executives who made Fox an engine of right-wing hate, who has made a good deal of money from all of this and could turn it around in an instant if he wished — would you recognize Rupert Murdoch if he shuffled past you on the street? Two films are being released this year about Fox News but both focus on Roger Ailes, the former chief executive of the network who was forced to resign in 2016 in a sexual harassment scandal. Ailes, who died in 2017, casts a longer cinematic shadow in death than his boss casts in life.

We want our villains to behave like villains, and Ailes is perfect for the role: He was physically unattractive, he was known before his downfall to berate his underlings, and he said foul things in public, as well as private. Murdoch’s advantage is that he stayed in the bleachers of his most odious project, letting Ailes, Hannity & Co. take the heat, while pursuing respectable ventures that gained the approval of his peers in the business world, such as turning 21st Century Fox into an entertainment juggernaut that Disney Corp. just bought for $71.3 billion. Of course, it shouldn’t come as a surprise that in plutocratic America, a man’s reputation is measured by the size of his fortune rather than the depravity of his politics.

“Ink” — written by British playwright James Graham, who in 2016 wrote another political play that was a Snowden-esque look at privacy — focuses on a single year in Murdoch’s life, when he bought The Sun in 1969 and turned its focus to crime, sex, and anything else that would sell copies. The play opens with an idea: Lamb tells Murdoch that asking why something happens is unhelpful; it suggests that there is a plan or a point to things, whereas often there is not. The only thing worth asking, Lamb continues, is: “What next?” Murdoch listens and smiles; he recognizes his purpose in these words.

Murdoch’s politics are notoriously conservative, but there’s always been an aura of incoherence to what he’s sought and what he’s wrought. He mocked Donald Trump’s presidential aspirations until it became clear that Trump was going to be the Republican nominee, and then he fell in line. Murdoch now regularly advises the president, and Fox News is state TV. He was famously a crucial supporter of U.K. Prime Minister Margaret Thatcher, a leader of the Tory Party, but he later supported, crucially again, Prime Minister Tony Blair, a leader of the Labour Party. A recent investigative epic by the New York Times Magazine (“How Rupert Murdoch’s Empire of Influence Remade the World”) suggested that it’s been all about the Benjamins, and that Murdoch sought political influence to gain the sorts of regulatory favors that turn millionaires into billionaires and billionaires into multibillionaires (he’s now worth more than $7 billion, and his six children have about $12 billion between themselves).

“Ink” presents Murdoch as a rascally narcissist, a proponent of destruction for destruction’s sake. In one of the play’s best scenes, Murdoch tells Lamb that he wants to burn down the established newspapers, to which Lamb warns, “There’ll be a lot of blood.” Murdoch’s reply is growled with hunger: “God, I hope so.”