In Case Brought by School Speech Pathologist, Texas Federal Court Becomes the Third to Strike Down Pro-Israel Oath as Unconstitutional

A federal court in Texas issued a ruling on Thursday afternoon preliminarily enjoining enforcement of Texas’ law banning contractors from boycotting Israel. The court ruled that the law plainly violates the free speech guarantee of the First Amendment. Following similar decisions by federal courts in Kansas and Arizona, the ruling becomes the third judicial finding – out of three who have evaluated the constitutionality of such laws – to conclude that they are unconstitutional attacks on the free speech rights of Americans.

The case was brought by Bahia Amawi, a longtime elementary school speech pathologist in Austin, Texas, whose contract renewal was denied due to her refusal to sign an oath certifying that she does not participate in any boycotts of Israel. In December, The Intercept was the first to report on her case and the lawsuit she brought, and also produced a video documenting her story:

Amawi, a U.S. citizen and mother of four U.S.-born children, was required to sign the pro-Israel oath due to a new law enacted with almost no dissent by the Texas State Legislature in May 2017, and signed into law two days later by GOP Gov. Greg Abbott. When signing the bill, Gov. Abbott proclaimed: “Any anti-Israel policy is an anti-Texas policy.”

But this was precisely the mentality, along with the virtually unanimous pro-Israel sentiment in the Texas State Legislature, that the Texas federal judge identified when explaining why the pro-Israel oath so blatantly violates the free speech guarantees of the U.S. Constitution’s First Amendment:

In Texas, only five legislators voted against H.B. 89. (Texas Resp. Mots. Prelim. Inj., Dkt. 25, at 4). Texas touts these numbers as the statute’s strength. They are, rather, its weakness. “If there is any fixed star in our constitutional constellation, it is that no official, high or petty, can prescribe what shall be orthodox in politics, nationalism, religion, or other matters of opinion or force citizens to confess by word or act their faith therein.” W. Virginia State Bd. of Educ. v. Barnette, 319 U.S. 624, 642 (1943). “[T]he purpose behind the Bill of Rights, and of the First Amendment in particular[,]” is “to protect unpopular individuals from retaliation—and their ideas from suppression—at the hands of an intolerant society.” McIntyre v. Ohio Elections Comm’n, 514 U.S. 334, 357 (1995).

Thus, “our citizens must tolerate insulting, and even outrageous, speech” in public debate. Boos, 485 U.S. at 322. They must do so “in order to provide ‘adequate breathing space’ to the freedoms protected by the First Amendment.” Id. (citing Hustler Magazine, Inc. v. Falwell, 485 U.S. 46, 56 (1988)). With H.B. 89, Texas compresses this space. The statute threatens “to suppress unpopular ideas” and “manipulate the public debate through coercion rather than persuasion.” Turner, 512 U.S. at 641. This the First Amendment does not allow.

The ruling, issued by U.S. District Court Judge Robert Pitman, categorically rejected each of Texas’ justifications for the law. Judge Pitman was particularly emphatic that the law was not merely “government speech” in defense of Israel, but rather a classic embodiment of what the First Amendment, at its core, was designed to prevent: punishment imposed on those who disagree with the majority’s political opinions on hotly contested political topics. The attack on free speech, explained the court, was manifest from the text of the law itself:

It is a content- and viewpoint-based restriction on speech. It is a content-based restriction because it singles out speech about Israel, not any other country. And it is a viewpoint-based restriction because it targets only speech “intended to penalize, inflict harm on, or limit commercial relations specifically with Israel, or with a person or entity doing business in Israel or in an Israeli-controlled territory.” Tex. Gov. Case 1:18-cv-01091- . . . [T]he Court finds that H.B. 89’s plain text, the statements surrounding its passage, and Texas’s briefing in this case reveal the statute to be a viewpoint-based restriction intended not to combat discrimination on the basis of national origin, but to silence speech with which Texas disagrees. First, the plain text: H.B. 89 singles out content and viewpoint for restriction. With respect to content, the statute targets only boycotts of Israel; Texas contractors remain free to boycott Palestine or any other country.

Much of the court’s reasoning relied upon the landmark 1982 U.S. Supreme Court decision in NAACP v. Clairborne Hardwarde Co., which rejected attempts by the state of Mississippi to hold state NAACP leaders liable for property damage done to stores by the NAACP activists’ boycotts. Their property destruction, claimed Mississippi, was “incited” and “inspired” by the inflammatory rhetoric of NAACP leaders. The Supreme Court unanimously rejected those attempts on the ground that, as the Texas court put it, “the desire to not purchase certain products is distinctly protected in the context of a political boycott,” and nobody can be punished for the “consequences” of protected First Amendment activities, including theories that their speech “inspired” or “incited’ others to take action.

Just as those NAACP leaders in Mississippi could not be punished by the state for the consequences of their political speech advocating boycotts (because boycotts are core protected First Amendment activity), advocates of an Israel boycott may not be constitutionally limited, constrained, or punished in any way by the state as a result of their boycott activities. In sum, said the court, “plaintiffs’ BDS boycotts are speech protected by the First Amendment.”

What makes this ruling particularly important, aside from the fact that it comes from one of the largest states in the country, is that it completely rejected the most common (and most toxic) justification for these laws: that it is not designed to suppress speech or activism against Israel but rather to combat discrimination (namely, anti-Semitism or discrimination against Israelis).

The court treated this cynical argument with barely disguised disdain: “The statute’s plain text makes its purpose obvious: to prevent expressive conduct critical of the nation of Israel, not discriminatory conduct on the basis of Israeli national origin. Texas points to no authority indicating that such a purpose is a legitimate or compelling aim of government justifying the restriction of First Amendment freedoms.”

Such laws are indisputably designed to outlaw and punish political activism that lies at the heart of the First Amendment’s free speech guarantee. As the court adeptly described the targeted political activism: “The BDS movement—referring to boycotts, divestment, and sanctions—arose in response to Israel’s occupation of Palestinian territory and its treatment of Palestinian citizens and refugees.” It is “[m]odeled after the South African anti-apartheid movement” and “seeks to pressure the Israeli government to end its occupation of the West Bank, Gaza, and Golan Heights, end discrimination against Arab/Palestinian citizens of Israel, permit Palestinian refugees to return to their homes, and otherwise comply with international law.”

As The Intercept has often documented, the attempt to criminalize or otherwise outlaw activism against the Israeli government is easily one of the greatest threats to free speech both in the U.S. and the West generally, if not the single greatest threat. The anti-BDS laws in particular have been rapidly proliferating in the U.S., directly threatening core free speech rights of American citizens in the name of protecting a foreign country.

As this map, previously published by The Intercept and prepared by Palestine Legal, illustrates, and as the court correctly observed, “twenty-five states have enacted legislation or issued executive orders restricting boycotts of Israel,” and “in every state to consider such legislation, the proposed measures have passed by considerable margins.” 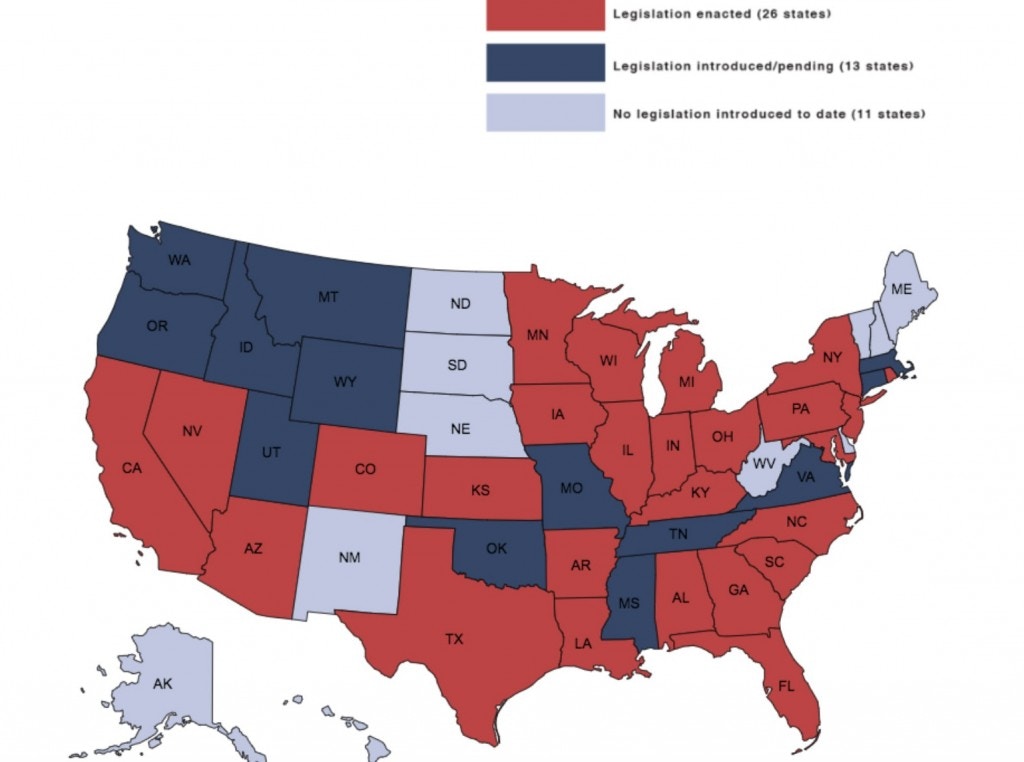 The original lawsuit challenging the statute was brought on behalf of Amawi by lawyers for the Council on American-Islamic Relations (CAIR). Ultimately, ACLU lawyers joined the lawsuit when other plaintiffs also punished by the law were added, including John Pluecker, whose academic contracting work with the University of Houston was denied due to his refusal to sign the pro-Israel oath, and George Hale, who reluctantly signed the oath due to his need to work as a radio reporter with an NPR-affiliated station licensed to Texas A&M and who was told that he would not even be permitted to sign his contract by including a notation that he was signing under duress and in opposition to that oath.

In responding to the ruling, Terri Burke, executive director of the ACLU of Texas, said of the prohibited activism against Israel: “By any name, that’s free speech and free speech is the north star of our democracy. It’s foundational, and this decision underlines that no issue of importance can be addressed if the speech about it is stymied, or worse, silenced.” Pluecker, the plaintiff whose work with the University of Houston was denied due to his refusal to sign the oath, said: “People in Texas need to know that our ability to earn our livelihoods won’t be threatened by the state because of our political positions.”

These three rulings from federal courts in Kansas, Arizona, and now Texas technically apply only to the specific districts in which these courts sit. But they give clear judicial momentum to an ultimate finding that these still-proliferating laws are direct infringements of the core rights guaranteed by the U.S. Constitution.

Leading politicians continue to support such laws. One of the most vocal proponents is the Democratic Governor of New York Andrew Cuomo, who boasted in a tweet: “If you boycott Israel, New York State will boycott you.” That tweet touted a Washington Post Op-Ed written by the governor justifying his executive order to boycott any companies that boycott Israel – even though Cuomo himself had ordered a boycott of two American states (Indiana and North Carolina) to protest their anti-LGBT laws. And as The Intercept reported in January, the very first bill the new Chuck-Schumer-led U.S. Senate considered was one to bolster and endorse these state laws.

We thus now have a direct collision between, on the one hand, the attempts by elected political officials to please their pro-Israel constituencies by legally punishing anyone who boycotts Israel (while allowing boycotts of other countries or even states within their own country) and, on the other, court rulings decreeing that such attempts are attacks on free speech rights.

If the First Amendment was designed to do anything, it was to ensure that the latter attempt prevails over the former. This latest ruling by a Texas federal court is a major vindication of this pro-free-speech principle.