How Rep. Ro Khanna Got a Price-Gouging Defense Contractor to Return $16.1 Million to the Pentagon

As a freshman, Khanna asked the Defense Department’s inspector general to look into Transdigm, a defense contractor with a monopoly over spare parts. 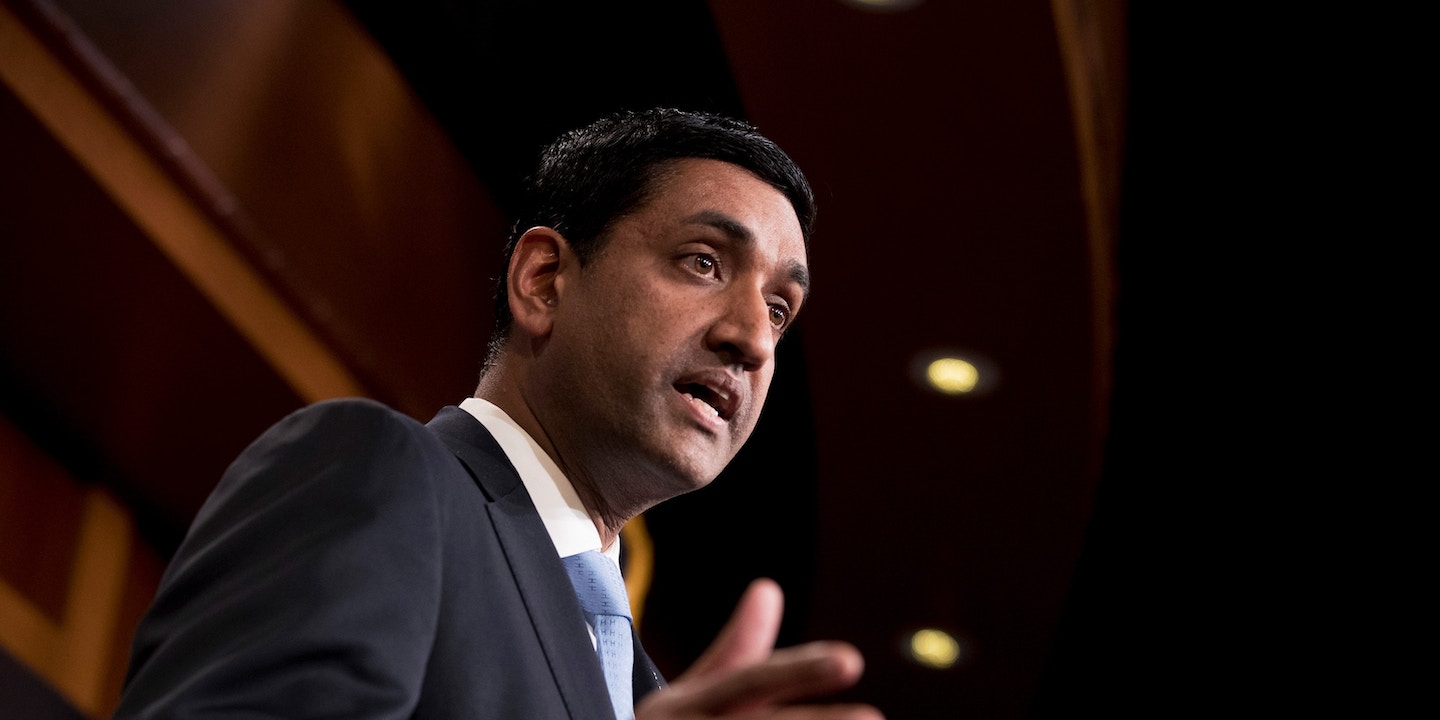 Just before Memorial Day, embattled defense contractor TransDigm agreed to return $16.1 million in excess profits to the Department of Defense. The refund was remarkable, a rare example of what congressional oversight can accomplish.

TransDigm wasn’t required by law to reimburse the Pentagon, and it didn’t cough up the dough at the behest of regulators. It returned the money after a damning report from the Defense Department’s inspector general, showing profit margins as high as 4,451 percent on sole-source spare parts. And it did so after a contentious House Oversight Committee hearing two weeks ago, where members of both parties — from freshmen progressives Alexandria Ocasio-Cortez and Rashida Tlaib to Freedom Caucus leaders Mark Meadows and Jim Jordan — demanded payback.

In other words, TransDigm paid $16.1 million because powerful people asked them to. “We saved more money today for the American people than our Committee’s entire budget for the year,” said House Oversight Committee Chair Elijah Cummings, D-Md., in a statement.

TransDigm paid $16.1 million because powerful people asked them to.

Rep. Ro Khanna, D-Calif., chaired that hearing. For him, it was the culmination of two years of work on TransDigm, which started when he was a freshman member of the minority party in the House. His successful fight to hold an egregious monopolist accountable for price-gouging reveals the kind of power members of Congress can wield, if they choose to wield it. At a time when much of Congress has gone out of its way to make itself irrelevant, fulminating about the corruption and obstruction of the Trump White House but unwilling to do much about it, it’s worth pausing to look at the type of investigation the legislative branch is capable of — and used to routinely perform, to great success.

“I have found being in Congress to be an extraordinary opportunity to impact our nation and world,” Khanna said in an interview with The Intercept last week. “You have to be willing to do your homework and be active in using the procedures we have.”

Just a couple months into Khanna’s first House term, he had coffee at a Capitol Hill-area Starbucks with Matt Stoller, author of the forthcoming book “Goliath” and a fellow at the Open Markets Institute, which at the time was housed at the New America Foundation. Stoller informed Khanna about some revelations that had been bubbling up among short seller Citron Research and the subscription-based investigative news site The Capitol Forum.

TransDigm, the subject of the reports, was more of a private equity conglomerate than a defense manufacturer. It used mergers to roll up exclusive rights to sole-source aircraft parts. TransDigm’s 2016 annual report stated, “about 80% of our sales come from products for which we believe we are the sole source provider.” Armed with that market power, critics claimed it jacked up prices, particularly for defense buyers, which made up about one-third of TransDigm’s sales.

A Capitol Forum analysis estimated some of these shifts using government data. Before being acquired by TransDigm, Whippany Actuation Systems sold a motor rotor for $654.46. Afterward, it was $5,474. Before acquisition, a Harco cable assembly was $1737.03; afterward, it was $7,863.60. The margins are exorbitant, but on fighter planes that can cost more than $100 million each, they didn’t raise much alarm inside the Defense Department.

With TransDigm having monopoly control over the spare parts, the Pentagon had no choice but to buy from them if they wanted their planes to stay in the sky. Sales personnel for TransDigm also allegedly structured contracts so they wouldn’t have to reveal cost information that would show the precise nature of the gouging, according to the reports.

TransDigm’s business model was lucrative, especially for its executives. In 2017, then-CEO Nicholas Howley took home $61 million in compensation, sixth-highest in the U.S. that year.

“Any time you raise questions about the corporate sector or a defense contractor, they will try to throw mud as a way to intimidate.”

Khanna got interested in the subject, and as a member of the House Armed Services Committee, he had oversight over defense procurement. So he did what he could as a member of Congress: He wrote a letter. Specifically, on March 21, 2017, he asked the inspector general of the Defense Department to investigate TransDigm. “Reports suggest that TransDigm Group has been operating as a hidden monopolist,” Khanna wrote. “Given that the Trump administration is proposing budget increases for the military, it is incumbent upon Congress to ensure that these increases provide for the common defense, rather than enrich a few individual financiers who stand to benefit at the expense of our troops and weapons systems.”

There was immediate backlash. A whisper campaign suggested that Khanna had a financial stake in seeing TransDigm’s stock falter. “Any time you raise questions about the corporate sector or a defense contractor, they will try to throw mud as a way to intimidate,” Khanna said. In addition, Wall Street analysts rode to TransDigm’s rescue, defending the stock as a “top pick” that was “the victim of its own success.” Several of these analysts worked for banks that handled TransDigm’s debt and had a stake in a successful outcome.

Khanna was undeterred, rallying support inside Congress for an investigation. Eventually, Sen. Elizabeth Warren, D-Mass., and Rep. Tim Ryan, D-Ohio, both of whom are running for president, joined the call for an audit of TransDigm’s purchasing. And in response, the inspector general decided to conduct a review.

The inspector general, in a report released this February, looked at a random sample of 47 parts TransDigm sold the government between January 2015 and January 2017. And sure enough, the study found that TransDigm earned an “excess profit” — defined as above a 15 percent margin — on 46 of the 47 parts. The margins ranged from 17 to 4,436 percent. The biggest markup came on a 3-inch “nonvehicular clutch disk” that cost $32 to make, which TransDigm sold for $1,443. The 46 parts, which totaled $26.2 million, produced an estimated $16.1 million windfall for the company. Overall, the inspector general found that procurement officers had little chance of determining whether they were overpaying for TransDigm parts. Nearly all the contracts were below the $750,000 threshold that would trigger mandatory cost information disclosures. (That threshold was increased to $2 million late in 2017, as a way to “reduce administrative burdens” on private businesses.) And when officials asked TransDigm for the cost data, sales agents denied the request in 15 of 16 cases. The only time TransDigm released data was when the contract was above the threshold and submission was required, and that was the only contract where TransDigm earned a “reasonable” profit, according to the inspector general.

“It was very vindicating,” Khanna said. “The report convinced everyone about how terrible this is.”

Cummings, the House Oversight chair, wanted hearings on TransDigm, and Khanna also happened to be a member of that committee. Investigators for the committee spoke with former TransDigm employees, who gave more information about TransDigm’s deliberate deceptions. One former sales director said, “We were coached not to provide cost data,” and that working with the Defense Department was like “taking candy from a baby.”

“Are you going to pay back the taxpayers of this country, yes or no?”

One after another, members of Congress asked TransDigm to return the $16.1 million. “Are you going to pay back the taxpayers of this country, yes or no?” asked Rep. Jackie Speier, D-Calif. Stein responded: “No. We are still evaluating and we have not come to a conclusion.” Other members gave TransDigm advice: Pay back the overcharges. “You’ve got a bipartisan Congress saying you should pay back,” Khanna told the TransDigm executives. “We in Congress can almost agree on nothing. It’s remarkable that we agree on this.”

It took TransDigm a little over a week after the pummeling to write the check to the Defense Department. This was a departure from past practice; in 2006, TransDigm was also found to have gouged the Pentagon, that time for $5 million, and the company never paid that back.

Ultimately, this is a minor sacrifice for TransDigm, a company valued at $1.2 billion whose stock has soared 32 percent this year. The payback was only on a portion of TransDigm contracts; from 2012 to 2017, the Defense Department issued the company 4,942 contracts worth $471 million. So a more fulsome study could have found hundreds of millions of dollars in excess profits; TransDigm mostly got to keep all that.

Still, for a freshman congressman in the minority to initiate a process that ends in a voluntary refund to the government is unusual. And lawmakers in both parties, Khanna said, are discussing legislation that would close loopholes and require sole-source parts manufacturers to disclose cost data in every case, regardless of the size of the contract. They also want to figure out how to diversify parts suppliers to end sole-sourcing. “Not a single person in the committee defended TransDigm,” sad Khanna. “I had the surreal experience of having Grover Norquist’s brother, the comptroller of the Department of Defense, agree with my efforts. There’s great anger and outrage over TransDigm’s conduct.” Khanna added that he has heard anecdotally that overcharges in the defense parts sector are not limited to TransDigm; the Government Accountability Office is investigating monopolization in military contracting.

What Khanna’s crusade shows is that members of Congress do have the power to create change, even without passing legislation. In this case, just speaking up to ask for an investigation of TransDigm set things in motion. “That single act triggered an entire process that culminated in senior members of Congress holding a hearing to hold TransDigm accountable, and having legal changes to close loopholes in the process,” Khanna said. “My personal experience highlights the extraordinary authority Congress has if we exercise influence. There’s a reason that Congress was created in Article I of the Constitution.”

Correction: May 28, 2019, 2:19 p.m. ET
A previous version of this article misstated the title of Matt Stoller’s forthcoming book.