The anticlimactic end of the Trump-Russia investigation is partly due to decades of bitter political battles over what powers to grant special prosecutors. 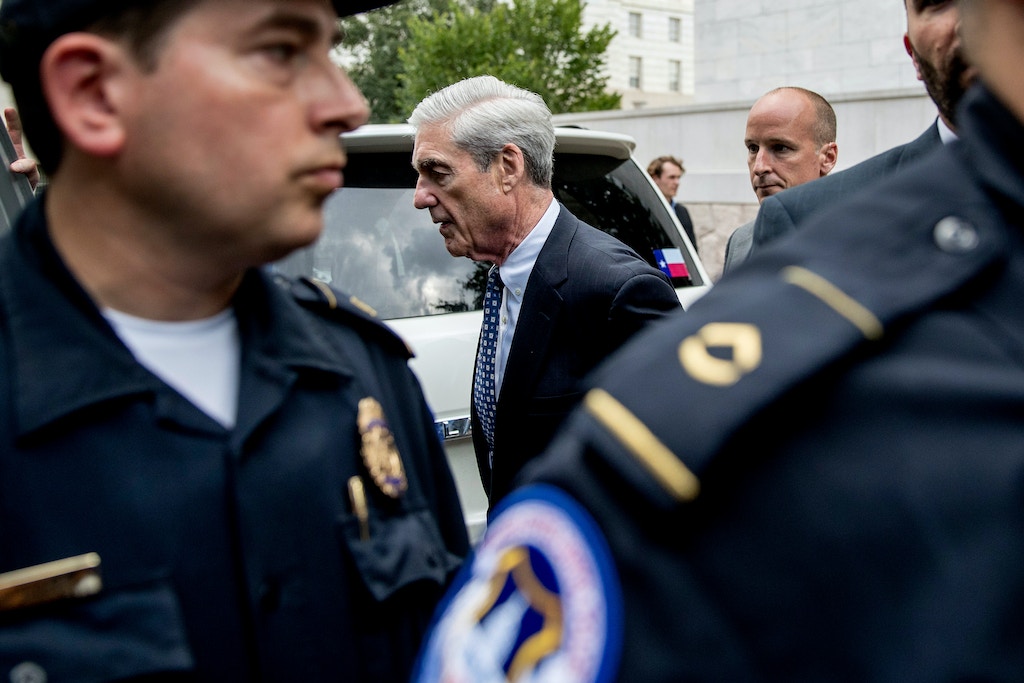 Former special counsel Robert Mueller departs after testifying in Washington, D.C., before the House Intelligence Committee and the House Judiciary Committee about his report on Russian election interference, on July 24, 2019.

The report said that CNN had obtained hundreds of pages of surveillance reports compiled for the Ecuadorian government by a Spanish security company, which showed that Assange, the founder of WikiLeaks, received “in-person deliveries, potentially of hacked materials related to the 2016 U.S. election, during a series of suspicious meetings” while he lived in the Ecuadorian embassy in London. “Assange met with Russians and world-class hackers at critical moments, frequently for hours at a time,” CNN reported. He “acquired powerful new computing network hardware to facilitate data transfers just weeks before WikiLeaks received hacked materials from Russian operatives.”

The CNN report — which appeared on a day when the Washington press corps was distracted by President Donald Trump’s racist tweets — was largely ignored. But with former special counsel Robert Mueller testifying before Congress on Wednesday, the little-noticed Assange story was yet another reminder that despite Mueller’s efforts, many important questions about the Trump-Russia case remain unresolved.

During his testimony before two House committees on Wednesday, Mueller provided terse answers to both Democrats and Republicans, largely sticking to his vow not to go beyond the written text of his report. He acted as if the report were the final word on the Trump-Russia matter.

But the truth is that Mueller pulled his punches in his report and left plenty of room for both the press and Congress to pursue the Trump-Russia case further. His grim Sergeant Friday-style testimony on Wednesday only reinforced the need for others to now pick up where Mueller left off.

Among other things, Mueller’s testimony, like his report, failed to answer the question of whether Trump should be prosecuted for obstruction of justice given the mountain of evidence gathered by Mueller and his prosecutors.

What’s more, Mueller stated in his report that he lacked enough evidence to bring charges in connection with possible coordination between Russian operatives and the Trump campaign that could have represented violations of campaign finance laws. Yet the report details many contacts between the Trump circle and Kremlin-connected Russians, while also acknowledging that Mueller’s investigators could not discern the significance of some of those contacts.

Mueller’s unresponsive testimony, like his hesitant report, suggests that Trump’s long, public campaign of intimidation against Mueller’s probe had an impact.

During his testimony, Mueller hinted that Trump’s unrelenting fight against him influenced at least one of his most important decisions during the two-year investigation. Mueller’s team never interviewed Trump himself, instead accepting written answers to questions. He didn’t even attempt to subpoena Trump to force him to testify. Asked about the matter Wednesday, Mueller admitted that he knew Trump would fight a subpoena and that would prolong his investigation.

Democrats had to take solace from a few lonely nuggets from Mueller, such as his restatement of the fact that Trump was not exonerated by his report, and that Trump could still be charged with obstruction when he leaves office.

One of the best exchanges of the day came in the second hearing, before the House Intelligence Committee. Rep. Adam Schiff, D-Calif., the committee’s chairman, asked Mueller whether it was accurate to say that Trump campaign officials “built their strategy, their messaging strategy, around those stolen documents,” meaning the Democratic emails and documents hacked by the Russians and released by WikiLeaks during the 2016 campaign.

“And then they lied to cover it up?”

But overall, Mueller turned in a cursory public appearance that indicated his eagerness to go back into retirement.

In addition to Mueller’s fatigue and Trump’s intimidation tactics, there is another little understood factor that helps explain why Mueller hewed to such a narrow approach in both his report and his testimony. The anticlimactic ending to the Mueller investigation can be seen as the product of decades of bitter fights between Democrats and Republicans over what powers should be granted to special prosecutors probing criminal acts by powerful government officials.

The result of this bipartisan exhaustion was an uneasy truce. When the law governing independent counsels came up for reauthorization in 1999, Congress let it expire. In its place, the Justice Department issued new rules that gave the attorney general much more control over appointing special counsels and over their investigations. One result is that special counsels today arguably have less independence and power to hold high officials accountable than the independent counsels of the past.

The Democratic-controlled House should pick up where Mueller left off and create a select investigative committee that consolidates all the House’s inquiries into Trump and Russia. That would mirror the way Congress handled Watergate. Long before Congress began impeachment hearings in the House, a select Watergate committee was created in the Senate to investigate the scandal. Its hearings captured the public’s attention and helped changed the nation’s attitudes about Nixon and his role in the Democratic National Committee break-in.

There’s a message for the press here too: Let Trump’s incendiary tweets speak for themselves, and look at the Mueller report as a road map for further investigation, not as the end of the story.