Eco-fascism has seen a notable reemergence among far-right groups and festering corners online in the U.S. and Europe. 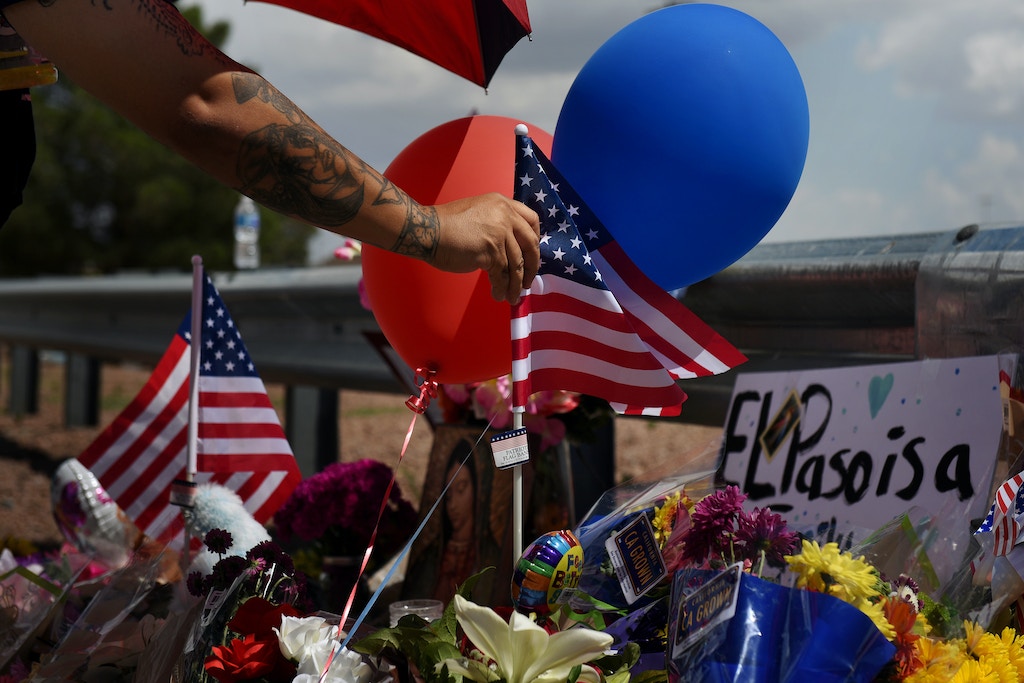 On Aug. 4, 2019, a man places an American flag on a makeshift memorial outside the Walmart store in El Paso, Texas, where a mass shooting occurred on the previous day.

The four-page manifesto believed to be written by suspected El Paso mass shooter Patrick Crusius abounds with Trumpian racist nationalism. “This attack is a response to the Hispanic invasion of Texas,” notes the text, published shortly before Saturday’s massacre. The manifesto, which decries “race-mixing,” states, “some people will blame the president or certain presidential candidates for the attack. This is not the case,” noting that the author’s convictions “predate Trump.” Commentators such as my colleague Mehdi Hasan are nonetheless right to place blame at the feet of President Donald Trump, whose putrid anti-immigrant rhetoric and policies have emboldened violent white supremacists.

Yet a number of motivations cited by the suspected attacker sit outside the typical remit of racist MAGA fearmongering. An entire paragraph of the manifesto is dedicated to environmental degradation and Malthusian claims about the need to “get rid of enough people” to protect ever dwindling resources. The author cites the Christchurch shooter’s lengthy manifesto, titled “The Great Replacement,” as an inspiration, reiterating the paranoid fears of demographic shift and white decline. The Christchurch shooter self-identified as an “eco-fascist,” writing, “there is no nationalism without environmentalism.”

Against the perilous climate change denialism typical of U.S. conservatives, environmental decimation is broadly seen as a liberal and left concern. But eco-fascism has seen a notable reemergence among far-right groups and festering corners online in the U.S. and Europe. While campaigning for the European elections, Marine Le Pen of France’s far-right National Rally party promised to make the “first ecological civilization” of a “Europe of nations,” claiming that “nomadic” people with “no homeland” do not care about the environment. Neo-Nazi Richard Spencer wrote in a 2017 manifesto, “We have the potential to become nature’s steward or its destroyer.”

It is beholden on those of us fighting for climate justice to ensure that not an inch is given to those who would use environmental degradation as grounds for racist nationalism.

It is beholden on those of us fighting for climate justice to ensure that not an inch is given to those who would use the fact of environmental degradation as grounds for racist nationalism and, as the El Paso and Christchurch shooters encouraged, genocide. This means maintaining a vigilance against not only the most explicit eco-fascists and their “blood and soil” sentiments, but also against arguments (which have emerged, too, in some parts of the so-called left) around population control and the threat of mass migration to resources both economic and environmental.

“The American lifestyle affords our citizens an incredible quality of life. However, our lifestyle is destroying the environment of our country,” the El Paso manifesto notes, adding, “Everything I have seen and heard in my short life has led me to believe that the average American isn’t willing to change their lifestyle, even if the changes only cause a slight inconvenience. … So the next logical step is to decrease the number of people in America using resources.” For the attacker, nonwhite immigrants are not the cause of resource depletion, but their demise en masse is the solution.

Eco-fascism is not new and finds its origins in Progressive-era linking of environmental preservation and eugenics. Eco-fascism’s founding father, Madison Grant, was a renowned preservationist, bestselling author, hideous racist, friend of Theodore Roosevelt, and an inspiration to Hitler. He was director of the American Eugenics Society and vice president of the Immigration Restriction League, while also credited as the creator of modern wildlife management. Claims of a people’s mythic connection to their land combined with bunk race science form the basis of eco-fascism, which can today call upon the very real threat of climate change to double down on its racist, nationalist agenda.

The so-called deep ecology movement, claiming to argue for the intrinsic value of all living things, insists that the flourishing of nonhuman life is impossible without decreasing the human population. Deep ecologists like David Foreman in the 1980s welcomed famine as a means of depopulation; his fellow eco-fascist contemporaries saw a similar boon in the AIDS crisis. Finnish deep ecologist writer Pentti Linkola deploys perverse “lifeboat ethics” to argue for eco-fascist measures, including an end to all immigration. “What to do when a ship carrying a hundred passengers suddenly capsizes and there is only one lifeboat?” Linkola wrote. “When the lifeboat is full, those who hate life will try to load it with more people and sink the lot. Those who love and respect life will take the ship’s axe and sever the extra hands that cling to the sides.” Yet such cheap metaphors for preservation through decreased population leave unsaid the profound white supremacist undergirding of all such eco-fascist positions. Marginalized, colonized, impoverished, and displaced populations are always the last on the lifeboat.

As I noted last month, according to new statistics from the Office of the U.N. High Commissioner for Refugees, the population of people on Earth displaced by conflict or persecution reached 70.8 million in 2018 — more than double the number recorded in 2012. Disasters fueled by climate change were responsible for at least 18.8 million internal displacements in 2017, as well as bolstering cross-border migration, according to the Internal Displacement Monitoring Centre. In another recent report on climate change and poverty, the U.N. special rapporteur on extreme poverty and human rights, Philip Alston, warned of a “climate apartheid” in which “even if current targets are met, tens of millions will be impoverished, leading to widespread displacement and hunger.”

Bold climate policies like the Green New Deal, and even bolder challenges to capitalist production in the name of climate justice, must include a commitment to the free movement of people, especially on the part of countries, like the U.S., that bear vast responsibility for global climate degradation. As I have argued, wealthy countries have both the space and the resources to take in many millions of immigrants, if wealth, resources, and land were justly distributed.

The generic environmentalist discourse — “save the planet” and so on — all too easily ignores that climate decimation will not happen to everyone at once. The eco-fascist openly supports the genocide of environmental degradation’s front-line victims. The politicians in the “global north” who refuse to open borders to refugees might decry the massacre in El Paso, but in the face of mass, climate-fueled migration, the consequences of closed-border policies will be more murderous than any number of eco-fascists with assault rifles.