Impeaching Trump only for Ukraine would give him a clean bill of health on everything else, like his obstruction of the Mueller investigation. 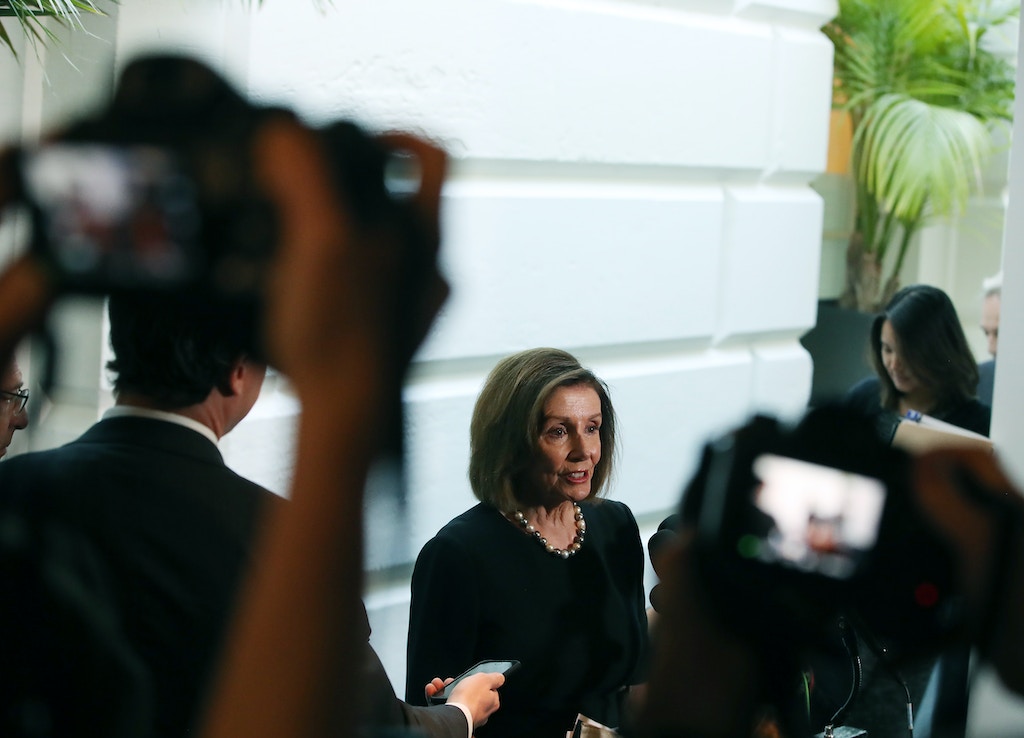 Speaker of the House Nancy Pelosi speaks to the media on Sept. 25, 2019, after meeting with the House Democratic caucus one day after announcing that the House will start a formal impeachment inquiry against President Donald Trump.

Are Democrats preparing to snatch defeat from the jaws of victory? Speaker Nancy Pelosi’s announcement on Tuesday that the House of Representatives would hold an “official impeachment inquiry” over Trump’s phone call with the president of Ukraine, and his request for dirt on Joe Biden and his son Hunter, was a welcome one. But on Wednesday, according to several reports, “Pelosi and senior House Democrats agreed in a private meeting … that they should narrow their impeachment investigation of President Trump to his dealings with the president of Ukraine.”

To be clear: There is now a majority in the House for impeachment, especially with the publication of the whistleblower complaint on Thursday, which reveals how “the President of the United States is using the power of his office to solicit interference from a foreign country in the 2020 U.S. election.” House Democrats — even in swing seats — have united on this issue and see Trump as a clear threat to national security. It looks like a slam dunk.

So how then might this end up as a defeat, and not a victory? Think about it. For House Democrats to wait this long and then impeach a reckless, lawless, racist, tax-dodging president only over his interactions with the president of Ukraine would be to effectively give Trump a clean bill of health on everything else. Going into an election year, Democrats would be unilaterally disarming — unable to offer further substantive criticisms of Trump’s crimes and abuses of power across the board. “Why didn’t you impeach him for it?” Republicans will ask.

Forgive me if I have no faith in the House Democratic leadership, which has never missed an opportunity to miss an opportunity. The same political geniuses who dragged their feet on impeachment until 48 hours ago, after ridiculously having suggested the president was “goading” his opponents into impeaching him, are now telling us to trust them, that they know best, that Ukraine is the be-all and end-all of this impeachment inquiry.

Thankfully, not all Democrats agree. On Deconstructed this week, Julián Castro — who in April became the first Democratic presidential candidate to call for Trump’s impeachment — told me he wants to see congressional Democrats go for a broad impeachment inquiry because of “clear evidence that there may be other violations of the law.” As Castro explains, the ultimate goal of impeachment is not to score a political or partisan point but to “show the American people that nobody is above the law.”

“We are going to focus on this particular matter,” announced House Majority Leader Steny Hoyer, adding that it’s “not hard to understand.”

Read a poll. A majority of Americans happen to agree with (literally) 1,000 former federal prosecutors that the president obstructed justice and don’t believe the Mueller report exonerated Trump. A majority also agree that Trump is a racist and a liar, and that corruption has increased on his watch. Trump is a historically unpopular and disliked president — and for a variety of reasons.

Read a history book. In 1868, Andrew Johnson became the first president to be impeached and, in his case, the House of Representatives adopted 11 articles of impeachment, ranging from his violation of the Tenure of Office Act to his attempt to “disgrace” Congress. A little over a century later, in 1974, the House Judiciary Committee passed three lengthy and detailed articles of impeachment against Richard Nixon, covering obstruction of justice, abuse of power, and contempt of Congress. The first of those articles even cited Nixon’s “false or misleading public statements for the purpose of deceiving the people of the United States” and his efforts “to cause prospective defendants, and individuals duly tried and convicted, to expect favored treatment and consideration in return for their silence or false testimony, or rewarding individuals for their silence or false testimony.” (Sound familiar?)

Read Trump’s tweets. Since Tuesday afternoon, the president who was supposedly going to “self-impeach” has been ranting and raving online, calling Pelosi’s announcement a “total witch hunt,” “scam,” “garbage,” and “presidential harassment.” Trump, who was 17 when John F. Kennedy was assassinated, even claimed, “There has been no President in the history of our Country who has been treated so badly as I have.”

Does this sound like a president who wants to be impeached? Or, rather, a president who is (rightly) concerned that a wide-ranging impeachment inquiry could uncover a wide range of new scandals and crimes?

“He looks hunted,” wrote MSNBC’s Chris Hayes. So why hold back now? Why put all the impeachment eggs in the Ukraine basket? Why not make the strongest case possible and dig deep into Trump’s record over the past 2 1/2 years as a whole? Did Democrats learn no lessons from the Russia investigation? “We’re here in the first place because the exclusive approach failed with Mueller,” tweeted the New Republic’s Osita Nwanevu.

And what’s with the rush to get this done “by the end of the year or even sooner,” as Politico reports? Is there somewhere else that House Democrats need to be? Are they in a hurry to get back to passing bills that then get blocked by the same Republican-controlled Senate that will be voting down their articles of impeachment? Why not take a lesson from the GOP playbook? During the Obama presidency, the Republican-led Benghazi Select Committee held “33 hearings over more than two years into a topic that had already been investigated by seven other Congressional committees.”

The point of impeachment, remember, is for the House of Representatives to loudly and publicly indict Trump for his agglomeration of high crimes and misdemeanors. Whether or not he is removed from office is beside the point; the point is for Congress to hold the president to account by demanding documents and scheduling televised hearings on a range of potentially impeachable offenses — and winning over public opinion in the process.

For House Democrats to try and hive off Trump’s corrupt, lawless, and authoritarian behavior over Ukraine and Biden from his corrupt, lawless, and authoritarian behavior over his taxes, or Mueller, or Stormy Daniels, or Puerto Rico, or the Squad, or Amazon — I could go on and on — is madness. To quote Crooked Media’s Brian Beutler: “IT’S ALL ONE FUCKING STORY!”

The Democrats only get one chance at impeachment. One chance to remind the public there is a criminal sitting in the Oval Office. They can’t afford to rush it — or blow it.