As Longest-Serving Senate President in U.S. History Steps Aside, Maryland Set for a Political Shakeup

Mike Miller has been a formidable barrier to progress for decades. He’s being replaced as state Senate president by Baltimore progressive Bill Ferguson. 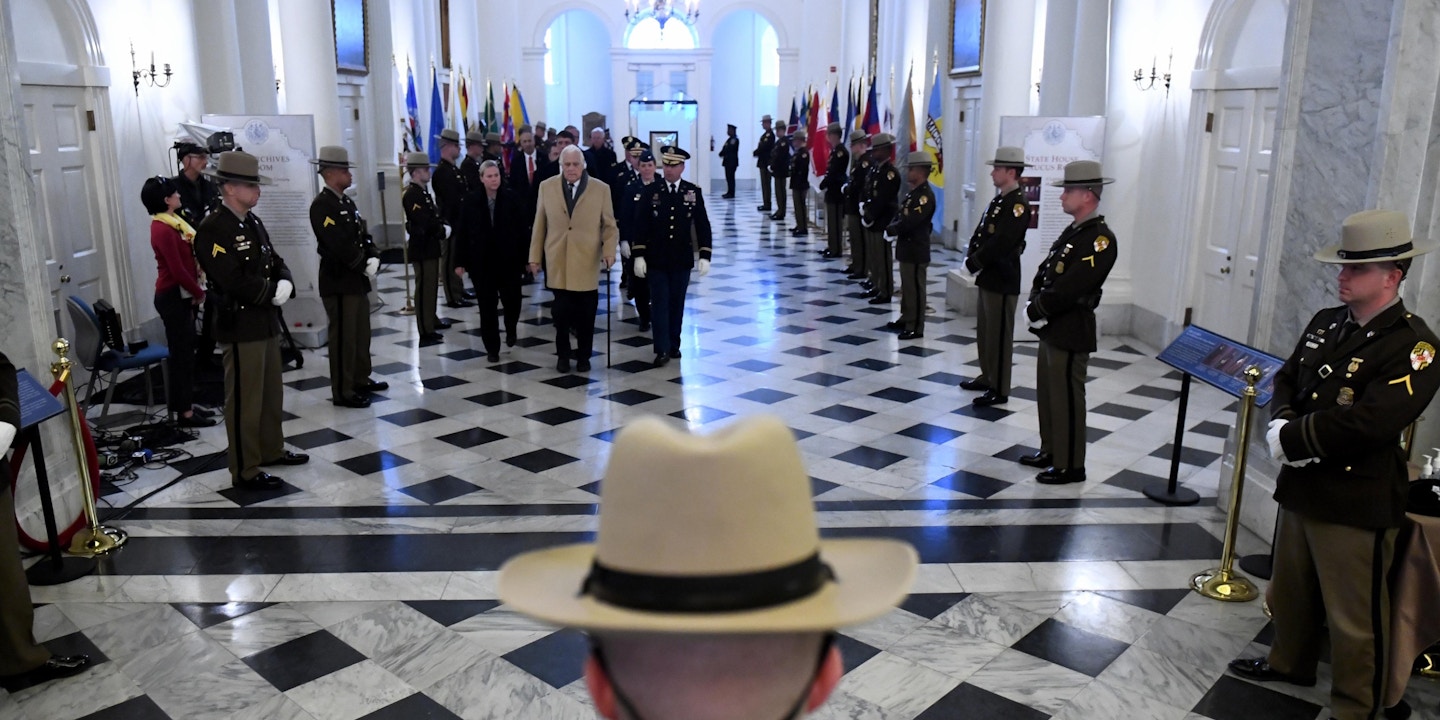 For as long as anybody in Maryland can remember, any effort to pass progressive legislation in this deeply blue state began with one vexing question: What do we do about Mike?

Thomas “Mike” Miller, the longest serving state Senate president in U.S. history, has been a formidable barrier to progressive action for decades. A member of the Maryland Senate since 1975, the conservative Democrat has been the chamber’s top leader for the last 32 years, wielding unparalleled and deft power over politics, careers, and how or whether bills move forward in Annapolis. Allied with the state’s top lobbyists, he is who progressives have blamed over the years for stalling, thwarting, and watering down top legislative priorities like raising the minimum wage, guaranteeing paid sick leave, and reforming marijuana laws. “Why does Maryland punch below its weight class in terms of progressive legislation? It’s because of leadership,” said Kim Propeack, the political and communications director for CASA de Maryland, an immigrant rights group. “People want to honor Mike Miller’s legacy, and I think that’s appropriate, but there’s a whole lot of stuff that we have the most conservative versions of, and that’s in large part because of him.”

In theory, Maryland could be passing model legislation in the same way New York, Massachusetts, California, and Washington state have been doing. Registered Democrats outnumber Republicans 2 to 1, the state has not cast its votes for a Republican president since 1988, and even with Republican governors sometimes at the helm, Democrats have retained a decadeslong veto-proof majority in the state Senate.

Progressives tried to take down Miller in 2018, mounting a primary challenge under the banner of “Take a hike, Mike.” While Miller ultimately won his reelection, unions, the Maryland Working Families Party, and other statewide left-wing organizations did manage to unseat a handful of other powerful incumbents tied to Miller. Among those ousted included the Senate Finance Committee chair, who many thought would eventually succeed Miller as president; the Senate Health and Environmental Affairs Committee chair; and the president pro tempore, the Senate’s second most powerful Democrat. Despite those wins, progressives’ ability to influence change in Annapolis remained limited, as Miller still controlled committee assignments and how legislation moves forward.

Maryland’s political landscape, however, drastically changed late last month, when Miller announced his resignation as Senate president due to complications from his cancer treatment. Come next year, he will continue to be a rank-and-file senator, but the state Senate will instead be led by Bill Ferguson, a 36-year-old progressive lawmaker from Baltimore, and one of the most vocal advocates for public education funding in Annapolis.

Larry Stafford, the executive director of Progressive Maryland, celebrated.“Now there’s more hope for finally having a more just and fair system of taxation in Maryland,” he said, “something that Mike Miller has not been supportive of in terms of the wealthy paying their fair share.”

Ferguson’s ascension to the Senate presidency was something of a coup for progressives in Annapolis. Even with several of Miller’s closest allies having lost their seats in 2018, the expectation was that a more senior-level, establishment-friendly Democrat would take the reins.

Four prominent senators had been gunning for the role in a behind-the-scenes battle last month, but none were proving they could win the 17 votes necessary to win the nomination. Then, as the Baltimore Sun reported, the influential Senate Finance Committee chair, 83-year-old Delores Kelley, approached Ferguson and asked him to consider jumping into the fray. She liked his budgetary expertise, said his age shouldn’t deter him, and thought he could help break the succession impasse. Miller was simultaneously applying pressure on the candidates to come to a nominating consensus, to avoid an acrimonious succession squabble. Some of the chamber’s more progressive senators began feeling nervous that the leading contender for the Senate presidency appeared to be Sen. Douglas J. J. Peters of Prince George’s County, an anti-abortion Democrat who also voted against same-sex marriage. “We played a role in backing up the message that someone who is anti-choice shouldn’t be the next senate president in Maryland in the year 2020,” said Stafford. After several weeks of campaigning around the state, Ferguson won out as the unanimous choice. Kelley played a key role shoring up votes for him too.

As Maryland Matters politics reporter Josh Kurtz noted, “While it’s not going to happen overnight, the culture in the Senate is going to change dramatically — more so, most likely, than if any of the other contenders to succeed Miller had prevailed.” Miller leaving his post is also expected to be a blow to the top lobbyists in Maryland, many of whom either served as Miller’s own political aides at one point or worked previously in the state Senate alongside him. Ferguson also accepts lobbyist and corporate donations, but Gerard Evans, a lobbyist who served as Miller’s top legislative assistant in the early 1980s, told the Washington Post he expects Ferguson to be more “participatory” in his legislative style and less reliant on a “key core” of people.

Ferguson’s new role will also help shift the balance of power in Annapolis from the D.C. suburbs — where Miller lived — to Ferguson’s home in Baltimore, which is much more heavily dependent on state assistance for basic municipal needs. Since May, the Maryland House of Delegates has also been led by someone from the Baltimore area: Adrienne Jones, a Democrat from Baltimore County, was elected speaker of the House in May to replace the previous speaker, who was from Anne Arundel County and had led the chamber for 17 years until his death in April.

Ferguson did not return requests for comment, and he’s been careful in recent weeks to give thanks and credit to Miller for his years of public service. “I have been humbled to learn such a great deal about leadership from Mike Miller in the last 9 years,” he wrote in an October 26 email to supporters. “As I transition into this new role, we will continue to work side by side as the Senate reaches new progress for all Marylanders.”

“I’m most excited about the prospect for a small-dollar fund matching program and getting the influence of money out of politics in state-level elections,” he told The Intercept. “We’ve been able to win campaigns to pass public financing in Howard County, Prince George’s County, Montgomery County, and Baltimore City, and we believe this shift with Miller will enable us to have more success in pushing that type of policy forward, which could further change the makeup of the state’s political landscape.” A study released this past September by the Maryland Public Interest Research Group found that candidates who participated in Montgomery County’s new public financing program attracted far more donors in the 2018 election than those who didn’t.

Maryland activists are also hoping to advance paid family leave and to remove the exemptions from their watered-down minimum wage law. They are also bracing for intense fights next session over public education. Lawmakers plan to convene next year over new school funding recommendations issued this past September by a 26-member state commission.

The Kirwan Commission, as it’s known, was established in 2016 by the state legislature (and named after William Kirwan, the former chancellor of the University of Maryland) to rewrite the state’s long-standing school funding formula. After several years of deliberations, the Kirwan Commission recommended a $3.8 billion increase in school spending over a decade, with about half of that money coming from county and city governments, and the other half from the state. The commission also included recommendations for how the new money should be spent, like raising teacher salaries, expanding pre-K, and investing more in schools with high concentrations of poverty. Activists are calling next year a “once-in-a-generation” opportunity to fix the state’s inequitable education system.

According to a recent poll by Goucher College, about 70 percent of Maryland adults think the state spends too little on public schools, and nearly three-fourths said they would be willing to spend more on improving education. But Republican Gov. Larry Hogan has already made clear he plans to fight hard against the Kirwan Commission’s recommendations, vowing to oppose any major tax increases that would be necessary to implement the plan.

While Miller has said he would fight to move public education forward, his friendly relationship with the governor, and his own centrist track record, had progressives feeling wary about getting a strong school funding formula through the grinder next year. Ferguson, by contrast, was actually on the Kirwan Commission himself, previously taught in Baltimore with Teach for America, and now works a day job at the Johns Hopkins School of Education.

“He has a history in education, is very knowledgeable on the state budget, and we believe he will be more willing to go toe-to-toe with the governor over this,” said Stafford. “We’re ready to go.”