They were hardly kindred spirits. In fact, they stood on opposite sides of one of the world’s fiercest geopolitical divides. Yet in a secret effort at detente, two of the most formidable organizations in the Middle East held a previously undisclosed summit at a Turkish hotel to seek common ground at a time of sectarian war.

The 2014 summit brought together the foreign military arm of Iran’s Islamic Revolutionary Guard Corps, known as the Quds Force, and the Muslim Brotherhood, a sprawling Islamist political movement with significant influence throughout the region.

The Quds Force represents the world’s most powerful Shia-dominated nation, while the Muslim Brotherhood is a stateless but influential political and religious force in the Sunni Muslim world. The Trump administration designated the Revolutionary Guards a foreign terrorist organization in April, and the White House has reportedly been lobbying to add the Muslim Brotherhood to the list as well.

The disclosure that two such polarizing organizations on either side of the Sunni-Shia divide held a summit is included in a leaked archive of secret Iranian intelligence reports obtained by The Intercept.

There were public meetings and contacts between Iranian and Egyptian officials while Muslim Brotherhood-backed Mohamed Morsi was president of Egypt from 2012 to 2013. But Morsi was forced from power in a coup supported by the Egyptian Army in July 2013 and later arrested. The regime of Abdel Fattah el-Sisi launched a crackdown on the Muslim Brotherhood, and many of its leaders have since been imprisoned in Egypt or are living in exile.

An Iranian intelligence cable about the 2014 meeting provides an intriguing glimpse at a secret effort by the Muslim Brotherhood and Iranian officials to maintain contact — and determine whether they could still work together — after Morsi was removed from power. A supporter of Egypt’s ousted President Mohamed Morsi reads the Quran next to a tent outside the Rabaa al-Adawiya mosque, where protesters established a camp, in August 2013 in Cairo.

The cable about the summit, from the Iranian Ministry of Intelligence and Security, or MOIS, reveals the fraught political dynamics that separate powerful Sunni and Shia organizations like the Muslim Brotherhood and the Quds Force. Above all, the cable and the story of the summit expose the maddening complexities of the political landscape in the Middle East and show how difficult it is for outsiders, including U.S. officials, to understand what’s really going on in the region.

On the surface, the Quds Force and the Muslim Brotherhood would appear to be archenemies. The Quds Force has used its covert power to help Iran expand its influence throughout the Middle East, backing Shia militias that have committed atrocities against Sunnis in Iraq, while siding with the brutal regime of Bashar al-Assad in the Syrian civil war. The Muslim Brotherhood, by contrast, has been a key player in Sunni Arab politics for decades, bringing a fundamentalist Islamist approach to a long battle against autocratic governments in Egypt and elsewhere. Along the way, extremists have left the Muslim Brotherhood to form splinter groups, like Hamas, that have sometimes veered into terrorism.

The summit came at a critical moment for the Quds Force and the Muslim Brotherhood, which may explain why the two sides agreed to talk.

But the summit came at a critical moment for both the Quds Force and the Muslim Brotherhood, which may explain why the two sides agreed to talk. When the meeting was held in April 2014, the Islamic State was tearing across the Sunni-dominated regions of northern Iraq. The Iraqi Army was melting away in the face of the terrorist group’s brutal tactics, and ISIS was threatening the stability of the Iraqi government in Baghdad.

The threat of ISIS prompted the Quds Force to intervene on behalf of the Shia-dominated government of Prime Minister Nouri al-Maliki in Iraq. The Quds Force began leading Shia militias into battle against ISIS, but Maliki was widely seen as an Iranian puppet and had stoked deep anger and resentment among Iraqi Sunnis. He would soon be pushed aside.

At the same time, the dream of the Arab Spring had turned into a nightmare. War was raging in Syria while in Egypt, the ouster of Morsi’s Muslim Brotherhood-dominated government had led to a new dictatorship under Sisi. Morsi died in an Egyptian courtroom in June after nearly six years in solitary confinement.

Weakened by its losses in Egypt, the Muslim Brotherhood probably viewed an alliance with the Iranians as an opportunity to regain some of its regional prominence. 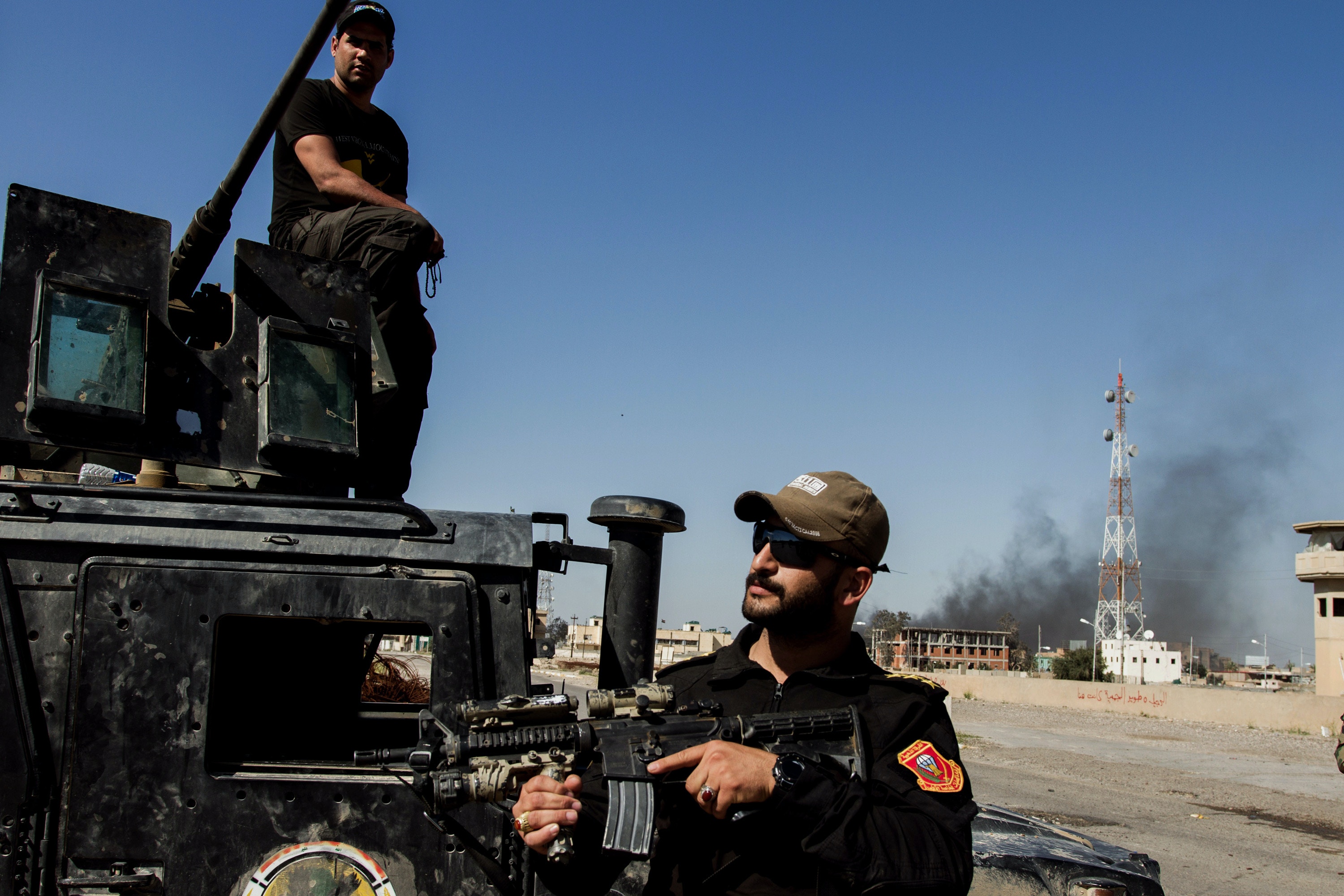 The Muslim Brotherhood-Quds Force summit unfolded against the backdrop of deepening sectarian divisions in Iraq as ISIS gained strength. The Shia Popular Mobilization Forces, or Hashd al-Shaabi, took most of Tikrit, Iraq, from ISIS control in April 2015.

What neither side knew was that there was a spy in the summit. Iran’s MOIS, a rival of the Revolutionary Guards within the Iranian national security apparatus, secretly had an agent in the meeting who reported everything that was discussed. The MOIS agent not only attended but “acted as coordinator of this meeting,” according to the MOIS cable. The MOIS envied the Revolutionary Guards’ power and influence and secretly tried to keep track of the Guards’ activities around the world, the leaked archive shows.

Turkey was considered a safe location for the summit, since it was one of the few countries on good terms with both Iran and the Muslim Brotherhood. Yet the Turkish government still had to worry about appearances, so it refused to grant a visa to the highly visible chief of the Quds Force, Maj. Gen. Qassim Suleimani, according to the MOIS cable. With Suleimani unable to enter Turkey, a delegation of other senior Quds Force officials — led by one of Suleimani’s deputies, a man identified in the cable as Abu Hussain — attended the meeting in his place.

The Muslim Brotherhood was represented by three of its most prominent Egyptian leaders in exile: Ibrahim Munir Mustafa, Mahmoud El-Abiary, and Youssef Moustafa Nada, according to the document. (After 9/11, the George W. Bush administration and the United Nations suspected that Nada had helped finance Al Qaeda; his bank accounts were frozen and his movement restricted. In 2009, the U.N. sanctions against him were lifted because no proof of his alleged ties to terrorism could be found.) Supporters of the Muslim Brotherhood await the arrival of Brotherhood parliament members during the first session of the Egyptian Parliament on Jan. 23, 2012, in Cairo.

The Muslim Brotherhood delegation opened the meeting with a boast, pointing out that the outfit “has organizations in 85 countries in the world.” Perhaps that was an effort to counter the Iranian government’s support for the Quds Force, since the Muslim Brotherhood had no similar national power backing it up.

Perhaps, the Brotherhood delegation said, the two sides could join forces against the Saudis. The best place to do that was in Yemen, where an insurgency by the Iranian-backed Houthis against the Saudi-backed Yemeni government was about to escalate into full-scale war.

One of the most important things the groups shared, the Muslim Brotherhood representatives said, was a hatred for Saudi Arabia.

Meanwhile, the Brotherhood wanted peace in Iraq, the delegation said. If there was one place in the region where help bridging the Sunni-Shia divide was needed, it was there, and maybe the Brotherhood and the Quds Force could cooperate to stop the war.

“On Iraq, it is good to lessen the tension between Shia and Sunni and give Sunnis a chance to participate in the Iraqi government as well,” the delegation said, according to the MOIS cable.

But the Brotherhood also recognized that there were limits to regional cooperation with the Quds Force. Syria, for example, was such a complicated mess that the Brotherhood simply threw up its hands. “Of course, the issue of Syria currently is out of the hands of Iran and the Brotherhood, and there is nothing particular to be done about it,” the cable noted.

And while the Muslim Brotherhood had been pushed out of power the year before the summit by the Egyptian Army, the group didn’t want Iranian support in Egypt. “On the issue of Egypt, we as Brotherhood are not prepared to accept any help from Iran to act against the government of Egypt,” the delegation said. The Brotherhood leaders probably recognized that they would be discredited in Egypt if they sought Iranian aid to regain power in Cairo. Members of Iran’s Islamic Revolutionary Guard Corps march in front of Ayatollah Ruhollah Khomeini’s mausoleum outside Tehran on Sept. 22, 2011, during an armed forces parade marking the 31st anniversary of the start of the Iraq-Iran War.

Ships in the Night

The Brotherhood has indeed historically been averse to violence, in contrast to the Quds Force, which is part of a military organization. Some experts have objected to the Trump administration’s desire to designate the Brotherhood a terrorist organization, arguing that it does not engage in terrorist activities.

In one of his last columns in the Washington Post before he was murdered, Saudi journalist and dissident Jamal Khashoggi criticized the Trump administration for targeting the Muslim Brotherhood and for failing to understand that it played an essential democratic role in the Middle East. “The United States’ aversion to the Muslim Brotherhood, which is more apparent in the current Trump administration, is the root of a predicament across the entire Arab world,” Khashoggi wrote in August 2018, just two months before his death at the hands of a hit team in the Saudi consulate in Istanbul. “The eradication of the Muslim Brotherhood is nothing less than an abolition of democracy and a guarantee that Arabs will continue living under authoritarian and corrupt regimes.”

Maybe the Muslim Brotherhood leaders decided to be candid with their Iranian counterparts during the summit because they could already sense that the Quds Force representatives were not really interested in forming an alliance. That is certainly how the meeting played out. In fact, it soon became clear that the two sides were talking past each other.

“Friends of the Quds Force who were present in this meeting disagreed that there should be an alliance of Shia and Sunni,” according to the MOIS report on the meeting. At the same time, somewhat mysteriously, the Quds Force representatives insisted that they “never had any differences with the Brotherhood.”

The Brotherhood representatives were clearly irked by that unrealistic statement. “This view was not accepted by the Brotherhood delegation,” the cable noted.

Despite the apparent failure of the talks, the MOIS agent spying on the summit noted that he was willing to “travel again to Turkey or Beirut to be present” in any follow-up meetings. It is not clear from the leaked archive whether further meetings of this kind occurred.

Join the conversation
The Iran Cables