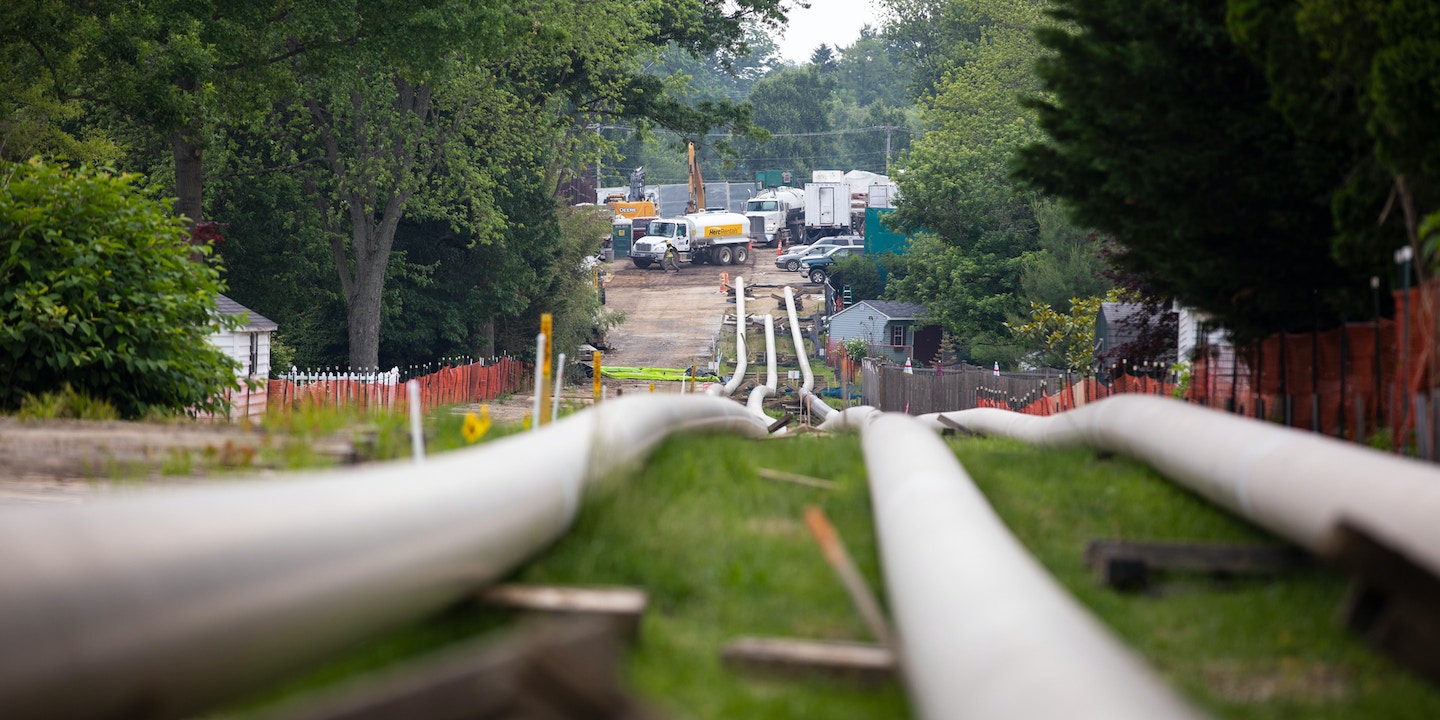 Security personnel working for Energy Transfer, one of the largest and most controversial oil and gas pipeline companies in the U.S., have been charged with bribery and criminal conspiracy for allegedly recruiting, hiring, and hiding payments to Pennsylvania state constables.

According to a complaint filed December 3 by Chester County District Attorney Tom Hogan, Energy Transfer illegally hired 19 constables to guard the Mariner East 2 natural gas pipeline, which has faced opposition from residents over the project’s ecological impact, explosion risks, and violations of their property rights. The constables were encouraged to wear their uniforms and badges and carry their guns, in what Hogan described as an intimidation tactic.

While it is not uncommon for companies to hire uniformed off-duty police officers to provide security services, in Pennsylvania, constables are elected officials barred from private security work. Furthermore, they are required to report outside income of more than $1,300. None of the seven who met that threshold did, according to the complaint. And in what appeared to be an attempt to hide the illegal activity, Energy Transfer paid the constables via a series of subcontractors, in many instances using handwritten checks that were not claimed for tax purposes.

Hogan charged an Energy Transfer security manager, two contractors for the security firm TigerSwan, and two former state troopers for involvement in what his office called a “buy-a-badge scheme.”

“We do not believe these charges have any merit,” Energy Transfer spokesperson Amanda Gorgueiro told The Intercept in an emailed statement. “The Pennsylvania constables in question were hired by an independent, Pennsylvania-based security firm to help maintain the safety of our worksites. Local law enforcement never expressed any objection to this security plan when it was discussed and implemented.”

The case is an example of the myriad ways that corporations behind some of the country’s most controversial fossil fuel projects are using local law enforcement to overcome opposition. And it’s only the latest scandal involving Energy Transfer’s security personnel. The state security boards of Louisiana and North Dakota have each confronted TigerSwan for attempting to circumvent local licensing laws.

In North Dakota, where Energy Transfer hired TigerSwan to guard the Dakota Access pipeline, the security firm faced scrutiny after The Intercept published leaked documents detailing its invasive surveillance practices, which involved infiltrators, aerial monitoring, and a close collaboration with local law enforcement to thwart massive protests near the Standing Rock reservation. The documents reveal that both of the TigerSwan contractors charged in Pennsylvania previously worked on the Dakota Access pipeline.

Until now, Energy Transfer has successfully distanced itself from the deeds of its contractors. Hogan’s case offers a rare glimpse of the pipeline company’s hand in questionable security activities.

The Mariner East 2 pipeline carries volatile propane, butane, and ethane from western Pennsylvania and Ohio’s shale fields to a terminal near Philadelphia. The natural gas liquids are mostly destined to become ingredients for plastics manufacturing in Europe. Sunoco, the Energy Transfer subsidiary in charge of Mariner East 2, repeatedly spilled drilling mud during construction, contaminating drinking water wells, and the construction has opened sinkholes on properties along the pipeline’s route.

Hogan, a Republican, announced a wide-ranging criminal investigation into the construction of Mariner East 2 around the time the pipeline began operating last December. Meanwhile, Pennsylvania Attorney General Josh Shapiro launched his own joint investigation into the pipeline project with Delaware County’s district attorney in March. And in November, the Associated Press reported that the FBI had launched an investigation into Pennsylvania Gov. Tom Wolf’s permitting of Mariner East 2’s construction. Texts and emails obtained by The Guardian and the nonprofit Clean Air Council indicate Wolf’s office was involved in fast-tracking the project’s permit approval, bypassing planned environmental reviews.

“This is a pretty simple case,” Hogan stated in a press release. “State constables sold their badges and official authority. Energy Transfer bought those badges and authority, then used them as a weapon to intimidate citizens. And the defendants attempted to conceal their activity through a maze of companies and payments. Meanwhile, new sinkholes are popping up along the Mariner East pipeline. And still, the governor remains asleep at the wheel.”

Lisa Drive used to be a quiet street, part of a tight-knit, middle-class neighborhood in Pennsylvania’s West Whiteland Township. In 2014, when a land agent for Energy Transfer went door to door seeking access to residents’ backyards in order to build the pipeline, many were unconcerned, believing the company’s assurances that the workers would be in and out.

Instead, the neighborhood was transformed. It wasn’t just the midnight construction or backyard sinkholes that disturbed residents — the area was also swarmed with security personnel.

Chris “PK” Digiulio, a resident of Chester County, had closely followed the Dakota Access pipeline protests at Standing Rock and was disturbed to learn of the Energy Transfer pipeline coming to her community. After construction began on Lisa Drive, one of the neighborhood’s residents, Thomas Allen, invited her to monitor and film the company’s activities in his backyard.

Allen had recently purchased his childhood home after the death of his father. The backyard, which Allen’s father had taken pride in maintaining, was destroyed by the construction. Two sinkholes appeared overnight, and a guard was posted 24/7. Allen and his mother began to live with their shades drawn.

Men in cars with tinted windows parked along the street, with state constables among those patrolling the neighborhood. Pipeline security told Digiulio that she could not sit on Allen’s front lawn, despite the fact that it was not on the easement. Security personnel photographed visitors and their license plate numbers, and some visitors began to suspect they were being followed as they left the area, Diguilio said.

In January, Detective Ben Martin, the lead investigator in Hogan’s inquiry, was parked on Lisa Drive in the wake of yet another sinkhole. A man with a badge and a gun who identified himself as Constable Mike Robel approached Martin’s vehicle and asked him to park elsewhere, according to the complaint. The investigator declined and informed Robel that he was a detective. The constable told him that he worked for Sunoco, which Martin knew was illegal.

In August, Robel and another state constable were arrested for improperly using their positions and badges for personal profit. In response, Energy Transfer attempted to shift blame to a local security firm. Lisa Coleman, an Energy Transfer spokesperson, told press at the time that the two officers were not employees of Sunoco or Energy Transfer. “They were employed by Raven Knights, who provided security services and personnel,” she said. “We have a code of conduct for all of contractors and third-party vendors that clearly states what are acceptable behaviors and business practices, and we expect our contractors and their employees to adhere to that.”

The constables were paid via Raven Knights “in a fashion calculated to avoid legally mandated reporting requirements,” the complaint alleges. The structure of the payments also served to obscure Energy Transfer’s supervision of the constables, according the complaint. Raven was officially owned and operated by two former state troopers, one of whom lacked a private security license. The Raven bank account used to pay the constables was fed by deposits from TigerSwan and two Energy Transfer construction subcontractors. The former state troopers were among those charged for involvement in the plot.

Energy Transfer allegedly paid the constables a total of $804,590 between September 2017 and February 2019, according to the complaint, “for the purposes of bribing Pennsylvania State Constables to use the authority of their office.”

The Pennsylvania scheme is reminiscent of Energy Transfer’s troubles in other states. The North Dakota Private Investigation and Security Board sued TigerSwan for operating without a security license while guarding the Dakota Access pipeline. Meanwhile, in Louisiana, the site of Energy Transfer’s Bayou Bridge oil pipeline, the security board accused TigerSwan of registering a new security company in the state in an attempt to circumvent a previous license denial.

“It’s the same people, it’s the same industry,” said a former TigerSwan contractor who declined to be named out of fear of harassment from their former employer. Given TigerSwan and Energy Transfer’s history of intimidating anti-pipeline protesters in other states, he added, “There’s no surprise that they’re doing this.”

Boffo, TigerSwan’s site supervisor in Pennsylvania, managed the company’s security guards along the Iowa section of the Dakota Access pipeline and helped coordinate with local sheriff’s departments, according to a situation report TigerSwan filed to Energy Transfer in March 2017.

McKinnon, a senior security adviser for TigerSwan, worked as an intelligence analyst guarding the Illinois section of the Dakota Access pipeline. He’s listed as the contact person on a PowerPoint presentation titled “The Billionaire’s Club,” leaked to The Intercept by a former TigerSwan contractor, which claims that billionaire foundations are the puppeteers behind the “faux grassroots movement” against oil and gas pipelines — an indication of how Energy Transfer and TigerSwan view opponents like Allen and Digiulio.

According to the former TigerSwan contractor, McKinnon created the presentation, as well as another titled “Rules for Radicals.” That presentation, which proposes countertactics for various stages of social movement development, confirms the company’s interest in taking advantage of public police to break down environmental movements.

One countertactic suggests that personnel “utilize local [law enforcement] and Intel to rapidly oppose any Direct Action/Activist disruption activity.” Another underlines the need to “continue to lead [law enforcement] to quashing any small illegal protests.” Other slides describe tactics that fall outside of traditional security guard activities. “Control the media narrative,” one slide urges. Another goes even further, suggesting that it may be necessary to “create a strong, positive grass roots movement or harness already existing groups in order to oppose the build-up of local adversarial groups.”

According to the former TigerSwan contractor, the PowerPoints had less to do with protecting the people of Pennsylvania — or even the pipeline — and more to do with using the anti-pipeline movement as a source of profit for the private security industry. “The whole point of those PowerPoints was to justify TigerSwan existing,” said the former contractor. They were meant to convey that “this is going to get worse; this is going to grow.”

Digiulio was disturbed to learn of McKinnon’s and Boffo’s previous activities on behalf of Energy Transfer. “I am outraged that Energy Transfer and TigerSwan brought the tactics they developed in North Dakota, Louisiana, and elsewhere around the world to the town where I live,” she said. “It’s not only the company we should focus on, however, it’s also our government. Pennsylvania can revoke their license at any time.”

Ultimately, she wants the energy company and its security personnel out of her community. “This our house. Tiger Swan and Energy Transfer are not welcome here.”