Portrait of a General

In the four decades since the 1979 Iranian Revolution, few Iranian leaders have achieved the global profile attained by Maj. Gen. Qassim Suleimani, the military commander killed in an American airstrike on Thursday. After the 2003 invasion of Iraq, Suleimani emerged as the United States’s most capable adversary in that country. His American counterpart at a key point during the occupation, Gen. David Petraeus, described Suleimani as “a truly evil figure” in a letter to Robert Gates, then the U.S. defense secretary. Over the years, Suleimani gained a reputation as a fearsome military leader who controlled a network of ideologically driven militia proxies across the Middle East.

A more nuanced portrait of Suleimani emerges from a leaked archive of secret Iranian spy cables obtained by The Intercept. The documents were generated by officers from the Iranian Ministry of Intelligence and Security, or MOIS, stationed in Iraq between 2013 and 2015, when the Iranian war against the Islamic State was at its height, and Suleimani was running the show.

The reports reveal how Suleimani was perceived in some corners of the Iranian intelligence establishment, and the picture that emerges does not always align with the carefully crafted public image of the general as an indomitable strategist. While the Iranian-led war against ISIS was raging, Iranian spies privately expressed concern that the brutal tactics favored by Suleimani and his Iraqi proxies were laying the groundwork for major blowback against the Iranian presence in Iraq. Suleimani was also criticized for his own alleged self-promotion amid the fighting. Photos of the Iranian commander on battlefields across Iraq had helped build his image as an iconic military leader. But that outsized image was also turning him into a figure of terror for many ordinary Iraqis.

Some of the cables chronicle Suleimani’s battlefield appearances and meetings with senior Iraqi officials, while others describe the activities of his militia proxies in Iraq. As commander of the elite Quds Force, the external operations arm of the Islamic Revolutionary Guard Corps, Suleimani belonged to a more powerful institutional rival of Iran’s intelligence ministry. In some documents, intelligence officers criticize Suleimani for alienating Sunni Arab communities and helping to create the circumstances that justified a renewed American military presence in Iraq.

A 2014 MOIS document lamented that, partly because Suleimani broadcasted his role as commander of many of the Iraqi Shia militias fighting ISIS, Iraqi Sunnis blamed the Iranian government for the persecution that many were suffering at the hands of these same forces. The document discussed a recent assault by Iran-backed forces against ISIS fighters in the Sunni farming community of Jurf al-Sakhar. The attack had included a number of Shia militia groups, including a notorious outfit known as Asaib ahl al-Haq. The militias succeeded in routing the Islamic State, but their victory soon gave way to a generalized slaughter of locals, transforming the sweetness of Iran’s triumph into “bitterness,” in the words of one case officer. 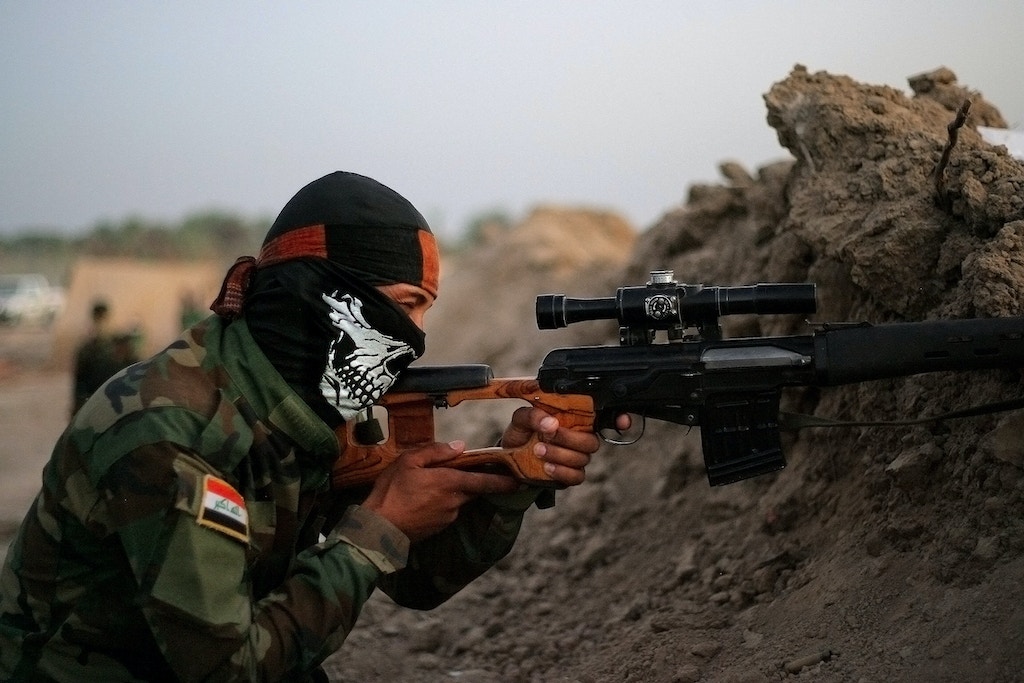 An Iraqi Shia militia member aims his weapon after clashes with militants from ISIS, in Jurf al-Sakhar, 43 miles south of Baghdad on Sept. 28, 2014.

“It is mandatory and necessary to put some limits and borders on the violence being inflicted against innocent Sunni people in Iraq and the things that Mr. Suleimani is doing. Otherwise, the violence between Shia and Sunni will continue,” the MOIS report continued. “At the moment, whatever happens to Sunnis, directly or indirectly, is seen as having been done by Iran even when Iran has nothing to do with it.”

That same document speculated that Suleimani’s public promotion of his role in the war was geared toward building political capital in Iran, possibly for a future presidential bid. But it also contained subtler insights into the Quds Force commander’s character and how he saw himself. The document noted Suleimani’s affection for former Turkish Prime Minister Ahmet Davutoglu, once a close ally of Turkish President Recep Tayyip Erdogan. For a time, Davutoglu was considered the intellectual force behind Turkey’s foreign policy.

“Mr. Suleimani has an old relationship with Ahmet Davutoglu and always compares his role in Iranian foreign policy to that of someone like Davutoglu in Turkish politics,” the secret report said. However, Suleimani’s self-perception had evolved over time, according to the report, and by 2014, with the Iranian proxy war against ISIS in full swing, he had begun to see himself less as a political ideologue and more as a military and intelligence chief comparable to Hakan Fidan, the head of Turkey’s powerful intelligence apparatus.

The intelligence ministry report does not contain further details about Suleimani’s relationships with senior Turkish officials. But the apparent shift in his self-perception ­tracks with developments in the region. Just as Fidan was helping direct a Turkish proxy war in Syria, Iran was ramping up a similar effort in Iraq.

In late 2014, according to the leaked documents, an expansive program was already underway to send Iraqi Shia militia fighters to Iran for training, equipment, and ideological preparation. It was a program in which the Revolutionary Guards played a critical role. These Shia militia fighters went on to fight the Islamic State, but also stood accused at times of waging an indiscriminate sectarian war inside Iraq and undermining the country’s elected government.

Iran’s secret intelligence documents contain insights into how this training campaign was organized, while also shedding light on the idiosyncratic reasons that some Iraqis sought the support of Suleimani and the Revolutionary Guards.

In a September 2014 meeting at the Iranian consulate in Basra, an Iraqi militia commander told an Iranian spy that he wanted his fighters to operate under Iranian control, rather than being directed by the Iraqi army or the Popular Mobilization Units, or PMUs, formed to fight ISIS. His concerns seemed primarily ideological. The commander told his Iranian interlocutor that he already had 600 well-trained fighters and planned to grow his militia in the near future. He was anxious, however, that his troops might lose their ideological discipline without Iranian guidance.

Many volunteers in the PMUs “might not even pray,” he said, and “some commanders and even soldiers” in the Iraqi security forces were said to drink alcohol. The commander asked the Iranian spy to “coordinate for these soldiers to come under the command of Iran,” worrying that his fighters’ morale and discipline would be harmed otherwise. According to the report, the request was enthusiastically granted.

But some Iraqis appear to have romanticized the Revolutionary Guards, and some militia fighters sent to Iran for training found the experience did not meet their lofty expectations. “Unfortunately, those who we send to Iran to receive training are not happy with the cultural situation in Iran,” another commander whose troops had already undergone training in Iran told an intelligence ministry spy, according to a different report from the same month. This commander complained that “brothers in [the Revolutionary Guards] only pray the usual five times a day,” and that the Iranian fighters were not as zealous in their religious practices as the Iraqi trainees had expected.

These Iraqi militias wound up playing a significant, if controversial, role in the war against ISIS. Following Suleimani’s death, some of them are now finding themselves in the U.S. military’s crosshairs. Within 24 hours of the strike that killed the Quds Force leader, another strike took place north of Baghdad, reportedly killing and wounding several members of an Iran-backed militia. There are strong signs that this campaign is just beginning. Late Friday, the State Department announced that it was designating Asaib ahl al-Haq, which had taken part in the 2014 massacre in Jurf al-Sakhar, as a foreign terrorist organization and sanctioning several of its leaders.

In the short term, it is almost certain that violence will escalate in the Middle East. Late Saturday, U.S. President Donald Trump made a provocative threat to bomb 52 selected targets inside Iran if it retaliates for the killing of Suleimani, including Iranian cultural sites. But Iran may not even need to respond with violence to impose a price for the death of the Quds Force commander. In response to widespread outrage over the strike that killed Suleimani, Iraqi Prime Minister Adil Abdul-Mahdi, who is described in the MOIS documents as having a “special relationship” with Iran — and who enjoyed Suleimani’s personal backing when protests demanded his ouster this past fall — pledged on Friday to convene parliament to review the status of American troops in Iraq. By Sunday, the parliament had voted to expel the U.S. military from the country.

If the Iraqi government does make U.S. troops leave in response to Suleimani’s killing, it will be another chapter in what is by now a familiar story: Like the 2003 U.S. invasion of Iraq, this latest act of aggression may be a tactical success for the United States that winds up delivering a strategic victory to Iran.