Joe Biden, Five Years Before Invasion, Said the Only Way of Disarming Iraq Is “Taking Saddam Down”

At a 1998 Senate hearing, Biden argued that “taking this son of a — taking Saddam down” was the only way to guarantee Iraq’s disarmament. 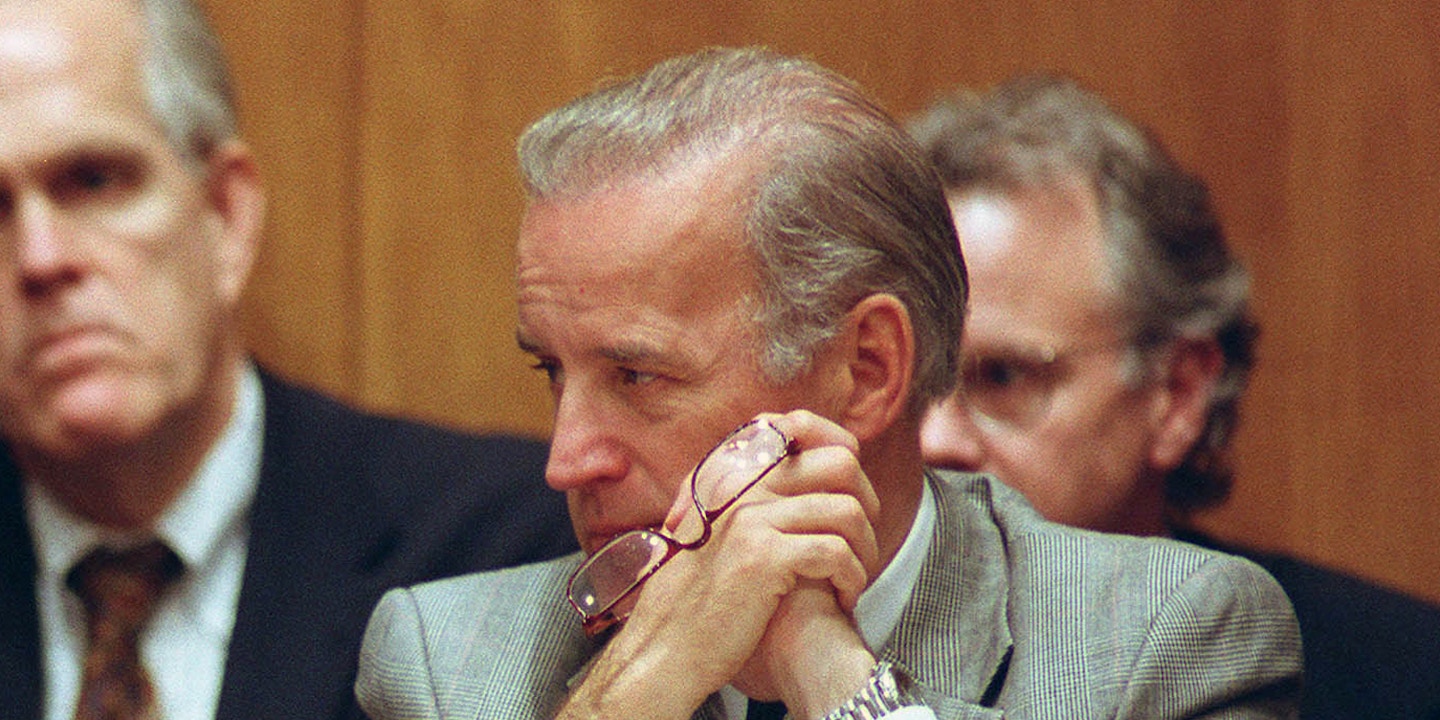 Former Vice President Joe Biden this week continued to maintain the fiction that he stood against the war in Iraq “the very moment” it began in 2003. The claim has been easily taken apart by fact checkers — Biden publicly supported the war before, during, and after the invasion — but a 1998 Senate hearing sheds additional light on his determination to confront Iraq over weapons of mass destruction.

In 1998, U.N. weapons inspector Scott Ritter resigned in protest and accused the international community of not giving him and his colleagues the support they needed to carry out their job in Iraq, which had agreed in 1991 to destroy its chemical weapons stockpile. He was called to testify before the Senate in September 1998, where Biden, who was then the highest-ranking Democrat on the Foreign Relations committee, grilled him. In the course of the questions, Biden made revealing remarks about where he stood on regime change in Iraq.

Biden thanked Ritter for forcing senators to “come to our milk,” by which he meant forcing them to make a decision on what to do about Iraqi President Saddam Hussein and his alleged weapons of mass destruction program.

Biden told Ritter that no matter how thorough the inspections, the only way to eliminate the threat was to remove Saddam Hussein. “The primary policy is to keep sanctions in place to deny Saddam the billions of dollars that would allow him to really crank up his program, which neither you nor I believe he’s ever going to abandon as long as he’s in place,” Biden said, characterizing former President Bill Clinton’s administration’s policy. “You and I believe, and many of us believe here, as long as Saddam is at the helm, there is no reasonable prospect you or any other inspector is ever going to be able to guarantee that we have rooted out, root and branch, the entirety of Saddam’s program relative to weapons of mass destruction. You and I both know, and all of us here really know, and it’s a thing we have to face, that the only way, the only way we’re going to get rid of Saddam Hussein is we’re going to end up having to start it alone — start it alone — and it’s going to require guys like you in uniform to be back on foot in the desert taking this son of a — taking Saddam down,” Biden said. “You know it and I know it.”

Hussein, it turned out, did not have an active WMD program.

During questioning, Biden mocked Ritter as “ol’ Scotty boy” and suggested that his demands — that the international community compel Iraq to cooperate with inspectors — if met, would give Ritter the unilateral authority to start a war in Iraq. Biden argued that such decisions belonged to higher-level officials. “I respectfully suggest they have a responsibility slightly above your pay grade, to decide whether or not to take the nation to war,” Biden said. “That’s a real tough decision. That’s why they get paid the big bucks. That’s why they get the limos and you don’t. I mean this sincerely, I’m not trying to be flip.”

He ended by redeploying his unusual idiom in thanking Ritter. “The reason why I’m glad you did what you did: We should come to our milk. We should make a decision,” Biden said.

Biden’s earlier suggestion that “taking Saddam down” was the only way to guarantee an end to the WMD program left little doubt where Biden would later come down on the issue.

Biden’s grilling of Ritter is important because it gives context to claims Biden later made: First, that when he voted in favor of the invasion of Iraq as a senator, he did not mean to vote for war, but hoped the resolution would empower inspectors to get back into Iraq and monitor the program. And second, that he never believed Iraq had weapons of mass destruction.

On the first claim, Biden told NPR last year that former President George W. Bush “looked me in the eye in the Oval Office. He said he needed the vote to be able to get inspectors into Iraq to determine whether or not Saddam Hussein was engaged in dealing with a nuclear program. … He got them in and before you know it, we had ‘shock and awe.’”

But according to Biden’s own statements in 1998, he believed that Hussein could never be trusted to eliminate his program, no matter how many inspectors were admitted.

In October 2004, by which time it had become clear there were no WMDs, Biden told an audience at the Council on Foreign Relations, “I never believed they had weapons of mass destruction.”

In fact, as Biden had said in 1998, he believed not only that Iraq had weapons of mass destruction, but no amount of inspections or diplomacy could guarantee their removal. That, he told Ritter, could only be done by “guys like you in uniform to be back on foot in the desert taking this son of a — taking Saddam down.”

Biden’s thought process puts critical hearings he held in 2002 as chair of the Foreign Relations Committee in sharper context. That summer, as the world was focused on the war in Afghanistan, from where the attacks of September 11, 2001, had been launched, Biden sought to begin “a national dialogue” on Iraq. During a series of high-profile hearings, he feigned neutrality, but his earlier questioning of Ritter leaves no doubt where he stood: Iraq had WMDs, and the only way to disarm Iraq with confidence was to depose Saddam Hussein. Biden, given his chairmanship, was a leading voice on foreign policy within the party. He had voted against the first Gulf War, waged by Bush’s father, and wasn’t considered a knee-jerk hawk. His support for the 2003 war made Democratic opposition ultimately untenable — even as Ritter, in the run up to it, loudly made the case against war, arguing that the WMD claims were overhyped.

Biden had reason to disbelieve the WMD claims. In a classified hearing on September 24, 2002, at the urging of a staff member, Biden asked then-CIA Director George Tenet what evidence of WMDs the U.S. had “technically collected.”

“None, Senator,” Tenet said, according to an account in the book “Hubris,” by Michael Isikoff and David Corn. Biden, wondering if there was some highly classified evidence, asked Tenet, “George, do you want me to clear the staff out of the room?” Tenet told him no. “There’s no reason to, Senator.”

“‘None, Senator’ — that answer will ring in my ears as long as I live,” the staffer later told the authors. Later in that same hearing, Biden heard from two government witnesses who rejected the “aluminum tubes” claim that had been circulating, and would later become a centerpiece of Secretary of State Colin Powell’s presentation to the United Nations.

Biden, to be sure, was not a full-throated advocate for the war on Bush’s terms, and throughout the fall, worked with Republican Sens. Richard Lugar and Chuck Hagel to try to build support for a narrower authorization, that would only allow Bush to attack Iraq for the purpose of dismantling a WMD program. But the effort was undercut by House Democratic leaders, and particularly Rep. Dick Gephardt, D-Mo., who pushed ahead with Bush’s broader resolution. “I was angry,” Biden later said, according to “Hubris.” “I was frustrated. But I never second-guess another man’s political judgment.”

Biden was also aware of the difficulty of invading and occupying Iraq, unlike some of his Republican colleagues. In February 1998, the News Journal of Wilmington reported that Biden saw invasion as unlikely.

Though some Republicans have urged the military to remove Saddam from power entirely, Biden said there was little will for that in Congress. Such a move would require a bloody ground war, the use of 300,000 to 500,000 ground troops, and some kind of continuing presence in Iraq while a new government is installed, he said.