This week’s final, complete confirmation of the El Mozote massacre 38 years ago holds critical lessons about the Trumpist war on the media today. 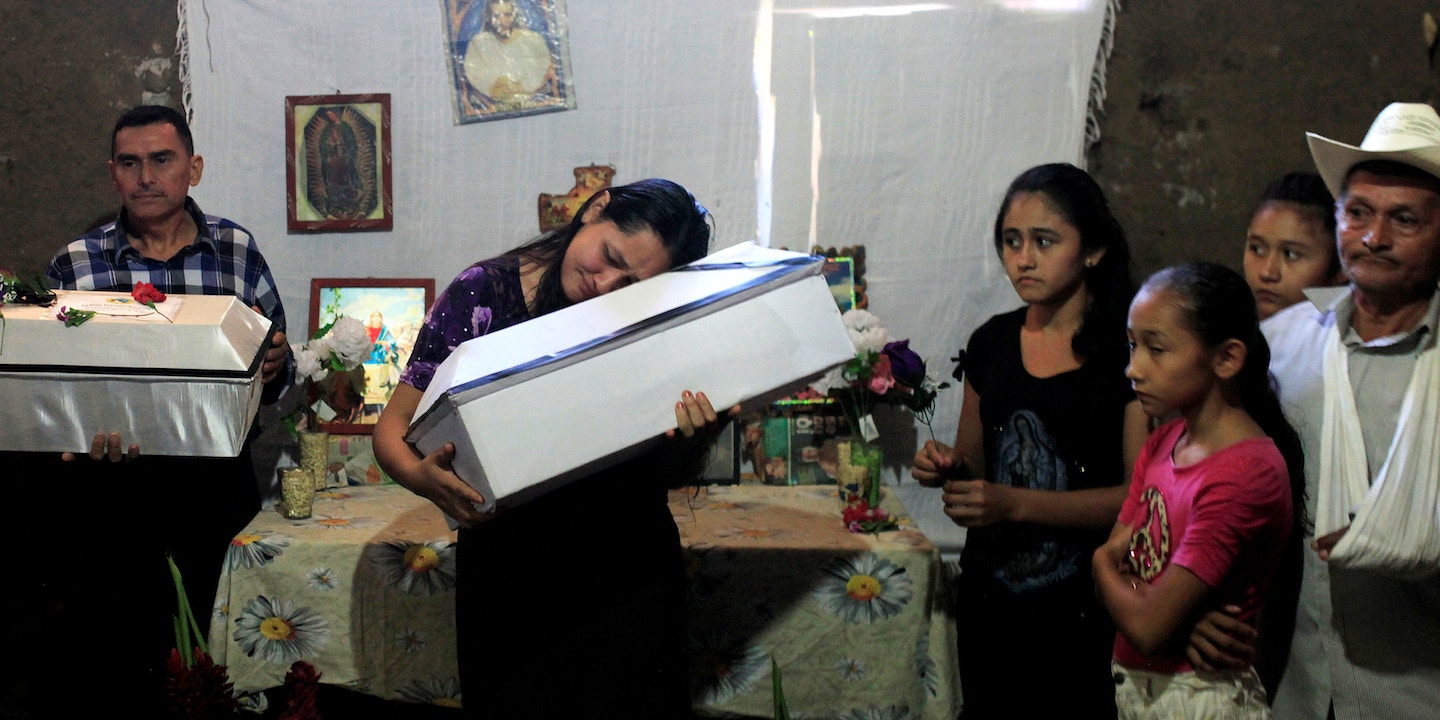 A retired Air Force general in El Salvador admitted in court last Friday that the country’s armed forces carried out the infamous El Mozote massacre in December 1981. This acknowledgement marks the first time the Salvadoran military has taken responsibility for the atrocity.

Over a period of days, the Atlacatl Battalion, a Salvadoran army unit created and trained by the U.S., slaughtered more than 800 civilian men, women, and children in several villages in the mountains near El Salvador’s border with Honduras. The Reagan administration immediately acted to protect its Salvadoran allies, engaging in a far-reaching coverup.

There was wholesale torture and rape, and many victims were burned alive. The level of cruelty is most comparable currently to the actions of the Islamic State. One survivor remembered hearing an officer threaten to murder a soldier who wasn’t willing to kill kids.

Today, Americans may see El Mozote as an obscure tale from the misty past. But this is not the case. In fact, this week’s final, complete confirmation of the events 38 years ago holds critical lessons about the Trumpist war on the media now.

Raymond Bonner, who broke the El Mozote story for the New York Times, says that assaults on journalism by the government have “gone to an extreme [under President Trump], but it’s certainly not new. … What happened to me is an example of attacks on reporting.”

The key things to understand about this war is, first, that it didn’t start with Trump, but rather with Richard Nixon almost five decades ago. Second, the right-wing fury at journalism has never been about the press’s many faults; instead, conservatives are most enraged when reporters do their job well. Third, officials who lie successfully are not punished, but are instead rewarded by the GOP apparatus for a job well done.

The Reagan administration entered office in January 1981 filled with fervor about rolling back communism in Central America. The Cuban revolution in 1959 had been bad enough. But then the Sandinistas had overthrown Nicaragua’s dictatorship in 1979, and left-wing guerrillas in Guatemala and El Salvador threatened to do the same to their autocrats.

In retrospect, it’s clear that these were “Inevitable Revolutions,” the title of one history of the period. Tiny, cruel white oligarchies had ruled over Indigenous peasants across the region for hundreds of years, and sooner or later, the dam was going to break. But to the Reaganites, this was all the work of the international communist conspiracy, headquartered in Moscow, and had to be crushed by any means necessary.

There was a roadblock to Reagan’s plans, however: Congress was queasy about the U.S. alliance with the Salvadoran government and had required the president to certify by January 29, 1982 that El Salvador was “making a concerted and significant effort to comply with internationally recognized human rights.” If it did not, all U.S. aid would be cut off. It was therefore unwelcome at the White House when word began circulating that something extremely bad had happened in the Salvadoran mountains. That New Year’s Eve, the head of the Salvadoran’s junta was forced to declare that rumors of a massacre were just “a guerrilla trick.”

Then came — from the perspective of the Reagan administration — catastrophe. On January 27, both the New York Times and the Washington Post published accurate, front-page stories about what had happened.

Thomas Enders, a career diplomat who at the time was assistant secretary of state for inter-American affairs, later said that “El Mozote, if true, might have destroyed the entire effort” in El Salvador. What to do?

The answer had been articulated by Richard Nixon years earlier. As was borne out by Nixon’s direct experience during Watergate, few things are more dangerous to conservative priorities than good journalism. Therefore, as a top Nixon aide later recalled, Nixon believed that it was necessary to “fight the press through … the nutcutters as [the president] called them, forcing our own news. Make a brutal, vicious attack on the opposition.”

The Reaganites shared this perspective. News outlets were “the opposition” that had to be brutally, viciously attacked, and individual journalists were fair game as a way to discredit their employers. Bonner was therefore caught in the White House crosshairs.

The pushback began with congressional testimony by Enders. “There is no evidence to confirm that government forces systematically massacred civilians,” he told a House subcommittee.

What about the number of victims? Bonner’s article had mentioned a list of 733 compiled by villagers, as well as a tally of 926 from a human rights organization. Elliott Abrams, who’d just taken office as assistant secretary of state for human rights and humanitarian affairs, informed the Senate that “the numbers, first of all, were not credible. … Our information was that there were only 300 people in the canton.” This was clear, conscious deceit on the part of Abrams. Both the Times and Post articles had mentioned that the massacre had taken place in several locations.

Then came the assault from the administration’s outside allies. On February 10, the Wall Street Journal ran a lengthy editorial headlined “The Media’s War.” Americans were “badly confused” about the situation in El Salvador thanks to the U.S. press. El Mozote was not a massacre, the Journal wrote, but a “massacre.” On the one hand, the number of dead had obviously been exaggerated and on the other, maybe the killing had been carried out by rebels dressed in government uniforms. Bonner was “credulous,” “a reporter out on a limb,” and, like reporters in Vietnam, a sucker for “communist sources.” One of the editorial’s authors appeared on PBS to proclaim that “obviously Ray Bonner has a political orientation.”

Accuracy in Media, the conservative media criticism organization, went further. Bonner, it declared, was waging “a propaganda war favoring the Marxist guerrillas in El Salvador.” Meanwhile, a Times editor later said, the administration was engaging in a “really vicious” whisper campaign about him.

“It was certainly perceived as if I were being punished.  … There is no question that this had a chilling effect on the reporting out of Central America.”

The message was received loud and clear in the executive offices of the Times. While Bonner considers Punch Sulzberger, then the publisher of the Times, to have been “a great, great man,” he also recalls that he “supposedly said to [Times editor] Abe Rosenthal, ‘Who the hell is this guy down there that’s causing us all the trouble?’”

In August 1982, Rosenthal pulled Bonner out of Central America and back to New York for additional “training” in journalism. Bonner believes that Rosenthal made this decision not simply due to his El Mozote coverage, but because Rosenthal was a committed anti-communist who felt that Bonner was generally too sympathetic to the Salvadoran guerrillas and Nicaragua’s Sandinista government.

Within the Times newsroom, says Bonner, “It was certainly perceived as if I were being punished. I had a reporter who told me, ‘I’m not going to let this happen to me.’ … There is no question that this had a chilling effect on the reporting out of Central America.”

This coincided with a period of Grand Guignol violence by the Salvadoran government and its allied death squads that’s truly beyond human comprehension. About 75,000 Salvadorans were killed during this time, the per capita equivalent of about 5 million Americans today. According to a later U.N. investigation, the government was responsible for 85 percent of the murders, all committed with U.S. arms and training.

For Bonner’s part, he quit the Times three years later in 1984. “When I told Abe I was leaving there were no tears shed,” he remembers. He eventually returned to work for the paper after Rosenthal’s retirement. Now 77, he owns a bookstore in Australia.

Meanwhile, the key personnel who squelched the story went on to greater and greater heights. Enders retired from government service and enjoyed a lucrative career on Wall Street. Abrams was later a member of George W. Bush’s National Security Council. Today, he is the special representative for Venezuela for the Trump administration.

Given how well pressure on the media worked with El Mozote, it’s no wonder that the U.S. right has used the same strategy over and over since. With the rise of conservative talk radio, and then Fox News, it’s become ever easier for politicians to simply ignore any inconvenient aspects of reality. Trump privately explained to journalist Leslie Stahl in 2016 that he strategically attacks journalism “to discredit you all and demean you all so when you write negative stories about me no one will believe you.”

Thus, while Bonner lived through a lot in 1981, he believes that “today it has gotten much worse.” Today, he says, “public officials simply lie with impunity,” and there doesn’t seem to be much anyone can do about it.