Donald Trump unveiled “a vision for peace” which permits Israel to annex much of the occupied West Bank, offering the Palestinians only limited autonomy. 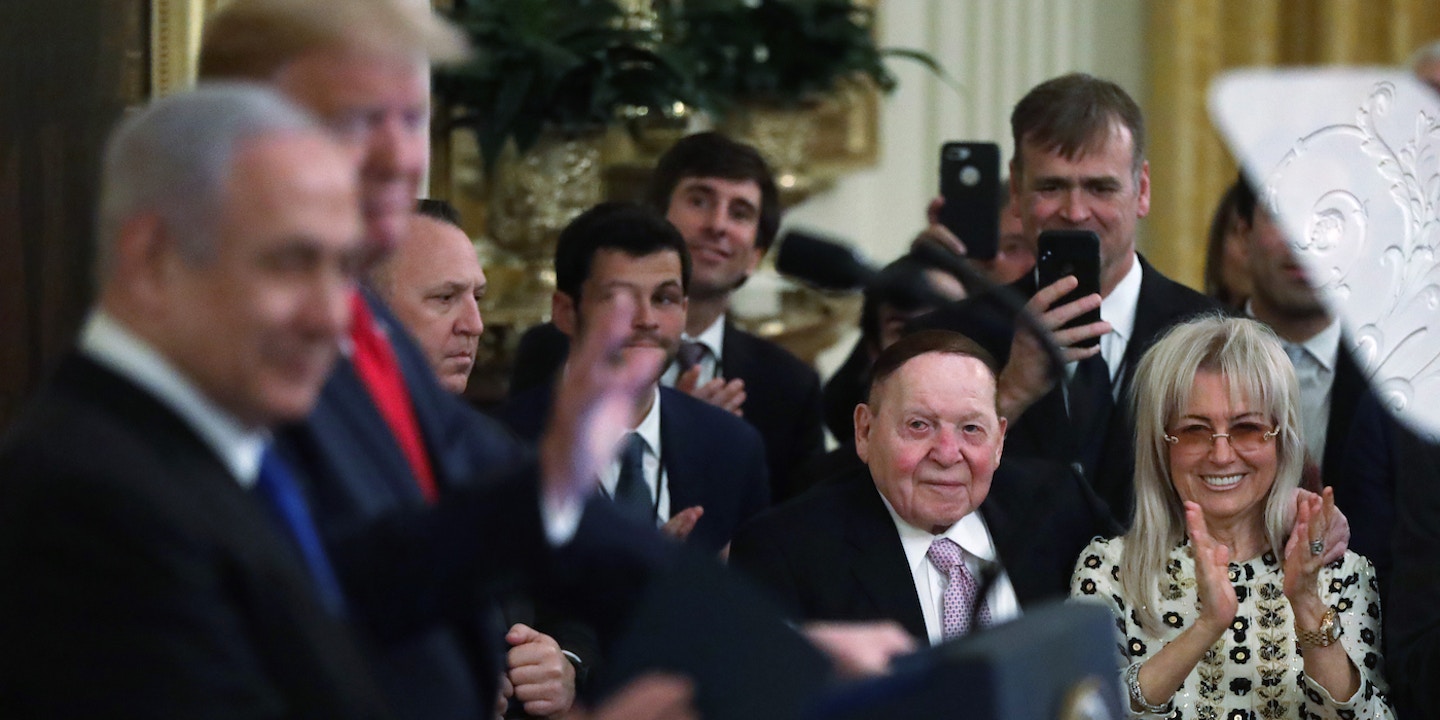 Flanked by Israeli Prime Minister Benjamin Netanyahu but no Palestinian leader, President Donald Trump unveiled “a vision for peace” in the Middle East on Tuesday which permits Israel to annex much of the occupied West Bank immediately, offering the Palestinians only local control in isolated Bantustans surrounded by Israeli territory.

As many Israeli political observers noted, the timing of the announcement, just hours after Netanyahu was indicted on corruption charges in Jerusalem, looked like an effort to boost the prime minister’s bid to win reelection in March, his best hope for avoiding prison.

A US President facing impeachment and an Israeli Prime Minister indicted for corruption, leading an interim minority government, are about to announce a plan to solve the conflict with the Palestinians, without any Palestinian present. Unbelievable farce.

The release of the 180-page plan — which was drafted by aides to Jared Kushner, Trump’s son-in-law and an old family friend of Netanyahu — was staged as a celebration, and acted as a dual campaign rally, with the American president and the Israeli prime minister boasting of all they had achieved for Israel to a room filled with far-right supporters of the Jewish state, including business magnate Sheldon Adelson, the Republican and Likud megadonor who spent millions of dollars to elect both leaders.

Trump, who intervened in a previous Israeli election campaign on Netanyahu’s behalf — by recognizing Israel’s annexation of the Golan Heights last year — gave the embattled prime minister a podium at the White House to detail conditions imposed on the Palestinians which sounded like terms of surrender.

To start with, Netanyahu said, the Palestinians would be required to recognize Israel as a Jewish state, cede the entire Jordan Valley, disarm Hamas, and abandon hope for both the return of refugees who fled homes in what is now Israel and for a capital in Jerusalem’s Old City.

In fact, as Crisis Group analyst Tareq Baconi observed, “The plan sets out parameters that are impossible for Palestinians to accept, and effectively provides Israel with a blueprint to sustain the one-state reality that exists on the ground.”

That sentiment was echoed by Hagai El-Ad, the executive director of B’Tselem, an Israeli rights group that monitors the occupation. “What the Palestinians are being ‘offered’ now is not rights or a state, but a permanent state of Apartheid. No amount of marketing can erase this disgrace or blur the facts,” El-Ad wrote. “The reality on the ground is already one of full Israeli control over the entire area between the Jordan River and the Mediterranean Sea and everyone living in it. It is a reality of one, inherently undemocratic, state.”

The plan was rejected by Palestinian rights activists in the region and abroad.

Netanyahu logic: If Palestinians agree to land theft, annexation, no refugee return, subjugation and no means of defense, Israel will negotiate with us.

They want to put us in permanent, high-tech cages and call it peace. #DealOfTheCentury #ApartheidDeal #Palestine #PalestinianFreedom

CNN interviews Palestinian human rights attorney on the Trump plan. "This is not a deal, this is a plan to consolidate Israel's colonial takings." @4noura https://t.co/dFfNuKnH08

#Palestinian refugees in Lebanon's Ein El-Helweh camp who have been deprived of a homeland for years protest and say NO to the so-called #DealOfTheCentury and tell Trump: Our fate is not for you to decide. pic.twitter.com/Y7We93iIRA

“An impeached and bigoted President works in tandem with a criminally indicted and racist Prime Minister to perpetuate the reality of apartheid and subjugation,” Jamil Dakwar, a Palestinian American who was born in Haifa and now leads the ACLU’s human rights program, wrote on Twitter. “Palestinians will not be coerced to give up their human rights to live as free and equal human beings.”

Saeb Erekat, the chief negotiator for the Palestine Liberation Organization, described the plan delivered by Kushner to Trump as “100 percent the ideas I personally heard many times from Netanyahu and his negotiators. I can assure you that the American so-called peace team have only copied and pasted Netanyahu’s and the settlers’ councils plan.”

Amid accusations that his plan was largely based on concepts and details dictated by Netanyahu, Kushner cast himself as an independent expert on the conflict in an interview with Sky News Arabia on Tuesday. “I’ve been studying this now for three years,” he told Sky News Arabia, “I’ve read 25 books on the subject.”

At least one of those books appears to have been written by Netanyahu, however. As Dylan Williams of the liberal, pro-Israel group J Street pointed out, Kushner’s plan appeared at one point to borrow language from one of the Israeli prime minister’s books.

On the left, an excerpt from Netanyahu’s book “A Durable Peace.”

On the right, the Trump/Kushner “peace” proposal.

I don’t know an academic integrity panel at any university that would let this fly. pic.twitter.com/NvgzWOsL2r

In a subsequent interview, Kushner even seemed unaware of the length of the proposal released by his team, referring to the 181-page document as “an over 80-page proposal.” He appeared to be echoing an error made by Trump during his prepared remarks the White House ceremony when he said, “our plan is 80 pages.”

Speaking in Ramallah, at a rare gathering of leaders of the major Palestinian factions, Palestinian President Mahmoud Abbas said that the proposal was not “the deal of the century,” as Trump and the Israelis described it, but “the slap of the century.”

“Trump, Jerusalem is not for sale. Our rights are not for sale. Your conspiracy deal will not pass,” Abbas said, in comments reported by the Israeli newspaper Haaretz.

While Trump said that Palestinians could eventually have a capital in Jerusalem, the plan suggested that this would be outside of the city, in a neighborhood close to, but not in the city, as Telegraph correspondent Raf Sanchez pointed out.

IMPORTANT: the detail plan of the plan confirms that Palestinians will not get any part of Jerusalem inside the security barrier.

That means they get a few far-flung eastern neighbourhoods as their capital but none of the Old City or areas where most East Jerusalemites live. pic.twitter.com/ZL6AJVJ565

Within hours of the plan’s release, Netanyahu said that his government would move on Sunday to formally annex the 131 Jewish-only settlements in the occupied West Bank, all of which are illegal under international law, as well as the Jordan Valley and the northern Dead Sea. The plan’s map of the newly expanded Greater Israel, and the fragmented Palestinian enclaves, were shared on Twitter by Trump.

In his remarks, Trump said that Netanyahu had “authorized the release of a conceptual map” showing the contours of the land to be annexed, and their two governments would soon form a joint committee “to convert the conceptual map into a more detailed and calibrated rendering so that recognition can be immediately achieved.”

Because the Israeli settlement blocs, which are home to more than 400,000 settlers, are stitched together with a network of roads and checkpoints that restrict the freedom of movement of Palestinians, the territory Trump said his plan “allocated” for a future Palestinian state would exist only as a series of enclaves inside Israel.

As Ben Silverstein of J Street, a liberal pro-Israel lobbying group in Washington, explained, the “conceptual map” included in the plan gave an “appearance of contiguity” that facts on the ground would make impossible.

This map is verrrrry generously shaded to give appearance of contiguity.

100% final map will appear closer to archipelago map on the right. pic.twitter.com/pLcaWak4R2

Yousef Munayyer, who directs the U.S. Campaign for Palestinian Rights, noted on Twitter that the reality would look a lot more like what the French illustrator Julien Bousac sketched out more than a decade ago for Le Monde Diplomatique to show the impossibility of a functioning state compromised of enclaves.

Daniel Seidemann, director of Terrestrial Jerusalem, pointed out that previous administrations had privately accepted the erosion of Palestinian hopes for a contiguous state.

Perspective, for those who think this started with Trump.

This is a slide/map, I presented to a senior official in the Obama White House. His chilling response: you’re probably right, but the sun still will rise, birds sing, and life will go on.

Shibley Telhami, a scholar of the region at the University of Maryland, pointed to another disturbing detail of the plan: a provision to further ethnically cleanse Israel by revoking the citizenship of Palestinians living in one section of the state, and forcing that region to merge with those parts of the West Bank not annexed by Israel.

One shocking feature of Trump's "American" plan is that Israel would carve out Israeli-Arab towns in the "Triangle" region, strip them of Israeli citizenship, and place them under Palestinian jurisdiction -- something majorities oppose. Un-American Plan. https://t.co/eQNFzRLvdG pic.twitter.com/bn143hVSRr

Trump’s plan was denounced by both Sens. Elizabeth Warren and Bernie Sanders, among the leading contenders for the Democratic nomination to challenge Trump for the presidency. While Sanders called the plan “unacceptable,” Warren went further, promising to “oppose unilateral annexation in any form — and reverse any policy that supports it.”

Trump's "peace plan" is a rubber stamp for annexation and offers no chance for a real Palestinian state. Releasing a plan without negotiating with Palestinians isn't diplomacy, it's a sham. I will oppose unilateral annexation in any form—and reverse any policy that supports it.

It must end the Israeli occupation and enable Palestinian self-determination in an independent state of their own alongside a secure Israel. Trump's so-called 'peace deal' doesn't come close, and will only perpetuate the conflict. It is unacceptable.

Former Vice President Joe Biden, a staunch defender of Netanyahu who reportedly frustrated Obama administration efforts to confront him over the occupation, did not immediately comment on the plan.

Politico reported on Tuesday that the Democratic Majority for Israel, a pro-Israel super PAC led by the Democratic pollster Mark Mellman, plans to run an attack ad in Iowa this week “that raises concerns about Bernie Sanders’ 2019 heart attack and calls him too liberal to beat President Donald Trump.”

As I reported earlier this year, the American Israel Public Affairs Committee, the conservative pro-Israel lobbying group known as AIPAC, paid for a pressure campaign on Facebook targeting Sanders, who would be the first Jewish president of the United States — one who has expressed concern for Palestinian rights and described Netanyahu as “a racist.”