SEIU is hailing the strike as the largest of its kind in at least five years, unfolding against the backdrop of a national political battle over health care. 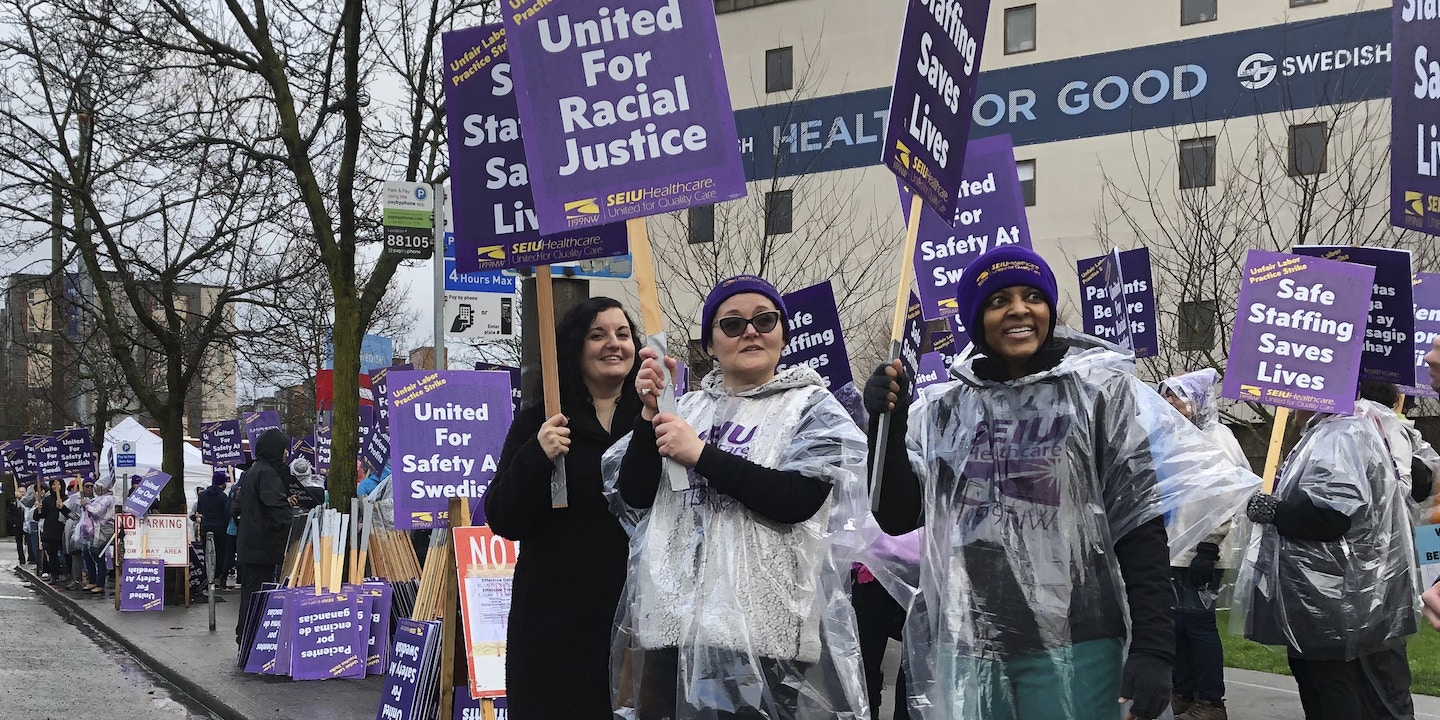 On Tuesday morning, nearly 8,000 nurses, nursing assistants, lab workers, environmental service technicians, dietary workers, clerks, and other hospital staff launched their first-ever strike — in a health care labor stoppage their union is hailing as the largest of its kind in the nation in at least five years. The workers, members of SEIU Healthcare 1199NW, have been protesting their region’s largest medical center, Swedish-Providence, which has resisted their demands for increased staffing levels and higher wages over nine months at the bargaining table.

While the workers have made clear since the start of their strike that they will return to work on Friday morning — in part because they could only afford to forego pay for three days — their employer has shelled out at least $11 million to fly replacement workers in from across the country, and suggested that many employees will be kept out of their jobs for an additional two days. During the strike, Swedish-Providence has closed two of its seven emergency departments, and one of its labor and delivery units.

The strike is unfolding with the backdrop of a national political battle over health care, soaring health insurance costs, and a growing shortage of nurses and other hospital workers across the country. Former Vice President Joe Biden, Sens. Elizabeth Warren and Bernie Sanders, and former South Bend, Indiana, Mayor Pete Buttigieg have tweeted in support of the strikers, and members of both the Warren and Sanders campaigns mobilized their Washington state supporters to join the picket line.

Also looming over the labor strike is the coronavirus: The first U.S. case was reported on January 21 in Snohomish County, just north of Seattle. “The virus is spreading, and we do not have the support to do real infection prevention,” said Editha Donovan, an environmental services technician at Swedish-Providence who has spent the last 17 years working to safely disinfect hospital rooms. According to KIRO-FM radio, a Seattle-Tacoma station, 43 people in Washington state had close contact with the patient before he received his diagnosis.

Tiffany Moss, a spokesperson for Swedish Medical Center, denied in an emailed statement to The Intercept that the health care conglomerate was considering a lockout, but noted their contracts with “replacement agencies call for a five-day replacement period” and said when the three-day strike ends on Friday morning, “We will call back caregivers who choose to strike as work becomes available.”

Labor advocates say that “becomes available” is the key phrase, since Swedish-Providence could say they won’t have work available until their contracts with the replacement workers end. Moss did not answer a follow-up question about whether all workers will be allowed to return to their regularly scheduled jobs on Friday.

In a letter sent to Swedish CEO Guy Hudson on Wednesday, Dow Constantine, the King County Executive, demanded answers about the potential lockout. “I have … learned that Swedish has not committed to returning all bargaining unit members to their positions at the end of the strike, January 31, at 7:30 a.m,” he wrote. “Instead, workers have been told that they may or may not be called back to work during a ‘replacement period,’ which continues until February 2, 2020. … Please immediately confirm that all striking workers will be returned to work at the end of the strike on their shift scheduled prior to the strike.”

In 2012, Providence, a large nonprofit Catholic health care system, took over Swedish, a smaller independent nonprofit. Longtime staff say ever since the acquisition, they’ve seen management prioritize profits, cut corners, and reduce standards of care. New research published this year in the New England Journal of Medicine found that among nearly 250 hospital mergers that took place across the U.S. between 2009 and 2013, health care quality did not improve as promised.

Another key sticking point in the negotiations is over safe staffing levels.

Lizette Vanunu started working for Swedish as a nurse in 1988. For more than 20 years, she has worked as a leader in a pediatric intensive care unit, and said over the last eight years, she’s seen standards decline dramatically.

“When I first worked at Swedish, it was known to be the best hospital in Seattle,” she told The Intercept. “Fast forward to 2012, and now experienced nurses leave because they can find better pay, benefits, and working conditions elsewhere.”

SEIU 1199NW says their employer struggles with recruitment and retention because wages are not keeping up with Seattle’s soaring cost of living, spurred largely by the region’s booming tech scene and its hostility to new housing. According to management’s data, 1,000 healthcare workers leave Swedish-Providence annually and of the 900 currently vacant staff positions, 600 of those are for registered nurses. Half of all vacancies, moreover, have gone unfilled for 60 days or more.

In her more than three decades of working as a nurse, Vanunu has never before been on strike. She also had never involved herself in her union before, until the Providence takeover. “I thought I needed to step up to the plate,” Vanunu explained, “to uphold the Swedish standard.”

“Safe staffing is what we’re really fighting for, so we can provide the highest quality care,” she continued. “The wage issue is secondary, but we need better wages so we can keep experienced people in our institution.” Research suggests nurse-staffing ratios can help improve care, especially for low-income patients. Linda Aiken, the director of the Center for Health Outcomes and Policy Research at the University of Pennsylvania School of Nursing told The Intercept in 2018 that their many studies “in the U.S. and around the world found for each additional patient that a nurse takes care of at one time, there’s a 7 percent increase in the patient’s likelihood of dying.”

Donovan, the environmental services technician, said she and her colleagues have far more difficulty doing their jobs than they used to, as her employer has cut positions and failed to fill vacancies.

“When I started working here, we had three people tasked to clean and disinfect each floor; now each floor just has one person,” she said. “When I started I was so proud, I was working at the best hospital people could go to, but our services are deteriorating. To get it all done in eight hours, you have to cut corners.”

Two other health care unions in the state — the Washington State Nurses Association and UFCW 21 — had their own monthslong battles with Providence, and only recently reached contract agreements earlier this month, after also threatening to go on strike. Their members have joined Swedish workers on the picket line this week.

Ruth Schubert, a spokesperson for the Washington State Nurses Association, told The Intercept the contract they won includes stronger language around staffing that Providence had initially resisted. “The threat of the strike is what moved them,” she said. “The strike threat was real and credible. We were ready to go.”