At Donald Trump’s latest campaign rally disguised as a coronavirus task force briefing, he was stunned by a tough question from Fox News. 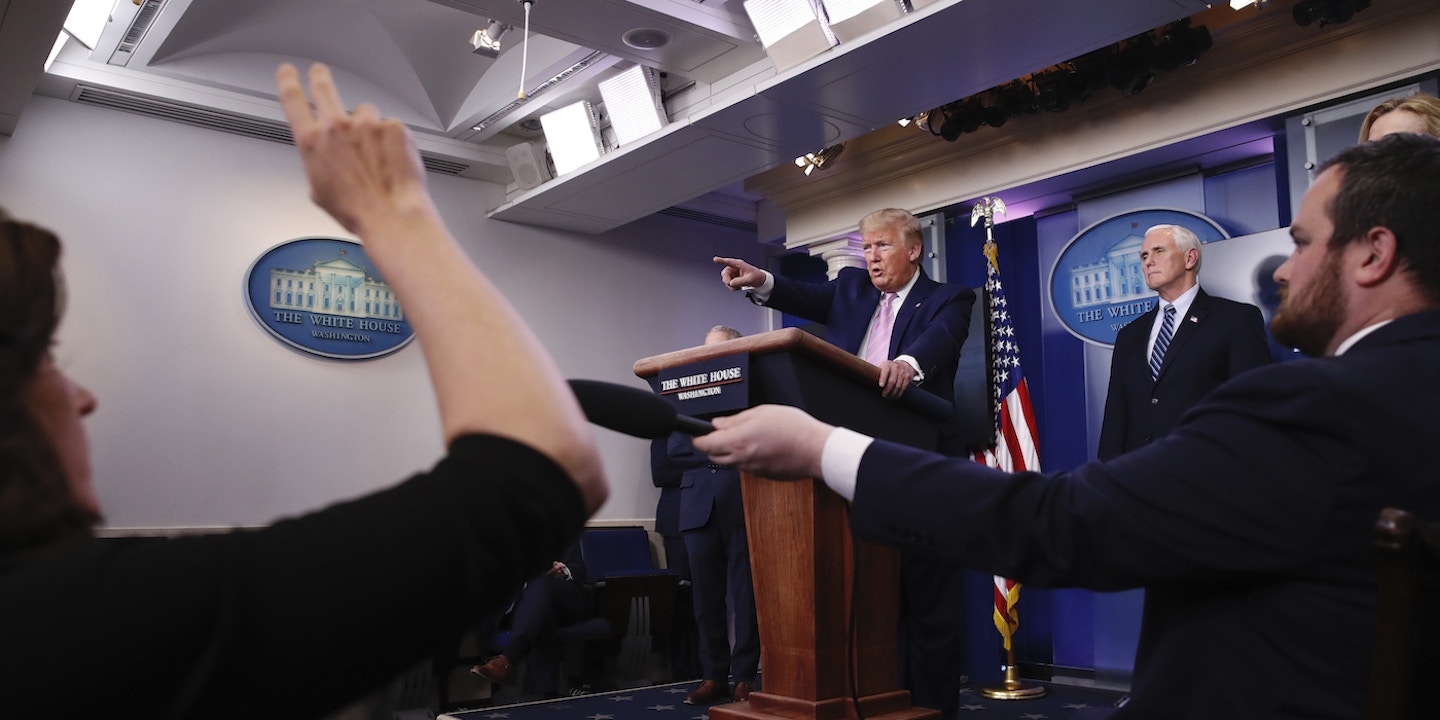 Donald Trump’s latest campaign rally disguised as a coronavirus task force briefing took a remarkable turn on Wednesday when he was stunned by a tough question from, of all people, John Roberts of Fox News.

Trump was sailing along, singing his own praises (“Did you know I was number one on Facebook?“) and denying any responsibility for the catastrophe when Roberts asked the president about the massive blunder of disbanding the White House pandemic preparedness team set up by his predecessor, former President Barack Obama.

Roberts raised the subject after Trump had trotted out his now familiar, if nonsensical, excuse of blaming Obama for his own administration’s abject failure to test Americans in sufficient numbers for the new coronavirus which emerged in China four months ago.

“Remember this, we inherited — the word is we inherited — bad tests,” Trump claimed, absurdly, of testing for a virus that did not exist when Obama left office three years ago.

“We really inherited bad tests, these are horrible tests,” Trump added, disavowing tests which were, in fact, created in January by the Centers for Disease Control under the leadership of a director he appointed.

That led Roberts to observe that officials from the previous administration have blamed the federal government’s slow response to the Covid-19 outbreak on the fact that Trump’s White House dissolved the National Security Council directorate for global health security and biodefense, which was dedicated to preparing for pandemics, in 2018.

“You have talked about the failings of the Obama administration, in leaving you with empty shelves and no plans,” Roberts began, uncritically repeating Trump’s false claims that he bears no responsibility for the poor state of the national stockpile of medical equipment he has overseen for three years. “They have said you got rid of the pandemic office in the National Security Council –” he added, before being cut off by Trump.

“We didn’t do that. That turned out to be a false story,” Trump claimed, falsely. “What are you, working for CNN?” the president asked sarcastically.

“No, no, no,” Roberts replied, retreating quickly. “I’m pointing out what they have said, and what you have said, that’s all.”

“I thought you were with Fox,” Trump cut in. “But Fox isn’t so easy, either, don’t kid yourself,” the president said, apparently forgetting that it is supposed to be a secret that the network’s role is to go easy on him and refrain from criticizing his months-long failure to prepare for the pandemic.

As Roberts objected — “It’s not about Fox or CNN” — Trump cut him off again. “Look John, let me tell you something. You know that’s a false story,” the president insisted.

Trump appeared to be affronted that the Fox correspondent had not, like many of his supporters, simply accepted as an article of faith claims by a former national security staffer, Tim Morrison, who argued last month that even though the global health security team was, in fact, disbanded, a new NSC unit with a combined responsibility for arms control and biodefense was a perfectly adequate replacement. Morrison, a Republican defense expert with a long record of undermining arms control agreements but no experience in public health, led the new counterproliferation team that was nominally charged with the very different job of preparing to respond to a pandemic.

“What you just said is a false story,” Trump said. “This doctor,” he continued, gesturing to Dr. Anthony Fauci, the nation’s top infectious diseases expert, “knows it better than anybody.”

By suggesting that Fauci would back him up on his false claim that the office was not disbanded, Trump briefly skated onto some very thin ice. In testimony to Congress just three weeks ago, the doctor was asked by Rep. Gerald Connolly, a Virginia Democrat, if it had been a mistake “to dismantle the office within the National Security Council charged with global health and security?”

Asked in March 11 it was a mistake to dismantle the NSC pandemic preparedness office, Dr. Fauci said: “I wouldn’t necessarily characterize it as a mistake. I would say we worked very well with that office. It would be nice if the office was still there.” pic.twitter.com/kwbhXlogv6

“I wouldn’t necessarily characterize it as a mistake,” Fauci answered, diplomatically. “I would say we worked very well with that office. It would be nice if the office was still there.”

Connolly was one of at least five Democrats in Congress who had written to the White House in 2018 to sound the alarm about the downgrading of pandemic preparedness when the NSC office was shuttered and its director, Rear Adm. Timothy Ziemer, was let go by the White House, just as the world was commemorating the 100th anniversary of the 1918 flu pandemic. “We fear these recent decisions will leave the United States vulnerable to pandemics and commit us to a strategy of triage should one occur,” Connolly and his colleague Rep. Ami Bera wrote to Trump’s national security adviser, John Bolton, at the time.

Rep. Elliot Engel also expressed his concerns publicly in a May 14, 2018 tweet, as the CNN reporter Andrew Kaczynski noted on Thursday. Sen. Sherrod Brown wrote to Trump four days later to demand that he put someone in charge of “preparing for the next pandemic threat.”

Not true, @realDonaldTrump. I wrote to you more than 600 days ago demanding answers after you fired the entire White House pandemic team. https://t.co/ICbHOkyeyY pic.twitter.com/71OF9gKA3N

That same day, Sens. Elizabeth Warren and Patty Murray wrote an urgent letter to Trump’s then-national security adviser, John Bolton, demanding a staff-level briefing on how planning for pandemic response would be carried out without the office. As Warren explained to David Corn of Mother Jones this week, Bolton refused to provide the briefing or to answer the six specific questions they asked in writing.

Hey, watch this video of my interview with @SenWarren, in which she recounts what happened in 2018 when she asked John Bolton and the Trump White House what they were doing to prepare for a global pandemic.pic.twitter.com/fXH7SxkoPt

Before Roberts could call Trump’s bluff by asking Fauci to comment, the president scolded the correspondent once more — “You shouldn’t be repeating a story that you know is false” — and quickly ended the exchange by calling on another reporter to ask a question.

At that moment, Trump was on the ropes, vulnerable to having his lie exposed if the reporter he called on had simply followed up on the question from Roberts by asking Fauci to set the record straight. But reporters in the White House briefing room are not known for that kind of cooperation, and Trump was let off the hook by a question on another topic.

Two weeks ago, when Trump was asked at a previous briefing about cutting the pandemic preparedness team, he said he knew nothing about it, and claimed to have no idea if it had even happened. His professed ignorance of such a major decision prompted speculation about whether he had even been consulted, and, if not, what role he plays inside his own administration.

In recent weeks, Trump has also professed ignorance about the looming threat of a global pandemic — saying repeatedly that no one could have imagined such a terrifying possibility. In fact, the consequences of shuttering the pandemic office were clear to many observers at the time. “When the next pandemic occurs (and make no mistake, it will) and the federal government is unable to respond in a coordinated and effective fashion to protect the lives of US citizens and others, this decision by John Bolton and Donald Trump will be why,” Stephen Schwartz of the Bulletin of the Atomic Scientists tweeted on May 10, 2018.

In testimony to Congress in 2018, Fauci said that he and other experts had indeed imagined just such a thing. “When you have a respiratory virus that can be spread by droplets and aerosol and… there’s a degree of morbidity associated with that, you can have a catastrophe,” Fauci testified. “The one that we always talk about is the 1918 pandemic, which killed between 50 and 100 million people,” he added. “Influenza first, or something like influenza, is the one that keeps me up at night.”

While Fauci has earned praise, and threats, for his willingness to gently correct Trump on the science of the coronavirus response at the briefings, some observers have urged him to go much further. Watching the daily briefing on Tuesday, the musician and actor Stevie Van Zandt erupted on Twitter when Fauci refused to criticize Trump for failing to urge governors of states that have not issued stay at home orders to do so.

I’m sorry but I’m sick of these motherfuckers who are supposed to be heroes pussying around with their fucking answers. Dr. Fauci was asked should every state be quarantining! Why can’t this fuck say YES! He goes into some bullshit about the guidelines! SAY YES MOTHERFUCKER! YES!

On Thursday, Van Zandt clarified that he was disappointed in Fauci but also outraged that he has been receiving threats that prompted increased security for him. “Whoa! My criticism of Dr. Fauci for not speaking out more forcefully for a national quarantine is the opposite of the assholes that are now threatening his life! Let’s be clear. We love Dr. Fauci! He is the voice of reason and logic and sanity. We wish he could convince the Pres.” Van Zandt wrote. “It is despicable that Dr. Fauci is being threatened.”

Updated: Thursday, April 2, 1:57 p.m. EDT
This article was updated to add information about warnings five Democrats in Congress sent to the Trump White House in May, 2018 about the potential dangers of eliminating the pandemic preparedness office of the National Security Council. A new comment from Stevie Van Zandt on the threats to Dr. Anthony Fauci was also added.