Evelyn Farkas’s campaign has received at least $100,000 from the defense industry, a host of lobbyists, and prominent Republicans like Negroponte. 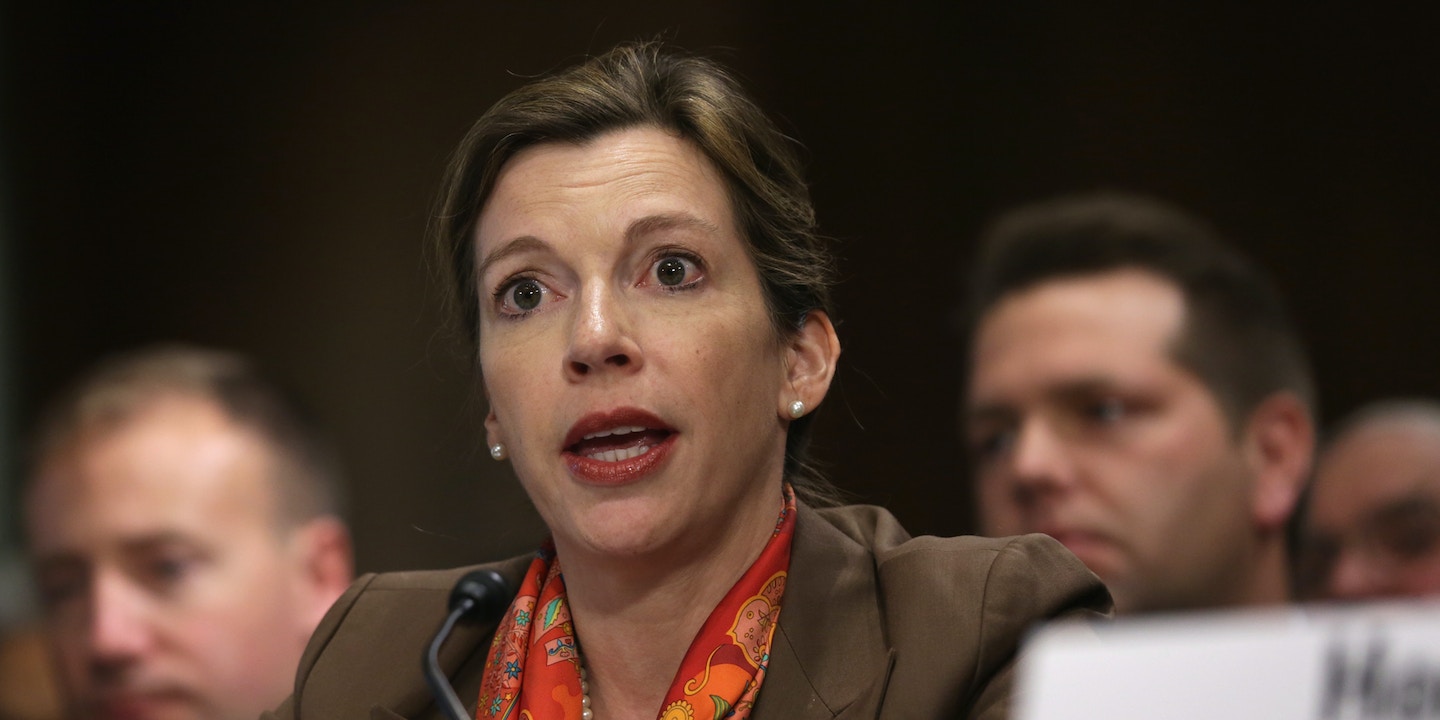 In the crowded race in New York’s 17th Congressional District, the top Democratic fundraiser — an alum of former President Barack Obama’s Defense Department — is receiving financial support from the defense industry; prominent Republicans, including a controversial diplomat who played a key role in the Iraq War; and lobbyists who have represented foreign dictatorships that are known human rights abusers.

Evelyn Farkas, who served as the deputy assistant secretary of defense for Russia, Ukraine, and Eurasia under Obama, has received campaign contributions of at least $100,000 from defense contractors and employees of lobbying firms, as well as government affairs professionals, according to her latest Federal Election Commission filings. Donors include executives at Lockheed Martin and Northrop Grumman; John Negroponte, the former director of national intelligence and ambassador to Iraq under George W. Bush, who helped make the case for the invasion of Iraq while U.S. Ambassador to the United Nations; and Ken Duberstein, Ronald Reagan’s former chief of staff. In addition to the defense industry, Farkas has also received contributions from companies and lobbyists representing the pharmaceutical, gun, health insurance, and tobacco industries, as well as from the heads of firms that represent major fossil fuel companies.

Farkas had raised a total of $924,610 by the end of March, according to FEC disclosures. Her top competitor in the field of at least eight Democrats is Mondaire Jones, another Obama alum from the Department of Justice. Jones, whose campaign is reliant on small-dollar donors and has raised $830,701, has the backing of high-profile progressives like Massachusetts Sen. Elizabeth Warren and the Working Families Party.

Jones is the least wealthy candidate in the race to replace Rep. Nita Lowey, who announced her retirement in October, and is the only one who had no assets to disclose. Adam Schleifer, the son of a pharmaceutical billionaire who opposes a wealth tax, is worth at least $31 million and would be the 10th richest member of Congress. He’s reported $2.3 million in fundraising, including $1.7 million of his own money. Schleifer represented big banks like Goldman Sachs and JPMorgan Chase as a private practice litigator at Wachtell, Lipton, Rosen & Katz, a New York-based law firm. More recently, as a federal prosecutor, he helped prosecute actor Felicity Huffman in the 2019 case of college admissions scams.

David Buchwald, a current state assembly member, is worth between $2.9 million and $4.2 million, according to disclosures. He has loaned his campaign $250,000 and contributed an additional $5,600. Farkas is worth somewhere between $565,000 and $1.5 million, and she has donated $2,800 to her own campaign. New York state Sen. David Carlucci, who was part of the Independent Democratic Caucus, a yearslong power-sharing scheme with Republicans that dissolved under pressure from progressives in 2018, has disclosed assets of between $518,000 and $1.1 million, is also in the race, having raised $277,399.

The primary in a safe blue district, which covers parts of New York’s Rockland and Westchester counties, is scheduled for June 23. While the coronavirus pandemic has drastically altered how all political candidates are running their campaigns, it presents particular challenges for candidates without deep pockets or industry backers who depend on in-person grassroots organizing to elevate their profiles.

Before New York Gov. Andrew Cuomo issued effective stay-at-home orders, Jones said canvassers working on his campaign were worried about knocking doors and shaking hands, and that it was already making things more costly. Schleifer, meanwhile, made an $80,000 ad purchase in March, more than 14 weeks from election day.

“Fundraising is unfortunately more important than I think it ought to be in elections,” said Jones, whose campaign has $544,024 cash on hand. “For people like myself, it should not be so difficult to run for elected office.”

Farkas’s campaign manager Wellesley Daniels declined to comment on contributions from the defense industry and people doing business for foreign governments committing human rights violations. “Dr. Farkas looks forward to the day when she is in Congress and can help pass campaign finance reform, so that candidates cannot buy elections with their own money or family money,” Daniels said. John D. Negroponte, vice chair of McLarty Associates, at the 2019 Concordia Americas Summit on May 14, 2019 in Bogota, Colombia.

Among the prominent Republicans who have donated to Farkas’s campaign is John Negroponte, director of national intelligence from 2005 to 2007 under Bush. Negroponte, who has given Farkas $1,000, was Bush’s U.N. ambassador from 2001 to 2004. When Iraq submitted a report at the end of 2002 declaring that it possessed no weapons of mass destruction, Negroponte declared it to be “an insult to our intelligence;” it was, in fact, completely accurate. Months later Negroponte sat behind Colin Powell during Powell’s notorious U.N. Security Council presentation, lending his seal of approval to Powell’s cavalcade of lies. Bush rewarded Negroponte for this performance on intelligence about Iraq first by naming him U.S. ambassador to Iraq, and then director of national intelligence.

Negroponte had previously served as ambassador to Honduras from 1981 to 1985 during the Reagan administration. While there he helped cover up extraordinarily egregious torture and murder by Honduran troops trained by the U.S. When a Honduran legislator asked him to speak out on human rights abuses, Negroponte told him that doing so would “let communism take over this country.” Declassified cables show that Negroponte also played a central role in the Reagan administration’s brutal attempt to overthrow the government in neighboring Nicaragua.

Farkas’s campaign also received $1,250 from Nelson Cunningham, president of McLarty Associates, started in 1998 by Richard Nixon’s secretary of state, Henry Kissinger, and first White House chief of staff to Bill Clinton, Mack McLarty. The firm does global lobbying on behalf of companies including Gilead — which sought exclusive profits for its coronavirus treatment drug and reversed course following reporting from The Intercept — Chevron, General Electric, and Walmart.

Her campaign also received $1,500 from Ken Duberstein, former chief of staff to Reagan, and $2,000 from Michael S. Berman, both of whom are executives and co-founders at the influential Duberstein Group. The firm represents a wide variety of defense, industrial, pharmaceutical, chemical, financial, and retail clients, including Pfizer, PhRMA, BP, Dow Chemical, S&P Global, the Business Roundtable, and Alibaba.

Mark Tavlarides, senior vice president of BGR Group, the third-largest lobbying firm in the U.S., also contributed $1,000 to Farkas’s campaign. So far this year, Tavlarides has lobbied Congress and the State Department on behalf of the governments of Azerbaijan and Bahrain, and Bechtel, an energy and construction company. In 2019, BGR’s top clients were Bahrain, India, and the American Health Care Association. The firm, which has deep ties to the George W. Bush administration, has represented Saudi Arabia (which it dropped as a client in 2018), China, Qatar, and Iraq; pharmaceutical giants like PhRMA; major defense contractors like Raytheon, Northrop Grumman, and Lockheed Martin, three of the largest defense contractors in the world; oil and gas companies like Chevron, and health insurance companies like UnitedHealth.

Farkas received $2,450 from Ken Close, founder and CEO of the Quincy group. The firm’s primary purpose is to help clients with business and foreign relations in Saudi Arabia.

Farkas received a total of $4,250 in contributions from Price Floyd, another Obama Defense Department alum who also worked in the State Department from 1990 to 2007, and currently directs campaigns and communications at the CT Group, also known as CTF Global. The firm’s top clients in 2019 were the U.K.-based Coal Trading and Utilities Limited, on issues impacting U.S.-Ukraine relations, and Air Products and Chemicals Inc., which sells gases and chemicals for industrial use.

Wendy Anderson, a Pentagon alum and senior counselor at Palantir, has contributed $2,800 to Farkas’s campaign. Palantir is a data analysis company funded by the CIA and founded by Donald Trump adviser Peter Thiel. Anderson was previously deputy chief of staff to Hagel. She also served as deputy chief of staff to Ash Carter, who succeeded Hagel to become Obama’s next defense secretary.

Farkas has also received contributions from weapons lobbyist Michael Herson and former army deputy secretary assistant Van Hipp Jr., both of whom are executives at American Defense International and donated $500 each. ADI is a lobbying firm whose clients include Raytheon, PCP Ammunition, and Elon Musk’s SpaceX. In 2018, ADI signed up to consult for the United Arab Emirates embassy in Washington, D.C., to help maintain the flow of U.S. military aid.

Farkas has received $250 from Pablo Enrique Carrillo, former chief of staff to late former Sen. John McCain who is now a lobbyist at Squire Patton Boggs, an international law firm and one of the largest lobbying firms in the U.S.

Farkas is campaigning on addressing climate change as a national security issue, ending subsidies to fossil fuel companies, reinstating a ban on assault weapons and banning high-capacity magazines, and mandating universal background checks, including at gun shows. She has taken a pledge not to accept money from the fossil fuel industry. She also supports a public health care option and is running on ending pharmaceutical industry price gouging. Farkas wants to create a pathway to citizenship for undocumented people and end for-profit detention centers. She also supports legislation for comprehensive immigration reform and “securing our borders.” Following investigations into foreign influence on the 2016 elections, Farkas has been outspoken on the need to investigate Trump’s susceptibility to foreign powers.

She has been endorsed by former Secretary of State John Kerry; former CIA Director and Secretary of Defense Leon Panetta; Foreign Policy for America, a nonprofit progressive foreign policy group; and several other current and former government officials.

Jones, meanwhile, is calling for reforms to an economic system that only works for the superrich, though he says he’s “not someone who vilifies Wall Street.” He is running on Medicare for All, a Green New Deal, a $15 minimum wage, ending right-to-work laws, expanding other labor and negotiation protections, and repealing the 1994 crime bill and the Hyde Amendment. Along with Warren and WFP, Jones, who would be the first black and openly gay member of Congress, has been endorsed by Massachusetts Democratic Rep. Ayanna Pressley; Democracy for America; Equality PAC, which supports LGBTQ candidates and allies for Congress; the Progressive Change Campaign Committed; the United Auto Workers, and New York Communities for Change.

He has sworn off fossil fuel and corporate PAC money, and drew a contrast between his campaign and Farkas’s. “From the start of my campaign, I have pledged not to take corporate PAC money or money from oil and gas executives,” Jones said. “I do not believe a member of Congress can effectively take on special interests, whether it’s the fossil fuel industry, the defense industry, or the pharmaceutical industry, when their campaigns are bankrolled by those same interests.”

Correction: June 11, 2020
A previous version of this article stated that Evelyn Farkas had accepted campaign contributions from a lobbyist for the fossil fuel industry, despite swearing off fossil fuel money. That donor, Mark Tavlarides, works at a firm that represents fossil fuel companies and has represented a company that does oil and gas work, but he has not directly lobbied on fossil fuel-related issues himself.