Trump Built His Own Green Zone. He Got the Wall He Deserves.

Concrete barriers have been placed around the White House, an echo of the Green Zone in Iraq where U.S. officials lived in fear behind walls. 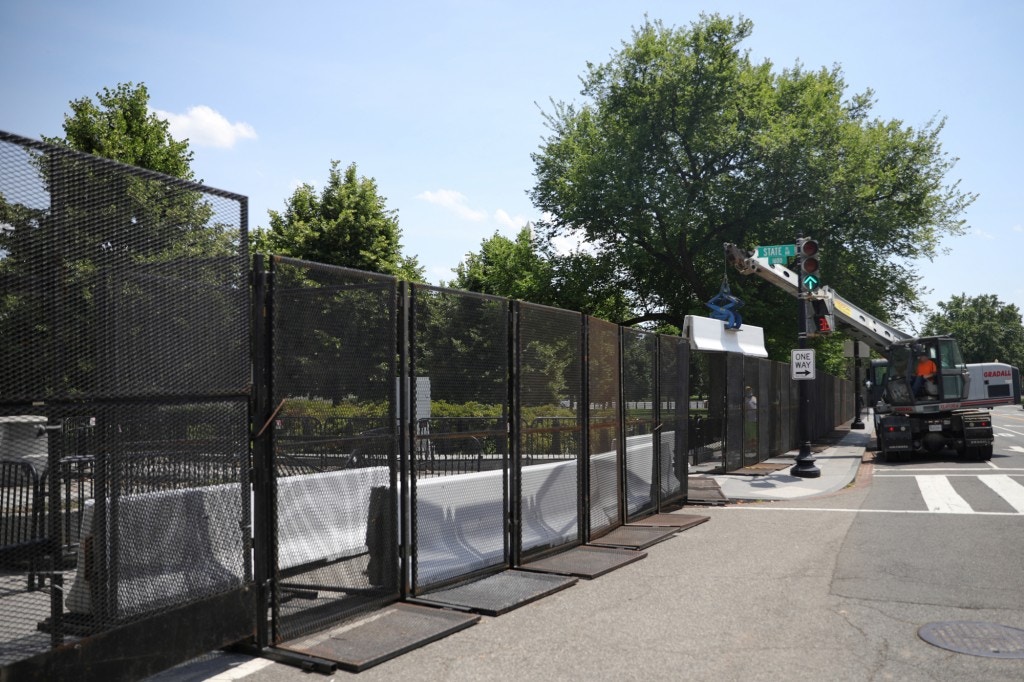 Concrete barricades are placed behind fencing outside of the Eisenhower Executive Office Building at the White House, following a night of protests near the White House in Washington, D.C., June 4, 2020.

An array of what might be described as the accessories and devices of dictatorship have expanded with infectious ruthlessness in American cities. The police swinging batons wildly, the paramilitary forces refusing to identify themselves, the hysterical president trying to incite war, the vigilantes in league with the police, military helicopters clattering overhead, the general marching in the streets in combat fatigues, the state TV network loosing its tales of sabotage and mayhem — it’s all there, loud and clear.

And Thursday, when 1.7 miles of cement barriers and wire fences were transported to the heart of Washington, D.C. and latched together to form an expanded perimeter around the White House, we even got our own Green Zone.

The Green Zone was the diseased heart of the U.S. occupation of Iraq. It was a jittery enclave in the center of Baghdad where American officials worked in once-opulent buildings that were encircled by a fearsome perimeter. The miles and miles of cement barriers that serpentined around the Green Zone were brutalist tombstones mutely announcing the fear and failure of the U.S. invasion. I got to know those blast walls while reporting in Iraq.

Trump’s Green Zone is not nearly as large as the one in Baghdad, and it is not threatened by suicide bombers or mortar shells; it’s a miniature in all respects, as is our president. It is a monument to Trump’s cowardice in the face of peaceful opposition, though perhaps we should call it the White Zone, given his ideology of white nationalism. Trump’s administration — and police forces across the country — have been hapless in everything except their viciousness against protesters who demand little more than to live in a country in which the judicial system does not destroy the lives of innocents, especially African Americans.

The fortification of the White House continues this morning. New fencing and concrete barriers being put up at the Penn/17th street side. This is normally wide open for visitors. ?@PoPville? #DCProtests pic.twitter.com/lVqlOEwDGB

Yet there it is, a government executive that has surrounded itself with walls and troops, besieged by forces that in a way are stronger than any insurrection might muster — the collapsing force of its own malignance, incompetence, and cowardice. This Green Zone or White Zone or whatever we should call it is not a projection of strength, not something to cower before. We might even want to celebrate it. While there is a tremendous amount of uncertainty about what will happen next, there is no greater sign of the failure of a political or military enterprise than the fact that it has to seal itself off from the general population in what it hopes and prays is an impenetrable fashion.

A screenwriter could not have crafted a better arc, the return of the Green Zone, and it’s not an entirely contrived plot twist. Trump is an ill culmination of many deformities in American politics and culture, including decades of militarism overseas and deceptions at home that have impoverished the country literally and morally. Empires tend to collapse as a result of such errors — it’s worth remembering that the Soviet Union was to a great extent killed off by Afghanistan and Chernobyl, while America got Afghanistan, Iraq, and Covid-19. “When the truth offends, we lie and lie until we can no longer remember it is even there, but it is still there,” noted a heroic Soviet scientist in “Chernobyl,” the HBO miniseries about the 1986 nuclear meltdown. “Every lie we tell incurs a debt to the truth. Sooner or later that debt is paid.”

So the debt of lies and racism and militarism must be paid in America; Trump is probably hastening the reckoning, though we might have been destined to have our own Green Zone at some point, or some other startling representation of the bottom being reached. It’s oddly fitting, after all, that the troops summoned to the Washington, D.C. area included the 82nd Airborne Division, which participated in the invasion of Iraq and fought there throughout the years. (I even wrote about an 82nd Airborne company as it tried to secure one of Baghdad’s oil refineries from post-invasion looting.) So this is a reminder of the debt we are paying for sins committed by our leaders over the years and decades: Soldiers from a famous unit that once trotted around Baghdad’s Green Zone are called to Washington, D.C., where they are just as out of place as they were in Iraq.

There is a final irony to the barricaded White House that’s almost too obvious to mention. A president who came to office promising to build a beautiful wall at the southern border to protect the nation from foreigners has instead erected a pathetic one to protect himself from his own people. Trump has gotten some of what he deserves. His tiny Green Zone is not a prison, but it’s a verdict on what he’s done.

Is This Trump’s Reichstag Fire Moment?