The charges carry a mandatory minimum of 45 years in prison — and a maximum sentence of life. Experts say the prosecution is wildly disproportionate. 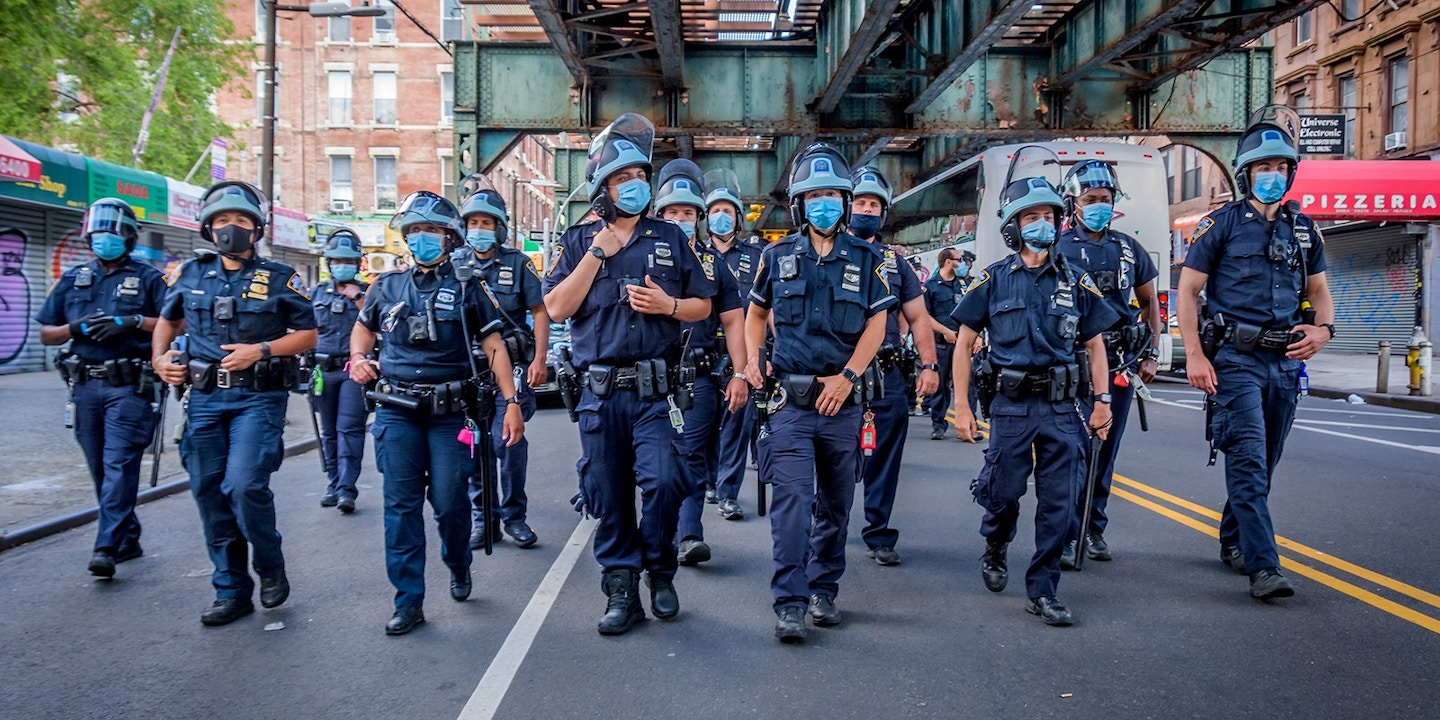 The killing of George Floyd by Minneapolis police in late May ignited protests in cities and towns across the United States. These largely peaceful demonstrations have been punctuated by acts of violence, frequently committed by the police themselves. But other incidents of both violence and property destruction have also been reported. Among them was the case of two young Brooklyn lawyers accused of burning the dashboard of a New York Police Department cruiser — a case that has become a flashpoint in the Trump administration’s legal and public relations response to the protests.

Urooj Rahman, 31, and Colinford Mattis, 32, are accused by the government of tossing a Molotov cocktail through the broken window of an empty police cruiser in the Fort Greene neighborhood of Brooklyn, New York. The alleged incident, said to have been caught on video, took place during the early hours of May 30, amid the wave of protests.

The government has not suggested that Rahman and Mattis harmed anyone or intended to do so. According to reports, the empty police cruiser had already been vandalized and damaged amid rioting in Brooklyn that night. The device, which failed to ignite properly, burned part of the driver’s console in the abandoned vehicle.

“If you consider what these individuals are accused of doing — throwing a Molotov cocktail into an already abandoned police vehicle and charring its dashboard — the potential punishments are clearly wildly disproportionate.”

Yet the potential punishments they now face for tossing the incendiary are staggering. Following a raft of new charges announced by federal prosecutors last week, the two lawyers — neither of whom have previous criminal records — now face a mandatory minimum of nearly half a century in prison if convicted of the charges. The maximum penalty in the case is life imprisonment.

“If you consider what these individuals are accused of doing – throwing a Molotov cocktail into an already abandoned police vehicle and charring its dashboard — the potential punishments are clearly wildly disproportionate,” said Lara Bazelon, a professor and director of the Criminal Juvenile Justice and Racial Justice Clinical Programs at the University of San Francisco School of Law. “They are facing a mandatory minimum of 45 years in prison if convicted. A judge sentencing them would have no choice but to give them that amount of time.”

Rahman and Mattis’s cases have drawn attention in part due to the story’s sensational nature: two well-educated young lawyers who allegedly engaged in an act of symbolic revolution against a marker of police authority. But the case now seems to be transforming into something darker: a tool for the Trump administration to send a message to its political opponents. The government recently took the extraordinary step of appealing the accused’s bail conditions and sending them back into pretrial custody, a decision more common for prosecutions of violent organized crime and terrorism. The move prompted 56 former federal prosecutors to file an amicus brief in protest.

With the administration ominously vowing to “dominate the streets,” even relatively innocuous acts of rebellion like property damage now stand to be punished with the most draconian legal tools available to the federal government. Thousands of people across the country have been detained amid the protests. But very few of these cases have come to public prominence the way that Rahman and Mattis’s have. In some respects, their backgrounds may seem atypical of many of those detained in recent weeks. Mattis is the son of a Jamaican immigrant who grew up in the impoverished Brooklyn neighborhood of East New York and went on to practice corporate law in Manhattan after graduating from Princeton and New York University. Rahman, the daughter of working-class Pakistani immigrants in Brooklyn, is a public interest lawyer in the Bronx. (A disclosure: I encountered Rahman at past social gatherings in New York City, though we have never spoken.)

A steady stream of provocative leaks to local tabloid news outlets following the arrests has helped make the pair widely known. An edited excerpt from a four-minute video interview Rahman gave to an independent news outlet on the night of the alleged incident was published by the New York Daily News, in which Rahman seemed to make threats of harm against police officers. The unedited version of the interview, which appeared on the YouTube page of the news site LoudLeaks, seemed to adjust the meaning of what she had said: Rather than harming officers, Rahman appeared to be referring to property damage against police department equipment as an inevitable consequence of unpunished police abuses.

The sensationalism of the story seems to have outrun the actual details of the case. Although the alleged crime the pair committed was against an abandoned, already vandalized car — rather than innocent people — breathless reporting has described the case in terms of incomprehensible violent radicalization.

Though the cases appear to have no connection, the Department of Justice announced the charges against Rahman and Mattis along with the arrest of another woman, Samantha Shader, who is facing more serious accusations of throwing a Molotov cocktail at an NYPD cruiser in which several officers were actually sitting. In a statement last week, the government announced the additional, more serious charges in all three cases.

Experts said that these new charges, which brought along the severe mandatory minimum sentences, significantly change the dynamics of the case. Faced with mandatory minimums of decades in jail if convicted at trial, defendants often feel pressured to plead guilty to even the most unfair charges if it ultimately means spending less time behind bars.

“Mandatory minimums are often criticized for being used by prosecutors to create leverage for plea bargaining and also because they happen to be disproportionately wielded against minorities,” said Fiona Doherty, a professor and director of the Jerome N. Frank Legal Services Organization at Yale Law School. “It completely shifts the power dynamics of the case, because it allows the prosecution to effectively determine sentences and takes power out of the hands of a judge who might weigh the charges against other factors.”

One might chalk up the draconian legal moves in this case as a bid to reestablish “law and order.” But, like most instances in which that phrase is invoked, a healthy dose of politics seems to be undergirding the government effort. In this case, it appears to be a public relations move in keeping with the politics of President Donald Trump’s administration.

In a June 4 press release, Attorney General Bill Barr laid down a marker for how the administration planned to respond to the ongoing national unrest. Barr’s statement acknowledged the apparent injustice of Floyd’s killing, but also darkly warned of “extremist agitators who are hijacking the protests to pursue their own separate and violent agenda.” The Attorney General raised the specter of foreign involvement in the protests, mentioning the alleged role of antifa, an amorphous decentralized movement that Trump has threatened to designate as a domestic terrorist group. (Police and federal agents interrogating protesters have invoked antifa in their lines of questioning.)

Lacking clear targets, it seems that the administration latched onto the case of Rahman and Mattis to construct a public narrative about who has been protesting and why. Trump, his son Donald Trump Jr., and Republican Sen. Marco Rubio have all promoted news of the case on social media, helping amplify the political importance of prosecution. By all accounts, the Trump administration is going to incredible lengths to involve itself in the case, elevating it from the state to federal level based on the strained argument that the New York Police Department engages in interstate commerce by importing its cruisers from outside of New York.

Legal observers said that the Trump administration is likely playing a role in the prosecution’s extremely punitive approach, pushing for the harshest possible charges, sentences, and pretrial treatment.

“The fact that the federal government has bent over backwards to find a federal-jurisdictional hook for such cases is intended to send a chilling message to activists.”

“When you look at the offenses alleged against Ms. Rahman and Mr. Mattis, normally you’d expect them to be tried under state law in state court,” said Ramzi Kassem, a City University of New York School of Law professor and founder of the Creating Law Enforcement Accountability & Responsibility project. “The fact that the federal government has bent over backwards to find a federal-jurisdictional hook for such cases is intended to send a chilling message to activists.”

Kassem also drew a contrast between the administration’s treatment of anti-police brutality protesters and the punishments meted out to cops actually accused of killings. “The Trump Justice Department’s aggressive approach towards cases involving protesters only further highlights its indifference towards police violence,” he said. “You can compare the zeal with which Trump’s prosecutors are fighting to keep these two people behind bars for an alleged property crime with the tepid efforts they’ve mounted to investigate police officers who have killed unarmed black people. That should tell you everything you need to know about the hierarchy of values within the Trump administration.”

The next hearing in Rahman and Mattis’s case is scheduled for June 23. In the meantime, the allegations against them continue to take on political connotations wildly disproportionate to the stated facts of the case. While the administration has not claimed that Rahman and Mattis were involved in any broader foreign or domestic terrorist movement, Trump-aligned extremist media operatives appear to have taken the hint to make their own linkages, fomenting increasingly wild conspiracy theories about the defendants’ connections.

The fervor building around this case — which, beneath the escalating public furor, remains about an incident of alleged property damage — suggests to some experts that politics is railroading basic standards of judicial fairness.

“Prosecutors are not supposed to be beholden to politics, but the way in which this case is being handled suggests an approach that is highly politicized,” said Vincent Southerland, executive director of the Center on Race, Inequality, and the Law at New York University’s law school. “In addition to the extremely harsh potential sentences, it is exceedingly rare for the Department of Justice to go to this extent to appeal the granting of bail. Altogether it suggests that the government is trying to make an example out of these people to send a message to the public — a message of fear with regards to the people taking part in these protests.”