People were moved between private facilities amid the coronavirus outbreak despite the fact that the Bureau of Prisons said it would stop transfers. 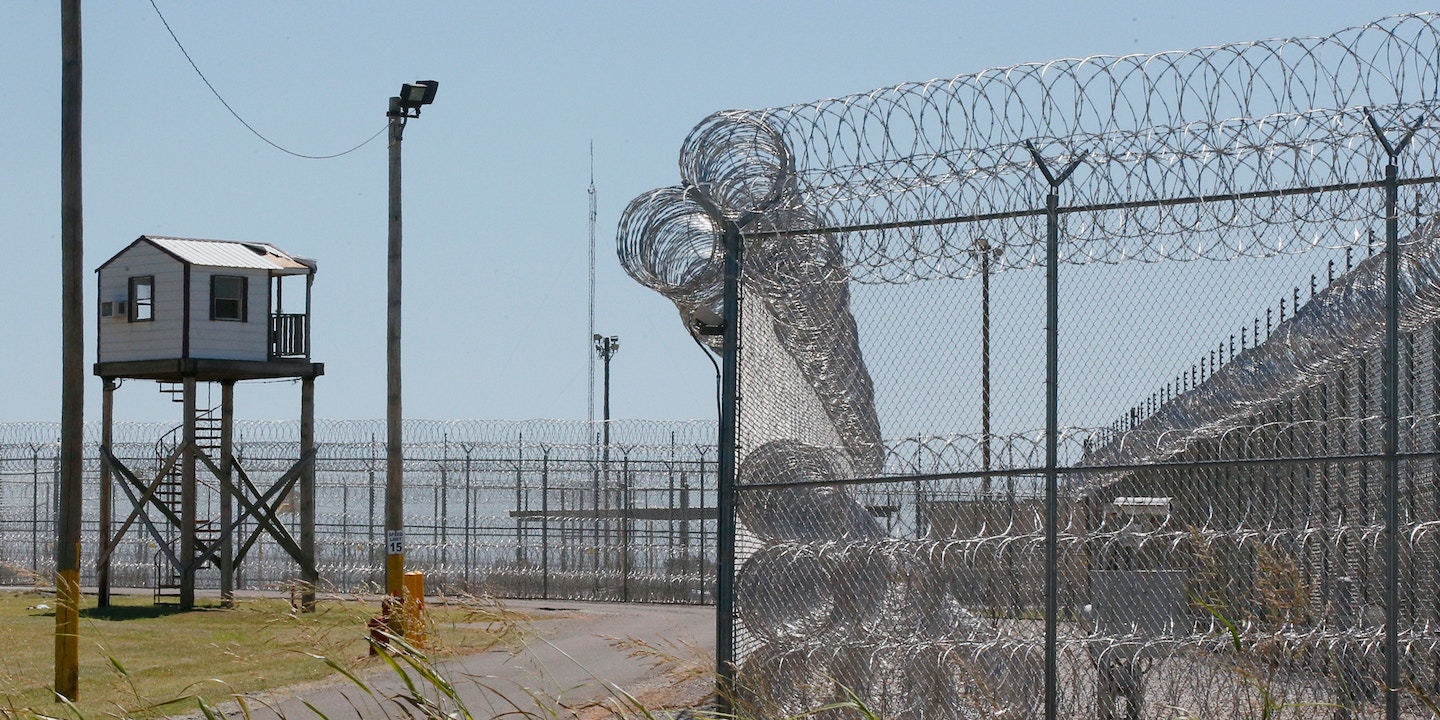 By mid-March, it was clear that the coronavirus thrived on physical proximity, particularly indoors, and that prisons were ticking time bombs of infection. Around that time, the Federal Bureau of Prisons announced policies to temporarily cease transferring prisoners between different facilities, with the aim of stopping the spread of the virus.

This prohibition did not extend to Criminal Alien Requirement, or CAR, prisons, a shadowy network of facilities overseen by the Bureau of Prisons but run entirely by private contractors and used exclusively to house noncitizens serving federal sentences, often for immigration-related offenses. CAR facilities tend to fly under the radar in debates over conditions in federal prisons or ICE detention centers, owing to the gray area they inhabit between immigration and criminal detention.

As one such prison, Taft Correctional Institution in Kern County, California, was preparing to close at the end of April, hundreds of people were moved out and sent around the country, heedless of the Covid-19 threat.

People transferred from Taft and family members who spoke with The Intercept described packed airliners flown out of Bakersfield airport with hundreds aboard. Many were sent to the North Lake Correctional Facility in Michigan, run by the private prison giant GEO Group. According to people inside, the prison administration was wholly unprepared to deal with the influx.

Hundreds of people were moved out of Taft Correctional Institution and sent around the country, heedless of the Covid-19 threat.

Gil, who says he was part of a group of 120 people moved from Taft to North Lake in April, asked a corrections officer if North Lake would be getting more transfers. “They said ‘We’re not taking in no more people.’ So we ask them why they brought us here. He said that was an emergency because they closed down the [Taft] prison,” said Gil, who asked his full name not be used for fear of being retaliated against by prison staff. “They said they weren’t ready for us. … One day they came into work, and they told them, ‘Hey, we’re getting 500 people here, so you guys got to be prepared.’”

BOP spokesperson Emery Nelson said that while the agency had indeed halted transfers on March 12 in response to the coronavirus crisis, people were moved “to allow for necessary repairs and construction to be completed at the Taft facility.” He added that people from Taft “were screened in accordance with CDC guidelines prior to leaving the facility,” and that they were quarantined upon arrival at new centers, with symptomatic detainees being tested for the virus.

However, people inside and their family members say that while new transfers are being kept apart from the general population, not much else is being done to control for the spread of coronavirus. Ricardo Limón, who said he was moved with a group of about 130 inmates from Taft, said that the kitchen was staffed by a group of incarcerated people who served both the Taft transfers and the rest of the jail. According to him, corrections officers had removed a coronavirus-positive person from the transfer population only to return him seven days later and place him with a new cellmate.

“We were asking, ‘Why are you bringing him if you know he’s contagious?’ and he said, ‘We don’t know if he’s contagious or not.’ So I said, ‘You’re bringing him and just praying he doesn’t infect us?’” Limón recalled the guard replying, “I don’t have anywhere to put him, the clinic is full, and he’s the one with the fewest symptoms.”

Emilio Martínez described the same experience from the opposite perspective. He said he’d been transferred from Taft to North Lake on April 2, and by April 22 he’d tested positive for Covid-19. “About two weeks [after arriving] I started feeling feverish, my bones hurt, I was tired and very sleepy,” he said. He was taken away to an area reserved for symptomatic detainees, where he said he was kept for two weeks with only minimal supervision. “They’d come in, take my temperature, and say, ‘It’s OK, you’re OK,’ and then they’d close the door and leave. They wouldn’t check up on you all day, just in the morning and the afternoon. The whole night would go by without anyone coming to check in. You could die there.”

Despite what he said was a litany of health issues including diabetes, high blood pressure, high cholesterol, and a hip replacement, he described only being given aspirin to deal with the aggressive respiratory disease. Now back in general population, he still can’t taste or smell anything and remains fatigued at all hours. “They told me to drink a lot of water, and to exercise,” he scoffed. He’s not sure if he was still infectious when returned to the larger group.

In a meeting with higher-level officers and a member of the jail’s management, Limón and other people being held at North Lake suggested that everyone be tested, to which an official responded, “We don’t have the budget to do test everyone, it’s not as easy as you all think.” (Nelson, the BOP spokesperson, declined to say how many people had been tested at North Lake and other CAR prisons.) Limón is particularly anxious to avoid exposure given that he contracted Valley fever, a fungal infection that affects the lungs, while imprisoned at Taft. “If I get infected with the coronavirus with this Valley fever stuff I have, I’m going to die,” he said.

Gil and some family members of people held at CAR prisons independently brought up concerns with people being put back into general population days after being removed due to Covid-19, and with a lack of testing. Gil said one man in his pod was symptomatic for four days before he was removed and tested, and then brought back less than a week later. Several people also brought up a lack of adequate cleaning materials, including being instructed to wash common areas with water containing just a little bit of diluted bleach.

“If I get infected with the coronavirus with this Valley fever stuff I have, I’m going to die.”

While the bulk of recent transfers to North Lake were from Taft, some people were apparently transferred in from other prisons as well. Amy (who asked for privacy reasons to be identified only by her first name), whose husband is serving a federal sentence for illegal reentry after attempting to return to his U.S. family following a deportation, said he had been held at Great Plains Correctional Institution in Oklahoma until “it all started outbreaking. That’s when they moved him to Michigan.” In Oklahoma, she said, he had met people who had recently left California, some of whom were on their way to Michigan.

Great Plains had the earliest acknowledged spike of Covid-19 cases among CAR prisons and now is second only to North Lake, which has had a reported total of 104 cases, 91 of them “recovered,” according to BOP, as of this week. So far, at least two people imprisoned at North Lake have died from Covid-19, and one more at the McRae facility in Georgia. According to Gil, at least one of them was a transfer from Taft.

Both people who were held there and the BOP agree that there were no coronavirus cases at the Taft facility, meaning that those moved out and to Oklahoma and North Lake may well have been put in harm’s way by the transfers, especially given the unpreparedness of the destination facilities.

The North Lake facility had just been reopened as a CAR prison late last year, after having operated as a maximum-security state prison until it closed in mid-2017. Part of the difficulty in coordinating an effective response to the coronavirus seemed to be a culture that retained the posture of maximum security, even though the prison no longer is.

A Canadian woman whose husband has been at North Lake since February told The Intercept that he has spent weeks in solitary confinement after being accused of helping organize a hunger strike inside the facility and lodging a complaint against a guard who threatened him. “He’s in there trying to advocate for these men and help them,” she said. “They just basically threw him in a dungeon.”

Since the BOP began to use all-noncitizen prisons in the late 1990s, the centers have operated in a sort of blind spot for both immigration watchdogs who tend to focus on ICE detention, and criminal justice watchdogs who mostly concentrate on standard federal prisons. The fact that the centers are all run by contractors but overseen generally by the BOP allows both groups to employ the strategy (oft-used in the ICE detention context) of deflecting blame to the other for any shortcomings.

Asked for comment about the preparations to move all the inmates out of Taft, a spokesperson for the Management and Training Corporation — the private contractor that ran the facility — wrote, “The BOP determines and coordinates all inmate movement including those transfers that you’re referring to.” A representative of the GEO Group, which runs both Great Plains and North Lake, wrote “as a service provider to the federal government, our company plays no role in decisions related to the assignment, release, or transfers of individuals from contractor-operated federal prisons.” Asked about deaths at North Lake and the allegations that infectious people were put back into the general population, GEO Group and BOP each referred questions to the other.

Correction, June 22, 2020:
This article originally misstated the gender of the BOP spokesperson.