Trump lied that the U.S. Covid-19 mortality rate was the world’s best; his proof was a chart comparing the U.S. to just 6 countries in a different category. The whole pathology of Donald Trump’s presidency — his inability to accept facts that are not flattering to him, his resort to lying to cover up his mismanagement of the federal government, his staff’s desperate efforts to manufacture evidence to help him mislead the country and the conservative media’s role in enabling all of this — was on full display in just one 63-second exchange with the Fox News anchor Chris Wallace broadcast on Sunday.

Less than two minutes into the interview, Wallace confronted Trump with a damning statistic about his failure to contain the Covid-19 pandemic, relative to other nations. “We have the seventh-highest mortality rate in the world,” Wallace noted, accurately. “Our mortality rate is higher than Brazil, it’s higher than Russia and the European Union has us on a travel ban.”

Chris Wallace is getting praise for trying to fact-check Trump during an interview, but he let Trump blatantly lie about the U.S. mortality rate being the world's lowest while holding up a chart that showed the U.S. being 4th best of 7 countries *in a totally different category* pic.twitter.com/B58aLmawiP

As I explained last week, Trump has spent the past three months trying to disguise his failure to keep Americans from dying of Covid-19 by telling the same lie: that the per capita death toll in the United States, known as the mortality rate, is among the lowest in the world. As of Friday, the day Wallace sat down with Trump, there were indeed just six countries in the world with more than 100,000 citizens that had more per capita deaths than the U.S. according to the Johns Hopkins Coronavirus Resource Center. (Over the weekend, Chile moved up the rankings, so the U.S. currently has the eighth-highest mortality rate in the world, excluding the tiny states of San Marino and Andorra.) A table of the nations with the highest number of deaths per capita from Covid-19 on July 19.

Trump, however, refused to let Wallace’s completely accurate statement go unchallenged by alternative facts. “When you talk about mortality rates, I think it’s the opposite,” he said. “I think we have one of the lowest mortality rates in the world.”

When Wallace replied, “That’s not true, sir,” Trump demanded that his press secretary, Kayleigh McEnany, produce the misleading chart she has been using to try to prove, through sleight-of-hand, that the seventh-worst mortality rate in the world is really something to be proud of.

The president’s reference to an important metric, the percentage of his population that has been lost to the pandemic so far, as something he vaguely “heard” somewhere was not exactly reassuring.

At that point, McEnany stepped into frame and handed the president a chart. She was not wearing a microphone, but appeared to say: “This is the case fate– deaths in all these different eight countries, as Dr. Birx points out.”

The reference to Dr. Deborah Birx, the White House coronavirus response coordinator, suggested that the chart McEnany handed to Trump had come from his closest medical advisor on the pandemic. It was Birx who had first focused attention on the Covid-19 mortality rate in mid-April, when she stood next to Trump in the White House briefing room and presented a bar chart that showed that six European nations had higher per capita death rates from the disease than the U.S. at that point.

Trump glanced at the chart quickly, realized that it was upside down, and then displayed it for a fraction of a second before pronouncing, falsely, that it was proof that the U.S. had the “number one low mortality rate.” The chart, however, proved nothing of the kind.

That’s because it was not a measure of global mortality rates at all. It was, as the title visible in a freeze-frame showed, a chart looking at an entirely different metric: the “Case Fatality Rate of Covid-19.” President Donald Trump showed Fox News a chart comparing the case-fatality rate of Covid-19 in the U.S. to six other nations and lied about what it meant.

While the mortality rate is a straight-forward measure of how many citizens per capita have died from a disease, the case-fatality rate is something entirely different: the ratio between deaths from a disease and the total number of confirmed cases.

As the number of confirmed cases of Covid-19 in the U.S. has skyrocketed, the nation’s case-fatality rate has indeed gone down, to just 3.8 percent, but that number is still higher than in dozens of other countries. It is also essentially meaningless, since nations are testing at different rates and researchers warn that the case-fatality rate is unknowable until after a pandemic ends, when the full death toll is known. In the meantime, it is a misleading way of measuring the lethality of a disease unless an entire population has been tested for it.

In recent weeks, at least two Trump aides, McEnany and Alyssa Farah, the White House director of strategic communications, have claimed incorrectly that a chart showing the U.S. case-fatality rate declining means that “our mortality rate is going down.”

According to a version of the chart Trump held up that was displayed on-screen by Fox News later, the White House had created it using a tool on the University of Oxford’s Our World in Data website to compare the U.S. case-fatality rate to that of the global average and six other nations: Italy, Spain, Germany, Brazil, South Korea and Iceland. A note on the chart from the Oxford researchers warns against assigning too much importance to the metric. “During an outbreak of a pandemic,” the warning reads, “the CFR is a poor measure of the mortality risk of the disease.” 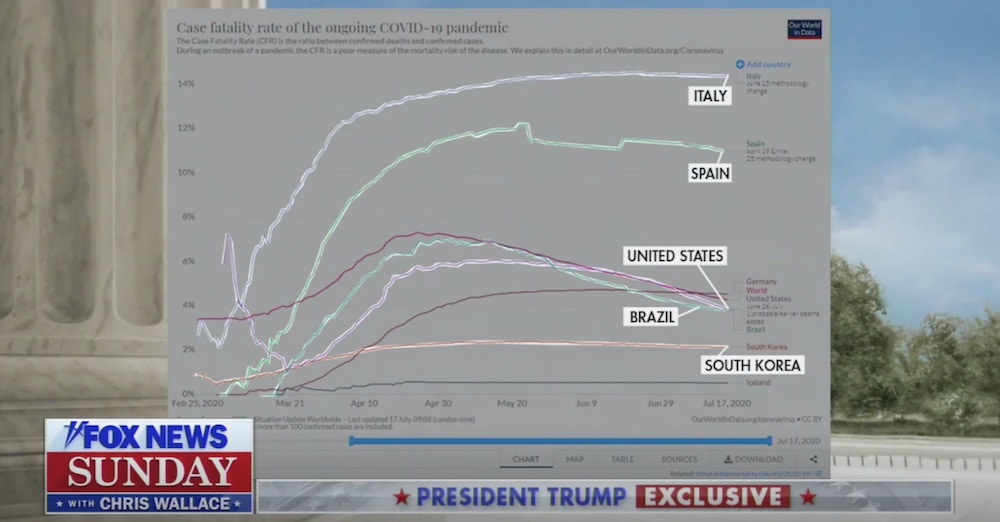 A chart used by the White House to justify the president’s claim that the U.S. mortality rate is low offers no information on that subject.

What the chart showed was that the U.S. ratio of deaths to cases on Friday was squarely in the middle of those selected countries: lower than Italy, Spain and Germany, but higher than Brazil, South Korea and Iceland. In other words, the chart Trump held up as proof that the U.S. had the lowest mortality rate in the world included no information about per capita mortality at all, and merely showed that the U.S. had a lower case-fatality rate than three randomly selected countries, and so was not “number one” in that category either.

As the U.S. exceeded 140,000 dead on Sunday, Germany, which has about one quarter the population of the U.S. has suffered 9,091 deaths. What this means is that more than 100,000 Americans who have died of Covid-19 this year would still be alive today had the federal government in Washington had been as successful as the one in Berlin.

While Trump misleads Americans about the U.S. mortality rate, just 359 new cases of Covid-19 are being diagnosed each day in Germany, and deaths there are down to an average of five a day. The U.S. by contrast is currently discovering an average of 63,281 new cases each day, and losing 756 lives.

While he was bluffing Wallace about what was the piece of paper he flashed for the camera, Trump pressed the Fox anchor to make sure he included it in his broadcast, “because it shows what fake news is all about.”

When Wallace replied that Fox would “put our stats on,” Trump erupted. “You said we had the worst mortality rate in the world and we have the best!” he complained.

When the interview was broadcast, Fox briefly cut away from the exchange at that point to fact-check the issue. Unfortunately, Wallace and his producers made a complete mess of that, by also confusing the Covid-19 mortality rate with the case-fatality rate. So, as the Fox anchor presented what he said was, “the mortality rate for 20 countries hit by the virus,” the image on-screen was a chart from the Johns Hopkins coronavirus website showing case-fatality rates instead. A screenshot from Fox News showing a chart of case-fatality rates for the 20 countries currently most affected by Covid-19.

That data showed, Wallace said, that “the U.S. ranked seventh — better than the United Kingdom, but worse than Brazil and Russia.” This statement, echoing what he had said at the start of his interview with Trump, suggests that the anchor, like the president, had gone into the taping with no idea that the per capita mortality rate and the case-fatality rate are completely different things.