The U.S.-Supported Coup in Bolivia Continues to Produce Repression and Tyranny, While Revealing How U.S. Media Propaganda Works

Bolivia is the latest in a long line of thriving democracies destroyed as U.S. institutions cheer and lend support.

Today’s SYSTEM UPDATE episode on this topic — with guests Kathryn Ledebur, director of the Andean Information Network, who has lived and worked with coca farmers in Bolivia for the last 30 years, and Mark Weisbrot, co-director of the Center for Economic & Policy Research — will debut at 2:00 p.m. on The Intercept’s YouTube channel. 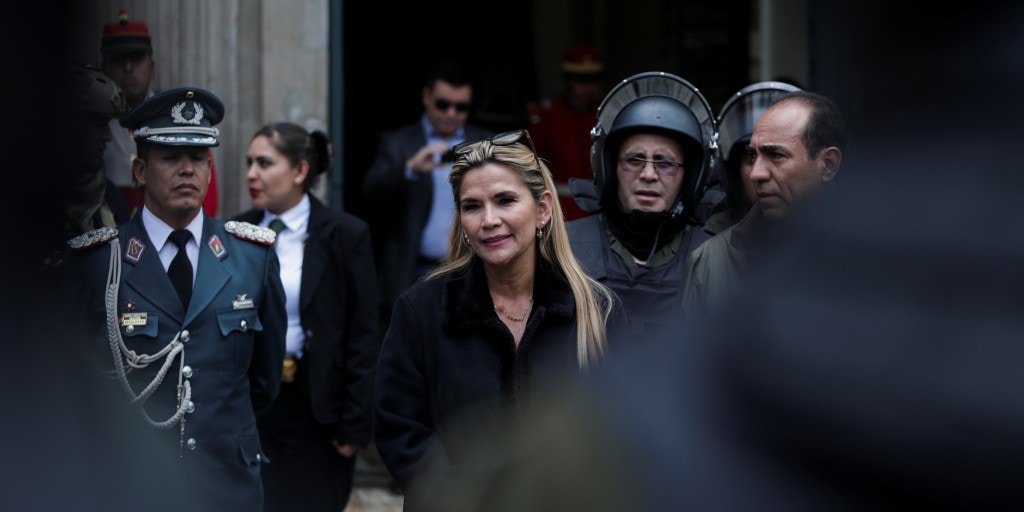 Bolivian Interim President Jeanine Áñez takes part in a ceremony with the police in front of the Presidential Palace in La Paz, Bolivia, on Nov. 13, 2019.

The U.S.-supported military coup in Bolivia has largely disappeared from western news outlets ever since the November 2019 massacres of pro-democracy protesters by the right-wing faction that seized power. But for Bolivians, the repression and tyranny that replaced their stable and thriving democracy endures. And, predictably, the “interim president” installed after the coup, Jeanine Áñez, continues to rule the country 10 months later, despite no possibility of being democratically elected, while she and her party plot how to prevent an election which all polls show will result in victory for the socialist party of toppled President Evo Morales.

What makes the coup in Bolivia and its aftermath so worthwhile to explore is not just the inherent importance of Bolivia itself: a country of 11 million people with a rich and unique ethnic, cultural and religious diversity, as well as an ample supply of the now-vital resource of lithium. It is also instructive because of how U.S. discourse evolved in support of the coup, with supposed “foreign policy experts” across the political spectrum — The Atlantic’s Yascha Mounk, Mother Jones’ Editor-in-Chief Clara Jeffery, former Obama official and Stanford Professor Michael McFaul, along with the Economist, the New York Times, and the Washington Post — spouting outright falsehoods to depict the destruction of Bolivian democracy as the salvation of it.

Since the coup last October, many of the key claims used to justify the ousting of Morales — most particularly claims by the Organization of American States that the election resulting in Morales’s victory was fraudulent — have been proven to have been lies. Yet not a single one of the foreign policy “experts” or media outlets have acknowledged their errors or even addressed these subsequent revelations, because they know that there are never any consequences for journalists and analysts as long as they remain subservient to the U.S. government agenda (while the New York Times reported on the studies proving the OAS claims to be baseless, they never acknowledged that their own reporting and editorializing treated those claims as true).

Bolivia is but the latest of a long line of thriving, stable democracies destroyed with the support if not the outright participation of the U.S. government, while jingoistic media figures disseminated the propaganda used to justify it all. And the suffering, violence, repression and tyranny left in its wake are then simply ignored by those who helped bring it about.

Today’s SYSTEM UPDATE, which debuts at 2:00 pm ET on The Intercept’s YouTube channel, explores all of these issues, provides an update on post-coup Bolivia, and dissects the key role played by propaganda from U.S. political and media venues. I’m joined by two of the most knowledgeable specialists on Bolivia: Kathryn Ledebur, director of the Andean Information Network, who has lived and worked with coca farmers in Bolivia for the last 30 years, and Mark Weisbrot, co-director of the Center for Economic & Policy Research, the first group to debunk the OAS claims of election fraud. For so many reasons, Bolivia matters, not just to people in the region but also in the U.S.

On System Update with @ggreenwald: an in-depth exploration of the 2019 coup that took place in Bolivia, its implications and international connections.