The incompetent criminals ruling the U.S. are about to push millions of Americans off a terrifying financial cliff. 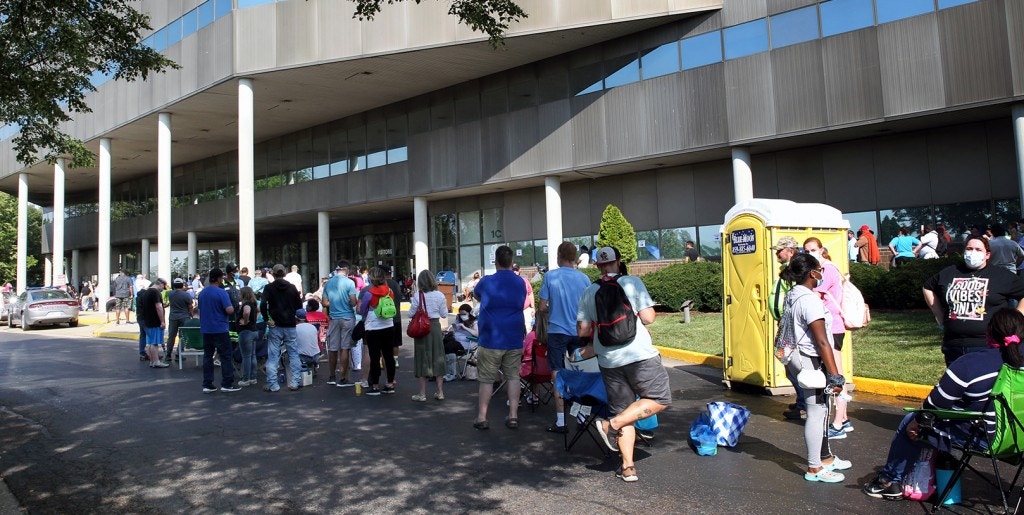 Hundreds of Kentucky residents wait in line outside the Kentucky Career Center for help with their unemployment claims on June 19, 2020, in Frankfort, Ky.

In some alternate reality, the government and corporate and union and religious leaders of the United States got together in February and told us: “The novel coronavirus is scary, and we’re all going to have to get creative and work together to crush it. Lots of jobs are going to momentarily vanish. But no one in this country will be scared of going hungry, because no one will. No one’s going to be scared of being thrown out of their home, because that’s not going to happen to anyone. This country has the power to take care of everyone’s basic material needs, and we will.”

Here in this reality, we’re governed by a blend of the criminally incompetent and incompetent criminals. As things stand today, they’re about to push a large fraction of Americans off a terrifying cliff. It’s so mercilessly cruel, economically destructive, and even contrary to their own self-interest, that if we’re going to stop them we probably need to figure out why.

Our rulers did demonstrate a spasm of rationality with the passage of the CARES Act in March. It was partly a cash-grab by big business but did get lots of people a $1,200 check and provided an extra $600 per week in federal unemployment benefits on top of state benefits.

Without these benefits, the 30 million people who lost their jobs in March and April would have already plummeted into the void. And because everyone’s spending is someone else’s income, as they fell they would have grabbed onto tens of millions more and taken them down as well.

And in fact, this downward spiral began to happen in mid-March. As the danger of Covid-19 became clear, consumer spending dropped by an astonishing 30 percent in a matter of days. But as soon as the government cash started flowing, spending began to recover, and it’s now more than 90 percent of normal. In poorer zip codes, it’s returned to almost 100 percent.

This has kept the lives of tens of millions of Americans merely bad, rather than totally impossible. But the supplemental unemployment benefits expire at the end of July. The GOP opening bid is to extend them but to cut the amount from $600 to $200. The reason, Treasury Secretary Steve Mnuchin explained in the Oval Office, is to prevent malingering: “We’re going to make sure that we don’t pay people more money to stay home than go to work.” In addition, Senate Majority Leader Mitch McConnell has said that the Republican “red line” in negotiations is making it essentially impossible for employees to sue employers on the grounds that their workplace is failing to protect them from Covid-19. Furthermore, under the proposed new rules, employers and even the Trump Justice Department would find it easy to countersue workers for bringing a coronavirus lawsuit.

Rationally, of course, this makes no sense. For most of the unemployed, there aren’t any jobs to go back to, and won’t be until the pandemic is under control. If their unemployment benefits are cut, people without jobs will desperately cut back on spending, leading to more unemployment, which will lead to less spending, and so on. The process will be accelerated as states and cities, which until now have attempted to avoid slashing payrolls in hopes that the federal government would rescue them, finally do so.

This may plausibly lead to basic material deprivation — true hunger and homelessness — on a scale few alive today have ever seen. According to the Census Bureau, the number of America’s 249 million households reporting that they sometimes or often do not have enough to eat has already jumped from 22.5 million earlier this year to 29.3 million in July. With Republicans opposing an expansion of food stamp funding, as well as the renewal of the CARES Act supplemental food program for children, that is likely just the beginning.

Then there’s housing. The CARES Act contained a federal ban on evictions that covered about 30 percent of U.S. rental units. That ban just ended, as have most state-level bans. Forty million people could potentially lose their homes in the next several months. In states like Florida, Texas, and New York, half of the tenants will shortly be unable to make the rent.

This is a gigantic human emergency. Almost every person in the country is viscerally frightened for themselves or their family and friends.

But beyond an emergency, it’s also politically inexplicable. Donald Trump and Republicans in general are presumably aware that there’s an election this November, and that they’ll do better if Americans aren’t dying in the street. Just their crass self-interest should lead them to throw as much money at everyone as fast as possible.

But they’re not doing so. Why not? It’s easy to believe it’s because they’re mustache-twirling villains who consciously enjoy the suffering they’re inflicting upon us. But the reality is different, and in some ways scarier.

The weird fact is that even the worst people in history never ask themselves, “Are we the baddies?” On the contrary, they’re convinced they’re great heroes marching us all to a glorious future. When interrogated by the FBI, Saddam Hussein sincerely referred to himself as “a humanitarian.”

Leaders like this are able to ignore the consequences of their actions because, to a shocking degree, they honestly are not aware of the consequences. In the past, this state of malignant ignorance was much harder to maintain. There were local newspapers that could shove the facts in front of them. There were unions that they had to pay attention to, and respected liberal archbishops who attempted to speak for the voiceless.

All that’s gone now. Today conservative U.S. elites live their mental lives protected by an almost impenetrable carapace of wealth and power. None of the people they meet at fundraisers are about to be thrown into the street, so therefore no one is. There are no stories on Fox News about children experiencing brain damage from malnutrition, thus such children don’t exist.