The leadership of the University of Massachusetts Amherst College Democrats began discussing an operation they believed could sink the campaign of Alex Morse for Congress as far back as last October, a plan they then helped engineer and which came to fruition on Friday, after the College Democrats sent a letter regarding Morse to the Daily Collegian, the school’s student newspaper.

The letter, sent three weeks before his primary challenge to Rep. Richard Neal, informed Morse that he was no longer welcome at College Democratic events, alleging he used such opportunities to socialize with students and later connect with them on social media in ways that made them feel uncomfortable. Message logs obtained by the Intercept — both from leaders of the College Democrats UMass Amherst chapter group as well as chats one of them had with Morse — shed new light on how this purported scandal was deployed. As a condition of obtaining the logs, The Intercept agreed to publish some of the chats and paraphrase others.

On Wednesday, following a statement by Morse, the statewide College Democrats chapter clarified that he had in fact only attended a single event during the course of his campaign. It was after that event in October 2019 that the leadership of the UMass Amherst chapter began to talk about leaking a story damaging to Morse, according to those online communications.

Timothy Ennis, the chief strategist for the UMass Amherst College Democrats, admitted in the chats that he was a “Neal Stan” and said he felt conflicted about involving the chapter of the College Democrats in a future attack on Morse. “But I need a job,” concluded Ennis. “Neal will give me an internship.” At the time, Ennis was president of the chapter, a post he held from April 2019 to April 2020, when he was term-limited out.

Leaders of the College Democrats group went beyond merely plans to leak. They also explicitly discussed how they could find Morse’s dating profiles and then lead him into saying something incriminating that would then damage his campaign.

That effort appears to have failed to generate the material they hoped for, but the group’s leaders did believe they held damning evidence they contemplated leaking: Instagram messages between Morse and Andrew Abramson, who in April became president of the organization. Ultimately, the College Democrats did not release any chats or any other specific claims against Morse, opting instead to level broader charges that he behaved inappropriately. Morse, who was an adjunct professor at UMass Amherst until the fall of 2019, has acknowledged having consensual relationships with students but has said that he has never had an inappropriate relationship with a student of his, and no such allegations have been made.

On October 5, Morse attended a College Democrats event at a local community college. Neal also appeared, and was introduced by Ennis, who was at the time enrolled in a journalism class Neal taught at UMass Amherst. Neal later told Ennis he was impressed by the event, Ennis claimed in the chats. Morse sat on a panel with Abramson. After the event, Morse reached out to Abramson on Instagram to say it was a pleasure meeting. (The two had previously matched on Tinder, Ennis said in the chats, but had never met up. To match on Tinder means both parties must swipe in the same direction in order to begin a conversation.) 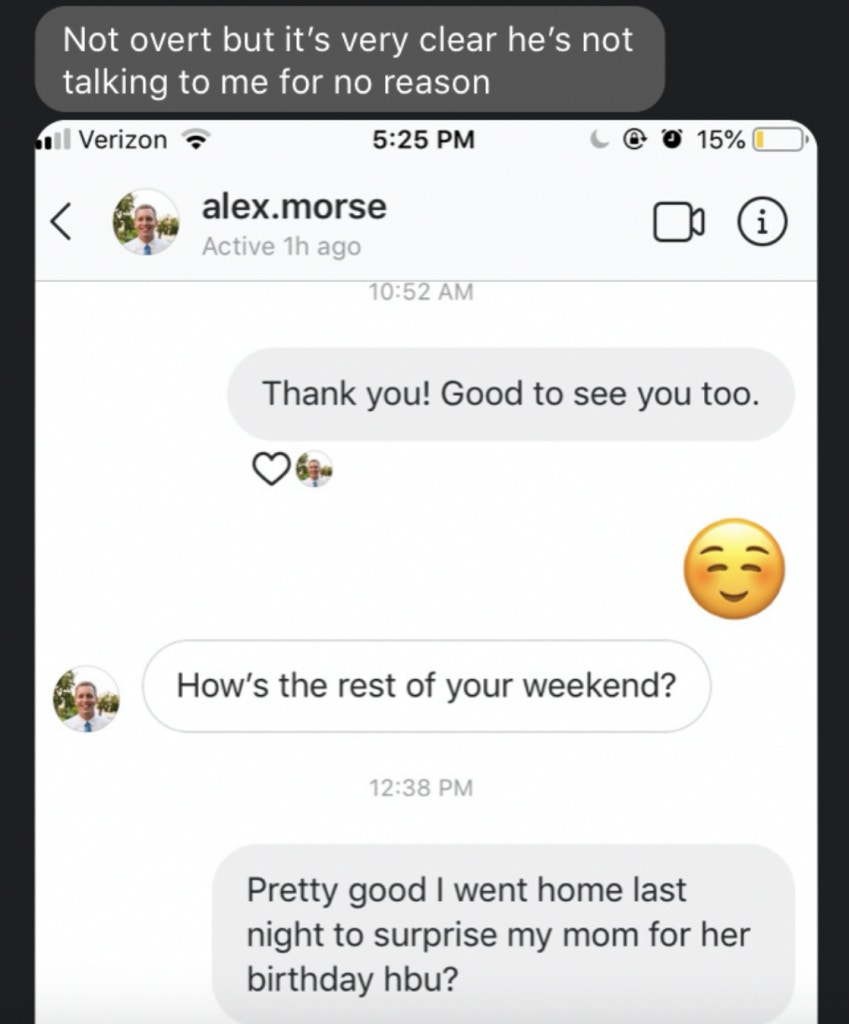 “Thank you! Good to see you too,” Abramson said.

“How’s the rest of your weekend?” asked Morse.

“Aw that’s nice. How was that? I had an event to go to last night to speak, then had a wine tasting at a friends house. Now I’m in North Adams to march in a parade,” Morse replied.

Abramson shared a screenshot of the exchange with friends. “Not overt but it’s very clear he’s not talking to me for no reason,” he said. “Like read that message. Also don’t mind me totally leading him on.” He added that he accepted the message request “because why not.”

“This will sink his campaign,” Ennis said, calling it part of a pattern of Morse dating students. That conversation with Abramson appears to be connected to the charge that underlies the College Democrats’ statement against Morse, when they said that Morse “sought out students that he met at our events privately on social media, in a manner widely understood by our generation to indicate intimacy.”

After Ennis concluded the chats with Abramson would sink Morse’s campaign, the conversation between Morse and Abramson continued for another several weeks.

During that same time period, Ennis was a student in Neal’s “The Politician and The Journalist” class at UMass Amherst, and had been open with other members of the College Democrats about hoping to land a job with Neal, The Intercept reported Tuesday. Ennis, in the chats, quipped that perhaps he should leak the information by including it in a paper for Neal’s class.

Also last fall, Ennis was driving through New Hampshire with Clare Sheedy, a fellow College Democrat, as both were campaigning for Pete Buttigieg. “He spoke very highly of Mr. Neal,” Sheedy told The Intercept. “What he said to me was he wanted Neal to be his ‘in’ to politics and work his way up from there.”

Sheedy asked what he thought of Morse, and Ennis told him he is known for dating students and had recently matched on a dating app, Tinder, with a fellow College Democrat, and chatted with him via Instagram.

In a statement to MassLive on Monday, Neal spokesperson Kate Norton denied any collaboration between the Neal campaign and the student group, adding that the Neal campaign “commends these courageous students.” The College Democrats also responded to allegations of cooperation with the Neal campaign on Sunday, writing on Twitter, “To suggest that our decision to send the letter to Mayor Morse was a quid pro quo with Rep. Neal, his campaign, or anyone else is untrue, disingenuous, and harmful.”

Asked about Ennis and Abramson, Norton reiterated her earlier statement, but added: “The young men you are asking about have no involvement with the Neal campaign.”

In the chats, Ennis also floated the possibility of leaking allegations against Morse to Politico, and, indeed, in June, the College Democrats did so, pitching the story to Alex Thompson, a political reporter at the outlet. Thompson reached out to the Morse campaign as part of his reporting, though ultimately did not run the story until months later, after the college paper ran it. 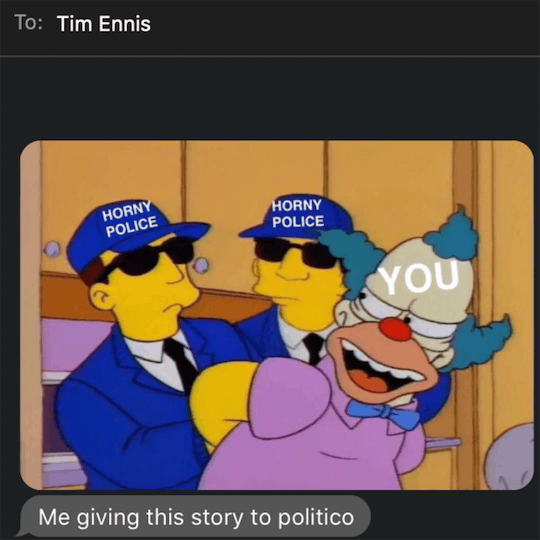 After receiving the inquiry, Morse said he reached back out to Abramson — the only student Morse had communicated with after a College Democrats event during his campaign. Morse said he apologized if his outreach had made the chapter president uncomfortable, and Abramson blocked him.

Ennis said in the chats that he had learned from people who had graduated previously that Morse was on Tinder, sharing a screenshot of a profile from the year before. The profile is standard, dating-app fare, and does not include Morse’s title as mayor of the nearby town of Holyoke, a position he’s had since he was 22, nor does it mention his time as an adjunct at UMass, which ended last fall. Ennis said in the chats that Morse had never matched with him or messaged him, but discussed an effort to find him and match.

In a statement that followed its initial letter, the College Democrats wrote, “The letter was written at the direct request of those affected by Mayor Morse’s behavior, and those individuals were involved in the writing process. The stories included in our letter are their stories. They have not spoken out individually about their personal experiences because they wish to remain anonymous.”

The implication that the letter was the collective work of the members of the chapter is false, however. It was written by leadership without input from the members, according to messages provided to The Intercept from the organization’s GroupMe chat. The day after the Daily Collegian published the letter, a member of leadership sent the following message: “Hello everyone. I’m sure some of you saw the article about Alex Morse and letter udems and other orgs sent to his campaign. I’m sure many of you are confused and even disappointed. If anybody needs support or wants to talk about it the udems eboard is here for you.”

A follow-up post included a link to the story. Five days later, specific allegations have yet to surface.

Abramson declined to comment, and neither Ennis nor the College Democrats responded to requests for comment. Daniel Marans of HuffPost contacted the College Democrats for further comment on Wednesday to ask whether or not their letter was motivated by Ennis’s or anyone else’s political ambitions, posting their response on Twitter.

The student group denied Ennis’s professional ambitions played a role in the crafting of the strategy. Marans also asked if Morse had indeed declined a request to fund the organization, as the mayor had told The Intercept on Tuesday. The organization offered HuffPost a selectively edited email regarding a donation from the Morse campaign, quoting the campaign as saying it would “get back to us shortly.” A copy of the full email was provided to The Intercept. It reads: “Hi Hayley — will get back to you shortly on sponsorship. We’ve been committing a great deal to COVID related organizations and want to make sure we honor those activities first. Sorry for delay.”