Kids May Be Using Laptops Made With Forced Labor This Fall

The Lenovo computers were manufactured under a Chinese government program to provide cheap labor from persecuted Uyghurs. 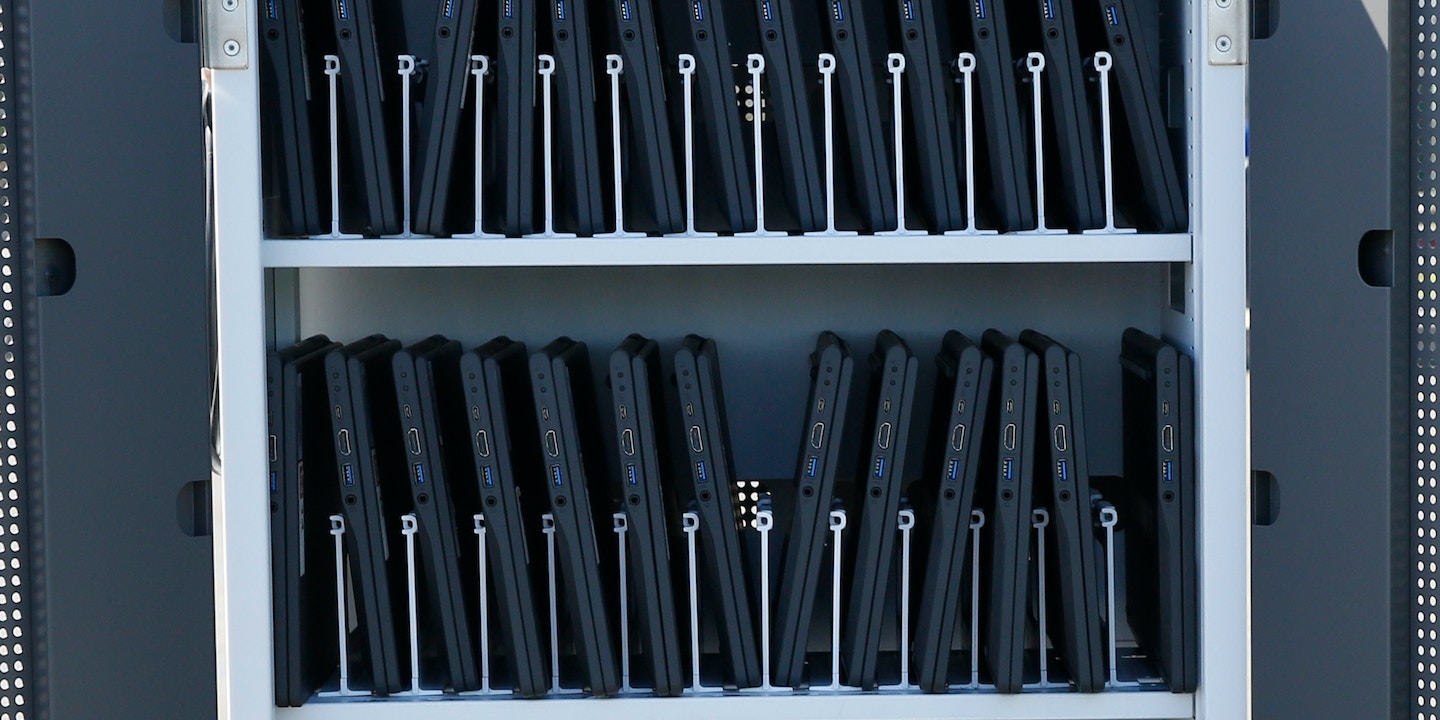 The ongoing persecution by the Chinese government of Uyghur Muslims is far from a distant problem. Recent reporting has identified Uyghur forced labor in the supply chain of major global brands, including BMW, Ralph Lauren, Samsung, and Sony.

Now, as school districts scramble to obtain electronic devices for a school year that may be primarily virtual, some children may end up using computers assembled by Uyghurs working in inhumane conditions. Shipping records show that since the start of the pandemic, Lenovo has imported an estimated 258,000 laptops from a Chinese manufacturer that has participated in a troubling labor scheme and been singled out by the U.S. government for violating human rights. The revelations serve as a reminder of how much of the supply chain is tied to forced labor and how many products that will aid us through the Covid-19 pandemic may be manufactured under duress.

The Lenovo computers were made by the manufacturer Hefei Bitland, which participates in a Chinese government program to provide factories with cheap labor from persecuted Uyghurs. Some of the computers included lightweight Chromebooks bound for public schools in the U.S. — and some were delivered even after the company was placed on a government list restricting trade. After they arrived at port, sources say, Lenovo apparently removed a portion of the computers from distribution; over the past few weeks, multiple school districts have reported holdups in their orders of Lenovo Chromebooks. But other computers shipped since the start of the pandemic made it through to American customers, according to a distributor and to labor advocates who analyzed shipping data for The Intercept. Lenovo did not respond to request for comment.

“Whatever happens with the recently arrived shipments, hundreds of thousands of notebooks made for Lenovo by Hefei Bitland, and produced while transported Uyghur labor was present at its production facility, have already been bought by individuals and institutions in the U.S.,” said Scott Nova, executive director of the Worker Rights Consortium, based on a review of the Import Genius shipping records.

Evidence of Hefei Bitland using forced labor first appeared in an August 2018 article in Xinjiang Daily, a state newspaper. The article explains that the plant uses Uyghur workers who are overseen by Communist Party minders and police. The Australian Strategic Policy Institute, or ASPI, a think tank in Canberra, included Hefei Bitland in a report on Uyghur forced labor published in March, as the novel coronavirus was spreading through the world. The U.S. Tariff Act prohibits companies from importing goods manufactured using forced labor, which is defined by the International Labor Organization as involving several possible indicators including intimidation, restricted movement, and abuse of a vulnerable population.

In the months that followed the ASPI report, schools and companies around the United States moved online and competed to cheaply purchase devices. Since March, Lenovo has imported nearly 1.3 million pounds of computers made by Hefei Bitland. If every boxed computer weighs 5 pounds, that would be the equivalent of 258,000 laptops.

On July 20, the U.S. Commerce Department’s Bureau of Industry and Security added Hefei Bitland and eight other Chinese companies to the Entity List for using forced labor performed by Uyghurs and other oppressed Muslim minority groups. (BIS also listed two subsidiaries of the gene sequencing powerhouse BGI, for the repressive use of genetic technologies in the traditional Uyghur home region of Xinjiang.)

Lenovo’s shipments continued even after Hefei Bitland’s July Entity List addition, which threw the weight of the U.S. government behind allegations of forced labor and rattled U.S. supply chains. Following the designation, other U.S. firms that rely on Chinese contractors accused of employing forced Uyghur labor said they intend to change suppliers. Lenovo has not made a public statement about the forced labor finding. A cached version of the website for Hefei Bitland’s Shenzhen-based parent company, Bitland, says that its other clients include Google and Intel. The list of customers has since been removed.

Customs records show that at least 16 separate shipments containing 355,982 pounds of Hefei Bitland-manufactured Lenovo laptops arrived in the Port of Los Angeles since the Entity List designation. The records, obtained via sea vessel cargo disclosures, were compiled by Import Genius, a technology company that tracks trade-related data. There are gaps in the disclosure system, however, potentially concealing other deliveries. Air freight cargo does not follow the same disclosure laws as shipments sent by sea.

At least some of those shipments are now in limbo. Multiple deliveries of Hefei Bitland laptops have been delayed, affecting school districts around the country. Nearly 4,000 laptops destined for Etowah County, Alabama, schools were held up earlier this month. The Etowah County school district, which ordered the laptops in June from Trinity3 Technology, a Lenovo distributor, canceled the order earlier this month when it became clear the delivery would not be resolved until October.

Similar delays over Hefei Bitland-made laptops were reported for schools in New Jersey and North Carolina. School district officials in Paterson, New Jersey, told the Paterson Times that the holdup was due to Lenovo trying to bring three additional factories online to produce Chromebooks, in order to replace laptops made by Hefei Bitland.

Trinity3 did not respond to repeated requests from The Intercept for comment. Scott Gill, the chief executive of Trinity3, told the News & Observer that Lenovo was in the process of “socially responsible sourcing and ongoing auditing processes for all production facilities to safeguard against the use of forced labor.” But some laptops Hefei Bitland shipped this summer have been distributed to school districts. Gill said that the company first learned of delays on July 27, and that before then, other shipments of Hefei Bitland laptops had made it to school districts across the country. One district in North Carolina recently received 7,650 Chromebooks from Trinity3, according to the paper.

Hefei Bitland’s campus spans 60 acres in an industrial quarter of Hefei, the capital of Anhui province in eastern China. The company makes laptops, graphics cards, and PC motherboards. Bitland, its parent company, says on its website that in 2019 Lenovo, which is headquartered in Hong Kong, awarded it the label “Diamond supplier.”

Two thousand miles away, in Xinjiang, the Chinese government interns as many as 1.5 million Uyghurs, Kazakhs, and other ethnic minorities in inhumane detention camps. In the internment camps, detainees are separated from their children, prevented from exercising their religion, and subjected to political indoctrination. Uyghurs have also been forcibly sterilized or made to use intrusive birth control methods — a treatment that some are now calling genocide.

Over the past few years, the internment camps have been joined by an institutionalized forced labor program in which workers are transferred from Xinjiang — in some cases directly from the camps — to factories in the east. Under a scheme called Xinjiang Aid, the Chinese government has placed an estimated 80,000 Uyghurs at factories, where they live in segregated dormitories, sometimes surrounded by brick walls, tall fences, or guard stations. Among the beneficiaries of this program is Hefei Bitland.

The Chinese government says that Xinjiang Aid is voluntary. But rights advocates say that the program is a barbaric way of lowering labor costs while stamping out the Uyghur culture and language. “Why would they transfer the workers across the country?” said Peter Irwin, a senior program officer at the Uyghur Human Rights Project in Washington, D.C. “Part of it is cheap labor. Secondly it serves the purpose of assimilating people.”

In 2018, party cadres reportedly transferred 1,554 workers from rural Awat County in Xinjiang to Hefei Bitland’s facility, along with two factories owned by other manufacturers. Although it is not clear whether Hefei Bitland is currently employing Uyghurs, the labor arrangements are typically ongoing, with workers cycled out every six to 12 months and replaced with new transplants. According to ASPI, the Australian think tank, both local officials in Xinjiang and factories in eastern China get kickbacks for arranging placements.

Uyghur laborers are often paid, but they are believed to receive less than their Han Chinese counterparts. After finishing their shifts, the workers are often forced to study Mandarin. They are closely watched by minders and in some cases may be required to download an app on their phone that rights advocates believe is used for surveillance.

“Once they get to the factories, they generally have very strict restrictions on their movements,” said Nathan Ruser, a researcher with ASPI’s International Cyber Policy Centre. “Sometimes they’re allowed permission to leave, but generally not — and never without permission.” Satellite photos of the Hefei Bitland campus reveal a structure that appears to be a guard station was constructed next to worker dormitories in the second half of 2018. Bitland, Hefei Bitland’s parent company, did not respond to a request for comment. A satellite image of Hefei Bitland’s campus shows an apparent guard station, adjacent to worker dormitories, that was constructed in late 2018.

“Robust and publicly available trade data is key to enabling oversight for supply chains, ensuring that companies purchasing goods produced through forced labor, as well as the manufacturers, can be held to account,” said William George, an analyst with Import Genius. “Without transparency in global trade, manufacturers who violate human rights can operate with near anonymity.”

Laptops are hardly the only product to come under scrutiny since the start of the pandemic. The New York Times recently reported that some face masks and other protective equipment sold in the United States are manufactured using forced Uyghur labor. In June, brands including Gap, H&M, Victoria’s Secret, and Zara came under pressure to clean up their supply chains from a campaign called End Uyghur Forced Labor, which highlights abuses in apparel production. BIS issued the Entity List designations the following month. A bill introduced in Congress in March would ban certain imports from Xinjiang and require more disclosures from companies that work in the region.

But many companies have been slow to purge their supply chains of forced labor. If Lenovo doesn’t commit to forgoing sales of computers made by Hefei Bitland, said Nova, “then it is likely that some institutional and individual consumers will end up buying notebook computers, in the weeks ahead, made by a supplier that has been identified as a major human rights violator.”

Rights advocates called on governments in the United States and Europe to better enforce prohibitions on forced labor. “It’s up to governments to ensure that these kinds of products aren’t landing in the laps of schoolchildren,” Irwin said.