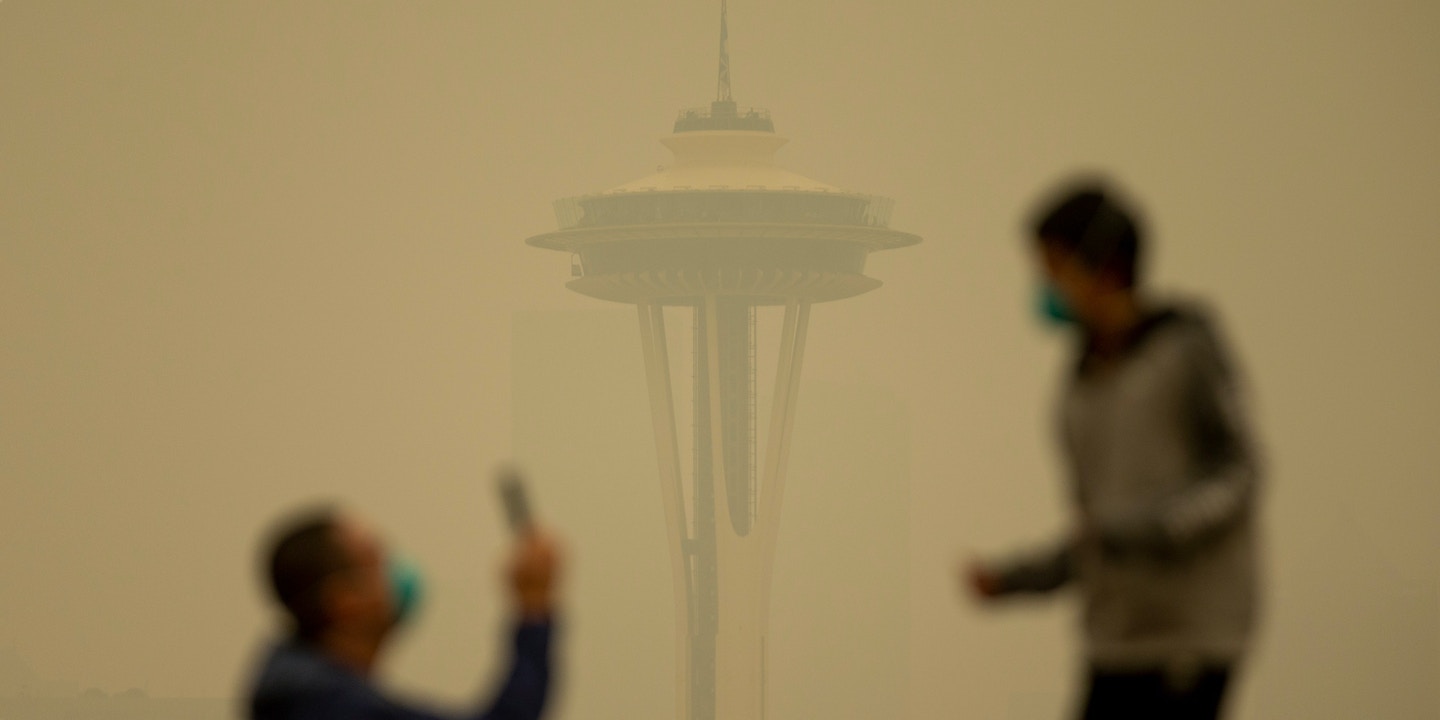 Against a backdrop of fires that have burned over 600,000 acres in Washington state, the climate crisis is becoming an important issue in the congressional race between two Democrats in the state’s 10th Congressional District, which includes Olympia and the surrounding area.

State Rep. Beth Doglio, a supporter of the Green New Deal, is facing off against former Tacoma Mayor Marilyn Strickland. The race pits an environmental activist who successfully fended off fossil fuel projects in Washington against a mayor who stood by as fossil fuel infrastructure developed in her city without necessary permits. Which one will go to Congress will say much about what kind of Democratic Party will be tackling climate change in the years ahead.

Which one will go to Congress will say much about what kind of Democratic Party will be tackling climate change in the years ahead.

In Strickland’s two terms as mayor of Tacoma, from January 2010 to January 2018, she frequently clashed with climate activists by supporting expanded fossil fuel infrastructure at the Port of Tacoma. The port is not directly under the City of Tacoma’s control, though the city does have to permit construction projects inside the port. The conflicts centered on two issues: the proposed construction of a methanol plant in 2016 and a liquid natural gas, or LNG, facility that Strickland initially invited to Tacoma in 2013 with hopes that it would reduce air pollution, but became controversial due to the plant’s infringement on tribal lands. In response to a detailed set of questions from The Intercept, Strickland declined to weigh in on her record at the port, and her campaign would not make her available for an interview.

Prior to her tenure in the statehouse, Doglio had worked to stop fossil fuel infrastructure, having been a co-chair of Power Past Coal, a coalition that led successful campaigns in 2015 and 2016 to stop the construction of seven coal export terminals in the state. Doglio and the Power Past Coal coalition organized with the state’s Lummi tribe in opposition to what was meant to be the nation’s largest export terminal, arguing that it would infringe on the federal government’s treaty obligations to the tribe. In 2016 the Army Corps of Engineers denied permits for the project, citing the treaty rights. “We’re totally at a crossroad and the Northwest stood up and said we’re not going to allow this to happen in our own backyard,” Doglio said at the time.

In the summer of 2017, toward the end of Strickland’s mayoralty, the Puyallup Tribe began arguing that the new facility infringed on their tribal lands and fishing treaty rights. Because of that, combined with new data on the effects of methane as a greenhouse gas, the plant should have been a non-starter for the city, said Eric de Place of the Sightline Institute, an environmental watchdog group based in Seattle. (Leaks in natural gas extraction and production are a significant contributor to methane emissions, which can be 84 times more potent as a greenhouse gas than carbon dioxide.) Constructing the LNG facility would require ”infringement on tribal rights, we now know a lot more about the climate impact of methane, and it also became clearer that we have a giant climate crisis and we have to stop new fossil fuel infrastructure,” said de Place.

As the LNG facility moved forward, the City of Tacoma, under Strickland’s leadership, issued an environmental review that contained a major error, the Sightline Institute found. Namely, it significantly understated the amount of marine traffic that the new facility would generate. Puget Sound Energy, one of the state’s utility companies, began building the facility without the necessary permits, and the city never pushed back, eventually retroactively granting the permits. Puget Sound Energy is owned by a confederation of Canadian and Dutch pension funds.

“The blame for all of this falls on the city of Tacoma,” said de Place. “They did a very poor job of conducting the review. That should never happen again. The facility is completely built.”

While her administration was conducting the environmental review for the proposed methanol plant in 2016, Strickland appeared in a promotional video for the Chinese government-backed project, despite her public claims of neutrality. The plant would have been the largest methanol plant in the world, an export facility that would have been used as an integral component in Chinese plastics production. In addition to the plastics, environmentalists were concerned about the plant’s huge water and electricity consumption, as well as methanol’s status as a toxic substance. While the project was under consideration, Strickland orchestrated an elaborate PR opportunity for Chinese President Xi Jinping at a Tacoma school. The China-backed company, Northwest Innovation Works, backed out of the plan in April 2016. The company is now seeking to build the plant in the town of Kalama, Washington, which is about 40 miles outside of Portland, Oregon.

Local activists said the two projects led to little love lost between Strickland and the city’s environmental movement. “She had more police presence in the city hall during the citizens forums than any other mayor I knew of,” said Barbara Church, a Tacoma activist. “Just because she had so many people protesting the projects she supported or brought in like LNG, or the methanol,” Church said. “Her history has shown that she would be the exact opposite by supporting the methanol and LNG facilities.” Beth Doglio, campaign director for the Climate Solutions’ organization, holds one of several boxes containing over 40,000 signatures in opposition to proposed coal export terminals in Olympia, Wash., on Feb. 29, 2012.

Doglio has been endorsed by the League of Conservation Voters, the Sierra Club, and the Sunrise Movement, while the endorsement list on Strickland’s website does not include any environmental groups. The groups backing Doglio point to her record in the state House, where she passed a green construction bill mandating efficiency benchmarks for large commercial buildings, legislation to eliminate fossil fuels from utilities by 2035, legislation to eliminate food waste, and legislation to allow localities to more easily raise funds for mass transit. Doglio also passed a complete overhaul of regulation of toxic substances after a bruising battle with the chemical industry, a win that has acquired new relevance as toxins in home construction are now being sent directly into the atmosphere due to the fires.

Sunrise, the youth-led climate movement, anticipates making at least 75,000 calls to voters in the district on behalf of Doglio. “We have the opportunity to elect someone who will prioritize community well-being over profiting from fossil fuel executives who want to drill in the district,” said Michele Weindling, electoral campaigns coordinator with Sunrise, in a statement to The Intercept. “Right now, the entire west is burning, the climate crisis is here, and we must elect the candidates who have a bold plan to battle it at the scale it requires. Beth is that candidate.”

Strickland, meanwhile, supports reentering the Paris climate agreement, and said in a statement to The Intercept that she “supports impactful plans to address climate change that are attainable and effective to reduce carbon emissions, while creating and maintaining family-wage jobs, and ensuring a just and equitable transition to clean energy source.” She added that she supports the recommendations of the House Select Committee on the Climate Crisis, which are less ambitious than those outlined in Green New Deal proposals. The GND sets a deadline of 2030 for achieving net zero emissions, while the Select Committee’s timeline extends to 2050. Additionally, unlike the Green New Deal, the Select Committee’s proposal does not set a goal of halting fossil fuel extraction, to the ire of some environmentalists.

Doglio, on the other hand, is much more aggressive. “It’s really clear right now that we have to do everything we can to turn the tide on fossil fuel production,” Doglio said in an interview with The Intercept. “The Green New Deal is an incredible vision where we don’t just significantly reduce fossil fuels over time. It also has intersectional smarts — on poverty, racial justice and union jobs. The Green New Deal moves climate policy forward so it centers people, and racial justice specifically.”

Sunrise’s Weindling argued that the Green New Deal is integral to any solution to the climate crisis currently engulfing the West. “These fires are proof that the climate crisis is here, and that we as a country are not prepared for how devastating it will be.”

The race in the crowded primary was to replace four-term Rep. Denny Heck, who decided to run for lieutenant governor. Strickland has the backing of former Democratic Govs. Christine Gregoire and Gary Locke — the latter of whom was also secretary of commerce and the ambassador to China in the Obama administration — among many other members of the Washington Democratic political establishment, including centrist U.S. representatives Derek Kilmer, Suzan DelBene, Rick Larsen, and House Majority Whip Jim Clyburn. In addition to environmental groups, Doglio also has the endorsement of the Washington State Labor Council federation of unions. Washington has all-party political primaries, à la California and Louisiana, which led to the Democrat-on-Democrat race. Doglio and Strickland had raised a roughly equal amount of money — just over $600,000 — as of the June 30 FEC deadline.