This week’s SYSTEM UPDATE on this topic — with Dr. Crystal Heath, one of the veterinarians targeted by these industry campaigns for retaliation — can be viewed on The Intercept’s YouTube channel, or on the player below.

Animal agriculture industry groups defending factory farms engage in campaigns of surveillance, reputation destruction, and other forms of retaliation against industry critics and animal rights activists, documents obtained through a FOIA request from the U.S. Department of Agriculture reveal. That the USDA possesses these emails and other documents demonstrates the federal government’s knowledge of, if not participation in, these industry campaigns.

These documents detail ongoing monitoring of the social media of news outlets, including The Intercept, which report critically on factory farms. They reveal private surveillance activities aimed at animal rights groups and their members. They include discussions of how to create a climate of intimidation for activists who work against industry abuses, including by photographing the activists and publishing the photos online. And they describe a coordinated ostracization campaign that specifically targets veterinarians who criticize industry practices, out of concern that veterinarians are uniquely well-positioned to persuasively and powerfully denounce industry abuses.

One of the industry groups central to these activities is the Animal Agriculture Alliance, which represents factory farms and other animal agriculture companies — or, as they playfully put it, they work for corporations “involved in getting food from the farm to our forks!” The group boasts that one of its prime functions is “Monitoring Activism,” by which they mean: “We identify emerging threats and provide insightful resources on animal rights and other activist groups by attending their events, monitoring traditional and social media and engaging our national network.” Indeed, the Alliance frequently monitors and infiltrates conferences of industry critics and activists, then provides reports to their corporate members on what was discussed. As The Intercept previously noted when reporting on felony charges brought against animal rights activists with Direct Action Everywhere, or DxE, for peaceful filming and symbolic animal rescues inside one Utah farm that supplies Whole Foods and another owned by Smithfield — an action that showed how wildly at odds with reality is the bucolic branding of those farms — the Animal Agriculture Alliance issued a statement denouncing the activists for (ironically) harming their animals and urging law enforcement and “policymakers” to intervene on behalf of the industry against the activists.

In the emails obtained by the FOIA request, the Alliance and its allies frequently encourage their members to alert the FBI and Department of Homeland Security regarding actions by activists. In response to a project by DxE to create a map tracking factory farms, Lyle Orwig — chair of the agricultural company Charleston/Orwig, Inc. and a member of the Alliance board — proposed the retaliatory step of “taking photos of every DXE [sic] member” and posting them to the internet while accusing them of being “opposed to feeding the hungry.” One person singled out for retaliation in these discussions was a popular, respected Bay Area veterinarian, Dr. Crystal Heath. As a local CBS affiliate television profile of her explained, Dr. Heath is the kind of veterinarian who we all as children are taught to admire.

Rather than working for corporations or state agencies engaged in cruel animal experimentation, or for factory farms making a large salary to provide the veneer of medical justification for their barbaric, torturous practices, Dr. Heath has devoted herself to shelter medicine, working for years with the Berkeley Humane Society and other nonprofit animal rescue groups, where she “has spayed and neutered more than 20,000 animals.” The CBS broadcast report provides a full picture of the humanitarian and self-sacrificing nature of her work.

But to the Animal Agriculture Alliance and its industry allies, Dr. Heath somehow became a grave danger, an “extremist” whose name needed to be circulated within her profession as someone to be aggressively shunned. And that is exactly what they did. What prompted this targeted campaign against her was nothing more than her use of her veterinarian expertise to express criticisms of industry abuses and excesses.

In May, The Intercept reported on a gruesome mass-extermination technique being used by Iowa’s largest pork producer, Iowa Select Farms, to kill large numbers of pigs which were deemed unnecessary and in need of “depopulation” due to the pandemic. The technique, called “ventilation shutdown,” or VSD, involves cutting off the air supply in barns and turning up the heat to intense levels so that “most pigs — though not all — die after hours of suffering from a combination of being suffocated and roasted to death.” The pigs who survive this excruciating ordeal are then shot in the head in the morning by farm employees. A video report produced by The Intercept and the video documentarian Leighton Woodhouse — based on footage obtained inside an Iowa Select barn by DxE as the pigs were slowly dying — was viewed by more than 150,000 people.

Numerous veterinarians were shocked by the use of this unspeakably cruel and gratuitous mass-extermination tactic, which imposes extreme, protracted suffering on highly intelligent, socially complex, sentient animals. And it created serious problems for the industry, with McDonald’s demanding an explanation it could use publicly, and even discussions — from the National Pork Producers Council — to invent a new, more pleasant and euphemistic name for the extermination technique: 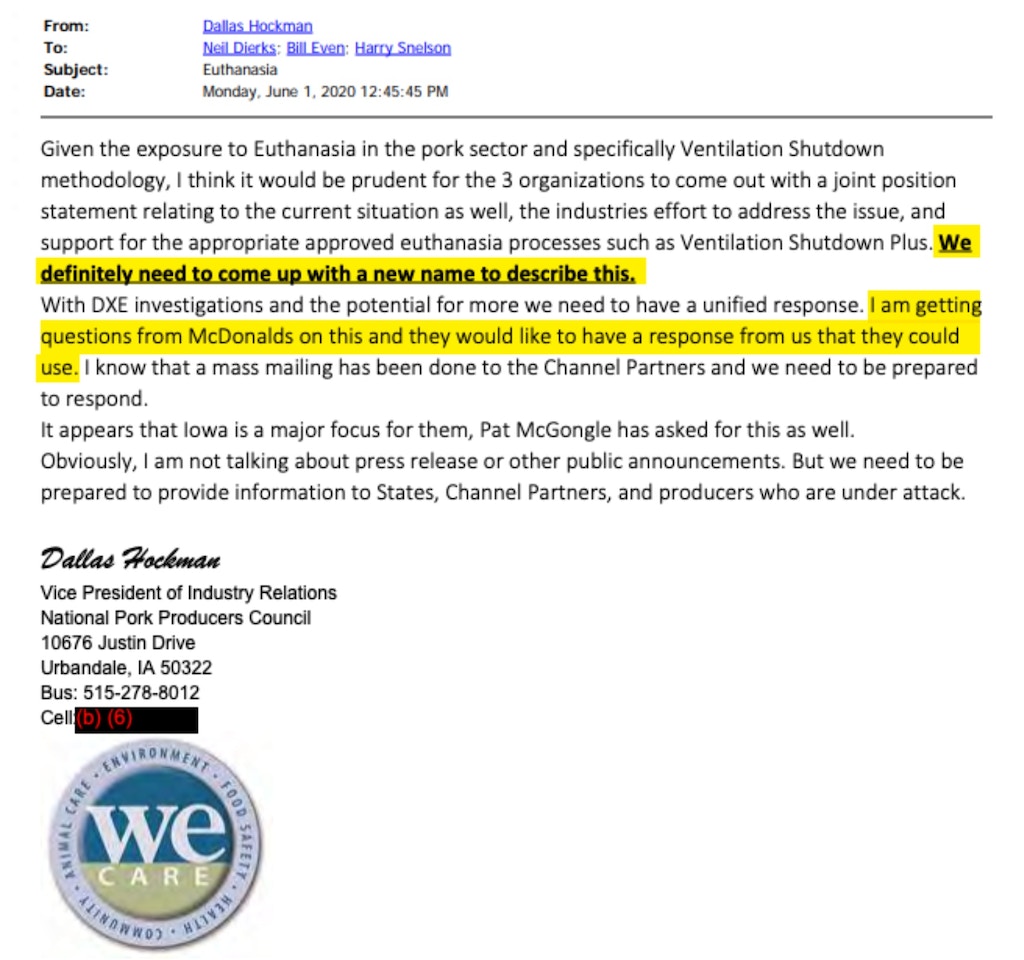 One of the veterinarians indignant about ventilation shutdown extermination programs was Dr. Heath. She was part of a group of hundreds of her veterinarian colleagues to launch a campaign urging the American Veterinarian Medical Association to withdraw its approval of the use of this technique in limited, proscribed circumstances. Though the AVMA says it was not involved in the specific use of the extermination technique by Iowa Select, its guidelines approving of VSD were, as The Intercept documented, cited as justification by the company and its allies.

Dr. Heath was quoted in one news report on the controversy as saying: “I believe the majority of AVMA members do not approve of VSD except as a ‘last resort’ depopulation method and AVMA intended VSD to be used only in extreme conditions of infectious or zoonotic disease outbreaks or natural disasters. AVMA approval has allowed pig and poultry producers to use VSD as a cost-savings procedure to cheaply destroy unprofitable or excess animals.”

Due to her criticisms of these factory farm practices and her work with DxE in advocating industry reform, industry groups focused on her. In one email from April, a vice president of the Animal Agriculture Alliance, Hannah Thompson-Weeman, revealed that an “alert” had been sent about Dr. Heath to California members, accusing her of engaging in “extreme activism” and encouraging groups to “spread the word to your veterinarian contacts in California” — where Dr. Heath practices — “using private, members only channels.” 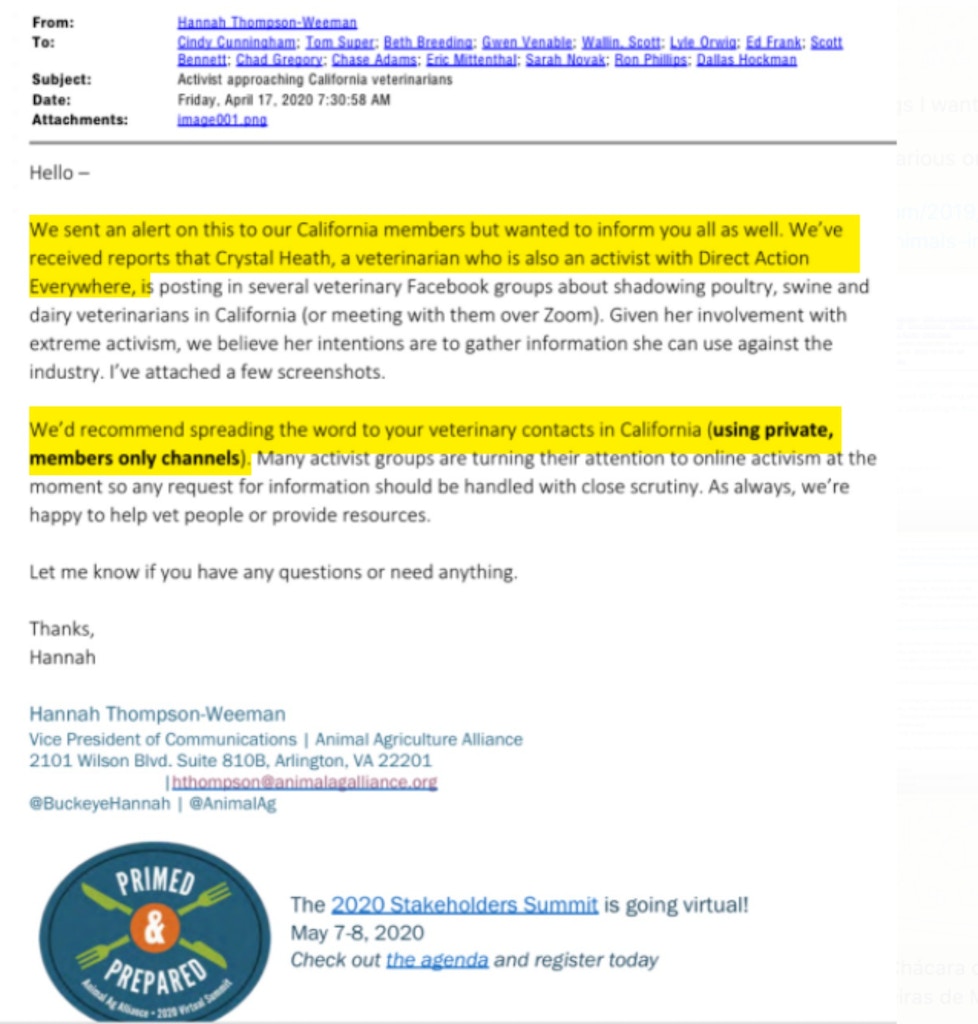 Following that “alert,” Dr. Heath began experiencing targeted campaigns against her online and within her profession. Though it cannot be proven that this was the result of the Alliance’s “alert,” what began happening to her for the first time in the wake of that alert tracked the language used against her by these industry groups. (The Alliance and Thompson-Weeman did not respond to The Intercept’s request for comments. Thompson-Weeman locked her Twitter account yesterday after we previewed this article and the SYSTEM UPDATE episode. The AVMA has denied that it was involved in Iowa Select’s use of VSD.)

What perhaps alerted the Alliance was one veterinarian group that accused her of being “part of an active campaign to cause as much harm as possible to our clients and ourselves,” announcing that they had alerted the Alliance about her. Veterinarian groups on Facebook posted their own warnings about her, and she was banned from some groups. Comments began appearing on her own Facebook page, purportedly from other veterinarians, accusing her of “deranged activism,” being “a liar who makes up stories,” “bastardizing our profession through every available method,” and claiming that she is “literally, by name, a topic of conversation in board rooms from Ag business to organized veterinarian medicine across the nation. Your name is literally toxic.”

What alarmed Dr. Heath most was the emergence online of anonymous flyers which contained a “BEWARE” warning at the top, along with her photo and a string of accusations, some of which were false, that claimed she harbors “an agenda that doesn’t include anything positive for our profession” and “expresses fondness” for “domestic terrorist organizations.” It warned that even allowing her access to the social media pages of veterinarians could be dangerous, and thus urged that she be blocked from all online forums, personal profiles, and social media groups. 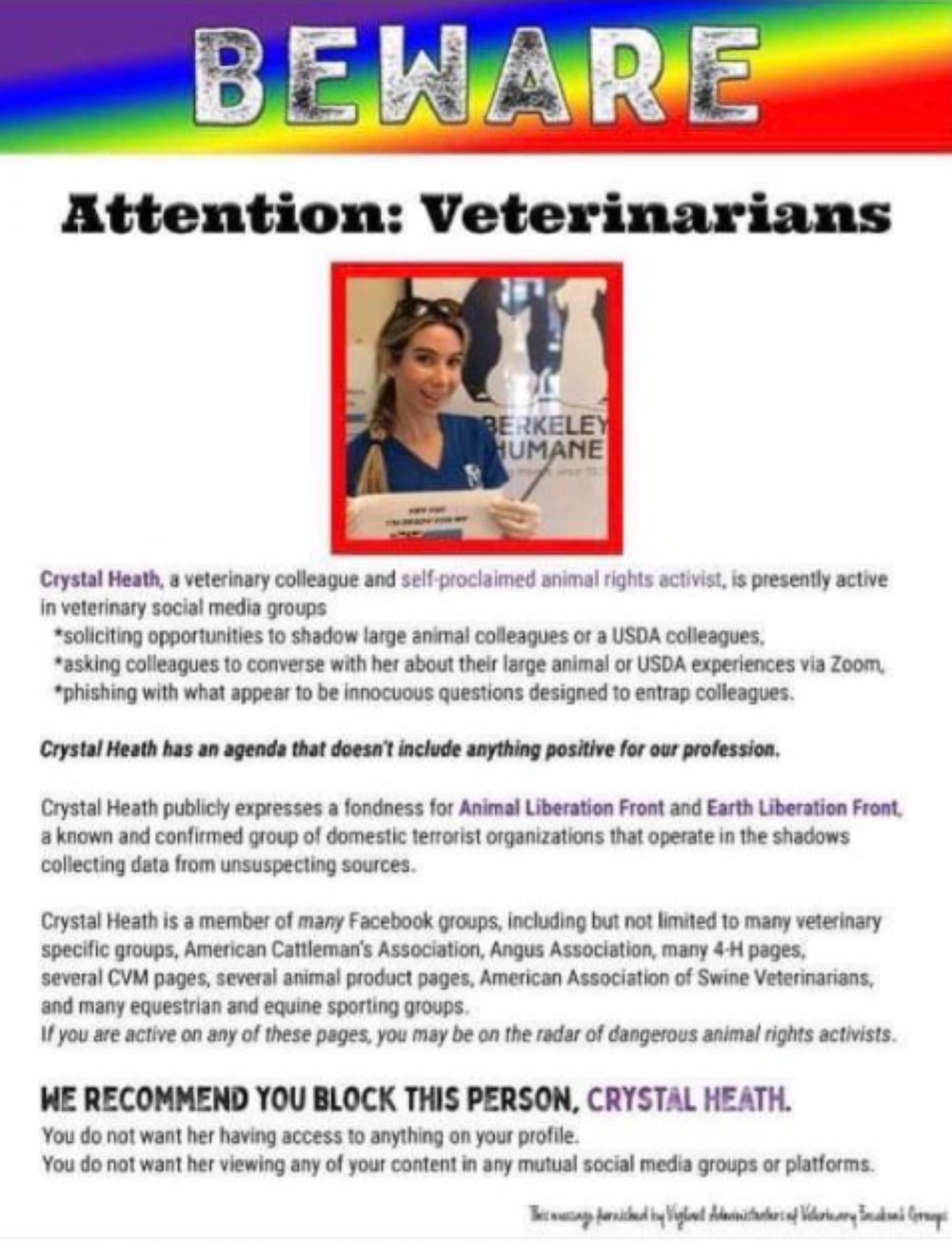 It goes without saying that this sort of a campaign could be devastating to the career opportunities or ability to earn a livelihood of any veterinarian. Fortunately for Dr. Heath, she believes her hard-earned reputation with area clinics developed over many years will enable her to continue to work, but she believes, for very good reason, that “alerts” and campaigns of this sort would make it extremely difficult if not impossible for her to find work anywhere else. For a younger or less-established veterinarian seeing what was done to her, they would obviously think twice about speaking out or working against the factory farm industry, the obvious goal of such campaigns.

That the U.S. Department of Agriculture was in possession of the emails and other documents circulated by industry groups, and thus produced them as part of the FOIA request, indicates that, at the very least, government officials are being included in these discussions (the flyer about Dr. Heath and other social media postings regarding her were obtained by The Intercept from Dr. Heath, not by the FOIA request). What is clear is that the animal agricultural industry essentially operates their own private surveillance and “warning” networks, and uses their extensive influence within the halls of government power to aid their efforts to punish and retaliate against its critics and activists.

Dr. Heath is my guest on this week’s SYSTEM UPDATE. The episode, which can be viewed on The Intercept’s YouTube channel or on the player below, first reviews these new documents in detail obtained by the FOIA request, and I then speak to Dr. Heath about what she has endured as a result of her speaking out against this very powerful industry.