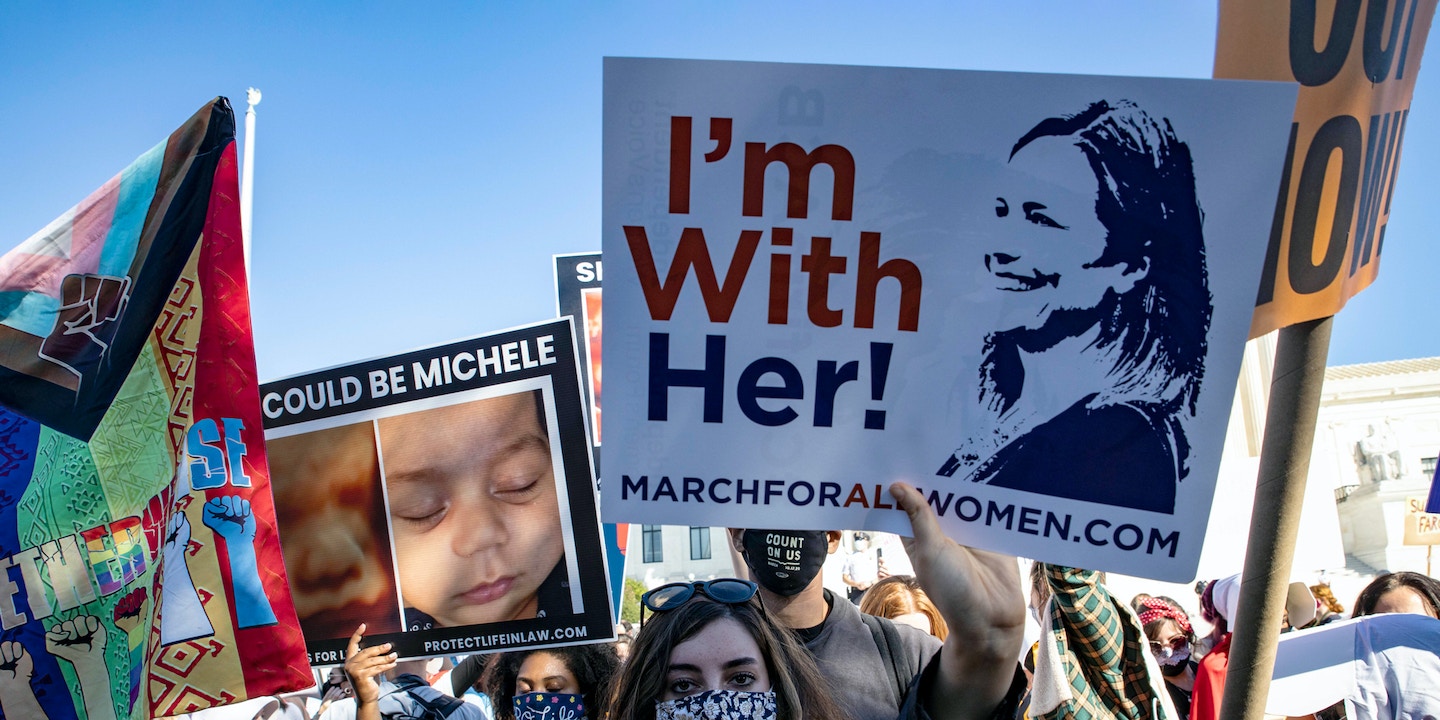 On March 4, the Leadership Institute, a nonprofit that trains conservative political leaders, hosted its monthly “Wednesday Wake-Up Club Breakfast” at its headquarters in Arlington, Virginia. The headliner of this event was Heather Higgins, an heiress to the Vicks VapoRub fortune, as well as the chair of the Independent Women’s Forum and the CEO of its political advocacy arm, the Independent Women’s Voice, right-wing nonprofits that self-describe as nonpartisan. For most of the event, Higgins stood before a clear podium and fielded questions on how to build conservative political influence — at one point revealing that IWF came up with a memo, used by Sen. Susan Collins, R-Maine, on how to support Brett Kavanaugh’s 2018 Supreme Court confirmation without alienating the #MeToo movement.

“I will tell you that I’m extraordinarily proud of IWF,” said Higgins. “We wrote a memo. It was used by a lot of members of the Senate and the House, Fox News, and elsewhere. Most important, Susan Collins told me that without that memo, she would not see how to support him. And if you look at the speech she gave on the Senate floor, it’s entirely the playing out and architecture of how we said to structure the argument — what to say and how to say it, which is just so gratifying. We’re watching TV and we’re like, ‘That’s ours! That’s ours!’” After Collins’s hourlong speech, Sen. Joe Manchin, D-W.V., announced that he would vote for Kavanaugh, helping achieve the threshold of votes necessary to confirm Kavanaugh.

It’s not the first time the IWF and IWV have sought to exert conservative influence over the Supreme Court, often by leveraging their positions as women’s nonprofits. IWF rose out of “Women for Judge Thomas,” which was formed in 1991 to support Supreme Court nominee Clarence Thomas amid Anita Hill’s accusation of sexual harassment. In 2016, IWF and IWV were vocal opponents of President Barack Obama’s Supreme Court pick Merrick Garland and in 2017 pushed for Neil Gorsuch’s quick, quiet confirmation, including by sharing misleading quizzes on the Supreme Court.

Now, IWF and IWV have turned their attention to pushing for the rapid confirmation of Amy Coney Barrett, including staging an “I’m With Her” rally outside of the Supreme Court on October 17, at the same time as a Women’s March. They have been quick to place op-eds in support of Barrett for the Washington Examiner, the Washington Times, and the National Review. On Fox News, where IWF and IWV are regular commentators, Kelsey Bolar, a senior policy analyst at IWF, criticized the Women’s March for “advocating against women, protesting a highly qualified female nominee to the Supreme Court” — part of a broader strategy of casting criticism of Barrett as anti-woman. IWF and IWV did not return a request for comment.

IWF and IWV are carefully branded as independent nonprofits supporting women, regardless of their policy positions, which include opposing Title IX, employer and tax-funded paid leave, and the Violence Against Women’s Act. “Being branded as neutral, but actually having people who know know that you’re actually conservative puts us in a unique position,” Higgins told donors in 2015, a quote unearthed by the Center for Media and Democracy. Beyond this neutral front, the groups are financially tied to an anonymously funded nonprofit network advancing conservative control of the courts, which could set the stage for dismantling the Affordable Care Act, the constitutional right to an abortion, marriage equality, and the regulation of pollutants under the Clean Air Act, and block future progressive (or moderate) legislation.

The central architect behind this ultraconservative vision is Leonard Leo, former vice president of the Koch-funded Federalist Society and President Donald Trump’s adviser responsible for coming with a list of potential Supreme Court nominees. In 2019, an investigation by the Washington Post described Leo as “the maestro of a network of interlocking nonprofits working on media campaigns and other initiatives to sway lawmakers by generating public support for conservative judges,” which has received $250 million from anonymous donors. IRS rules do not require 501(c)(4) nonprofits to disclose corporate funders, allowing corporations to exert an unlimited amount of financial influence behind a veil of nonprofits, which go largely unregulated. IWF and IWV are not controlled by Leo, but they receive funding from organizations in his network. The Freedom and Opportunity Fund, which Leo founded in 2016, gave a total of $4 million in 2016 and 2017 to the Independent Women’s Voice, based on tax filings. In 2018, the Judicial Education Project, the research arm of the Leo-tied Judicial Crisis Network, gave $300,000 to Independent Women’s Forum. (We don’t yet know whether IWF or IWV received another influx of money from the Leo-tied network of dark-money nonprofits, coinciding with the current Supreme Court vacancy; the 990 tax forms for this year won’t be publicly available until November 2021.) Donors Trust, which Mother Jones called “the dark money ATM machine of the conservative movement,” also gave $792,000 in 2017 and $625,000 in 2018 to IWF, according to tax filings compiled by DeSmog.

Lisa Graves, a researcher on the influence of dark money in U.S. politics and the founder of True North Research, notes that the influx of money from Leo-tied nonprofits to IWF and IWV coincides with the period when they were working to keep Justice Antonin Scalia’s vacancy open, while ultimately pushing forward with confirming Gorsuch in 2017 and Kavanaugh in 2018 to the Supreme Court. “We do know that IWF is playing a significant role within this right-wing infrastructure and that includes defending Trump’s nominees, no matter their record,” said Graves.

Another key strategy to influence the courts by IWF and the broader network of Leo-tied nonprofits has been filing amicus briefs, which can make it appear like there is a wider-ranging support or opposition for an issue than in reality. “A small number of donors are trying to orchestrate this legal revolution, but it looks broader than it is because they are throwing their voices through a flotilla of groups, and IWF is one of them,” said Graves.

To push Kavanaugh’s and Gorsuch’s nominations forward, staff of IWF and IWV made appearances on Fox News, wrote blog posts, and placed op-eds, including in the Boston Globe, and praised Gorsuch on IWF’s “Working for Women” podcast. On Tucker Carlson’s talk show, Tammy Bruce, the president of IWV, referred to the sexual assault allegation against Kavanaugh as a “political stunt.” Erin Hawley, a legal fellow at IWF, was quoted in a slideshow published by Refinery21 on what women think about Kavanaugh, which also included quotes from high-profile politicians, like Democratic vice presidential candidate Kamala Harris and Rep. Alexandria Ocasio-Cortez. They hosted an “I stand with Brett” rally on Capitol Hill, along with other groups, including and the Leo-tied Judicial Crisis Network and the anti-LGBTQ Concerned Women for America.

Any victory for Barrett does not fully belong to Higgins and the women of IWF and IWV, but to the long shadow of the private donors for IWF, IWV, and others — right-wing donors that remain largely concealed while wielding increasing power over the most vital decisions, from who we can marry to the quality of the air we breathe. The brochure from the IWF and IWV’s 2019 gala, which lists its private and nonprofit sponsors, offers a partial window into the private corporations funding it. These include Facebook, Juul, Marathon Petroleum Corporation, the American Beverage Association, the Walton Family Foundation (Walmart), Karen Wright (the CEO of the Ariel Corporation, the largest global manufacturer of gas compressors), Amway, and Dick DeVos (former Amway CEO and the husband of Betsy DeVos, the secretary of education). Who won the gala’s “Woman of Valor” Award? None other than Betsy DeVos.

This money isn’t all funneled into IWF and IWV’s efforts to restructure the courts; it could also go to their work advocating for a range of issues that seemingly have little to do with women. In the past few years, this has included downplaying the risks of pesticides and e-cigarettes, spreading climate disinformation by arguing the science on climate change is not settled, and arguing for the privatization of school lunch programs.

A 2016 article by Joan Walsh in The Nation describes how IWF and IWV have come to take on a platform increasingly aligned with the Koch brothers. Walsh traces this shift to 2001, when Nancy Pfotenhauer, the former top lobbyist for Koch Industries, became the president of IWF. In 2003, Pfotenhauer also became president of Americans for Prosperity, a right-wing political advocacy group founded by the Koch brothers. While Pfotenhauer has since left IWF, the ties remain: Sixteen of the current staff and board members of IWF and IWV have worked for organizations that have received Koch funding, according to an analysis provided to The Intercept by True North Research.

In her acceptance speech at IWF and IWV’s gala, DeVos described her goal of chipping away at Title IX, the landmark civil rights law that protects from gender-based discrimination in any educational program that receives federal funding. “So, we are working to dismantle the government social engineering in education, including the previous administration’s staggering overreach on Title IX,” said DeVos, which then credits this policy position to IWF. “You were among the first to sound the alarm decades ago about the downstream unintended consequences of that 1972 law.” Now, as Barrett’s confirmation looms, they are closer than ever to this goal.