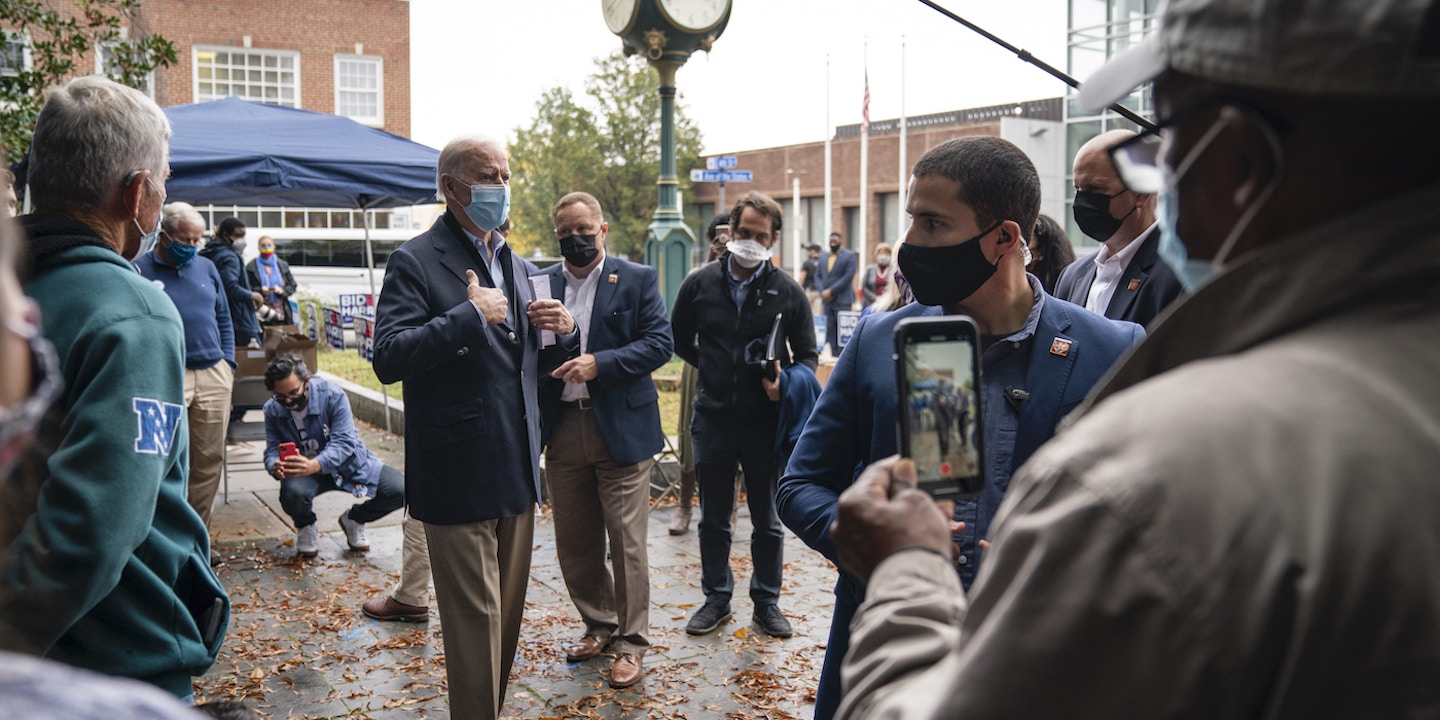 Donald Trump whined about Fox News on Tuesday, telling reporters that the channel he relies on to brainwash voters should give less air time to former President Barack Obama ridiculing him and more to misleading videos of former Vice President Joe Biden, edited to make him look old and unfit for office.

“I only saw he was on Fox,” the president replied when asked what he thought of Obama skewering him during a drive-in rally in support of Biden in Orlando. “Fox puts him on all the time,” Trump lamented. “Fox is very disappointing.”

Trump clearly watched more of the speech than he let on, because 21 minutes into Obama’s remarks — shortly after the former president told the current one, “tweeting at the TV doesn’t fix things; watching TV all day doesn’t fix things” — he tweeted his dismay that Fox was showing it.

Instead of carrying Obama’s speeches live, Trump told reporters after he tore himself away from the television, Fox should really be doing more to help him win next week’s election, like showing snippets of Biden’s recent appearances that have been deceptively edited to mislead viewers about the Democratic presidential nominee’s mental state.

The Trump campaign has produced a series of such videos recently, by monitoring live streams of Biden’s campaign events each day, and then editing his statements entirely out of context to create dishonest clips that fit their caricature of the former vice president as a man in cognitive decline in a way the original recordings do not.

Trump referred specifically to one of those clips, produced on Monday by his team of rapid-reaction liars, when he suggested that Fox “should show the picture of Sleepy Joe yesterday, when he rushed to Pennsylvania — because he saw that I had 25,000 people at each event — when he rushed to Pennsylvania and he did a statement and he got lost in a fog. They should show that.”

(The fact that Trump mistakenly called video of Biden speaking a “picture” — an error he repeated in reference to a different clip moments later — was a reminder of how absurd it is that he, of all people, is trying to argue that anyone who mangles words lacks the mental acuity to be president.)

The video Trump was referring to was a 27-second clip from a 24-minute ABC News live stream of Biden’s visit to meet campaign volunteers at a voting center in Chester, Pennsylvania on Monday. While the video was unaltered, it was posted on Twitter, Facebook and YouTube by the Trump campaign’s director of strategic response, Francis Brennan, with an entirely false caption.

While Brennan claimed that what the video showed was Biden being unable to answer a question about Supreme Court reform, and his staff rushing reporters away to conceal this stumble, anyone who bothers to consult the archived recording of the original stream on ABC’s Facebook page can see that this is a brazen lie.

WATCH: As Biden starts to stumble with a question about court-packing his staff immediately starts escorting the camera out of the event. pic.twitter.com/8KLXiz3GAD

In reality, the part of the video just before what was clipped out by Trump’s aide shows that Biden told his staff that he wanted to speak more with his volunteers before a separate news conference nearby. He then gave a clear and complete answer to a question from a supporter who suggested that he should push back on reporters who raise so-called court-packing.

“I think the press is asking legitimate questions,” Biden began. He then outlined his plan, if elected, to set up a commission of constitutional scholars to make suggestions for court reform, and made specific mention of the possibility of rotating judges off the Supreme Court to circuit courts after a period of time. “I’m not a big fan of court packing,” he added, “but I’m going to listen. I’ll listen to all the ideas there because it’s become a serious question, going into the middle of the 21st century.”

It was at that point that Biden’s staff moved the reporters observing the chat with volunteers a short distance away to where a podium was set up for the news conference. About seven minutes later, Biden came to that podium and made a short statement and took questions, including one from Daniel Bush of PBS NewsHour, who asked if Biden was in favor of introducing term limits for Supreme Court Justices.

Biden replied clearly to that question too, saying without hesitation that he had no intention of ending the lifetime appointments of the Justices, but that he would listen to suggestions from a commission of scholars that would have 180 days to report back with recommendations for reforming the courts.

The Trump campaign’s entirely false claim about the meaning of this 27-second clip, which has already been viewed over a million times on social networks and talked up by the president, followed a similar distortion of Biden’s remarks the day before.

As the Washington Post correspondent Dave Weigel reported, more than a million people viewed another misleadingly edited clip of Biden, this time speaking with the comedian George Lopez during an online event on Sunday, which cut out a question from Lopez to make it seems as if Biden had mistakenly referred to Trump as “George.” Trump and other members of his campaign then claimed that Biden had confused the current disastrous Republican president with the previous disastrous Republican president.

Despite Weigel’s debunking, the Trump campaign’s misleading edit of the video was reported as fact on Monday morning, and not just on “Fox and Friends” but also on the “Today” show where debate moderator Kristen Welker failed to explain how the original context had been changed by removing George Lopez from the exchange.

Seems like the Today Show also just took the Trump campaign video without checking. Not everyone is as pedantic as me about seeing where the hell a video clip came from. https://t.co/qKjJE8LklJ

NBC later added an editor’s note beneath Welker’s report on its website, which explained that: “The video of Joe Biden talking about the 2020 election and ‘four more years of George…’ came from an interview that Biden did Sunday with George Lopez. The fact that Biden was talking with George Lopez was relevant and helpful context that should have been included in the original report.” Even so, the video of Welker’s report, which was broadcast to the show’s millions of viewers, remains uncorrected.

Untroubled by reality, Trump gleefully mocked Biden for the supposed gaffe at a rally in Pennsylvania on Monday, referring to his opponent as “a mess.”

While Biden’s at times halting and often meandering manner of speaking can lead to verbal stumbles — and has resulted in genuine gaffes over his decades in public life — Trump’s attempt to manufacture flubs speaks of a certain desperation.

Later on Tuesday, that deeply dishonest effort continued, with the Trump campaign posting video of Biden at a campaign stop in Georgia saying, “Why am I doing this? Why? What is my real aim?”

Joe Biden: “Why am I doing this? Why? What is my real aim?” pic.twitter.com/pNPfzirGjO

Far from being confused, however, the text of Biden’s prepared remarks made it plain that he was, in fact, quoting from a philosophical letter published this month by Pope Francis.

“In his recent encyclical, Pope Francis warns us against this phony populism that appeals to the ‘basest and most selfish’ instincts,” Biden said. “Then he says this: ‘Politics is something more noble than posturing, marketing and media spin. These sow nothing but division, conflict and a bleak cynicism…'”

“For those who seek to lead, ‘we do well to ask ourselves, ‘Why I am doing this?’ ‘What is my real aim?'” Biden continued, quoting the pope. “Pope Francis has asked questions that anyone who seeks to lead this great nation should answer,” he concluded.