The press secretary is angry CNN misidentified the man posing as a reporter in the briefing room who cheered for her. 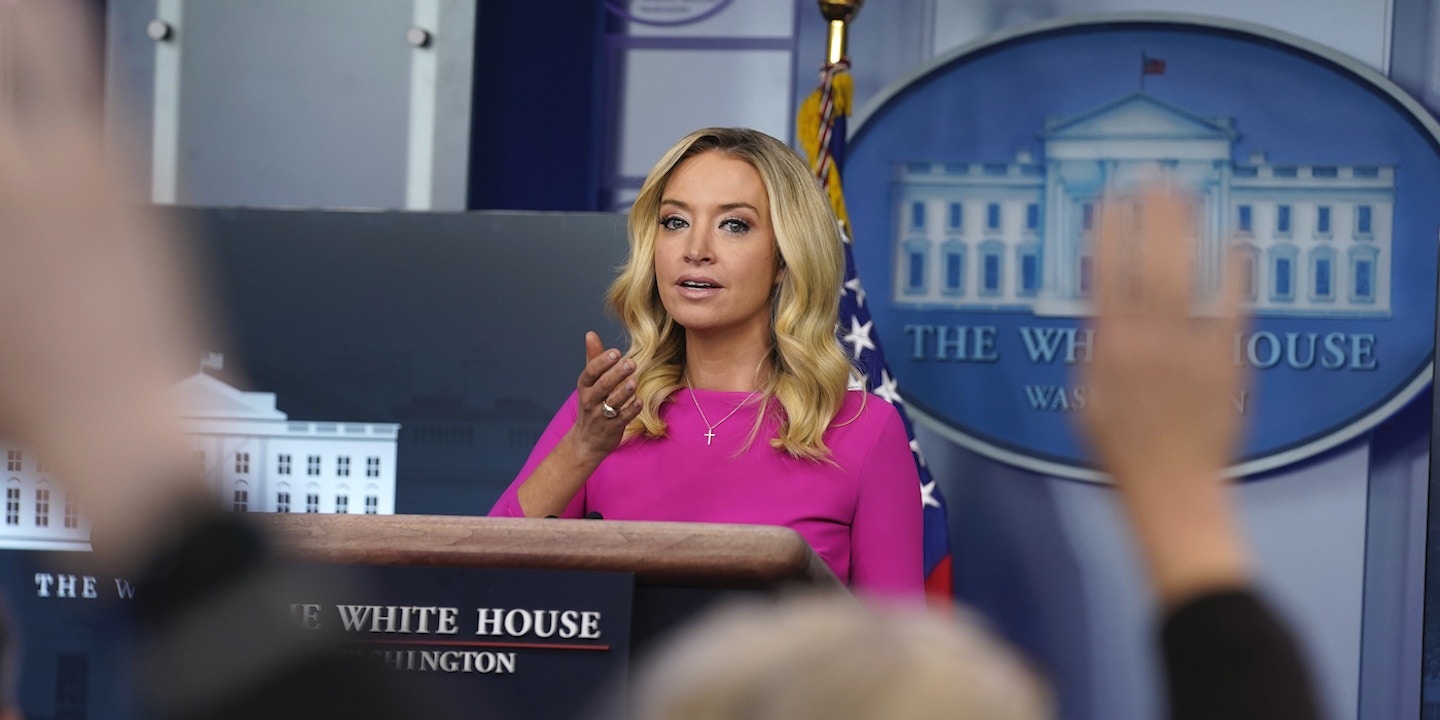 Kayleigh McEnany, who is paid by the public to lie to the public on behalf of a president who lies every day about winning an election he lost, accused the CNN anchor Anderson Cooper of lying on Thursday.

The White House press secretary was enraged that Cooper had wrongly reported that the man who shouted, “You crushed that, Kayleigh!” at the end of her briefing on Wednesday was her husband, Sean Gilmartin.

While an unmasked Gilmartin was one of the guests invited by the press secretary to stand at the back of the White House briefing room — in violation of Covid-19 safety protocols aimed at keeping accredited journalists safe — the cheer had, in fact, come from another White House guest, a pro-Trump podcaster standing next to him.

Cooper, who acknowledged the error on Twitter after his broadcast, had relied on an initial report from a journalist in the room, Chris Johnson of The Washington Blade, who incorrectly identified the source of the cheer in an email to members of the White House pool.

An incident involving the mask-less husband of @PressSec and @dougmillsnyt after the briefing per pooler @chrisjohnson82. pic.twitter.com/laeKLDwttJ

The same report also noted that Doug Mills, a New York Times photographer and White House Correspondents’ Association board member, had confronted Gilmartin about not wearing a mask.

While Johnson corrected his error in a subsequent email sent to fellow journalists less than 30 minutes later, that update somehow failed to reach Cooper before he went on air to amplify the mistaken report.

When McEnany denounced the CNN report on Twitter, she added the misleading claim that it was “disproven by the official White House Pool Report written by a reporter.” McEnany then shared the text of Johnson’s second email, without mentioning the first one, and urged her Twitter followers to “read the pool report below noting it was actually a reporter cheering!”

By posting Johnson’s second email to the pool, however, McEnany inadvertently drew attention to the fact that the cheering man she described as “a reporter,” Alec Lace, is not a journalist at all. Lace, whose presence in the cramped briefing room compromised the health of the accredited reporters around him, is the host of “First Class Fatherhood,” a conservative podcast that has featured the fatherly wisdom of an array of Trump supporters, including: Rudy Giuliani, Sean Hannity, Eric Trump, Mike Pompeo, Mike Lindell, Dean Cain, Dinesh D’Souza and Eddie Gallagher.

Yes that was me who yelled “You crushed that Kayleigh!” At today’s White House Press briefing@PressSec crushed it as always
She is a First Class Mom all the way

Lace, who said his “ultimate goal” when he started his podcast was to interview Trump about fatherhood, insisted on Twitter early on Friday that he was not invited to the White House by McEnany, but refused to say who had admitted him to the briefing room or given him the credentials necessary to enter the White House. The podcaster wrote on his website that he has visited the White House “on multiple occasions” over the past 16 months and had spoken this week with McEnany’s assistant, who told him that he might be able to meet the press secretary on Wednesday.

As I reported in August, McEnany regularly misleads the public by packing the White House briefing room with Trump supporters from far-right media outlets who can be relied on to toss softball questions to her or her boss.

That was evident during Wednesday’s briefing when Johnson, the pool reporter from The Blade, asked McEnany to explain why Trump’s proclamation on World AIDS Day this week, “consistent with his previous three proclamations, omitted any reference to LGBTQ people, even though they bear the brunt of HIV/AIDS.”

McEnany, having no good answer, responded with an easily debunked lie. She claimed that “The President honored World AIDS Day yesterday in a way that no President has before,” by hanging a large red ribbon on the White House, something both Barack Obama and George W. Bush had done before.

As Johnson tried to follow up, asking, “But that doesn’t explain why there’s no reference to LGBTQ people in the proclamation,” McEnany quickly ended the exchange by calling on another friendly face she had planted at the back of the room, pointing to Charlotte Cuthbertson of The Epoch Times.

Cuthbertson threw McEnany a lifeline, by changing the subject to Trump’s threat to veto a defense spending bill unless Congress agrees to repeal liability protections for social media companies in Section 230 of the 1996 Communications Decency Act. The Epoch Times is a rabidly pro-Trump website owned by members of the dissident Chinese Falun Gong spiritual movement who have spent heavily to promote Trump as a useful battering ram against their ultimate enemy: the Chinese Communist Party that considers the banned sect a cult.

Cuthbertson did not respond to a request for comment, but an Epoch Times spokesperson told The Washington Post in August that the outlet’s staff was attending briefings despite not being on the White House Correspondents’ Association rota, “on the invitation of White House press secretary Kayleigh McEnany.”

Cuthbertson’s report on McEnany’s response to her question appeared on the Epoch Times home page on Thursday, alongside fanciful reports of imaginary anti-Trump voter fraud and beneath the banner headline: “ELECTION OUTCOME UNCLEAR AMID PENDING RECOUNTS AND LEGAL CHALLENGES.”

Correction: December 4, 2020, 1:25 a.m. PT
An earlier version of this article mistakenly reported that the conservative podcaster Alec Lace was invited into the White House briefing room by Press Secretary Kayleigh McEnany. According to Lace, someone else at the White House he refused to name had given him access to the building and he spoke with McEnany’s assistant, who told him that he might be able to meet the press secretary on Wednesday. He wrote on his website that he entered the briefing room without permission and refused to leave when a journalist told him that he was not allowed to be there.