Democratic Majority for Israel’s endorsement of Warnock — and Warnock’s embrace of it — was a step backward for progressives. 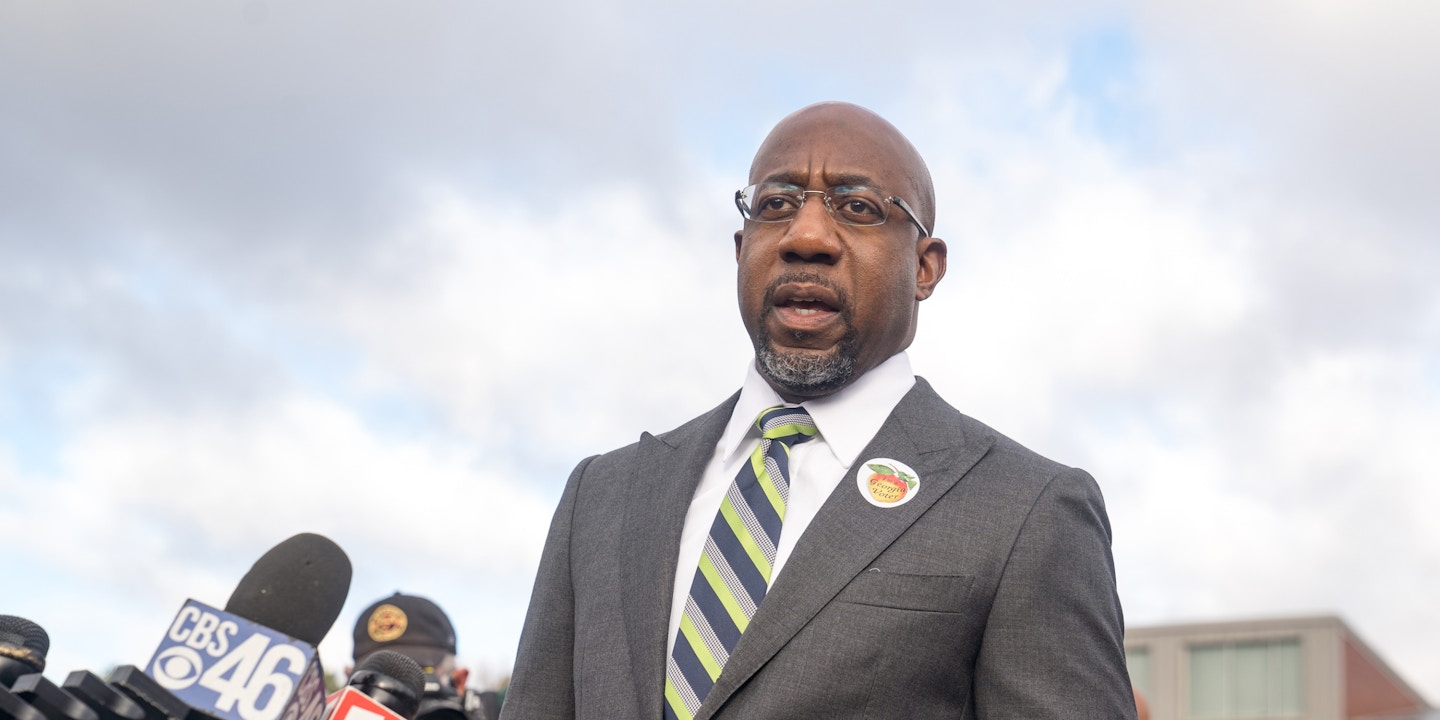 Israel was not expected to be a prominent issue in the runoff for a Senate seat in Georgia. The Rev. Raphael Warnock, the Democratic nominee for the seat, wasn’t running on foreign policy and barely mentioned it at all during his campaign — until Republicans started launching attacks on him.

Republicans homed in on the reverend’s past remarks condemning Israeli human rights abuses against Palestinians. Following a news report that resurfaced old comments, his opponent in the January 5 runoff, Sen. Kelly Loeffler, began running attack ads. One focused on a 2018 sermon in which Warnock condemned Israel for directing fire at unarmed Palestinian protesters near Israel’s separation fence with the occupied Gaza Strip.

In response, Warnock has come out in recent months as a staunch supporter of the U.S. relationship with Israel, distancing himself from past comments on the conflict.

Warnock’s shift on Israel won him an endorsement from the Democratic Majority for Israel, or DMFI, a centrist Democratic PAC that has engendered controversy in its short, one-year life for frequent attacks on party progressives.

In September, DMFI endorsed Jon Ossoff, who will face Republican Sen. David Perdue in the runoff for Georgia’s other Senate seat, along with 83 other congressional candidates. But it did not back Warnock until last month: The endorsement finally came the day after a call with the Jewish Democratic Council of America, when Warnock walked back past stances on Israel, including the sermon touching on Israel’s actions at the Gaza border.

The Democratic Party’s relationship with Israel is undergoing a seismic shift. The once-impenetrable unity on nearly unconditional support for Israel has given way to progressives elected in recent years who are willing to call the Jewish state to account for human rights violations. That shift was a belated expression of a long-held sentiment among the party’s progressive base: that as the U.S. reevaluates alliances with countries that abuse human rights, Israel should not be an exception.

“Warnock does not want to be in a position of having had the opportunity to take steps to defend against the ‘radical’ label without taking them,” said Yousef Munayyer, a political analyst and senior fellow at Arab Center Washington DC. “In this sense, DMFI might be useful to him, not because it will win him any votes, but probably because he is under pressure from conservative democrats to do things to beat back against the Republican framing of him.”

Munayyer, though, said the tack could have costs: “I don’t think this is very smart, because it allows the GOP to dictate the discourse around the race and might even alienate some progressive voters who are increasingly unwillingly to ignore the Palestinian issue.”

To progressive activists working on the Israeli-Palestinian conflict, the DMFI’s endorsement of Warnock, and Warnock’s fawning embrace of it, represented a step backward from this progress: an otherwise unabashed proponent of social justice kowtowing to a special interest group that has sought to minimize human rights abuses abroad.

“I think that DMFI represents the worst kind of status quo in Washington, D.C.,” said Beth Miller, government affairs manager at Jewish Voice for Peace, a national organization focused on ending the Israeli occupation and enacting a human rights-based U.S. foreign policy. (The group’s political arm, JVP Action, did not make an endorsement in either Georgia Senate race.) “What they try to message out is the idea that, ‘Don’t worry, the Democratic Party is still unquestioningly pro-Israel and unquestioningly anti-Palestinian.’ That is essentially DMFI’s message. ‘Don’t worry, the Democratic Party still loves Israel.’ That’s what they’re trying to ensure stays the case.”

Progressive activists working on the issue fear that DMFI’s entry into races like Warnock’s — and candidates’ embraces of its endorsements — will help to ensure that politicians who then win election will shy away from criticizing Israel in office.

Warnock’s possible election could be a test case. After being attacked for being anti-Israel, Warnock espoused many of the talking points that DMFI has itself used: supporting unconditional military aid for Israel; disavowing the movement to boycott, divest from, and sanction Israel, known as BDS; and to strengthen the U.S.-Israel relationship.

Those positions could end up becoming legislative issues. Pro-Israel politicians have been pushing anti-BDS legislation, and progressive Democrats have sought to condition aid to Israel on its human rights record. If Warnock is held to his commitments, he could end up facing off against progressives on those issues — and aligning with DMFI on behalf of centrists and even the right.

Thank you to my friends at @DemMaj4Israel. I’m proud to receive your endorsement & I’m grateful for the work you do to support our party’s values. Echoing Dr. King, as senator I’ll stand for Israel’s security & will work to strengthen the alliance between our nations. https://t.co/amXY2Vmvmm

After entering the Senate race, Warnock was more or less silent on foreign policy — it just didn’t come up. And Republicans never brought up his past remarks.

Those comments suddenly surfaced when Warnock won enough votes on Election Day to force a runoff. The attacks focused mainly on two things: the remark about Gaza in the sermon, made two years ago, and Warnock’s signature on a letter comparing the occupied West Bank to the apartheid-era occupation of Namibia by South Africa, which followed a visit to the occupied Palestinian territories last year.

For decades, such statements would court controversy among fellow Democrats, but those days have since lapsed. Instead, unflinching support for Israel has increasingly become a Republican position, further polarizing the Israel debate.

When Warnock forced the runoff, showing high favorability ratings, right-wing, pro-Israel forces began to coalesce around the attack line that the pastor was anti-Israel. Loeffler said in a tweet on November 9 that Warnock had “a long history of anti-Israel extremism” and shared a link to an article from a right-wing website that resurfaced his letter signature. The tweet came after a different website, Jewish Insider, had reported on the signature and the 2018 sermon.

During a debate last month, Loeffler again accused Warnock of being anti-Israel and anti-Semitic for supporting Jeremiah Wright, President Barack Obama’s controversial former pastor. Shortly after the debate, Loeffler’s campaign released new ads zeroing in on Warnock’s past comments on Israel, saying he compared it to “a racist country” and that he “sided with terrorists who hate America and would destroy Israel” — citing as evidence a clip from a past sermon in which Warnock says that “Palestinian lives matter.”

Throughout, Warnock’s campaign has pushed back against this line of attack. In November, he released a policy paper on Israel opposing BDS and supporting military aid to the Jewish state, as well as an op-ed for Jewish Insider reiterating those commitments.

The call with the Jewish Democratic Council of America, which describes itself as socially progressive and pro-Israel, was part of the pushback and, a day after the call, DMFI made its endorsement. (The campaign declined to comment on the endorsement process. DMFI spokesperson Rachel Rosen said the group had a series of conversations with Warnock and his campaign but would not elaborate on who approached whom.)

In response, Warnock tweeted, “Thank you to my friends at @DemMaj4Israel. I’m proud to receive your endorsement & I’m grateful for the work you do to support our party’s values. Echoing Dr. King, as senator I’ll stand for Israel’s security & will work to strengthen the alliance between our nations.”

“When a person seems to shift course suddenly during an election, it suggests they are doing it out of political interest and not conviction,” said Munayyer. “Time will tell if Warnock, if elected, will have opportunities to stand for Palestinian human rights in the Senate and we will then see where the reverend’s conscience takes him.”

Though DMFI insists its activism is in line with Democratic Party politics, the group has often allied with and even taken money from more right-leaning groups to support its causes.

Upon its inception last year, DMFI stepped quickly into several competitive races during 2020’s congressional and presidential primaries. The group spent $800,000 on ads against Sen. Bernie Sanders, I-Vt., in Iowa, then in Nevada got fundraising help from the American Israel Public Affairs Committee to launch more ads against the progressive.

In another hotly contested primary, the group backed New York Rep. Eliot Engel, a staunchly pro-Israel Democrat, against progressive challenger Jamaal Bowman in June. In the weeks leading up to the primary, the group accepted $100,000 from a right-wing pro-Israel PAC, Americans for Tomorrow’s Future. DMFI also ran ads attacking Bowman. The ads didn’t center on Israel, but rather attacked Bowman for old unpaid tax bills by taking up a conservative talking point on government spending: “Shouldn’t Mr. Bowman pay his own taxes before he tries to spend ours?” Even Engel called on the group to remove the ads, but DMFI stood fast. Nonetheless, Bowman won the race.

Then there’s the substance of DMFI’s advocacy. On December 1, DMFI sent a memo to congressional staffers making excuses for Israel’s demolition of homes in the West Bank in November, +972 Magazine reported. The effort was aimed at criticizing a letter sent by 41 congressional Democrats to Secretary of State Mike Pompeo condemning the demolition and “creeping annexation,” but ended up turning the focus on DMFI because the group had used materials from a right-wing pro-settler Israeli organization in its pushback.

DMFI’s entry into the Warnock race has dimmed any prospect that Warnock might have added a progressive voice on Israel to Congress, but the trend among Democratic voters is moving in the opposite direction. One way or another, said Miller, of Jewish Voice for Peace, politicians will have to catch up — despite groups like DMFI protecting the old, crumbling consensus.

“The future of the Democratic Party is conditioning military funding to Israel and eventually cutting that funding to Israel,” she said. “The future of the Democratic Party is for Palestinian rights — if for no other reason than that the Democratic base is overwhelmingly supportive of Palestinian rights — and of leveraging our military funding to ensure that the Israeli government is not oppressing Palestinians. And so it’s a matter of time before the party catches up to where the base is. And it might take a little while to get there, but it will happen. The winds are clear which way they’re going.”