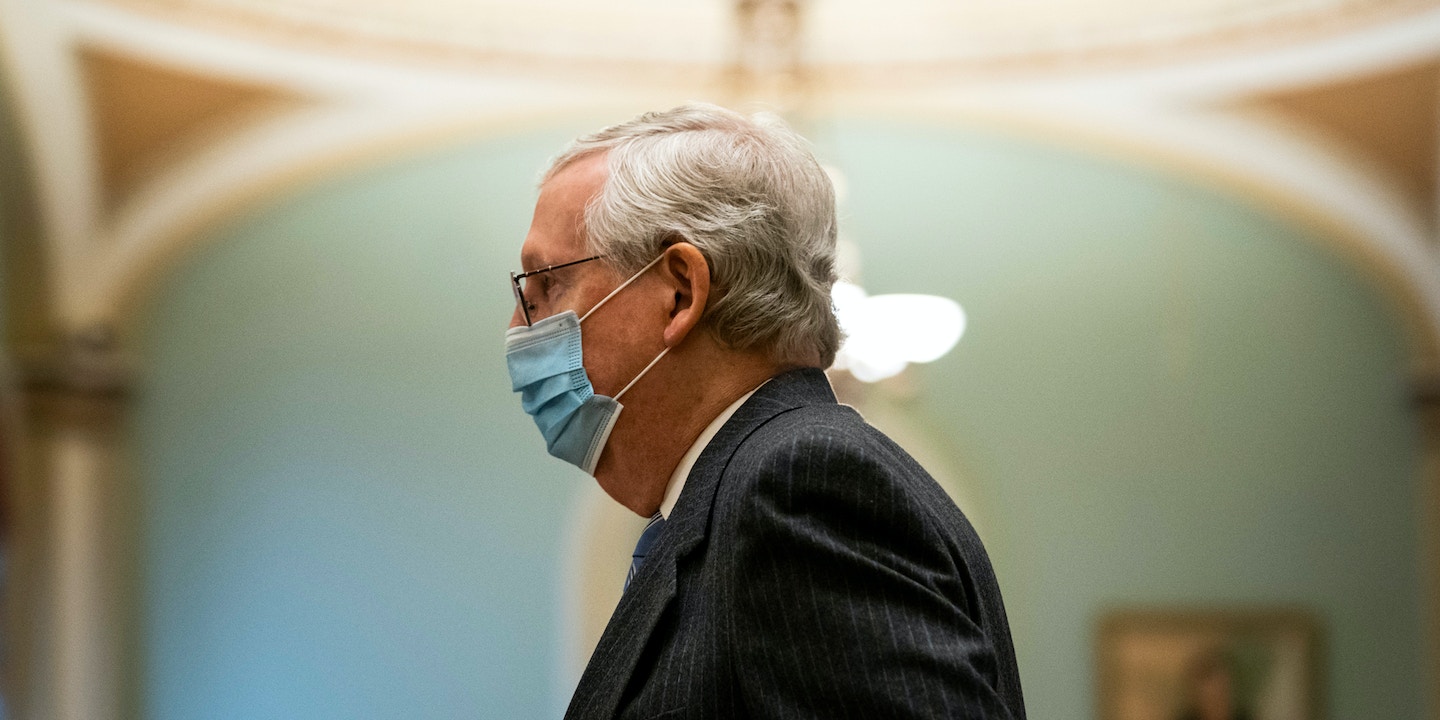 Senate Minority Leader Mitch McConnell has compiled a short list of successors in his home state of Kentucky, preparing for the possibility that he does not serve out his full term, Kentucky Republicans tell The Intercept.

Under current law, the power to appoint McConnell’s replacement falls to Democratic Gov. Andy Beshear. But new legislation McConnell is pushing in the Kentucky General Assembly would strip the governor of that power and put it into the hands of the state GOP.

McConnell’s scramble to secure his legacy comes as his position in the party he effectively built from the ground up is increasingly shaky. McConnell’s denunciation of former President Donald Trump — even as it was accompanied by a vote of acquittal and a pledge to endorse the former president in 2024 if he is the GOP nominee — has brought on calls for his censure by party leaders across the state. A candidate running in McConnell’s mold would face an uphill climb through a primary in the new Republican Party — unless, that is, the candidate has the benefit of incumbency.

The 79-year-old McConnell has held his Senate seat since 1985 and handily won a seventh term last November.

The new legislation, Senate Bill 228 — dubbed by some inside the state Legislature as the Daniel Cameron Election Bill — was filed on February 10, 2021, during the Kentucky General Assembly’s 30-day “short” session. The bill alters current state statute that allows the governor to appoint a replacement in the event of a vacancy to the U.S. Senate. If the bill becomes law, the appointment to fill a vacancy will be selected from a list of three names submitted by the state executive committee of the same political party as the senator who held the vacant seat. According to the bill, the appointee from that list will then serve until a successor has been elected by voters. The legislation goes on to list instructions on when elections take place in the event of a vacancy. How long the appointment would last depends on when the vacancy occurred.

Republicans are concerned a successor appointed by Beshear would be someone of Beshear’s own party — rather than who McConnell would like to replace him.

Republican state Sen. Tom Buford, the single co-sponsor on the bill brought by Kentucky Senate President Robert Stivers, said there has been a discussion for “several years” about changing the way Kentucky replaces U.S. senators.

“No specific reason why now,” Buford continued in a phone interview, adding that he believes both McConnell and U.S. Sen. Rand Paul are in “good” health. Buford did say things could have turned out bad for Paul in 2017, after the junior senator was attacked by his Bowling Green, Kentucky, neighbor Rene Boucher. Paul suffered six broken ribs and ended up having part of his lung removed as a result of the attack.

“That could have resulted in death, so … it sounded like a good idea,” Buford said, listing reasons why Kentucky Republicans would seek to change the law in the months after McConnell’s reelection to seventh term in the Senate.

“Leader McConnell has discussed the legislation with [Senate] President Stivers and is fully supportive of the measure,” a spokesperson for McConnell confirmed.

Multiple sources say it is McConnell who is pushing this bill, but the claimed reasons for why he is pushing the legislation vary from health concerns to the makeup of the upper chamber.

McConnell’s health has been a concern since boyhood. In 1944, he contracted polio and with his mother’s persistence, the young McConnell recovered and learned to walk again. In 2003, McConnell underwent a triple bypass heart surgery. In late October 2020, McConnell dismissed concerns over his health after appearing with bruised and bandaged hands days before his reelection. The previous year, the Kentucky Republican spent weeks recuperating after a fall which forced him to have surgery for a shoulder injury.

Other Republicans in the Kentucky Legislature, who asked not to be identified over fear of reprisal from their party, see this move as less about McConnell’s health and more about hand-selecting his replacement and giving that successor the benefit of incumbency. One frustrated Republican elected official, who declined to be named for the same reason, referred to the bill as McConnell’s “escape hatch.”

Inside a small two-story house that carries McConnell’s name, the leadership of the Republican Party of Kentucky is monitoring plans, and according to some, there are already discussions on who could replace him in the event of a vacancy for his seat. There are already three names that consistently come up on the potential list.

McConnell is interested in his legacy, and by picking his replacement, he would cement his vision in Kentucky and national politics.

McConnell has played an outsized role in the public life of those on the list to replace him. It was McConnell who ensured an endorsement for Daniel Cameron from Trump; McConnell also secured a speaking role at the Republican National Convention and an Oval Office meeting for Cameron, who served as McConnell’s general counsel and has a father-son relationship with the senator. Likewise, when many expressed doubts over Kelly Craft’s lack of experience and continual absence from her previous post, it was McConnell who shepherded the megadonor through the Senate confirmation process for the U.N. ambassadorship. His ties to Craft date back to 2004.

This legislation is reflective of the long game McConnell has played his entire career.

Michael Adams is not as close to the minority leader as the others on the list, but he does run in the same circles as those in McConnell’s inner circle, like Scott Jennings, who ran a super PAC that spent millions to bolster McConnell’s reelection efforts in the bluegrass state.

Others close to McConnell say he is backing the bill because of the razor-thin margins in the U.S. Senate. For those Republicans, McConnell is seeking to protect the upper chamber from adding an additional Democrat.

The truth is probably somewhere in between all of these theories: McConnell is 79 years old, he’s a master of the Senate, and he’s focused on his legacy in a state that still strongly supports Trump. This legislation is reflective of the long game he has played his entire career.

The legislation is currently before the state Senate and then would need to pass the House. Beshear, the Democratic governor, is reportedly opposed to the bill, but Republicans have held veto-proof majorities in both chambers since 2017.