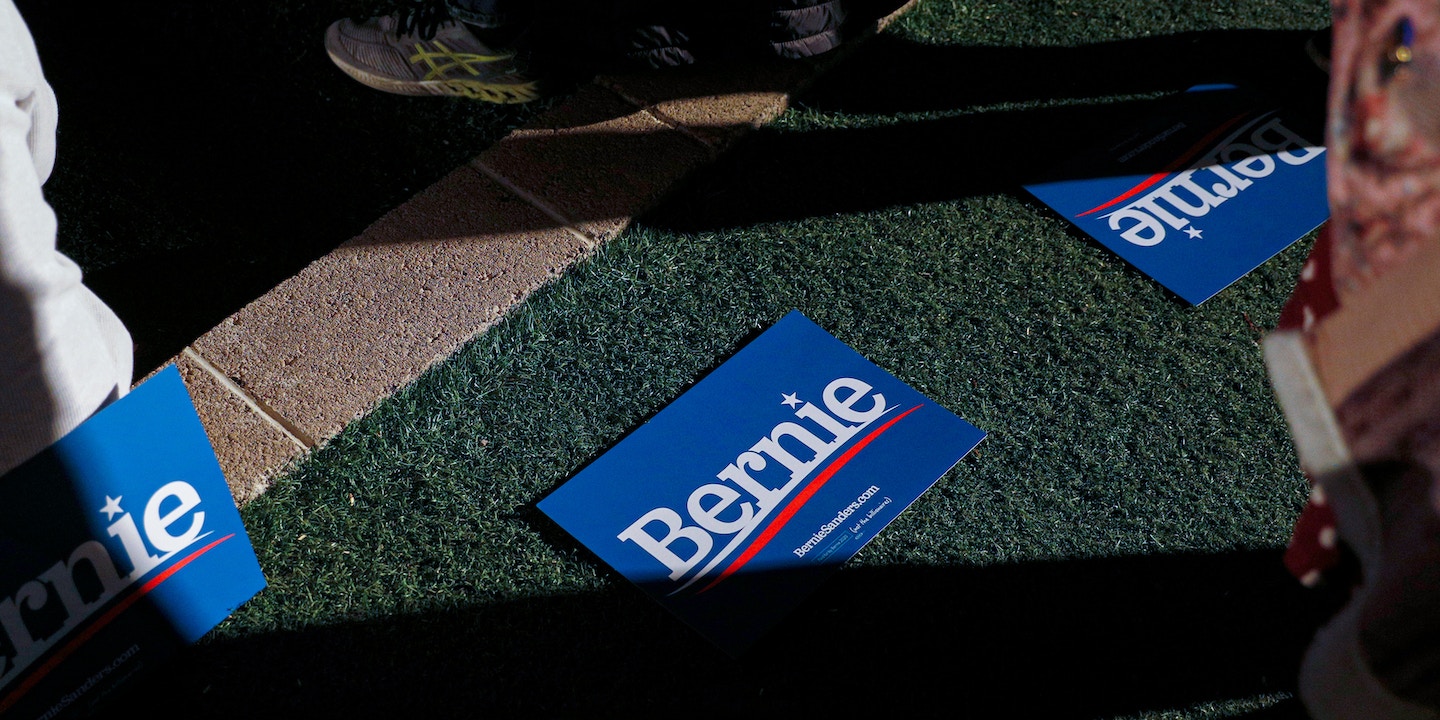 Not long after Judith Whitmer won her election on Saturday to become chair of the Nevada Democratic Party, she got an email from the party’s executive director, Alana Mounce. The message from Mounce began with a note of congratulations, before getting to her main point.

She was quitting. So was every other employee. And so were all the consultants. And the staff would be taking severance checks with them, thank you very much.

On March 6, a coalition of progressive candidates backed by the local chapter of the Democratic Socialists of America took over the leadership of the Nevada Democratic Party, sweeping all five party leadership positions in a contested election that evening. Whitmer, who had been chair of the Clark County Democratic Party, was elected chair. The establishment had prepared for the loss, having recently moved $450,000 out of the party’s coffers and into the Democratic Senatorial Campaign Committee’s account. The DSCC will put the money toward the 2022 reelection bid of Sen. Catherine Cortez Masto, a vulnerable first-term Democrat.

While Whitmer’s opponents say she was planning to fire them anyway, Whitmer denies that claim. “I’ve been putting in the work,” Whitmer told The Intercept for the latest episode of Deconstructed. “What they just didn’t expect is that we got better and better at organizing and out-organizing them at every turn.”

The battle between the insurgent progressive wing of the party and what’s known in Nevada as the Reid machine — a tightly run operation still guided by former Senate Majority Leader Harry Reid — began five years ago, when Vermont Sen. Bernie Sanders organized support for his 2016 presidential primary run, while Reid was working behind the scenes to help his opponent, Hillary Clinton.

Over the next four years, outside organizations like DSA exploded in size and strength. The Sanders campaign focused on organizing tens of thousands of young Latino voters in the state, with the goal of activating people whom the party hadn’t bothered with before. And it worked: In the 2020 cycle, after investing heavily in Nevada, Sanders won a commanding victory in the Nevada caucuses.

When the Sanders campaign ended, the organizers behind it were ready to take their project to the next level. Progressive groups like the Clark County Left Caucus, of which Whitmer was chair, and local DSA chapters had been organizing for Sanders across Nevada since 2016. They used their momentum, and the state-level delegates they picked up during the caucuses, to continue activating progressive pockets in the state with a focus on local office. Progressives led by the Left Caucus won a majority on the state Democratic board this summer, a sign that their momentum was growing even without a candidate at the top of the Democratic ticket to get behind.

“This was certainly kind of immediately made possible by the caucus outcome,” Keenan Korth, a member of the state party’s central committee who is supporting Whitmer, told The Intercept. “But it really started before then, in that the caucus results were in and of themselves the result of a sustained organizing effort, and the slow accumulation of organizing infrastructure here post-2016, in large part through the campaign in 2018 for Amy Vilela.” Vilela ran for Congress in Nevada in 2018 and later became Sanders’s Nevada campaign co-chair.

During the presidential race, the conflict between the Sanders element and the Reid machine had been kept below a boil partly as a result of the personal relationships at play. Sanders’s 2020 brain trust was significantly made up of former aides to Reid who remain on good terms with the former majority leader, including campaign manager Faiz Shakir; deputy Ari Rabin-Havt, who has since returned to Sanders’s Senate office; and national policy director Josh Orton.

But when the Sanders campaign ended, the establishment was ready to maneuver against them.

The Left Caucus and DSA organizers ran a slate of candidates for state party leadership under the name “The NV Dems Progressive Slate.” All but one candidate on the slate was a dues-paying member of a local DSA chapter. The Democratic Party ran candidates on a slate titled “The Progressive Unity Slate,” playing on a theme they’d been pushing the entire cycle: The groups angling for change from the left were trying to divide the party, they said, while they were trying to save it.

Whitmer faced pressure to drop out of the race, and allies of Reid were working their connections to try to keep the party structure intact. A letter circulated accusing Whitmer of blocking the creation of diversity caucuses, though Whitmer told The Intercept it was a disagreement over process. The fight also drew the attention of Cortez Masto, who asked Whitmer to drop out and approached her opponent, Clark County Commissioner Tick Segerblom, about running. Segerblom had chaired the party in the 1990s and wasn’t considering running for the seat.

Segerblom, who supported Sanders in both 2016 and 2020 and chaired his state campaign, confirmed that Cortez Masto approached him about running. He sees the current fallout as an unfortunate culmination of a back-and-forth that’s been happening since 2016. “There’s been a lot of disagreement within the party since 2016,” Segerblom told The Intercept. “This is just a situation where the Bernie team won, and the old guard so to speak were not gonna stick around.” Cortez Masto’s office did not respond to a request for comment.

After the results, Mounce sent the email making clear that everyone on the small staff had resigned, including the party operations director, communications director, research director, and finance director.

The mass exodus of party staff, despite the rhetoric around unity, wasn’t a shock, Whitmer told The Intercept. “We weren’t really surprised, in that we were prepared for it,” she said. “But what hit us by surprise and was sort of shocking is that for a slate that claimed that they were all about unity, and kept this false narrative of division going on throughout the entire campaign — in fact they kept intensifying that — that’s what was surprising about it, was the willingness to just walk away, instead of working with us.”

“For a slate that claimed that they were all about unity … that’s what was surprising about it, was the willingness to just walk away, instead of working with us.”

Mounce, the Nevada Democrats director who notified Whitmer of the staff resignations, didn’t respond to a request for comment. Korth told The Intercept Mounce is now providing access to logins and other information to Whitmer and her team. But the ruthlessness on display in her email to Whitmer is part of what has made the Reid machine so effective against Republicans in the state, but it’s unclear how it’ll work against the party’s progressive wing. The Democratic National Committee hired Mounce as their new political director last month.

Whitmer’s predecessor, former Clark County Democratic Chair Donna West, said Whitmer did not try to bridge gaps within the party. She “does not listen to others’ opinions and really take those on board,” West said. “I found that working with her could be really difficult, that she doesn’t really collaborate well, and doesn’t work to build consensus.” West resigned last summer.

A former Nevada Democratic Party staffer, who requested anonymity to speak freely, told The Intercept they quit out of a belief that Whitmer hadn’t built relationships across the party as Clark County chair and was at times unfairly critical of the state Democratic Party. “I knew I couldn’t work with her and watch her destroy the years of hard work so many operatives put into making our state party the best state party in the country.”

In a twist of history, Reid himself actually produced the conditions that led to his own lieutenants getting tossed from office. It was Reid who successfully maneuvered in 2008 to make Nevada the first presidential caucus in the West. His reasoning was simple: He wanted presidential candidates to have to take a position on whether nuclear waste should be stored at Yucca Mountain. More precisely, he wanted that position to be no. In exchange for Barack Obama’s promise to scuttle the Yucca Mountain project, Reid endorsed him, after encouraging him to run. It worked: Obama appointed a former aide of Reid’s to the Nuclear Regulatory Commission with instructions to halt the project.

Reid also wanted the caucus to help build the party’s infrastructure, and that worked too. After years of Republican control, Democrats now hold the governor’s mansion, the state Senate, and the state House, as well as both U.S. Senate seats. Without those two senators, there’d be no Democratic majority in the Senate today. But the caucuses also created an opening for Sanders, and his supporters have run through it to swamp the party. Instead of finding a way to work with the newcomers, the Reid machine is setting up an independent shop. Reid declined to comment.