Montana is the first state where Republicans control the legislature and governorship that has failed to pass “right-to-work” laws. 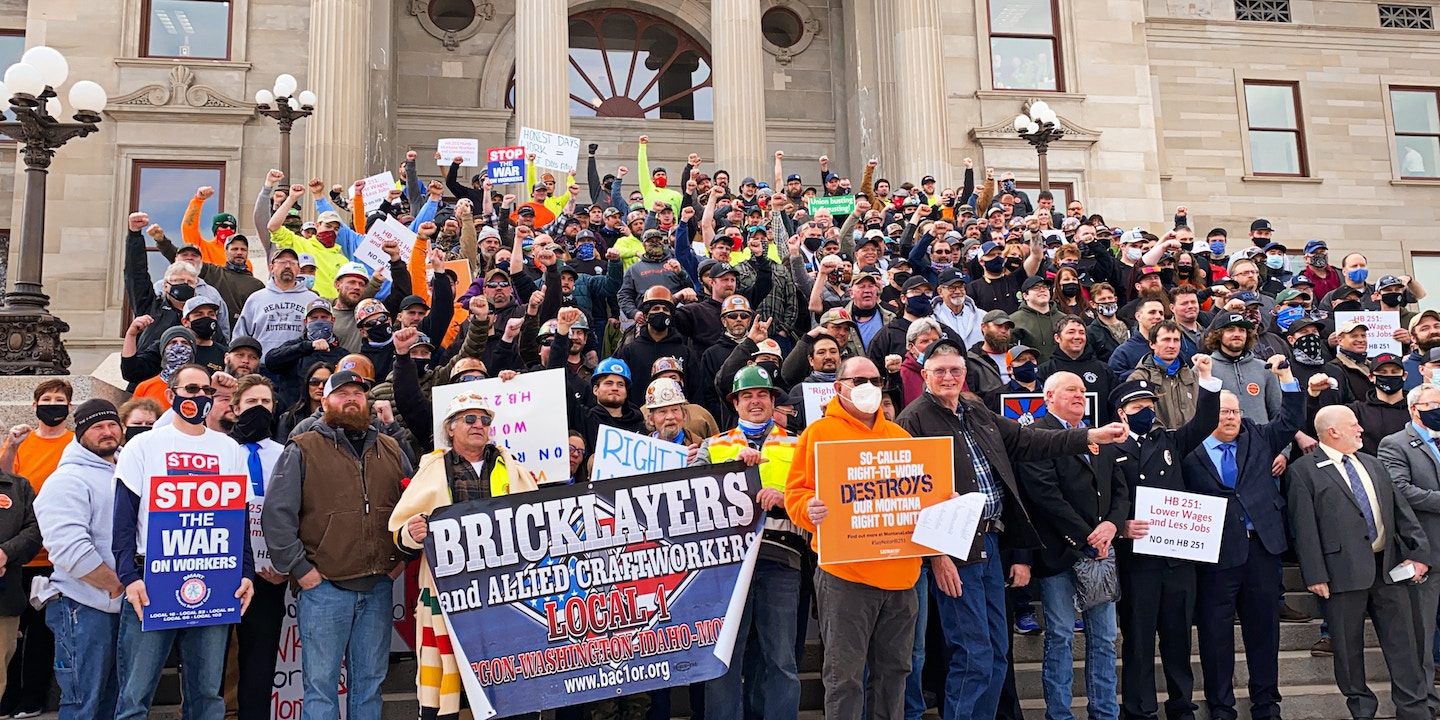 The labor movement in Montana scored a historic win earlier this month when a coalition of Democrats and moderate Republicans defeated a “right-to-work” bill on the floor of the Montana House of Representatives. What makes it more surprising is that the bill had the support of the state’s governor and legislative leaders as well as an unspecified level of support from the Koch-backed dark-money group Americans for Prosperity, which has successfully pushed right-to-work laws in other states.

Since the twofold combination of Citizens United v. FEC and Charles Koch’s decision to dramatically ramp up his political activity, labor has been dealt a string of legislative defeats at the state level. Right-to-work laws, which eliminate the requirement that people represented by a union join and pay dues to the union in the private sector, passed in Indiana and Michigan in 2012, Wisconsin in 2015, West Virginia in 2016, and Kentucky in 2017. A right-to-work law also passed in Missouri in 2017 but failed at the ballot box in a veto referendum in August 2018. The Protecting the Right to Organize Act, which would ease paths to unionization and ban state right-to-work legislation, passed the U.S. House on a party-line vote Tuesday.

Until now, there has not been a single state in which Republicans control the legislature and governorship where right-to-work legislation has made it out of committee and then failed to pass.

The Montana labor movement didn’t just stop the right-to-work bill, it also halted a “paycheck deception” bill that would have banned automatic dues deductions for unions in the public sector, potentially damaging the unions by forcing them to collect dues by hand, a much more time-consuming process. Unions fight these measures in both the private and public spheres because they can create a downward spiral in which management successfully pressures more and more members to quit the union, reducing its power.

“From our perspective, being able to stop virtually every bill that attacks collective bargaining is an unbelievable victory,” said Al Ekblad, executive secretary of the Montana AFL-CIO. “That’s what we have been working towards for 10 years here in Montana.” Protesters hold signs with messages against right-to-work legislation in Helena, Mont., on March 2, 2021.

While Republicans have controlled both houses of the Montana Legislature since 2009, the state had Democratic governors from 2005 until the 2020 elections, when former U.S. Rep. Greg Gianforte, made famous by shoving a reporter in 2017, was elected governor. The Intercept reported in November that a draft priority list had been circulating in the Legislature which included rollbacks of workers’ rights, including right-to-work and paycheck deception legislation and an attack on Montana’s unique status as a state that requires employers to have just cause for terminating workers.

Amanda Curtis, president of the Montana Federation of Public Employees, the state’s largest union with 25,000 members, said that the Republican landslide in the state in November triggered thousands of her members to get involved.

“After the November election results, we knew we would be in hot water,” said Curtis. “We started meeting with labor leaders in Iowa and Wisconsin” — Iowa passed a paycheck deception attack on public sector unions in 2017 — “and we asked them, ‘What do you wish you would have done?’ They really laid out the bills that passed in their states and what they wished they had done differently.”

The day after the election, Curtis said, she sent out an email to her membership, asking if they were ready to fight. “We got so many responses to that email, with 2,637 members of MFPE participating. They’re meeting every other week; they break out by region so people can talk about their interactions with legislators. It’s just been overwhelming.”

“Around the rest of the country, the idea that we could defeat through legislative process was hard to believe. Even within [the AFL-CIO] … there was a sense we were being naive.”

Ekblad credits labor’s win in Montana to their ability to work with Republicans. In the House, the right-to-work bill was defeated on March 2 by a landslide 62-38 vote, while the paycheck deception bill went down in the Montana Senate by a 28-22 vote. (Republicans hold a 67-to-33 majority in the Montana House and a 31-to-19 majority in the Montana Senate.) “If we hadn’t been able to work with Republicans, we would have lost,” said Ekblad. “Around the rest of the country, the idea that we could defeat through legislative process was hard to believe. Even within [the AFL-CIO] … there was a sense we were being naive.” There are several Republican union members in the state Legislature, and unions have actively worked in GOP primaries to support pro-labor candidates.

State Rep. Derek Harvey of Butte, a union firefighter, agreed. “We had to work across the aisle with moderate Republicans to make it a priority that whatever happens, this bill needs to die,” he said. “We built great relationships, and labor folks were relentless, sending emails and pressuring the Legislature. I’ve been averaging 100 messages a day personally.” Thousands of calls in total were made to the Legislature, according to the Montana AFL-CIO.

A key component of their success, Harvey concluded, was that “labor was standing strong, not having the public-private sector division. In Wisconsin, [then-Gov. Scott] Walker tried to separate out the police and fire unions. In Montana, knowing that history, we vowed that labor is labor in the state of MT and we’re all going to stand together.”

Unions under the umbrella of the state AFL-CIO made the decision to flood the Capitol when the Legislature voted, with 300 to 400 members showing up. “With Covid, we haven’t seen a lot of the public at the Capitol. It was really a gamble,” said Harvey. “When people are literally fighting for their livelihoods it really makes an impact. Making representatives walk past all these workers. It was really powerful that day. That was by far the biggest group we’ve seen in the Capitol this session.”