Over the past two months, two scandals have subsumed the administration of New York Gov. Andrew Cuomo: the state’s gross mishandling of the coronavirus pandemic, especially in the state’s nursing homes, and the governor’s reported harassment of several women around him. But the state attorney general has launched a formal investigation into only one of those scandals.

In January, New Yorkers were shocked to learn that the actual Covid-19 death tolls in the state’s nursing homes were as much as 50 percent higher than what had previously been disclosed. The misreporting, which was revealed in a report released by New York Attorney General Tish James on January 28, meant that thousands of deaths may have gone uncounted. And many of these deaths occurred in the early days of the pandemic, as Cuomo told hospitals to send coronavirus-positive patients back to the facilities, leading to rapid spread of the virus.

That scandal gained legs in February when the top aide to the governor, Melissa DeRosa, said that the misreporting was deliberate; Cuomo’s office wanted to throw off an investigation into the state’s handling of nursing homes. “We were in a position where we weren’t sure if what we were going to give to the Department of Justice, or what we give to you guys, and what we start saying, was going to be used against us and we weren’t sure if there was going to be an investigation,” she said on a conference call with Democratic legislators.

But the spotlight quickly turned to a second scandal, as eight women reported inappropriate behavior and sexual harassment by the governor. The sexual harassment allegations, which have attracted the bulk of media coverage, prompted an investigation into Cuomo by James, by referral from Cuomo himself. And many of the top Democrats in the state have called for Cuomo’s resignation.

James has not, however, begun an investigation into the Cuomo administration on its actions last spring, for a bureaucratic reason: She needs a referral from either Cuomo himself or Tom DiNapoli, the state’s low-profile comptroller, who has served since 2007. James has the statutory authority to investigate nursing homes, hence the January 28 report. She does not have the statutory authority to launch an investigation with subpoena power into the Cuomo administration without DiNapoli’s referral. (Theoretically, James could decline to investigate Cuomo’s handling of the nursing home crisis even if she received the referral from DiNapoli, though that seems very unlikely given her willingness to investigate the issue so far.)

A nursing home investigation has the potential to be explosive for a much broader range of actors than just Cuomo, and DiNapoli is himself considering a run for governor. While DiNapoli, a mainstream Democrat who nonetheless has occasionally clashed with Cuomo, is among the Democratic politicians calling for Cuomo’s resignation over sexual harassment claims, so far his office has declined to make a referral. Most of the leading Democrats calling for his resignation have not specifically referred to the nursing home scandal, with a notable exception being powerful state Senate Majority Leader Andrea Stewart-Cousins, a longtime Cuomo foil who assailed his “loss of credibility surrounding the Covid-19 nursing home data” in addition to “allegations about sexual harassment.”

Families of nursing home victims in New York have organized into a group called VoicesForSeniors, which counts over 4,000 members on Facebook. They have petitioned DiNapoli to immediately provide the referral. “We are not merely sad,” they wrote to DiNapoli on March 19. “We are also angry. We demand justice and accountability, and so we write to you to ask for help,” and they urged DiNapoli to “make this referral immediately.” DiNapoli’s office did not respond to a request for comment from The Intercept but told the New York Post that VoicesForSeniors’ letter was “under review.”

“Tom DiNapoli has oversight and investigative power over just about all of state government operations,” said attorney Michael Kink, executive director of the union-backed Strong Economy for All Coalition. “DiNapoli has used that power in the past to do in-depth investigations and to make referrals to the attorney general when there were instances of serious misconduct or possible violations of civil and criminal law. In the cover-up of nursing home data, it appears that there may have been multiple layers of misconduct.” 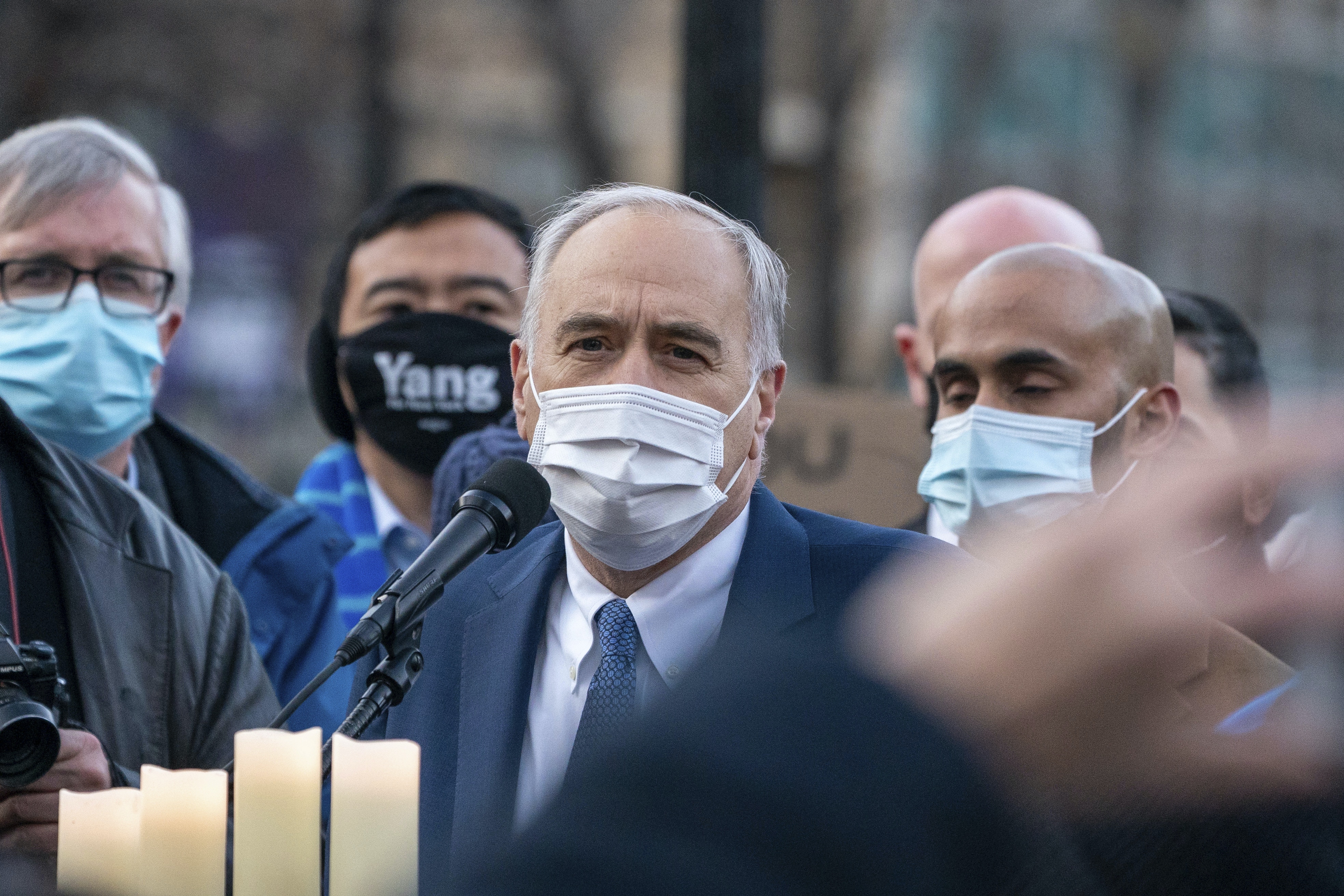 On March 25, 2020, Cuomo’s Department of Health issued an order that said, “No resident shall be denied re-admission or admission to the NH [nursing home] solely based on a confirmed or suspected diagnosis of COVID-19. NHs are prohibited from requiring a hospitalized resident who is determined medically stable to be tested for COVID-19 prior to admission or readmission.”

The decision was later panned by medical experts as having significantly accelerated the spread of the coronavirus in nursing homes, leading to thousands of deaths. “They really need to own the fact that they made a mistake, that it was never right to send Covid patients into nursing homes and that people died because of it,” Dr. Michael Wasserman, president of the California Association of Long Term Care Medicine, told the Associated Press in July.

Then, one week later, on April 3, Cuomo signed into law a budget that contained sweeping immunity legislation for the nursing home industry. The immunity, which was fully repealed by the New York Legislature this week, became a blueprint for at least 25 states that have restricted lawsuits against nursing home operators for coronavirus-related malfeasance.

“They really need to own the fact that they made a mistake, that it was never right to send Covid patients into nursing homes and that people died because of it.”

Many actors benefited from the immunity provision. LeadingAge New York, a trade association for nursing homes, told the Wall Street Journal that it had requested the provision. Anonymous sources quoted by the Wall Street Journal said that the powerful Greater New York Hospital Association did not lobby for the nursing home provision, but the association bragged in an April 2 press release flagged by the Daily Poster that the immunity provision, which it “drafted,” included “nursing homes.” The Greater New York Hospital Association has donated over $1 million to pro-Cuomo committees since 2018, the Daily Poster has reported. GNYHA has also retained DeRosa’s father, Giorgio DeRosa, as a highly-compensated lobbyist.

Local news site Fingerlakes1 has reported that LeadingAge’s lobbying firm, Hinman Straub, which also lobbies for one of the state’s largest nursing home operators, had indirectly supported Cuomo through their principal’s PAC, which has donated $172,000 to Cuomo since 2008.

Cuomo rescinded the March 25 order in May. By July, there were serious questions about it and how it had contributed to the Covid-19 crisis in the state’s nursing homes. The administration released a report that justified the March 25 order but omitted the total number of nursing home deaths, which, by June, was 9,000. The number that was being publicly used by the Cuomo administration at the time was one-third lower. At that time, it was publicly known that the New York numbers were artificially lower because Cuomo excluded nursing home Covid-19 patients who died in hospitals, in contradistinction to every other state.

On August 26, the Justice Department also requested the state’s nursing home data. In the conference call with Democratic legislators in February, DeRosa revealed the Cuomo administration’s response: “Basically, we froze,” she said, fearing the politicized scrutiny of the Trump administration.

A full spectrum investigation by James into the Cuomo administration’s handling of the nursing home crisis could expose a much broader set of powerful actors in the state — actors that DiNapoli, who is considering a run for governor, would confront by making the referral demanded by the families of nursing home Covid-19 victims. “I would imagine that [the lobby groups] don’t want any more investigations into their potential pay to play schemes,” said New York Assembly Member Ron Kim, a Democrat. “The timeline proves [pay to play] may have happened around corporate immunity.”

DiNapoli is a traditional Democratic politician in the state. A former longtime member of the state assembly, he was handpicked by now-disgraced, then-state Assembly Speaker Sheldon Silver in 2007 to replace Alan Hevesi, who was forced out after several scandals, one of which was pay to play at the state’s pension fund. DiNapoli is close to organized labor and has been endorsed by the Working Families Party, but he has also received over $52,000 from the same Hinman Straub PAC, State Street Associates, that donated $172,000 to Cuomo. DiNapoli has occasionally clashed with the Cuomo administration, mostly over tax and budget issues, but has for the most part declined to confront the notoriously vindictive governor head-on.

Making the referral to the attorney general on the nursing home issue is an entirely different proposition for DiNapoli than calling for Cuomo’s resignation. One proposition involves confronting a powerful governor, but one who had already been abandoned by other leading Democrats. The other means confronting Cuomo as well as powerful lobbies and donors that DiNapoli could want to draw on for support as he plots a gubernatorial run.

Kink, a longtime critic of Cuomo, said he trusts DiNapoli to make the referral requested by the families. “I honestly think that DiNapoli has shown that he wants government to work well for regular people,” he said. “DiNapoli has a track record of caring that things are being done well and effectively. If there are violations of law, any whiff of corruption or malfeasance in government operation, he’s generally been pretty tough about that. … It’s absolutely ripe for an investigation and absolutely ripe for a referral.”

“I don’t know why the families have had to fight so hard to compete with sexual harassment allegations. This story is five 9/11s.”

“We need to know how the governor misused state resources” during the pandemic, said Kim, the assembly member. “We found that there are accusations around him using state resources to treat his own family members and closest allies with testing and treatment of Covid. As it falls under public misuse of funds, the comptroller as chief auditor has a critical role in getting to the truth.”

Vivian Zayas, a co-founder of VoicesForSeniors whose mother died of Covid-19 in a nursing home a year ago, said that Cuomo’s actions exacerbated the impact on residents like her mom. “Covid had started to creep into facilities” due to community spread, said Zayas. “Cuomo exacerbated it and lit the match.”

“I don’t know why the families have had to fight so hard to compete with sexual harassment allegations,” Zayas continued. “This story is five 9/11s.”