The fact that Raoul Peck’s new HBO film on white supremacy exists shows that something profound about the world is changing. In the final episode of Raoul Peck’s HBO documentary, “Exterminate All the Brutes,” Peck says in a voice-over, “The very existence of this film is a miracle.”

That is 100 percent true. Before this moment in history, it would have been impossible to imagine that one of the world’s largest corporations — AT&T, owner of HBO, with a current market cap of $220 billion — would have funded and broadcast a film like this. The fact that it somehow squeezed through the cracks and onto our TVs and laptop screens demonstrates that something profound about the world is changing. Decades, centuries of people fighting and dying were required both to widen the cracks and mold someone like Peck, the right human at the right time, to step through.

“Exterminate All the Brutes” is a sprawling disquisition — four episodes, each an hour long — into the invention and consequences of 500 years of “white” supremacy, presented via a high-gloss pastiche of old footage, newly filmed dramatizations, and clips from Hollywood movies. “White” needs scare quotes because the film makes clear that whiteness is not something that exists in reality — like, say, the moon — that is right there whether we believe in it or not. Instead, it’s something imaginary that we’ve somehow all agreed on, like pieces of paper having value.

These two made-up concepts meet in the $100 bill via the man on its face, Benjamin Franklin. In 1751, Franklin wrote an essay that makes clear that anyone can be classified as “white” or read out of the white race, depending on the needs of the moment.

Franklin was desperate to keep the British colonies “white,” but by white, he didn’t mean European. For Franklin, only the English and Saxons counted. Germans, Swedes, Russians, and the French were hilariously “swarthy,” and thus “will never adopt our Language or Customs, any more than they can acquire our Complexion.”

At the same time, as the miniseries illustrates, the English were colonizing Ireland and demoting its nearly translucent inhabitants to nonwhite. A famous British clergyman named Charles Kingsley, extremely liberal by the standards of the day, wrote home from a trip to Sligo that the people somehow had skin “as white as ours” but nevertheless were subhuman “chimpanzees.” In the U.S., the Irish were the standard by which nonwhiteness was measured, to the extent that African Americans were sometimes referred to as “smoked Irish.”

Of course, America eventually promoted the Irish to white, on the condition that they would be team players. Across the world in South Africa, the apartheid regime decided that Japanese immigrants were loyal enough to be “honorary whites.” The sorting process can even be seen in real time in a 1949 Atlantic article by a friend of Franklin D. Roosevelt about his trip to the newly born Israel. The country, he explained, could be useful as “the best guarantee” for Western interests in the area. Jewish people, who had previously been “moth-eaten” and “grease-spotted,” now possessed “physical beauty, healthy vitality, politeness, good nature” and were comparable to Thomas Jefferson. Arab people were in the way but “about as dangerous as so many North American Indians,” and therefore nonwhite and “foul, diseased, smelling, rotting, and pullulating with vermin.” 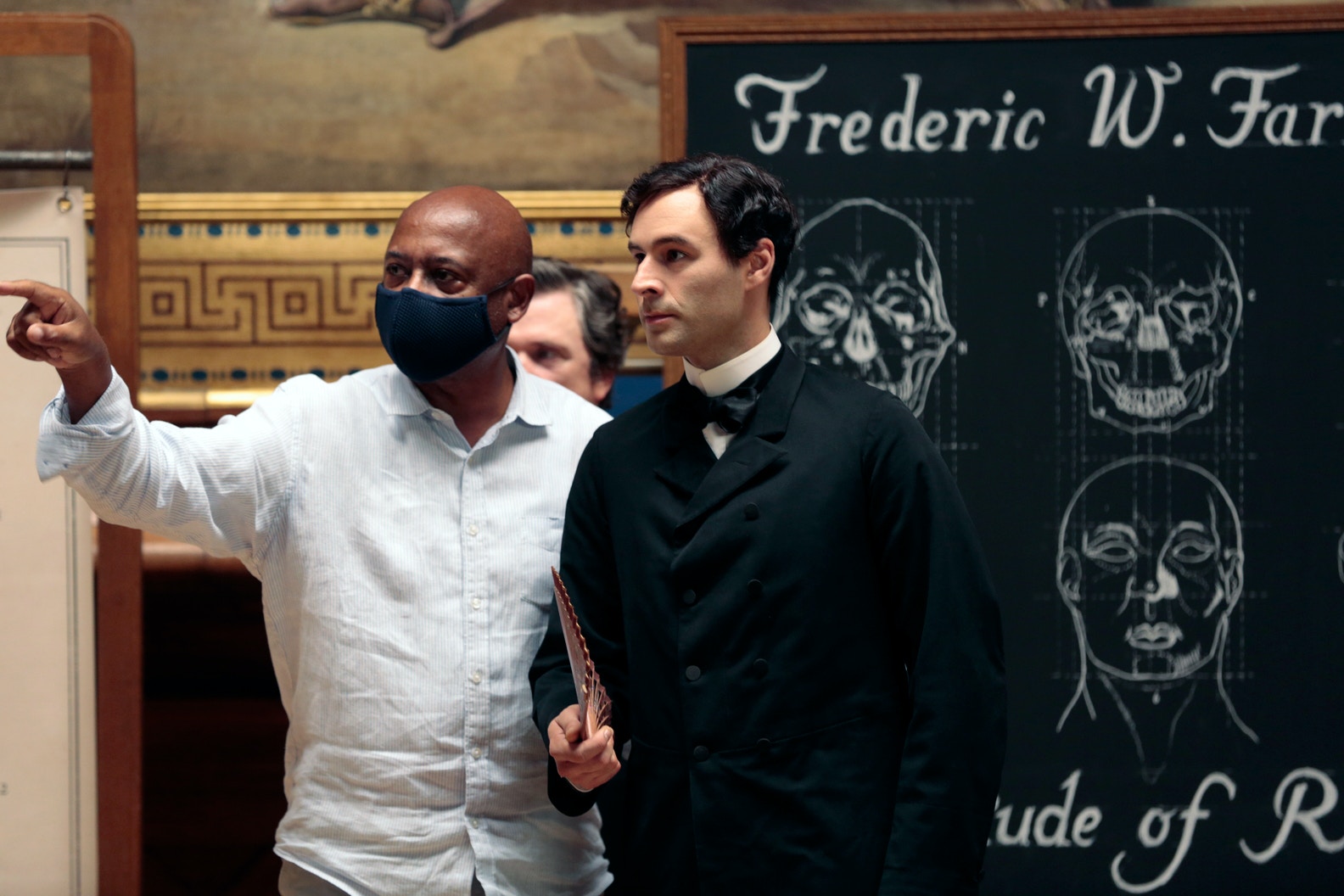 Peck may be only the filmmaker who would want to take on this gigantic subject and then manage to present it as is, simultaneously terrifying and preposterous. Born in Haiti — i.e., the western half of Hispaniola, the island where Columbus landed in the “New” World — Peck has lived all over the planet and has a humanistic sympathy for all people, both at their best and their absolute worst. He’s made several dozen films, many documentaries, and was nominated for an Oscar in 2017 for “I Am Not Your Negro,” about James Baldwin.

At the outset, Peck says, “This is a story, not a contribution to historical research,” and he knows what he’s doing as a storyteller. Every minute of the miniseries has startling moments that examine the story of Europe’s colonization of the world from the other end of the gun — or, by this point, the other end of a Predator drone’s AN/AAS-52 Multi-Spectral Targeting System. Manifest Destiny, the White Man’s Burden, France’s Mission civilisatrice, Spain’s Misión civilizadora, Portugal’s Missão civilizadora — all are reframed so they can be seen as the code words they were.

Peck also does a masterful job excavating how this idea was birthed. It wasn’t that Europeans decided that they were superior to the rest of the world’s people and therefore had to conquer them. It was the other way around: The rest of the world had the land and gold that Europe coveted, and so, over hundreds of years, Europeans developed a jerry-rigged justification for how stealing it all was okay and indeed praiseworthy.

“Exterminate All the Brutes” borrows its title from a famous line in “Heart of Darkness,” the 1899 novel by Joseph Conrad about the colonizing of Congo. (Moviegoers may be more familiar with “Apocalypse Now,” an adaptation of the book with the location switched to Vietnam.) At one point, the narrator, Marlow, explains why there had to be some kind of reason for the rapine and plunder:

It was just robbery with violence, aggravated murder on a great scale … the conquest of the earth, which mostly means the taking it away from those who have a different complexion or slightly flatter noses than ourselves, is not a pretty thing when you look into it too much. What redeems it is the idea only. An idea at the back of it; not a sentimental pretense but an idea; and an unselfish belief in the idea — something you can set up, and bow down before, and offer a sacrifice to …

A report by the upriver colonial agent and mass murderer Mr. Kurtz makes clear what this means in practice. Kurtz begins by declaring, “By the simple exercise of our will we can exert a power for good practically unbounded,” and quickly degenerates into an exhortation to “exterminate all the brutes!”

This was not some oversimplification written to make a tendentious point but instead an exact depiction of reality, then and now. Trent Lott, the Senate minority leader at the start of the Iraq War in 2003, initially asked for prayers for the U.S. military “as they engage in an intense but noble battle … We went in there to free those people.” Six months later he mused, “If we have to, we just mow the whole place down, see what happens.”

The series jumps around in time to examine a seemingly endless number of genocides — some that may be hazily remembered today, many that are totally forgotten. But Peck’s purpose is not just to make a list of atrocities. Rather, he is arguing a case that culminates in the film’s exceedingly disturbing last 20 minutes.

The Holocaust, Peck shows, was not an inexplicable outburst of madness, unconnected to the rest of history. It was instead the logical culmination of the ideology of European colonialism and white supremacy. “When what had been done in the heart of darkness was repeated in the heart of Europe, no one wished to recognize what everyone knew,” he says. “Auschwitz is the modern industrial application of established extermination methods.”

That’s where “Exterminate All the Brutes” leaves us. It does not offer any solutions or false hope. In fact, after watching it, it’s hard not to consider that whiteness is a demonic whirlwind that may end by destroying everyone — starting with its traditional victims but eventually engulfing people who thought that their whiteness would protect them and are in for a big surprise.

On the other hand, there is the miracle of the documentary’s existence. That by itself means that deep tectonic plates are shifting in the world’s consciousness. It’s not impossible that this film will someday be considered a key part of a long, complex, messy reckoning that will see whiteness relegated to humanity’s Museum of Terrible Ideas. If people have a future, it will be one in which tourists come and gape in horror that anyone ever thought this awful concept made sense.