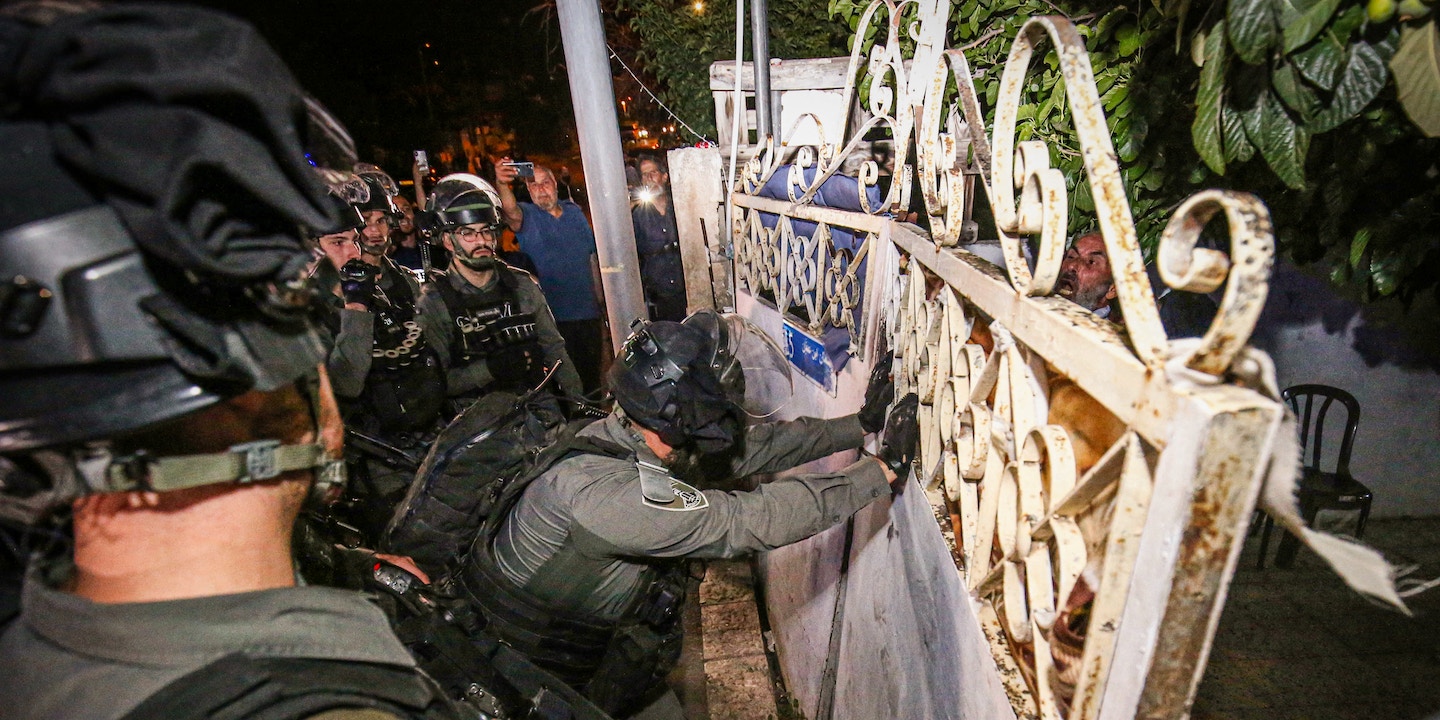 On May 6, right-wing Israeli officials descended on Sheikh Jarrah, a neighborhood in occupied East Jerusalem, to show their support for the settler movement’s push to displace Palestinian residents and take their homes.

One of the officials was Aryeh King, a deputy mayor of Jerusalem and settler who lives in the Palestinian neighborhood of Ras al-Amud. In an exchange caught on camera, King mocked Palestinian activist Mohammed Abu Hummus for being shot by Israeli forces in his backside, and then, pointing at his head, said, “It’s a pity it didn’t go in here.” It was a wish for the death of a Palestinian.

The remarks turned a spotlight on King’s involvement in the saga of Sheikh Jarrah, the Palestinian neighborhood targeted by Israeli settlers that is at the heart of the current crisis in Israel-Palestine. The impending removal of Palestinian families from Sheikh Jarrah fueled tensions in Jerusalem, which spiraled out of the holy city into Gaza and the rest of Israel-Palestine. Israeli airstrikes are now blanketing Gaza, with Palestinian groups firing rockets back; both Jewish and Palestinian mobs are roaming cities in Israel, beating up whoever they can find.

King is one of the players, among others, who has stoked tensions in Sheikh Jarrah, the site of a long-simmering crisis. In 2007, King started the Israel Land Fund, and since then, the group has worked to buy land in Palestinian neighborhoods throughout occupied East Jerusalem to sell to Jewish settlers.

“That American organizations are taking advantage of so-called charitable designation to perpetrate violence on the ground and a situation of apartheid in the West Bank goes contrary to the basic principles laid out in the U.S. Tax Code.”

The Central Fund of Israel is among a network of U.S.-based groups fueling dispossession and displacement of Palestinians from neighborhoods in Jerusalem to make way for Jewish settlers. The groups’ tax-exempt nonprofit status means their donors receive an effective U.S. government subsidy to bolster the settlement moment — in contradiction of the Biden administration’s policy against the land takeovers, which are widely considered to be a gross violation of international law.

“Organizations like the ILF are part of a much broader scheme involving the transfer of millions of dollars via U.S. private foundations like CFI to Israeli organizations that together, along with the Israeli state, constitute the illegal Israeli settlement enterprise,” said Diala Shamas, a staff attorney with the Center for Constitutional Rights. “That American organizations are taking advantage of so-called charitable designation to perpetrate violence on the ground and a situation of apartheid in the West Bank goes contrary to the basic principles laid out in the U.S. Tax Code, and other provisions of U.S. law.”

Reached by phone on the number listed on the Central Fund of Israel’s website, a man who refused to give his name declined to comment on the group’s activities, saying, “My history with journalists has been so horrible. I’m not interested.” An Israel Land Fund spokesperson said, “ILF is not involved in any illegal act.” The spokesperson told The Intercept that the group is “not involved so much” in Sheikh Jarrah.

The Israel Land Fund assisted in the eviction of a Palestinian family in Sheikh Jarrah in 2017, and King openly advertises that one of his major targets is the neighborhood. “In about 10 years we will have in [Sheikh Jarrah], some 400, maybe 500 Jewish families,” King told the Jerusalem Post in 2017. The Israel Land Fund advertises “residential plots” in what the group calls “Nahalot Shimon,” the Hebrew name given to parts of Sheikh Jarrah. The fund also notes that Palestinians — “Arabs” in the settlers’ parlance — currently live on the plots they claim are owned by Jews.

Two other Jerusalem neighborhoods, Batan al-Hawa and Al-Bustan, are also facing a wave of eviction orders instigated by U.S. nonprofit-backed settler groups. The Sheikh Jarrah and Al-Bustan eviction plans, which threaten the homes of some 2,000 Palestinians, were condemned as violations of international law by 25 House Democrats in a letter sent to Secretary of State Antony Blinken on Wednesday, calling on the State Department to pressure Israel over the pending forced displacement.

Sheikh Jarrah is key to the Israeli settler movement’s plan to take over neighborhoods in occupied East Jerusalem, as a way to create what King calls “layers” of Jews that would “secure the future of Jerusalem as a Jewish capital for the Jewish people.”

In 1967, Israel conquered East Jerusalem, along with the West Bank and Gaza Strip, in the Six-Day War, beginning the military occupation that continues to this day. Israeli Jewish settlement in East Jerusalem is considered illegal under international law, a violation of the Geneva Conventions that prohibit an occupying power from sending its own citizens to live on occupied land. The U.N. considers Israeli claims of sovereignty over East Jerusalem to be an unlawful annexation.

An international consensus long held that the thorny issue should be resolved through peace talks, but as negotiations have lost momentum in the past decade, several influential nations, including the U.S., have moved toward recognizing Israeli sovereignty. In 2017, President Donald Trump recognized Jerusalem as Israel’s capital, a move long rejected by previous presidents who said that the status of Jerusalem should be subject to negotiation. In 2018, the U.S. moved its embassy to Jerusalem, an act that Palestinians saw as supporting Israeli claims over the entire city, including its occupied eastern half. President Joe Biden has not reversed the embassy move.

For the settler movement, implanting more settlers in East Jerusalem is part of a push to consolidate Jewish demographic dominance over Palestinians, cement Israeli control over the entirety of Jerusalem, and kill the diminishing chances for a Palestinian state with a capital in Jerusalem, a central Palestinian demand.

“Just imagine yourself sitting in your home and a company comes out of nowhere whose only mission is to kick native people out and bring in settlers.”

Since 1972, Israeli settlers have used Israel’s court system to target Sheikh Jarrah. The settlers say that the original owners of the land are Jews who sold the land to them. In making their eviction claims, they rely on a law that allows Jews who owned property before 1948, the year Israel was founded, to reclaim their homes.

Palestinians and their advocates point to the discriminatory nature of the law: Palestinians who lost property in 1948, when Israeli forces expelled 750,000 from their homes as part of the founding of Israel, cannot reclaim lost homes. The Palestinians who live in Sheikh Jarrah are refugees from the 1948 war, given their homes by the Jordanian government, which controlled the area until 1967, and UNRWA, the U.N. agency for Palestinian refugees.

“Just imagine yourself sitting in your home and a company comes out of nowhere whose only mission is to kick native people out and bring in settlers,” said Rasha Budeiri, a Palestinian from Sheikh Jarrah whose family is under threat of forced displacement. “We’ve built memories there. That’s the house my mom grew up in and got married in. It shouldn’t be acceptable. Someone should stop it.” Israeli border guards protect a house decorated with the Star of David and an Israeli flag, in front of which Israeli member of Knesset (MK) Itamar Ben-Gvir of the Jewish Power (Otzma Yehudit) party has set up a makeshift “MK office,” in the Sheikh Jarrah neighborhood of Israeli-annexed East Jerusalem on May 6, 2021.

The organization behind the targeting of eight Palestinian families in Sheikh Jarrah is a U.S.-registered real estate firm by the name of Nahalot Shimon. Though the Israel Land Fund is not linked to the current round of evictions, King is loudly advocating for it because it will help his dream of turning Sheikh Jarrah into a Palestinian-free, Jewish-only settlement. In 2017, King’s organization helped evict eight members of the Shamasneh family from their home in Sheikh Jarrah. The Israel Land Fund contacted the heir of what the courts said were the original Jewish owners and represented her in legal proceedings to kick the family out.

The Central Fund of Israel, the main funder of King’s group, is a New York-registered nonprofit run by Jay Marcus, the owner of a textile company, that takes in millions of dollars every year from donors who get to write off the checks as tax deductions. Since 2011, the CFI has given the Israel Land Fund over $720,000 for its settlement activities, according to documents filed to Israeli regulators and reviewed by The Intercept. In 2017, the Central Fund of Israel’s donation constituted 99.2 percent of the Israel Land Fund’s total budget.

Such arrangements between U.S. nonprofit groups and Israeli settler organizations are not uncommon. Two miles to the south of Sheikh Jarrah lie the Silwan neighborhoods of Batan Al-Hawa and Al-Bustan, which are both in the crosshairs of Israeli settlers. In November 2020, an Israeli court ruled in favor of Israeli settler group Ateret Cohanim’s request to displace 87 Palestinians from their homes in Batan al-Hawa. Ateret Cohanim is backed by the U.S.-based American Friends of Ateret Cohanim, which delivers tax-deductible donations to the settler group. According to the site Charity Navigator, which tracks such groups, in September 2020 the Internal Revenue Service automatically revoked the American Friends’ tax-exempt status because the group failed to file documents with the U.S. government. In 2017, the last year records are available, the group gave its settler counterparts over $525,000.

And in Al-Bustan, 88 Palestinian homes are facing demolition orders to make way for archaeological attractions mean to showcase the ancient Jewish link to the area. The group instigating the demolitions is Elad, an Israeli settler group, which in turn is funded in part by Friends of Ir David, a U.S.-based nonprofit. Friends of Ir David gave $36 million to the Israeli group between 2006 to 2013, according to Haaretz.

“They depend on their donors’ money,” said Hagit Ofran, the director of the Israeli group Peace Now’s Settlement Watch. “Without the donors’ money, there’s no settlement in East Jerusalem.”

The leading role U.S. charities play in the displacement of Palestinians has prompted Palestinian rights advocates to call for increased scrutiny of the nonprofits.

“This isn’t about what we think is morally or ethically right or wrong. It’s about the simple proposition that Americans — through these so-called charities — cannot directly support, or aid and abet, unlawful activities regardless of where they occur,” said Shamas, the Center for Constitutional Rights staff attorney. “Members of Congress should call on the Department of State and the IRS to investigate these groups, and at the very least, not grant them the privilege of tax-deductible status.”