The end of the property tax exemption came as one of a series of blows heralding new public pushback against fossil fuels. 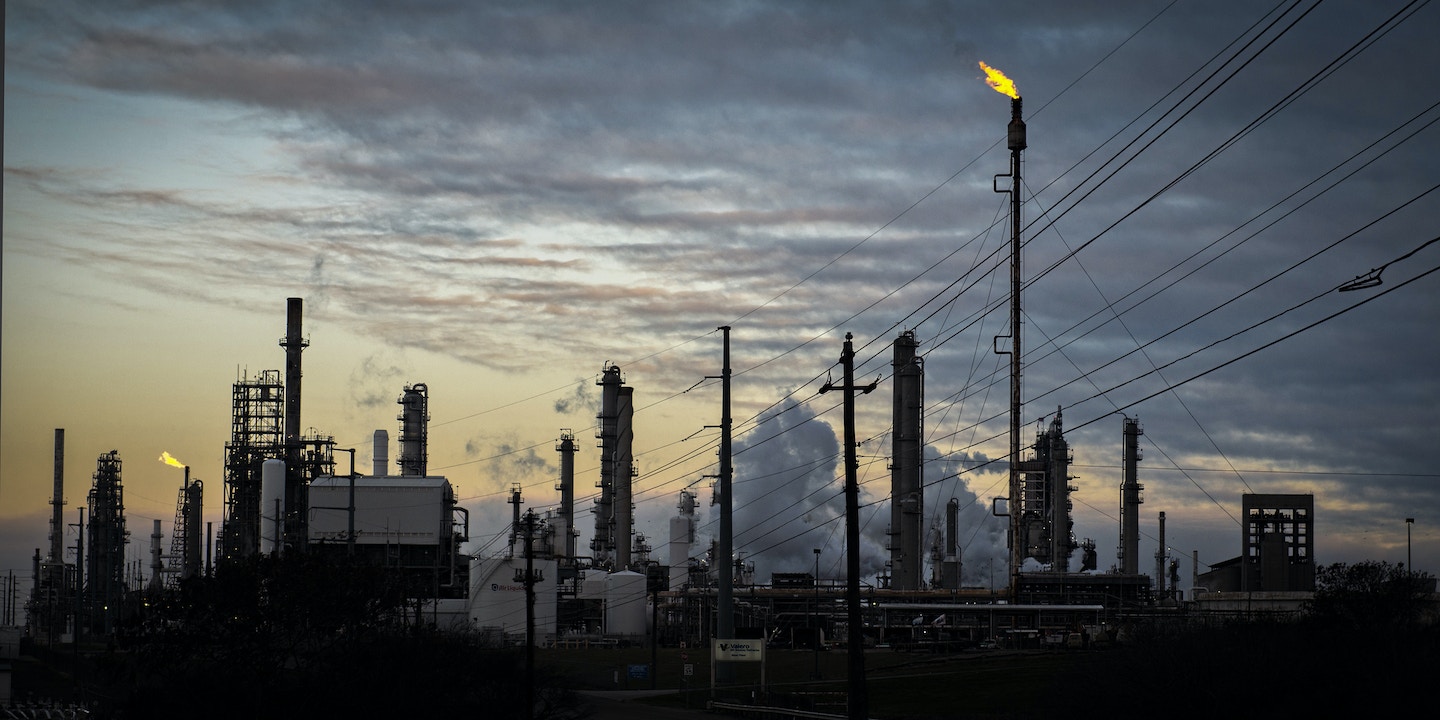 When organizers set out to overturn Texas’s giveaway program for the oil and gas industry, they had a long game in mind. Over 20 years, the tax exemption program known as Chapter 313 had delivered $10 billion in tax cuts to corporations operating in Texas — with petrochemical firms being the biggest winners. This year, for the first time in a decade, the program was up for reauthorization. Organizers decided to challenge it for the first time.

At the beginning of last week, as Texas’s biennial legislative session approached its end, the aims of organizers remained modest. “We thought it would be a victory if the two-year reauthorization passed so we could organize in interim,” said Doug Greco, the lead organizer for Central Texas Interfaith, one of the organizations fighting to end the subsidy program.

At 4 a.m. last Thursday, it became clear that something unexpected was happening: The deadline for reauthorization passed. “The bill never came up,” Greco told The Intercept. Organizers stayed vigilant until the legislative session officially closed on Monday at midnight, but the reauthorization did not materialize.

The lapse in authorization coincided with three other groundbreaking blows to oil and gas corporations. A Dutch court ruled that Shell Oil is liable for its climate impacts and must reduce its greenhouse gas emissions. Exxon Mobil shareholders booted out two members of the corporation’s board of directors for its failures on the climate crisis. And Chevron shareholders voted to force the company to cut its emissions.

With all four developments coming on the same day, the failure to reauthorize the subsidies in Texas fell under the radar. Taken together, the moves demonstrate changing opinions about climate change and fossil fuel companies; one analyst referred to the news about Shell, Exxon, and Chevron as “the start of a new era for Big Oil.” Between the court decisions, shareholder activism, and the unwillingness of Texas legislators to continue unpopular handouts to oil companies, the public may no longer be willing to go along with business as usual for fossil fuel firms.

“People aren’t persuaded by the dogma anymore that tax breaks create jobs. Too many people see that the emperor doesn’t have clothes anymore,” said Greg LeRoy, executive director of Good Jobs First, which tracks corporate subsidies. “These extractive industries have been extractive of the tax base too. People realize it’s too corrosive.”

The Texas Chapter 313 defeat is the second recent win against multibillion-dollar oil and gas industry subsidies in fossil fuel states. Last fall, organizers in Louisiana beat back a ballot initiative designed to counteract dramatic reforms to the state’s industry giveaway program. In a state that leans heavily Republican, people voted down the constitutional amendment by a landslide.

Broderick Bagert, who helped organize the Louisiana effort, sees what happened in Texas as part of a turning of the tides in a region where industry has long ruled. “In a lot of cases, it’s not that these battles have been lost — they just haven’t been fought,” he said. “What you’re seeing for the first time is the battles being fought.”

“These extractive industries have been extractive of the tax base too. People realize it’s too corrosive.”

He said the politics of the problem are simple: “It stinks to have the most powerful and wealthy institutions in our country and in our world get special deals that ordinary people don’t get. As soon as it’s crafted in that kind of way, suddenly politics that seemed impossible to resist crumble and change right before your eyes.”

Bagert noted that Louisiana and Texas are two of a handful of states whose industries will decide what our climate future will look like. “The question of these subsidies is being tied more and more with the question of whether these changes in energy production that we need to save the planet are going to be made in time to save the planet,” he said. “It all boils down to the price of energy. Once industries have to bear the full cost of their production, including emissions and taxes and all the other things that have been subsidized, then it’s no longer advantageous, and that’s when things start happening.”

Texas’s Chapter 313 program allowed corporations building new facilities to apply to local school boards for a property tax waiver. The school boards hardly ever said no — likely because the local school district didn’t stand to lose money. Instead, the property tax money that was waived would have gone into a state fund, which should have especially benefitted overstretched urban school districts. An analysis by Central Texas Interfaith found these urban districts to be the biggest losers: Houston and Dallas school districts have each lost more than $20 million annually from the tax exemptions.

The subsidy program was designed to attract businesses that would not otherwise make their homes in Texas. In deciding approval for waivers, one prerequisite was that the subsidies be a determining factor in whether a company would build in-state. However, an analysis by the Houston Chronicle showed numerous examples of companies, such as the pipeline giant Energy Transfer, announcing a project before even applying for the waiver. And many of the subsidy recipients were doing Texas-specific projects — outgrowths of the state’s fracking boom in the Eagle Ford and Permian shale formations, using Gulf Coast export facilities — so they were unlikely to situate ventures elsewhere if subsidies did not come through.

The program’s returns were also unimpressive. If measured by job creation, the program cost the state at least $211,600 per job, according to a calculation by the Houston Chronicle.

“No one had really questioned this program,” said Greco, of Central Texas Interfaith. The reauthorization was a once-in-a-decade chance to challenge it. “We knew in our guts that the program was just a blank check, but we also are very sober about the realities of the Texas legislature.”

In Texas, the legislative sessions last only five months, every two years. The clock was ticking.

An unlikely coalition that emerged from across the political spectrum — including the right-wing Texas Public Policy Foundation, the progressive Every Texan, and Greco’s group, which does nonpartisan political work among religious groups — began to organize against the subsidy.

When the session started, the bills on the table included one that would have not only offered another 10 years of exemptions, but also would have expanded the program to provide waivers for repairs and modernization to facilities already operating. By the time a subsidy bill passed the house, organizers had whittled it down to a two-year reauthorization. In the Senate, oil and gas lobbyists were aiming to bump it to three years, which would take them into the next legislative session.

As legislators met in a closed session to hammer out the bill, Greco heard from a colleague. “One of my organizers said there’s 20 oil and gas lobbyist standing outside this committee room,” he recalled.

“We know there’s going to be a big conversation over the interim — we are under no illusions that this is not going to be a long-term battle.”

Former Gov. Rick Perry, an Energy Transfer board member, tweeted his support for reauthorization. But as last week of the session ticked by, the bill didn’t come up. “It became clear that the reputation of the program had been damaged,” Greco said.

In 19 months, Texas’s subsidy program will expire, but that doesn’t mean the fight is over. “We know there’s going to be a big conversation over the interim — we are under no illusions that this is not going to be a long-term battle,” Greco said. Organizers, though, recognize that the subsidy’s defeat marks a shift: “The table has been reset.”

Established in the state constitution itself, Louisiana’s Industrial Tax Exemption Program is embedded even more deeply into state policy than Texas’s Chapter 313 and has represented even more of a rubber stamp.

In Louisiana, few regulations encumbered the tax exemptions and the State Board of Commerce and Industry would routinely approve the list of exemption requests “en globo” — all at once — during its meetings.

Organizers, like those of Bagert’s Together Louisiana group, took note that the tax exemptions brought few benefits to the state in terms of jobs. The groups decided the best approach to such an entrenched subsidy was to exploit a loophole that stated the exemptions could only occur “with the approval of the governor.” During John Bel Edwards’s campaign for governor in 2015, Louisiana organizers began to pressure him to withdraw approval. “To our surprise, Bel Edwards moved quickly after being elected,” Bagert said.

The summer after Edwards’s election, he announced that the program would be reformed. Rather than a rubber stamp from the state board, corporations would have to request exemptions from the parish governing bodies, municipal governing bodies, school boards, and sheriffs who would lose the property taxes gifted away in the exemptions.

The oil, gas, and petrochemical industry was blindsided, and lobbyists with the Louisiana Association of Business and Industry, the Louisiana Chemical Association, and the Louisiana Mid-Continent Oil and Gas Association have been fighting against the change since it went into effect. Bagert estimated that a typical legislative session sees 20 to 30 pieces of proposed law attempting to undo the reforms.

“Their efforts to defeat the reforms have mostly lost.”

Just as in Texas, however, the fait accompli of reversing the subsidies has changed the game. Now that some $350 million in new revenue is already streaming into local governments’ coffers, according to Bagert, the subsidy will be politically difficult to reinstate. Voters have repeatedly rebuffed the industry’s efforts. For example, industry groups bet big on the most recent gubernatorial race in 2019, backing Republican Eddie Rispone, but he lost. And a natural gas industry-backed ballot initiative for a new property tax exemption failed among Louisiana voters last fall.

Though the industry has not quit — organizers beat multiple bills this session and are still fighting one that would reduce transparency for the program — organizers note that they’re on better footing. “It’s around the margins,” said Bagert, of the industry pushes. “Their efforts to defeat the reforms have mostly lost.”