Mayoral candidates spoke of stop-and-frisk as a relic of a bygone era, but for many New Yorkers, police stops never really ended. When New York City Mayor Bill de Blasio was running for his job eight years ago, pitching himself as a champion of progressive values and police reformer, he promised to end “a stop-and-frisk era that unfairly targets people of color.”

Last week, as a crowded field of mayoral candidates sparred about public safety and policing during the first in-person forum of this campaign season, the infamous New York Police Department practice was back on the debate stage. Some candidates claimed credit for their role in ending it, while others accused their competitors of wanting to return to the days when officers stopped, questioned, and searched tens of thousands of mostly Black and Latino New Yorkers.

But stop-and-frisk never actually ended, and New Yorkers of color have continued to bear the brunt of it — even last year, when the coronavirus pandemic shut down much of the city and many of its residents stayed home.

Black New Yorkers, who account for 24 percent of the city’s population, accounted for 56 percent of those stopped last year.

As in years past, the majority of stops were concentrated within a handful of police precincts in East New York, the Bronx, and East Harlem — all majority Black, Latino, and poor parts of the city.

“The data on the precincts with the highest number of stops only confirms what New Yorkers of color have been saying all along — predominantly Black and Latinx neighborhoods are policed differently than predominantly white neighborhoods, and stop-and-frisk is no exception,” said Molly Griffard, an attorney with the Legal Aid Society, which analyzed the data. “Anyone who believes stop-and-frisk is over clearly isn’t talking to people who live in these overpoliced neighborhoods that many of our Legal Aid clients call home.”

The NYPD is required to report data on the stops officers make following a landmark federal class-action lawsuit challenging its stop-and-frisk practices. A federal judge ruled in 2013 that the department had engaged in a pattern of racially discriminatory and unconstitutional stops, targeting, at its peak in 2011, nearly 700,000 New Yorkers, 90 percent of them people of color. Only 2 percent of people stopped that year were found in possession of any unlawful items, such as drugs or weapons.

The judge also appointed an independent monitor to oversee the implementation of a broad set of court-mandated reforms that followed the litigation. But while the number of stops in recent years has been a fraction of what it was a decade ago, the monitor has repeatedly warned that stops are severely undercounted — a reality NYPD brass has acknowledged. As The Intercept reported last year, New York police have not only continued to stop and search people, they have also engaged in other potentially unconstitutional practices, like demanding that those stopped turn over their IDs in the absence of probable cause. Because of the way in which the NYPD categorizes different interactions between officers and civilians, many incidents that people effectively experience as police stops do not meet department criteria for reporting. Attorneys looking for an official record of their clients’ interactions with police often find that there is none.

While advocates welcomed the decrease in stops, they cautioned that the number remains too high, particularly in the middle of a pandemic, when unnecessary police interactions exposed both officers and those stopped to needless risk.

Griffard noted that some of the neighborhoods with the most stops were also those most impacted by Covid-19.

“Stop-and-frisk is a tactic that brings officers into close contact with members of the public. You’re definitely within six feet of someone if you’re frisking them,” she said. “It’s alarming that we’re seeing such a high number of stops during a pandemic for many reasons, including that such close contact could spread Covid, and fewer people were outside for much of the year. It raises the question as to why the NYPD is still engaging in this policing tactic that’s been shown not to work during a global pandemic.” 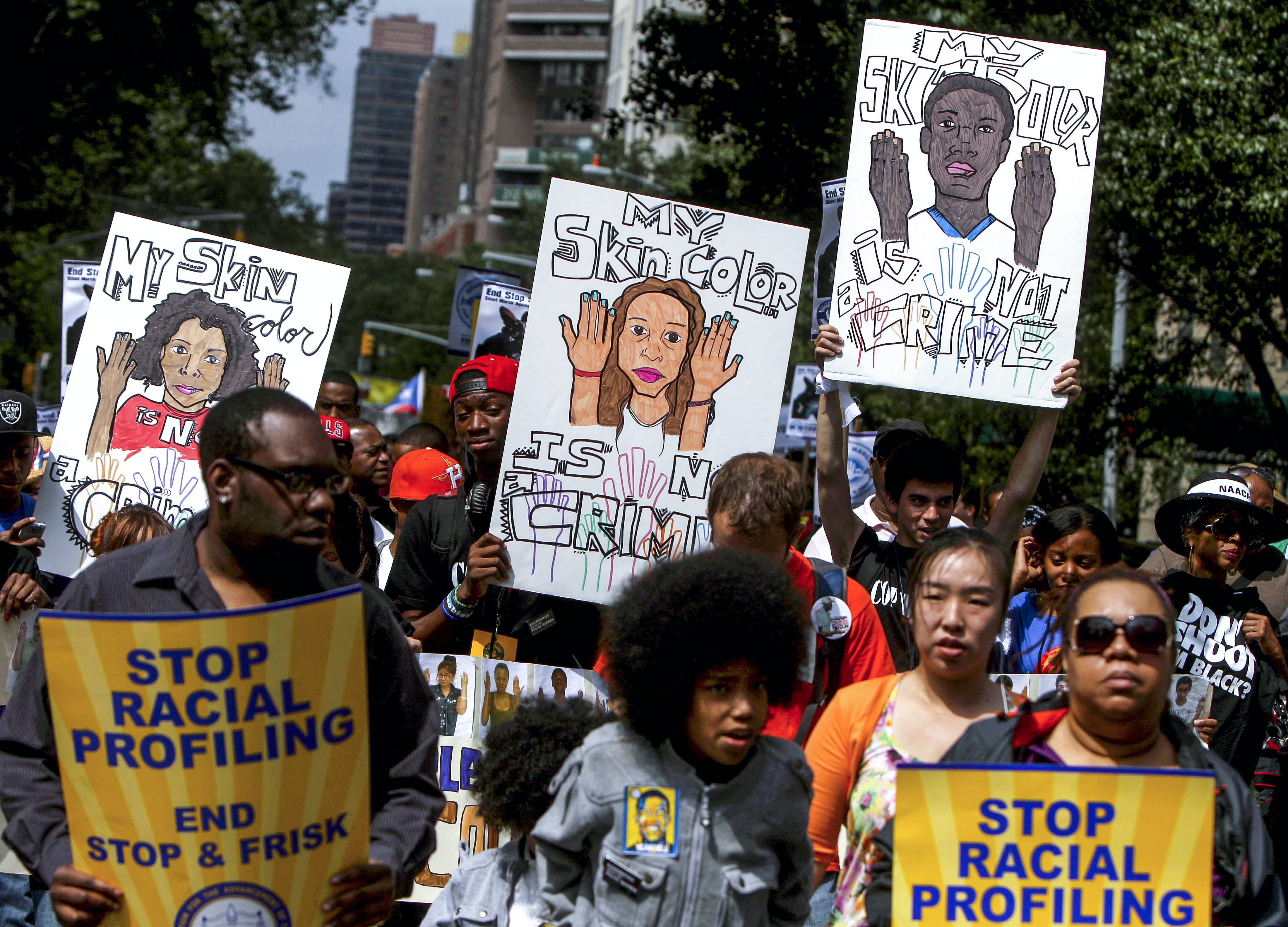 Protestors hold signs during a silent march to end “stop-and-frisk” in New York on June 17, 2012.

“Back to the Giuliani Era”

At last week’s mayoral debate, which included extensive discussions about policing, several candidates were critical of stop-and-frisk. They acknowledged that the practice had caused enormous harm while having little impact on public safety.

Scott Stringer, the city’s comptroller, criticized Eric Adams “and anyone who thinks that the only solution to preventing crime is going back to the [former Mayor Rudy] Giuliani days, with stop-and-frisk and a Republican agenda that put a lot of kids in our criminal justice system,” he said.

Adams, a former cop who testified against abuse of the tactic but also defended the police’s right to use it, snapped back: “I fought against stop-and-frisk for 22 years when I wore a uniform. That’s how New Yorkers know me.”

Candidates also spoke of stop-and-frisk as a relic of a bygone era, rather than an ongoing reality in the lives of many New Yorkers.

“Clearly stop-and-frisk, it didn’t work,” said Ray McGuire, a former banking executive. “Going back to the Giuliani era, stop-and-frisk is not something that works; we need to move forward,” he added, before quipping that the call to defund police also “doesn’t work.”

Maya Wiley, a civil rights attorney, spoke of having “to go to court with my beautiful Black godson because he was riding a skateboard while Black,” she said. “We can’t have stop-and-frisk back.”

At the debate, some mayoral candidates acknowledged the ongoing disparities as well as the disconnect between stop-and-frisk practices and public safety. “Stop-and-frisk is real, and overpolicing in communities of color is very real,” said Stringer. Adams praised de Blasio for reducing the practice while maintaining low crime rates. “He dropped the numbers substantially and kept the city safe,” Adams said. Both Adams and Stringer also sought to take credit for their advocacy to end stop-and-frisk, with Stringer at one point noting that the two had stood together at press conferences calling for an end to the practice.

“They shouldn’t overstate their credit; the credit really goes to the movement and people.”

“They shouldn’t overstate their credit; the credit really goes to the movement and people, especially young people, who were being stopped for years during the Bloomberg administration,” said Joo-Hyun Kang, executive director of Communities United for Police Reform, a coalition of several community groups that have fought against stop-and-frisk for two decades. “It was the direct action of people across the city. … And it’s really these groups, grassroots organizations mostly, who have been continuing to monitor and fight to ensure that we don’t have to do more litigation in five years.”

Many of those groups are still fighting — not only to reduce police stops even further, but especially to tackle the racial disparities that remain a constant of policing in the city.