Did Russia’s Foreign Minister Get His Bisexual Jesus Riff From TikTok?

Russian officials deny that Foreign Minister Sergey Lavrov gets his misinformation from TikTok. He relies, instead, on an obscure Christian website, which he misreads. The bizarre false claim, in a lengthy opinion essay published Monday, was presented by Lavrov as an example of the sort of “aggressive LGBT propaganda” that Russia has barred by law since 2013. In recent weeks, European Union leaders have strongly criticized Hungary for passing a similar law, which bans the portrayal of LGBTQ+ characters in textbooks, advertising, and even television shows likely to be seen by children.

In both Russia and Hungary, the often violent repression of LGBTQ+ citizens appears to be an effort by reactionary, conservative ruling parties to portray themselves as defenders of traditional, Christian societies that are under siege from progressive ideas imported from the supposedly decadent West.

Lavrov is a veteran diplomat, but he was just handpicked by President Vladimir Putin to enter electoral politics, leading a slate of candidates in upcoming parliamentary elections. In his essay, Lavrov seemed miffed by the recent wave of protests against Hungary’s anti-LGBTQ+ law during the current Euro 2020 soccer tournament, particularly at matches in Budapest or involving the Hungarian team. The tournament resumes Friday with a game between Switzerland and Spain in the Russian city of St. Petersburg. 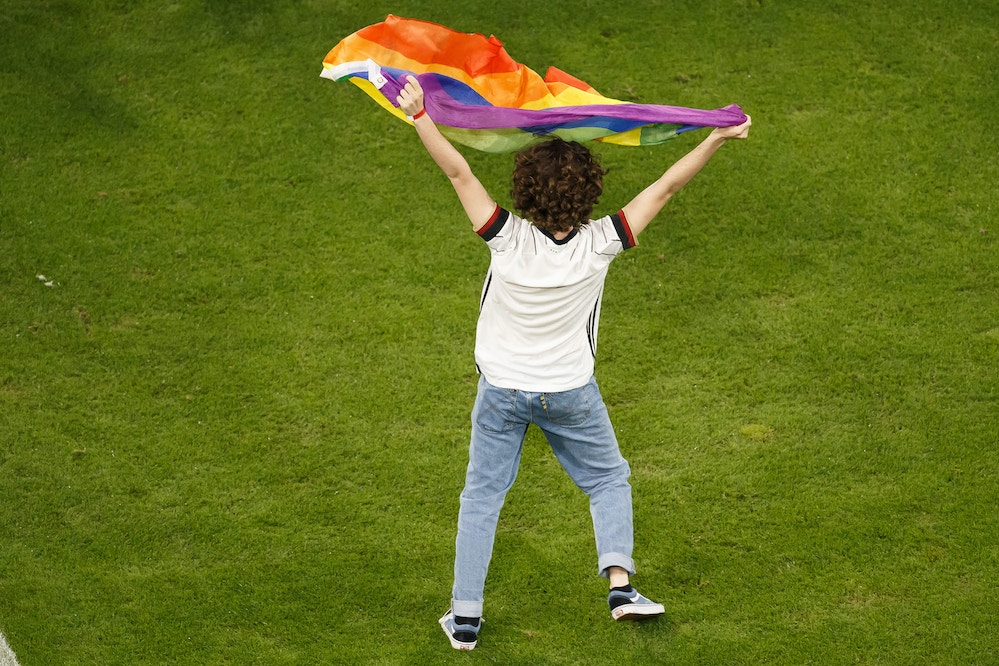 A protester ran onto the pitch waving a rainbow flag before kick-off in a soccer match between Hungary and Germany in Munich last week during Euro 2020.

Because Lavrov did not offer any examples of countries where the supposed bisexuality of Jesus is a standard part of the curriculum, and no one has yet found any, Russian journalists guessed that he might have been riffing off a viral TikTok video, in which an Australian mother who takes pride in educating her young children to be accepting of anyone who is “different, trans, or gay” filmed her 4-year-old son saying that Jesus is “bi and nonbinary.”

As his mother, a TikTok influencer who studied acting at art school, films herself reacting theatrically, the boy reasons that Jesus must be bisexual “because he loves everyone in the world” and nonbinary “because he wears a dress and he’s a man.”

Clearly offended by the suggestion from Russian journalists that her boss had based his claim about Western education on information gathered from the musings of a child, Maria Zakharova, the Russian foreign ministry’s chief spokesperson, denied that TikTok was his source in an indignant Facebook post.

Zakharova insisted that Lavrov had been referring to information published in the Western media. But the sole example she cited was an obscure report from Christian Today, a small Christian news site based in London, that makes no reference to any teaching of children. Instead, the report describes an online Pride event earlier this month for teachers in Scotland, which was organized by their union and included scenes from the play “The Gospel According to Jesus, Queen of Heaven,” performed by the trans playwright Jo Clifford.

A spokesperson for the Educational Institute of Scotland, the teachers’ union, confirmed in an email to The Intercept that “Students in Scotland are not taught that Jesus was bisexual. The Minister is misinformed if he thinks otherwise.”

The union “held a member-only, opt-in online Pride event, which featured a range of performances by LGBT artists, one of which was by Jo Clifford.”

Clifford wrote in an email of her own that the Russian foreign ministry’s account of her performance “is inaccurate in every respect.”

“The event was open to teachers who were members of the union only,” Clifford wrote. “My play is not taught in British schools; and it does not say Jesus was bisexual. It has nothing to say about the historical Jesus. It imagines Jesus coming back to earth in the present day (in accordance with traditional Christian beliefs) and imagines him to belong to an oppressed group (again according to traditional Christian beliefs).”

Clifford added that her play invites the audience “to imagine Jesus returning as a trans woman. She preaches a sermon; she tells parables based on those in the Gospel; she offers the audience bread and wine; she blesses them.”

Because the play challenges “traditional Christian beliefs both in the West and the Russian Orthodox church, which are fiercely trans- and homo-phobic,” Clifford wrote, conservative Christian groups have objected since it was first performed in 2009, and “a tiny minority protested against my performance” for the Scottish teachers.

So, if the Christian Today article Zakharova cited was Lavrov’s source, he failed to read it very closely. The report is about a performance at a Zoom event for adult teachers, which was not attended by any students, of a play that does not argue that Jesus was bisexual.

As the exile Russian news site Meduza notes, the details of Lavrov’s claim are much closer to what the 4-year-old Australian boy told his mother he’d learned in school than anything in the article cited by his spokesperson. But even if the boy’s apparently fanciful account of what he was taught at school could be shown to be true, that’s far from evidence that, as Lavrov claimed in print, schools in a number of Western countries teach children as part of the curriculum that Jesus was bisexual.

According to Meduza, Russian journalist Dmitry Kolezev argues that the most likely explanation is that the TikTok video was the original source of Lavrov’s delusional claim about Western schools, but the ministry was embarrassed to be caught relying on the musings of a child and scrambled to find an alternative. The report on the Scottish play was all they could come up with, in a retrospective search to find evidence of something that’s not true, even though it transparently fails to support Lavrov’s claim in multiple ways.

Such a comically shoddy effort at spin would normally be funny, Kolezev observed, but for the fact that the Russian government’s cynical lie about the supposed depravity of childhood education in the West is being used to justify the repression of LGBTQ+ Russians and gin up hatred against them.