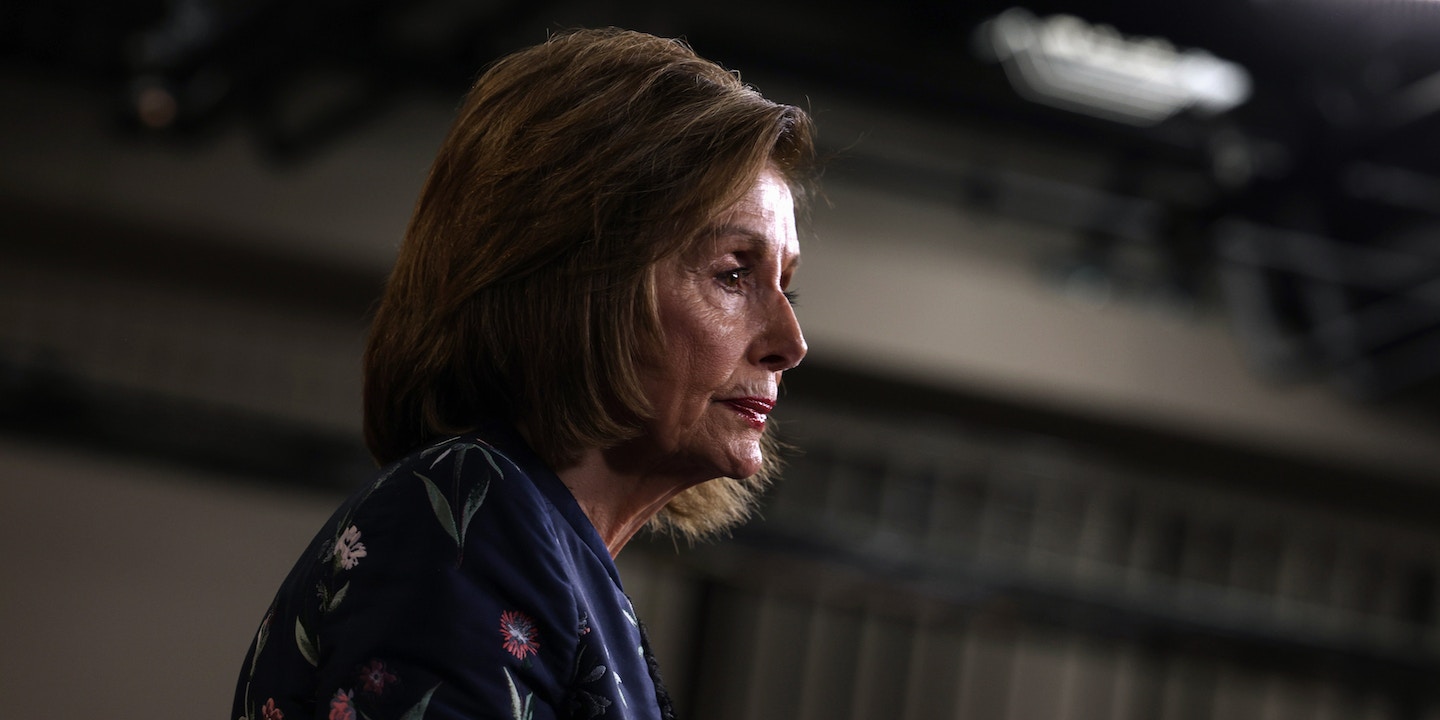 As the 2022 midterm elections draw closer, Democrats in Congress are taking on a new strategy: blaming Republicans for voting to defund the police. And according to Democratic aides, the change in messaging is coming straight from the office of House Speaker Nancy Pelosi.

Establishment Democrats have spent months under fire, from both Republicans, who claimed that Democrats wanted to weaken law enforcement, and from members of their party’s own progressive wing, who were critical of the way the party bent to some of those attacks. Now those same moderate Democrats are fighting back — namely by highlighting Republicans’ vote against the American Rescue Plan, Congress’s coronavirus aid package and Democrats’ only major legislative achievement this session.

Pelosi was instrumental in the passage of the American Rescue Plan, which allocated money toward pandemic relief, increased the child tax credit, and expanded health care coverage; President Joe Biden signed the package into law in March. Given that every Republican in Congress voted against it, the bill is also now providing Democrats with new ammunition.

Localities have started to spend the first rounds of funds released in the package to hire more police officers, retain existing officers, and keep other first responders from being laid off, which means that Democrats now “actually have the ability to talk about specific localities where people are being kept on the police force,” said one senior Democratic aide who spoke on the condition of anonymity. “And we’re able to talk about it more concretely as opposed to theoretically.” In addition, they added, the GOP response to the January 6 attack on the Capitol made it easier for Democrats to highlight the party’s hypocrisy. “Once Americans saw Republicans disrespect the officers who protected them on January 6, it became a lot easier for us to point out hypocrisy on policing.”

Ahead of the 2022 midterms, Democrats still plan to push the message that they are the party of economic recovery, but the attack on funding for law enforcement will certainly be a new part of their offensive strategy. “Members are excited to punch back,” the aide said. “Republicans have spent an entire year essentially lying about what Democrats support and what Democrats have voted for. The fact that Democrats have really settled on a line here to push back on it, and to really go on offense, excites Democrats.”

At least a dozen Republican districts have either hired or retained police officers with funds from the American Rescue Plan, according to the aide, including the districts of Reps. Dan Crenshaw of Texas and Elise Stefanik of New York, both of whom have repeatedly claimed that Democrats want to defund the police. “These are places where you’re going to see Democrats hold them accountable and talk about the fact that they voted against funding for their own local police departments,” the aide said.

Several members have already started to implement the new strategy. “The former President and Radical Republican are disrespecting police officers,” Rep. Ted Lieu, D-Calif., tweeted July 22. “My colleagues on the other side of the aisle in @HouseJudiciary this morning were yet again talking about ‘supporting the police,’ ‘funding the police.’ But they voted against the opportunity to fund the police in the American Rescue Plan. Watch what they do, not what they say,” Rep. Val Demings, D-Fla., Orlando’s former police chief, tweeted the previous day. Earlier this month, Rep. Madeleine Dean, D-Pa., tweeted the same slogan: “4 Months Ago: All Republicans voted against #AmericanRescuePlan including funding for Police. 1 Month Ago: 21 Republicans voted against honoring Police for their work during the 1/6 Capitol riot. Now: Capitol Police may run out of funds. Watch what they do, not what they say.”

The Democratic National Committee is also using the new line of attack. After Capitol Police officers testified to Congress on Tuesday during the first hearing of the select committee investigating the January 6 riot, the DNC issued a press release describing the GOP as the caucus that “voted against additional funding for police” and criticized Minority Leader Kevin McCarthy, R-Calif., and Rep. Marjorie Taylor Greene, R-Ga., for “*counterprogramming* police officers testifying about the day they protected those very same members of Congress from the violence of January 6.” While Republicans “disrespect the police officers,” the press release continued, the House committee “is hearing from police officers on that violent day and the country is reminded Republicans are siding with violent rioters and Donald Trump over justice and our police.”

The strategy isn’t necessarily designed to be effective with Republican voters, according to another Democratic aide, but to give cover to moderate members who complained that calls to defund the police hurt their margins in the 2020 election. “The majority is made in the suburbs. It gives cover for them when they go back to their district, because it gives them a return message, it gives them something to fire back with,” said the second Democratic aide. Part of the criticism last cycle from Beltway strategists and moderates was that Republicans were accusing Democrats of wanting to defund law enforcement, and “we didn’t have anything to say back. Now, you have something to say back.” Democrats would be “foolish” not to carry the strategy into the midterms, they added. “The American Rescue Plan and the child tax credit is what you will run on in the midterm,” and part of that is hitting Republicans for their votes.

The new messaging has already provoked a response from the GOP, at least on Twitter. In a CNN town hall on July 21, anchor Don Lemon asked Biden how he responded to criticisms from Republicans that the party wants to defund the police. Biden said he didn’t support that and that he didn’t know any communities that didn’t want police. The House GOP Twitter account quote-tweeted a clip of Biden’s answer and wrote, “So why do Democrats’ [sic] support defunding the police?”

In a follow-up statement to The Intercept, Patterson added, “Our top message will always be the economy and the money we’re putting into the pockets of working and middle class families. But as long as Republicans lie about crime, we’re going to force them to own their hypocrisy and explain why House Republicans voted to defund their own police departments, disrespect the officers who defended Capitol from violent Insurrectionists, and against common sense legislation to keep guns out of the hands of people who shouldn’t have them.”

It’s not clear that the entire caucus is on board. Several progressive members have advocated to reallocate funds away from law enforcement agencies and toward community services, including Reps. Alexandria Ocasio-Cortez, D-N.Y.; Jamaal Bowman, D-N.Y.; Cori Bush, D-Mo.; and Ayanna Pressley, D-Mass. And the American Recovery Plan wasn’t the first time Republicans voted to do just that. In 2019, the House passed by voice vote an amendment from Ocasio-Cortez to move millions of dollars away from the Drug Enforcement Agency and toward opioid recovery and treatment programs.

“There’s a lot of hubbub and resistance, particularly from Republicans, on the idea of defunding and reallocating certain resources,” Ocasio-Cortez said during a virtual town hall in June with Bowman in response to an audience question on how each member would shift funds away from the New York Police Department. “Before last year’s protests in 2019, I was able to get almost the entire Republican party to successfully vote for a defund amendment in our appropriations,” Ocasio-Cortez said. “Because when it’s in the context of their communities, it’s very easy for them to see — oh yes, we shouldn’t be treating addiction as a crime. We should be treating it as a public health issue.”