Biometric collection and identification devices were seized last week during the Taliban’s offensive. 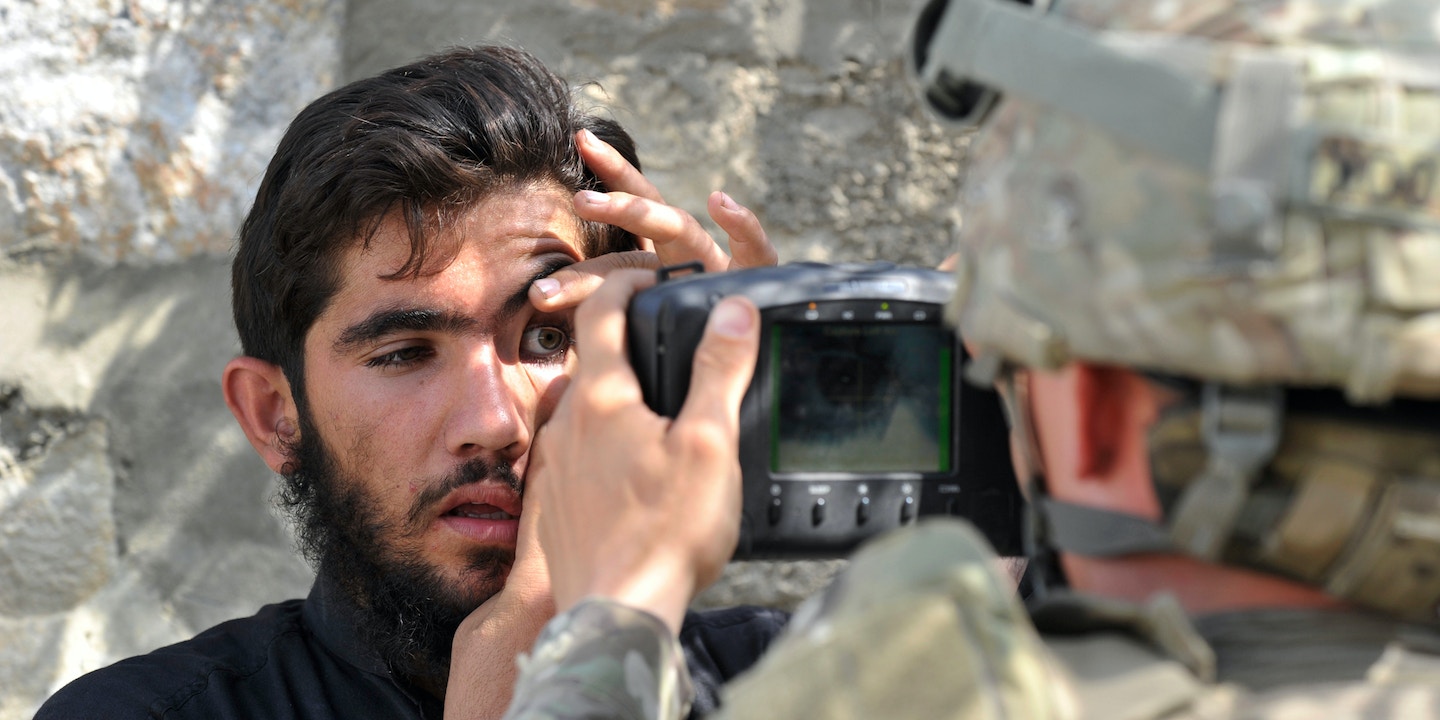 The Taliban have seized U.S. military biometrics devices that could aid in the identification of Afghans who assisted coalition forces, current and former military officials have told The Intercept.

The devices, known as HIIDE, for Handheld Interagency Identity Detection Equipment, were seized last week during the Taliban’s offensive, according to a Joint Special Operations Command official and three former U.S. military personnel, all of whom worried that sensitive data they contain could be used by the Taliban. HIIDE devices contain identifying biometric data such as iris scans and fingerprints, as well as biographical information, and are used to access large centralized databases. It’s unclear how much of the U.S. military’s biometric database on the Afghan population has been compromised.

While billed by the U.S. military as a means of tracking terrorists and other insurgents, biometric data on Afghans who assisted the U.S. was also widely collected and used in identification cards, sources said.

“We processed thousands of locals a day, had to ID, sweep for suicide vests, weapons, intel gathering, etc.” a U.S. military contractor explained. “[HIIDE] was used as a biometric ID tool to help ID locals working for the coalition.”

A spokesperson for the Defense Intelligence Agency referred questions to the Office of the Secretary of Defense, which did not respond to a request for comment.

An Army Special Operations veteran said it’s possible that the Taliban may need additional tools to process the HIIDE data but expressed concerns that Pakistan would assist with this. “The Taliban doesn’t have the gear to use the data but the ISI do,” the former Special Operations official said, referring to Pakistan’s spy agency, Inter-Services Intelligence. The ISI has been known to work closely with the Taliban.

The U.S. military has long used HIIDE devices in the global war on terror and used biometrics to help identify Osama bin Laden during the 2011 raid on his Pakistani hideout. According to investigative reporter Annie Jacobsen, the Pentagon had a goal to gather biometric data on 80 percent of the Afghan population to locate terrorists and criminals.

“I don’t think anyone ever thought about data privacy or what to do in the event the [HIIDE] system fell into the wrong hands,” said Welton Chang, chief technology officer for Human Rights First, himself a former Army intelligence officer. “Moving forward, the U.S. military and diplomatic apparatus should think carefully about whether to deploy these systems again in situations as tenuous as Afghanistan.”

The Defense Department has also sought to share the biometrics data collected by HIIDE with other government agencies such as the Federal Bureau of Investigation and Department of Homeland Security. In 2011, the Government Accountability Office criticized the Pentagon for not doing enough to ensure these other surveillance agencies had easy access to the information, warning that the military “limits its federal partners’ ability to identify potential criminals or terrorists.”

But the U.S. didn’t only collect information about criminals and terrorists; the government appears to also have been collecting biometrics from Afghans assisting diplomatic efforts, in addition to those working with the military. For example, a recent job posting by a State Department contractor sought to recruit a biometric technician with experience using HIIDE and other similar equipment to help vet personnel and enroll local Afghans seeking employment at U.S. embassies and consulates.

The federal government has collected biometric data from Afghans despite knowing the risks entailed by maintaining large databases of personal information, especially given recent cyberattacks on government agencies and private companies. These efforts are continuing to expand.

For example, a February 2020 article published by the Army indicated that the service was modernizing its 20-year-old biometric processing technology and had saved more than 1 million entries in the Pentagon’s Automated Biometrics Identification System, or ABIS, which hosts HIIDE and data collected by other devices as well.

“This updated database will make it more efficient for warfighters to collect, identify and neutralize the enemy,” wrote Col. Senodja Sundiata-Walker, project manager for the Pentagon’s biometrics program.

President Joe Biden’s proposed budget for the Army in fiscal year 2022 seeks more than $11 million to purchase 95 new biometric collection devices expanding upon those used in Afghanistan and Iraq.