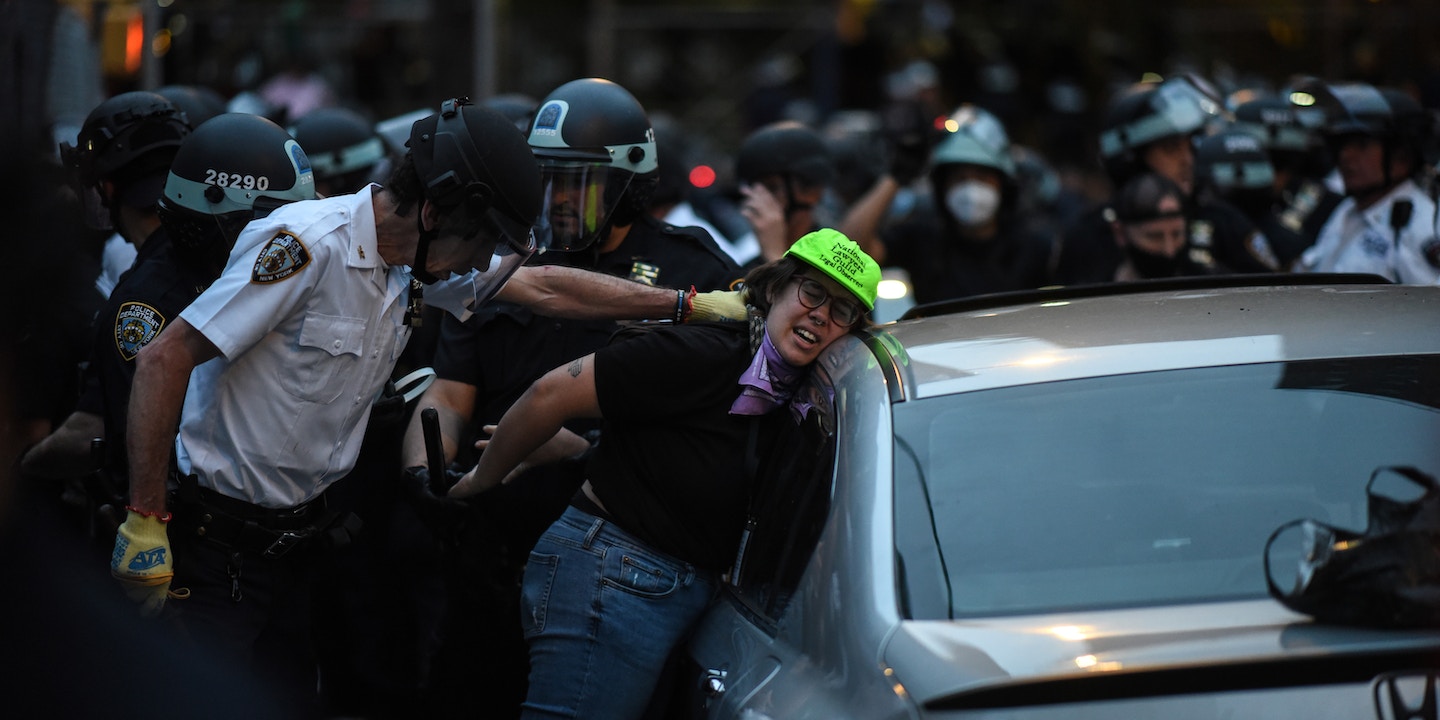 The rash of civil rights lawsuits against the New York Police Department as a result of its behavior during last summer’s protests continues to grow, with a new suit filed September 2 by a group of people alleging police violated their constitutional rights during the now notorious Mott Haven kettle.

Unlike many of the other suits filed so far, the dozen plaintiffs in this case weren’t protesters. Rather, they were in the Bronx that day as legal observers, participants in a long-running National Lawyers Guild program that trains and equips volunteers to observe protests and document the conduct of the police who respond to them.

The lawsuit describes targeted harassment and violence by the NYPD against legal observers on June 4, 2020, by rank-and-file cops, their supervisors, and the NYPD’s own in-house lawyers. In the 15 months since, the police have conducted no investigation into the treatment of the legal observers, have not responded to letters from the observers’ lawyers, and have insisted that there was nothing inappropriate in their treatment.

The effect, says Gideon Oliver, one of the lawyers for the 12 legal observers bringing the suit, is an NYPD that has escalated its attacks on one of the vital organs of free speech in New York City. “Legal observers perform important functions when police make arrests at demonstrations, and this targeted roundup of legal NLG legal observers at the scene is something that the NYPD brass and city officials have sanctioned by refusing to do a real investigation of what happened, or impose any discipline,” Oliver said. “It’s been dead silence from the police department in response to these plaintiffs’ attempts to get some transparency and accountability.”

The New York City chapter of the National Lawyers Guild has been training lawyers, law students, and legal workers to observe and document the way police respond to protests since 1968. Trained NLG observers are identified by a lanyard badge and a neon green baseball cap.

Official observers don’t enjoy any special constitutional status; everyone on the street, from passersby to journalists, enjoys the same legal right to observe and document public police actions. But the work legal observers do is important. Collecting the names of people arrested at protests is the first step toward ensuring that they have legal representation. During the mass arrests at the 2004 Republican National Convention, those names allowed lawyers to secure a habeas corpus writ for hundreds of protesters who were unlawfully detained by the NYPD, sometimes for days, without access to lawyers.

The NYPD Patrol Guide recognizes the right of people to observe, record, and document the police and specifies that properly identified legal observers are entitled to courtesy and cooperation, including free access through police lines at demonstrations: “Observers shall be permitted to remain in any area, or observe any police activity, subject only to restrictions necessitated by personal safety factors, as determined by the incident commander.”

None of those provisions seemed to be in effect in Mott Haven last June, however, as police rounded up legal observers along with protesters, cuffing them, throwing them to the ground, riffling through their legal notes, forcing them to sit where they could not observe the mass arrests and police violence taking place, and coercing them to leave the scene and cease their observation of police conduct.

The ostensible reason for the mass arrest was that the protest participants were breaking an 8 p.m. curfew then in effect. While this justification is undercut by the fact that the NYPD trapped protesters well before 8 p.m. and then made it impossible for them to leave, it is doubly nonsensical in the case of the legal observers, who were carrying documentation confirming that the mayor’s office had identified them as essential workers exempt from curfew restrictions.

Video from the event shows Sgt. Kenneth Rice, wearing an NYPD Legal Bureau shirt, directing officers to arrest the green-hatted legal observers. “Legal observers CAN be arrested,” he says. The NYPD often says that it deploys the in-house lawyers of its Legal Bureau to protest scenes to ensure that police are following the law, but civil rights lawyers contend that Legal Bureau lawyers often help officers violate the rights of the people they’re interacting with. In Mott Haven, Rice’s legal direction had immediate consequences.

Krystin Hernandez, a law student at the City University of New York and one of the plaintiffs in the lawsuit, was working as a legal observer at the protest when they were seized by police. Hernandez tried to show police the documents identifying them as an essential worker, but, as recorded on video, police knocked the documents out of their hand and then threw them to the ground, face-first, before cuffing them.

Hernandez and other legal observers were rounded up and placed on the ground in a line facing away from the protest and arrests, according to the complaint. A police supervisor came over and told the group that they would have “one chance” to “go home.”

“Because you don’t want us to see what you’re doing here right now?” one of the legal observers asked.

Another plaintiff, Rex Santus, also a CUNY law student, encountered trouble from the police even before the kettle, according to the complaint. Santus was in Mott Haven around 6:30 p.m. when eight police officers jumped out of an unmarked van and surrounded him. Santus was wearing his green hat and identifying badge and carrying papers showing that he was an essential worker exempt from curfew, but the police kept him from leaving, questioned him, and grabbed his notebook, reading through his notes. One of them accused him of “illegal countersurveillance of the NYPD.” Eventually, the police let Santus go, and he carried on with his work at the protest, only to be shoved to the ground by police and put in flex cuffs. Santus hasn’t worked as a legal observer since.

Eventually, all of the legal observers were released at the scene, their arrests never processed. Police continued to push them away from the protest, threatening them with rearrest. Many of those bringing the lawsuit say the experience has traumatized them and discouraged them from doing further legal observer work. NYPD officers stand in line near a demonstration denouncing systemic racism in law enforcement in Brooklyn, New York, minutes before a citywide curfew went into effect on June 4, 2020.

What happened in Mott Haven on June 4, including the treatment of the legal observers, made headlines immediately. But confronted with accounts from protesters, onlookers, and news media, both NYPD Commissioner Dermot Shea and Mayor Bill de Blasio insisted that police conduct that evening had been exemplary. At a press conference the following day, Shea said the NYPD “had a plan which was executed nearly flawlessly in the Bronx.” De Blasio insisted that reporters describing what they had witnessed were mistaken, that what happened in Mott Haven was “something that the NYPD saw coming,” and that they had responded “effectively.”

Not everyone was persuaded. Two weeks after the Mott Haven kettle, the New York City Bar Association issued a statement describing itself as “gravely concerned.” “The fact that legal observers have become targets for the police indicates that policing strategies in these communities have failed,” the statement concluded. “The reports of police warnings that legal observers are in the area, the subsequent targeting and detention of those observers, and the forced disclosure of privileged material indicates a startling disregard by police forces that their conduct is governed in our society by the rule of law.”

In the months that followed, other investigations confirmed what observers on the ground had reported and decried the NYPD’s treatment of protesters, onlookers, and legal observers. A September 2020 Human Rights Watch report concluded that police conduct in Mott Haven amounted to “serious violations of international human rights law,” noting that “legal observers and volunteers providing jail support are human rights defenders who are protected under international human rights law and should never be targeted for this work.” Reports by the New York City Department of Investigation and the state attorney general also made note of the NYPD’s detention of legal observers.

But none of these letters or reports have elicited any response from the NYPD concerning its treatment of legal observers, according to the complaint. There’s no evidence that Rice or anyone in the Legal Bureau was disciplined or even investigated over the direction to arrest the legal observers, and the NYPD has persisted in its claim that the arrests were entirely appropriate.

The NYPD declined to answer questions about police conduct in Mott Haven and NYPD policy with regard to legal observers. The New York City Law Department, which is representing the NYPD, the mayor, and the various individual NYPD officials and officers named in the suit, did not respond to questions by the time of publication.

In a September 2020 letter to Human Rights Watch, NYPD Deputy Commissioner for Legal Matters Ernest Hart maintained that legal observers were not targeted in Mott Haven, and claimed that in fact they were not exempt from the curfew restrictions and were therefore subject to arrest. “Plainly,” he wrote, “there cannot be a legal observer of a protest that itself is illegal.”

Terence Monahan, then the NYPD chief of department, who personally supervised the Mott Haven action, told DOI investigators that responsibility for the detention of the legal observers fell on the Legal Bureau, but that he ordered them released as soon as he learned they had been detained. Monahan was talking to a representative of the mayor’s office who was on the scene, he said. “I told his person I was going to release all the legal observers.”

Shea, for his part, has answered questions about the detention of legal observers by insinuating that they might be using their status as cover for illegal activity. Interviewed by the DOI, Shea couldn’t recall whether the NYPD had any specific protections for legal observers in mass arrest situations. “If there is a situation where they are arrested, what I have seen is that they are committing violations under the guise of being, whether it is an essential worker or legal observers or something along those lines,” he told investigators.

Testifying before New York Attorney General Letitia James, Shea sounded a similarly skeptical note. “Legal observers, I’m not sure what you’re referring to there,” he told James. “Having a shirt or a hat that says Legal Observer, does not mean that person is an attorney … that they’re actually performing any legal function. We go on the facts in front of us, and we had incidents of many people committing crimes and violations, and we responded to those facts.”

Absent any indication that the NYPD has reconsidered the harassment, assault, and detention of a group that functions as the eyes and ears of the legal institutions ensuring that the right to protest is protected, civil rights lawyers say they fear the NYPD and the government of New York City will continue to brutalize and sideline legal observers at future protests.