The Most Terrifying Thing About 9/11 Was America’s Response

The fear I experienced that terrible day in New York doesn’t begin to compare with the dread I’ve developed watching our path since. 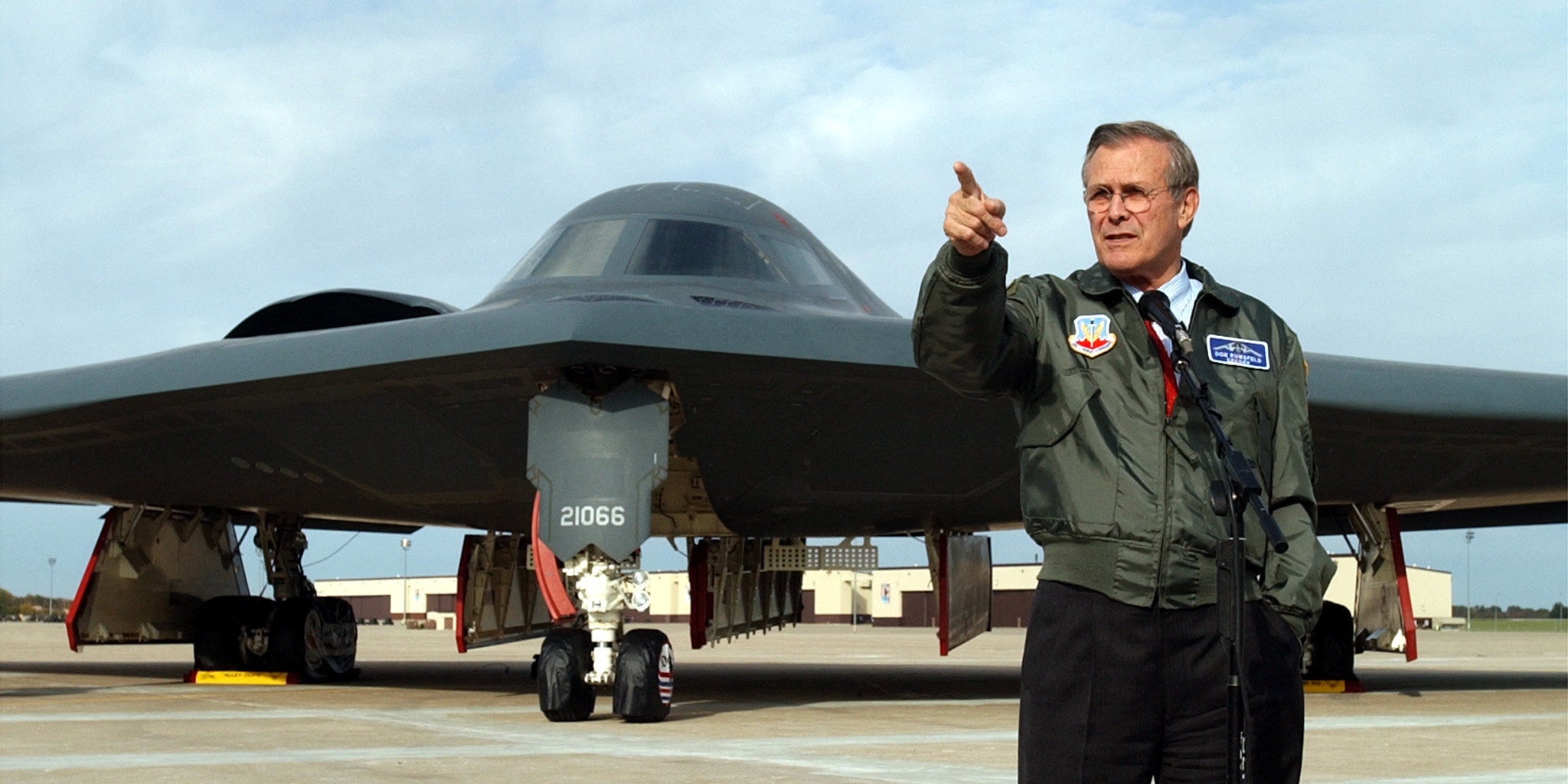 Secretary of Defense Donald Rumsfeld answers reporters’ questions during a visit to Whiteman Air Force Base near Knob Noster, Mo., on Oct. 19, 2001.

On September 11, 2001, I woke up around 8:30 a.m., took a shower, and made a mug of Nescafé instant coffee. By the time I opened up my laptop and maneuvered to Common Dreams — the favorite website of all progressives of that time — it was 9 a.m.

Common Dreams was then designed with the important stories in the middle of the page, with brief snippets about less significant issues in a column on the left. It was the left-hand column that featured one sentence in red: “Plane hits World Trade Center.”

This gave me three minutes of delicious ignorance during which it was possible to believe that a plane had hit the World Trade Center’s north tower by accident, three minutes to live in the post-9/11 era without realizing it. Then, at 9:03 a.m., like everyone who’d turned on a television, I saw United Flight 175 smash into the south tower.

I soon left my apartment and walked to Seventh Avenue, where there was an unobstructed view of Fulton Street two miles to the south. What I’d seen on TV was also there, in reality: thousands of people dead or about to die in the most excruciating ways imaginable.

I’ve thought about that moment in one way or another every day since. As a cosseted, white, male, college-educated American, I’d had fulsome opportunities to consume history’s many hideous events mediated through movies and books. Yet the mortifying truth is that I’d never genuinely understood, not just with my brain but also in my stomach and intestines, that the victims of all of them were as real in every way as I am. World War II, I’ve realized, was not a long-running show on the History Channel. The Rwandan genocide was not a movie starring Don Cheadle. The El Mozote massacre was not an artful article by Mark Danner in the New Yorker.

Before long, I was back at my building, where my upstairs neighbor was describing her morning to several attentive listeners. She’d been at her job on one of the top floors of the World Trade Center’s south tower at 8:46 a.m. and by happenstance was glancing out the window at the north tower as American Flight 11 flew into it. She said she and her co-workers were advised not to evacuate, but half of them did anyway, and had made it down in the stuffy stairwell to below the 78th floor when their building was hit by Flight 175. So they lived. They hurried to the ground floor, and then she’d just walked home, as the south tower collapsed behind her.

There she was, in her wee Greenwich Village apartment, every inch utilized like in a cabin on a ship. She’d been grazed by the wings of — not the Angel of Death, exactly, since that constantly visits everywhere on Earth, but a more specific celestial being, the Angel of Humanity’s Love of Ultraviolence.

We now know that later that day then-Secretary of Defense Donald Rumsfeld was barking instructions at one of his minions, who faithfully wrote them down. The minion’s notes, later obtained by a blogger via a Freedom of Information Act request, included this line of Rumsfeld’s: “go massive — sweep it all up, things related and not.”

Ever since I read that, I’ve pondered this question: What exactly was this “it” — related to 9/11 and not — that Rumsfeld was so desperate to sweep up? And why did we have to keep at it for 20 years, at the cost of $8 trillion and 1 million lives?

There’s a spectrum of possible answers. Some of them are quasi-rational and are articulated in the effluvia continually generated by the U.S. foreign policy apparatus. But I’ve come to believe that we can’t stop there, and a deeper, more accurate explanation can only be found in the murky psyches of the people like Rumsfeld at the top of U.S. society.

Rumsfeld himself wrote a memo months before 9/11 in which he explained the core problem facing the U.S. after the collapse of the Soviet Union: There were now “new regional powers” that were “arming to deter us from bringing our conventional or nuclear power to bear in a regional crisis.” In other words, we did not face the threat of being attacked; rather, we faced the threat of being deterred by other countries when we wanted to attack them.

The same perspective was expressed at great length in “Rebuilding America’s Defenses,” a famous paper produced in 2000 by the neoconservative think tank Project for the New American Century. First of all, it stated, all in bold, “At present the United States faces no global rival. America’s grand strategy should aim to preserve and extend this advantageous position as far into the future as possible.”

But there was a snake in this Garden of Eden. Technological developments might “soon allow lesser states to deter U.S. military action. … When their missiles are tipped with warheads carrying nuclear, biological, or chemical weapons, even weak regional powers have a credible deterrent. … America and its allies, rather than the Soviet Union, have become the primary objects of deterrence. … Projecting conventional military forces or simply asserting political influence abroad, particularly in times of crisis, will be far more complex and constrained.”

This was too brutal a worldview for American politicians to articulate. But it at least was logical: We’re going to run the world for as long as possible, and it’s therefore impermissible for countries we don’t like to prevent us from bombing them.

Things went downhill from there, however. In a 2004 Esquire article, a “senior [Bush] administration official” explained why the U.S. had needed to invade Iraq. It turned out that Iraqi leader Saddam Hussein’s continued existence in power “resulted in a very bad message to the world, including to Islamic terrorists, that America … could be defied.”

This emotionalism about Saddam was bipartisan. In 1993, the Clinton administration proclaimed that Iraq, having been defeated in the 1991 Gulf War, had tried to assassinate former President George H.W. Bush while the elder Bush was taking a victory lap in Kuwait. This later turned out to have been made up in exactly the same way as all the tales about Iraq’s weapons of mass destruction. Nonetheless, Clinton officials were filled with rage about it. As the New Yorker reported at the time, they were furious about Saddam’s “near-suicidal defiance of American pressure. … Many officials in the Pentagon and the State Department had become increasingly angry with Iraq in the early months of the Clinton Administration, feeling that Saddam Hussein had been ‘getting away with things.’”

This is clearly not the language of adults discussing how to deal with other adults. Rather, it’s the mindset of frustrated parents whose children won’t do what they’re told.

Even this, though, was more sober than the quasi-sexual perspective of others in the U.S. foreign policy establishment. Thomas Friedman, the three-time Pulitzer-winning New York Times columnist, famously explained in 2003 a few months after the invasion of Iraq, “We needed to go over there, basically, and take out a very big stick right in the heart of that world. … Well, suck on this! [That] is what this war was about. We could have hit Saudi Arabia. … We could have hit Pakistan. We hit Iraq because we could.”

“Why did you support the Iraq war?” [Bush aide Michael] Gerson asked him.

“Because Afghanistan wasn’t enough,” Kissinger answered. In the conflict with radical Islam, he said, they want to humiliate us. “And we need to humiliate them.”

Why are all these people lost in these disturbing fantasy worlds? After witnessing the last two decades, I’d suggest that we need to understand a peculiar quirk of human psychology: The powerful always loathe those with less power. My grandfather was a historian who spent his life studying the Spanish conquest of the so-called New World, and as he put it:

The hostility of those who have power toward those who can be called inferior because they are different — because they are others, the strangers — has been a historical constant. Indeed, at times it seems to be the dominant theme in human history.

The “it,” then, that Rumsfeld wanted to destroy on 9/11 was almost certainly every frustration he felt at the rest of humanity. This started with Al Qaeda and easily extended to Saddam and Iraq. But we can be sure that he also hoped to cow all the non-white people around the globe who were generally failing to comply. Next he could overwhelm the obstinate Europeans with their affectations to a higher morality. Obviously the Democrats, who continually tried to steal his money, would have to be crushed. And then at long last his daughter, going to Oberlin and dating that white guy with dreads, would see the error of her ways.

Of course, this doesn’t make “sense” in the way we want to think of it. But neither has the “war on terror.” It’s been 20 years of mindless violence, cruelty, and waste, the U.S. lashing out like a gigantic beast without a functioning frontal cortex, visiting numberless 9/11s on innocents as it staggered around the globe. But that does make sense if you ignore all the speeches and op-eds and instead start from the presumption that the political class running this country is overflowing with the primate wrath of the powerful who are nonetheless not omnipotent.

In the weeks after 9/11, I told friends who didn’t live in New York that Al Qaeda had really put the terror back in terrorism. But the fear I experienced that terrible day does not begin to compare with the dread I’ve developed since. On September 11, 2001, I realized that I was on Al Qaeda’s list. Since then, I’ve learned that I’m also on the list of the far more mighty people in charge of America, just a little further down. Even with the most concrete dangers facing us — the destruction of a livable biosphere, an enduring pandemic, and much more — they are absolutely committed to following the same path, driven onward by complex delusions. Power tends to corrupt, not just in a standard moral sense but also intellectually and emotionally, and they’ve held extreme power for a very long time. What I know now that I didn’t know then is that if we let them, their corruption will surely destroy us all.