A federal judge who wants Buffalo’s incumbent mayor back on the ballot is being scrutinized for his real estate ties. 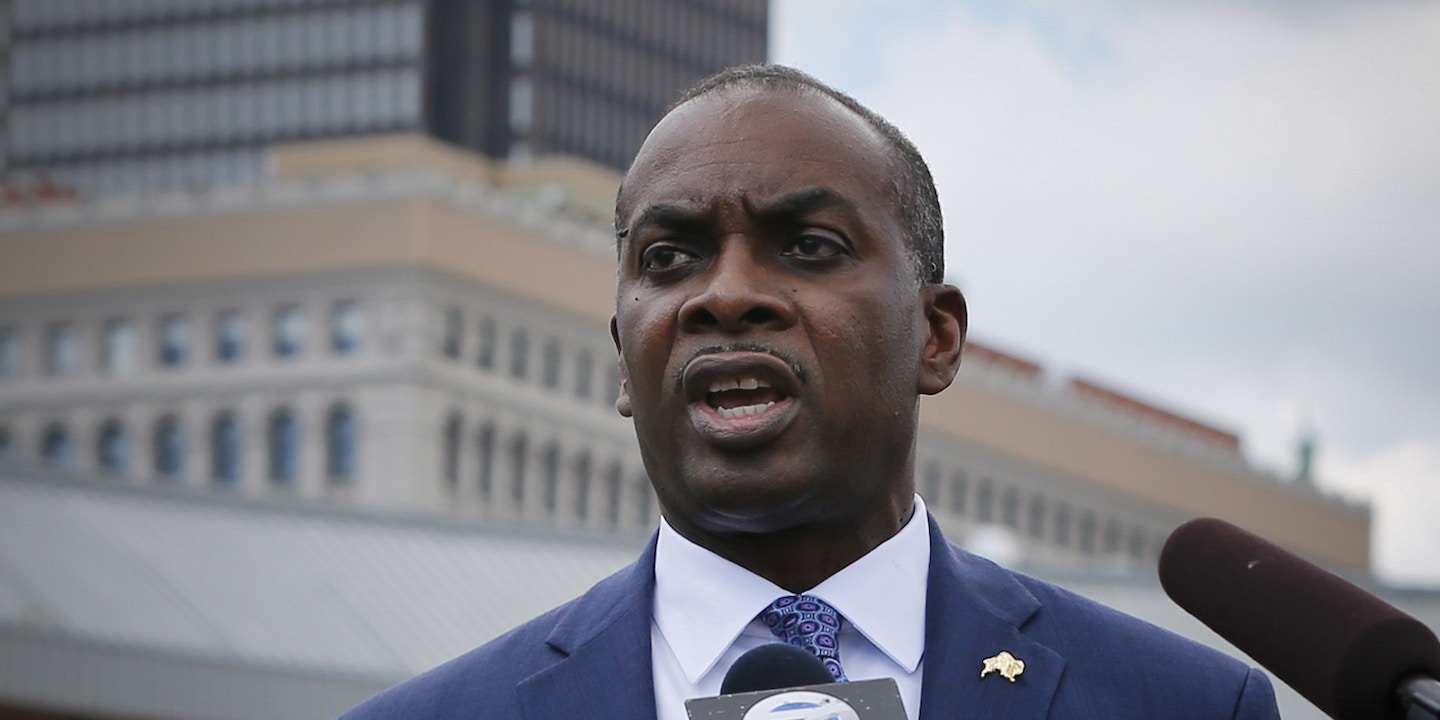 Walton, an organizer and nurse, co-founded and served as executive director of a community land trust in 2017 to create affordable housing in Buffalo’s Fruit Belt neighborhood and combat gentrification fueled in large part by traditional real estate development. As mayor, she would have the power to expand that land trust and grow the tax base in Buffalo’s gentrified neighborhoods. For the city’s biggest developers, her mayorship could represent a complete paradigm shift.

So it’s little surprise that a good number of those developers, many of them Republicans, are backing Brown’s last-ditch attempts to get on the ballot for the November 2 general election or, in the event that he’s unable to do that, to run a write-in campaign.

The involvement of conservative developers is no fluke: Close to one-third of the signatures Brown submitted in his August 17 petitions to appear as an independent candidate on the November ballot came from members of right-leaning parties, local NBC affiliate WGRZ reported. Other major GOP donors, as well as a Washington, D.C., real estate mogul who was convicted in 2006 of wire fraud and accused of bribing an official for government contracts, have contributed to Brown’s campaign. And unlike in the New York City mayoral race, in which President Joe Biden and former New York Gov. Andrew Cuomo congratulated primary winner Eric Adams early on, Walton has received no such declarations of national Democratic support.

Yet it’s still unclear whether Brown will appear on the ballot at all. After losing the primary to Walton, Brown quickly launched a write-in campaign for the general election. That effort came per the request of some in Buffalo who don’t want to see Walton take office, including conservative developer Carl Paladino, who also floated the idea of running against her after Brown’s primary loss. (Brown distanced himself from the developer, who is now telling voters they should stay home.) Around the same time, Brown also submitted petitions to appear on the November ballot (under a newly formed “Buffalo Party”). But his petition came long after the May 25 deadline to submit such a request had passed, and the issue is now tied up in courts — where, again, developer influence raises red flags. Brown’s campaign is now fighting several simultaneous legal battles in state and federal court in the hopes that a final ruling will find New York state election law unconstitutional — just before ballots are to be printed — and allow him to appear on the ballot.

On September 3, federal Judge John Sinatra Jr. ruled in Brown’s favor in a case brought by his supporters to allow him on the ballot. Sinatra’s brother, Nick Sinatra, is the founder and chief executive officer of Sinatra and Company Real Estate, often shortened by the company to Sinatra & Co., and a major supporter of Brown’s. He has given at least $10,400 to Brown’s mayoral campaigns since 2013, including contributions from the company, and $2,000 since his last election in 2017. Buffalo’s development industry has contributed significant amounts to Brown’s mayoral campaigns since the early 2000s, and Buffalo developers were among the wealthy donors to pour last-minute cash into Brown’s primary campaign in June.

Judge Sinatra was also previously a partner at a firm that gave handsomely to Brown’s mayoral campaigns and has routinely represented Brown and the city in legal matters to the tune of millions of dollars — including a 2010 lawsuit over retaliation against a whistleblower in the police department.

On the day of Sinatra’s ruling, a state Supreme Court judge also ruled in Brown’s favor in a separate case brought by his campaign. A judge with the appellate division of the state Supreme Court issued a stay on that ruling, which previously found New York’s state election law unconstitutional and sought to overturn the earlier decision by the Erie County Board of Elections, the elections board for the county in which Buffalo is located, and allow Brown to appear on the ballot.

“What this looks like is the entire political establishment closing its fist to prevent a candidate from the left from winning an election in Buffalo.”

“What this looks like is the entire political establishment closing its fist to prevent a candidate from the left from winning an election in Buffalo,” said Rob Galbraith, senior research analyst at the Public Accountability Initiative, a nonprofit that does public interest research. (Galbraith has contributed to and done phone banking for the Walton campaign.) “The conflict of interest is so clear that it’s a very useful illustration of a larger dynamic that’s going on,” he added. “The entire power elite in Buffalo and western New York is somewhat determined to try to stop Walton after she sort of slipped one by them in the primary.”

The Brown campaign did not respond to requests for comment.

Brown has long been dogged by allegations of corruption and criticism for his dealings with developers. A Cleveland developer sued Brown in 2011 for corruption and racketeering over allegations that the mayor axed a housing project because the developer wouldn’t give a job to one of his supporters. The mayor’s former deputy, Steve Casey, cooperated with an FBI probe into corruption linked to a consulting firm he founded. The firm pleaded guilty to wire fraud in July.

During the mayoral primary, Brown’s developer relationships and real estate interests were again a frequent point of criticism.

Brown appointed two lawyers, Shannon M. Heneghan and Peter J. Savage III, who previously represented Sinatra & Co. to Buffalo City Court in 2019. A 2018 analysis by the Public Accountability Initiative showed that Sinatra & Co. owed more than $800,000 in property taxes and continued to receive close to $1.5 million in public subsidies for myriad projects and through subsidy programs. One such program is the statewide 485-a program, which awards tax breaks to developers that repurpose old properties for mixed use, passing millions of dollars of taxes on to the city. The program has been criticized by housing advocates and officials who say developers have exploited it to extract rents above market rate, avoid their fair share of taxes, and build brand new properties rather than repurposing old ones. Just after the report was published, Brown appeared in a public relations video for Sinatra & Co.

“Pretty much everywhere you look there’s some threads drawing Brown and Sinatra together,” said Galbraith, the Public Accountability Initiative analyst.

Sinatra & Co. has spent more than $310,000 on lobbying on real estate issues since 2013, according to public filings with the New York State Joint Commission on Public Ethics. Sinatra & Co. hired the lobbying firm Masiello, Martucci and Associates to do much of that work. The lobbying firm has also represented the city of Buffalo. The firm’s president, Anthony Masiello, who was himself mayor of Buffalo from 1994 to 2005, is also supporting Brown’s write-in campaign and appeared on stage with Brown at its launch. (In addition, a former partner, Carl Calabrese, a Republican political strategist and former Erie County executive, had previously lobbied for Sinatra & Co.)

Brown announced the launch of his write-in campaign on June 28 at a landmark property owned by Douglas Jemal, the multimillionaire developer convicted of wire fraud whom Trump pardoned last year, who contributed $5,000 to Brown’s campaign on June 22, the day of the primary.

Before he became a federal district judge, Sinatra was a partner at Hodgson Russ LLP, one of Buffalo’s biggest and most influential law firms. The 400-person firm has been a strong supporter of Brown’s campaigns since the early 2000s. The firm contributed more than $64,000 to Brown’s mayoral campaigns since 2006, including $21,000 since his last election in 2017. While at the firm, Sinatra contributed $2,000 to former Rep. Chris Collins, R-N.Y, who later pushed for Sinatra’s nomination and invested millions in Nick Sinatra’s real estate company, including a $1 million loan. (Nick gave more than $17,000 to Collins’s campaigns.)

In 2019, Collins resigned and pleaded guilty to insider trading. (He was pardoned by Trump last year.)

New York’s Democratic senators split on their support for Sinatra during his 2019 confirmation vote. Sen. Chuck Schumer voted to support Sinatra. Sen. Kirsten Gillibrand voted against him and cited his membership in the Federalist Society as indicating views “far outside the judicial mainstream,” adding that he had “expressed pro-corporation views in the past.”

During a September 3 hearing in the federal case, Sinatra said he was asked why he did not recuse himself from the Brown case and said he saw no reason to do so. Sinatra did not respond to requests for comment through a clerk.

“Here we have just a heap of personal connections to the outcome of this election that I would say unequivocally is a conflict of interest.”

The federal court set a hearing for appeals from both sides for Thursday. Brown’s team is claiming that a change by the state Legislature earlier this year that moved up campaign filing deadlines was unconstitutional.

Walton’s campaign is arguing that the law stands and said that while it isn’t appealing Brown’s case based on the appearance of a conflict of interest with some of the mayor’s developer friends, the issue is still relevant.

“Byron Brown’s legal actions epitomize the reasons voters rejected him in the Democratic primary in June: his contempt for everyday Buffalonians, his bullying of anyone who isn’t wealthy and well-connected, and his flagrant disregard for the law,” Walton said in a statement to The Intercept. If elected mayor, Walton said the city would “finally stop padding the windfall profits of the billionaire real estate developers to whom Byron Brown is accountable.”

Walton’s campaign says the legal battle is draining significant funds from its coffers. Her campaign estimates that the cost of legal proceedings will total between $50,000 and $100,000.

“Our campaign is financed by grassroots contributions from ordinary people; Byron Brown is determined to drain our funds through expensive legal challenges,” Walton said.