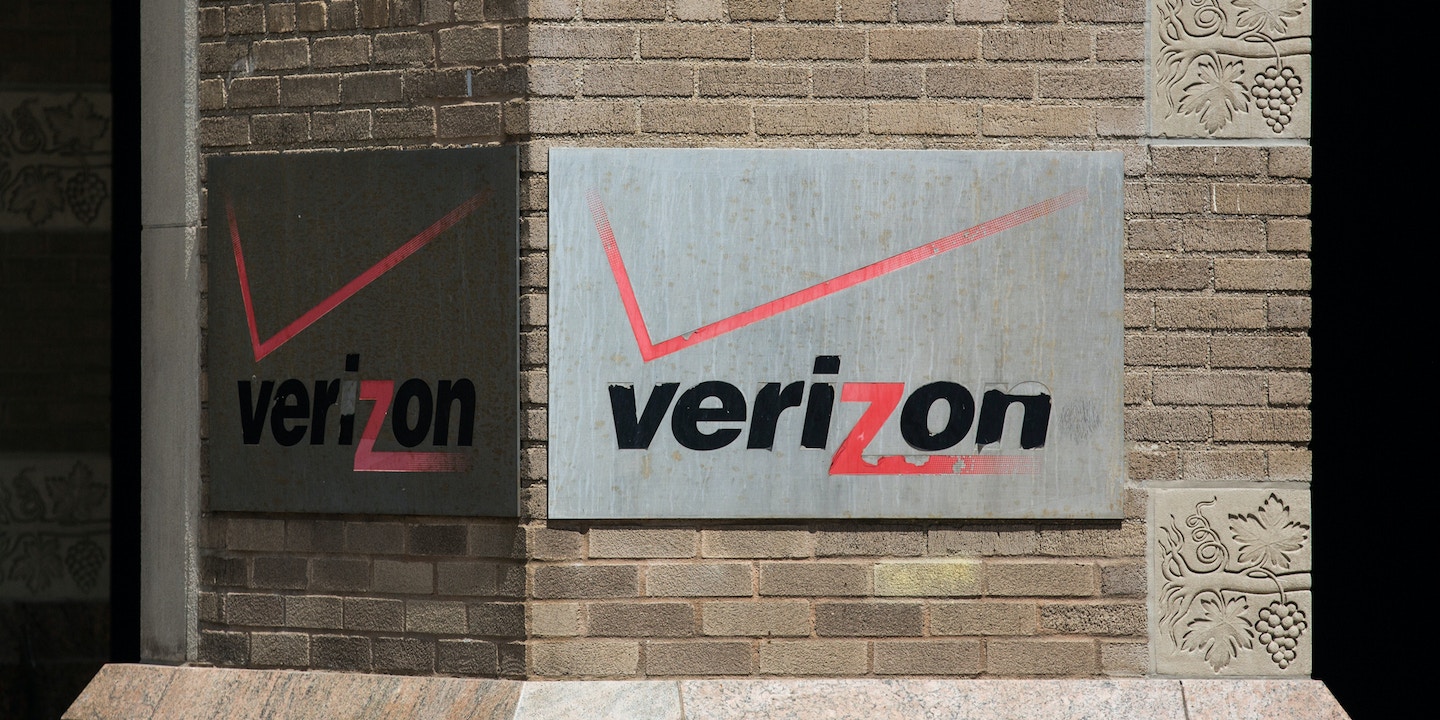 Despite earning record profits and paying one of the lowest effective tax rates — and for several years even a negative tax rate — Verizon is asking its employees to tell Congress to oppose a corporate tax increase favored by the Biden administration.

“We need you to lend your voice to the fight,” an internal company email, widely distributed to the telecom giant’s employees, reads. “Click here to take action.” The prominent link leads to a form message to send to the employee’s congressional representative.

The email is a sign of big business’s desperation to stop a corporate tax increase. To get rank-and-file workers to care, the memo argues that “as much as 70 to 85% of the corporate tax is borne by wage earners.” It’s unclear exactly where this claim is coming from — no source is provided — but it’s a common piece of rhetoric from employers trying to argue for a lower tax rate.

When Trump administration Treasury Secretary Steve Mnuchin cited a similar figure in an interview with Fox News Sunday host Chris Wallace about the Trump tax cuts in 2017, Mnuchin said that “most economists believe that over 70 percent of corporate taxes are paid for by the workers.” Wallace pointed to his own Treasury Department’s assessment that between 75 and 85 percent of the proceeds from corporate tax cuts would go to company shareholders, not the workers.

“I was pretty shocked they would actually send us something like that,” a Verizon employee, who asked not to be named for fear of retaliation, said of the email. “I think it’s pretty pathetic that they threatened employees by saying we would be most affected.” 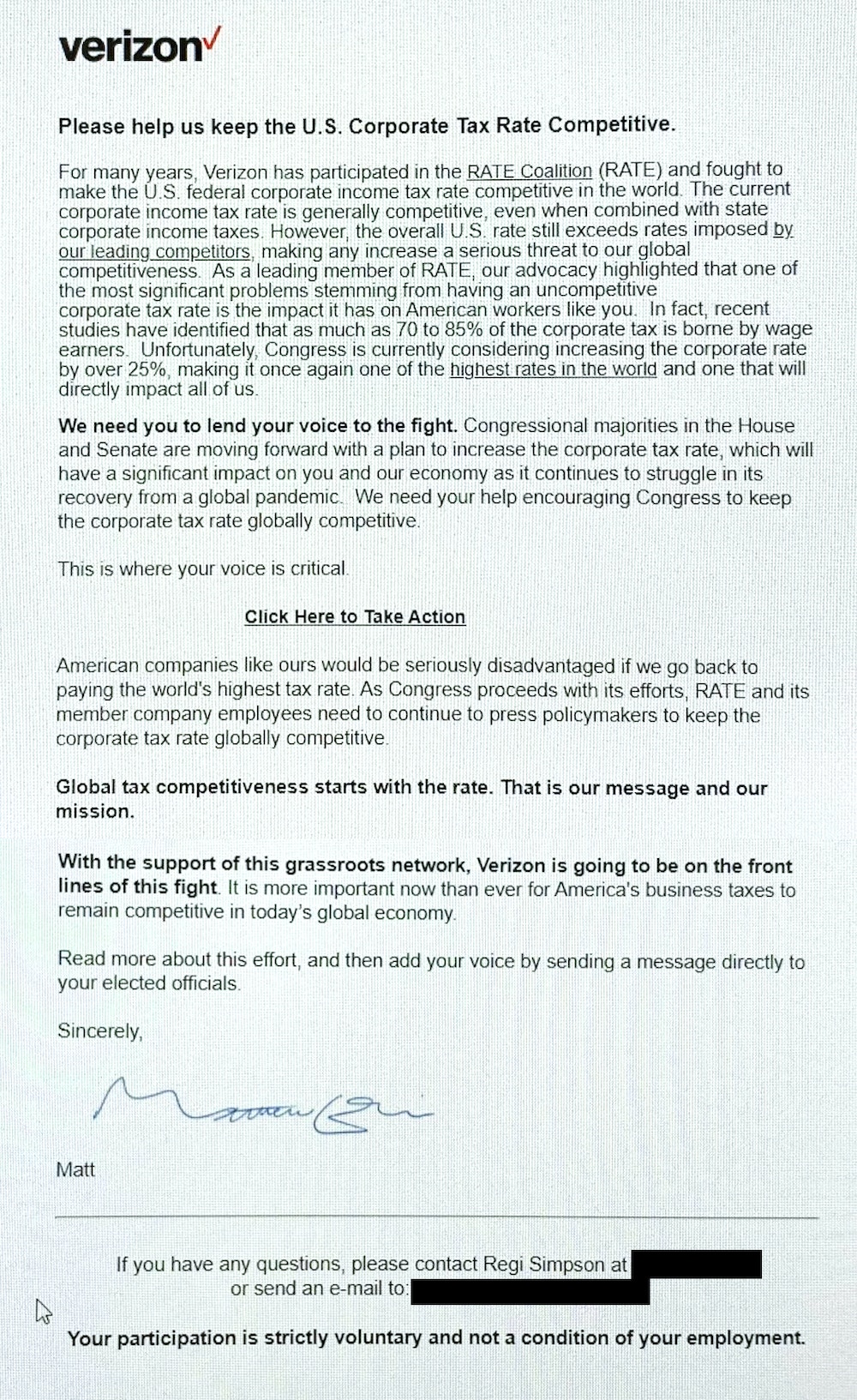 The memo also inveighs against the corporate tax rate, saying the overall U.S. rate “exceeds rates imposed by our leading competitors, making any increase a serious threat to our global competitiveness.” But many corporations pay significantly less than the technical corporate tax rate by employing an array of clever accounting tricks — and Verizon is a prime example of this. From 2008 to 2012, according to Americans for Tax Fairness, it had $1.9 billion in accumulated profits stashed offshore — for which it paid no taxes.

“Urgent Update – Tax increases on the horizon,” reads the subject line of the internal email sent to employees on September 27 by Verizon’s Executive Vice President and Chief Financial Officer Matthew Ellis. “Congressional majorities in the House and Senate are moving forward with a plan to increase the corporate tax rate, which will have a significant impact on you and our economy as it continues to struggle in its recovery from a global pandemic.” Warning that “one of the most significant problems stemming from having an uncompetitive corporate tax rate is the impact it has on American workers like you,” the memo closes on an optimistic note: “With the support of this grassroots network, Verizon is going to be on the front lines of this fight.”

“With the support of this grassroots network, Verizon is going to be on the front lines of this fight.”

The effort, however, is anything but grassroots. As the memo notes, Verizon has for years been “a leading member” of the RATE Coalition, which stands for Reforming America’s Taxes Equitably. The business lobby’s members include Lockheed Martin, Disney, and AT&T. In March, RATE hired Forbes Tate Partners to lobby against the Biden administration’s plan to increase the corporate tax rate. By July, Forbes Tate had shelled out $80,000, according to lobbying disclosure records. Several of the lobbyists were themselves staffers for the congressional leadership now pushing for the tax increase, including Ryan McConaghy, a longtime former staffer for Senate Majority Leader Chuck Schumer, and Stacey Rolland, a former senior adviser to House Speaker Nancy Pelosi. (RATE’s co-chair, Elaine Kamarck, served in the Clinton White House and has been a member of the Democratic National Committee since 1997.)

Regi Simpson, the government relations manager for Verizon listed at the bottom of the email, previously worked for the senior vice president and national political director of the U.S. Chamber of Commerce, a major trade group representing business. Prior to that, she worked in the office of Rep. Richard Hudson, R-N.C. Simpson did not respond to a request for comment.

A corporate tax increase has emerged as a crucial part of how to fund Democrats’ expansive infrastructure plan, which totals $3.5 trillion over 10 years. Under President Donald Trump, the corporate tax rate was slashed from 35 percent to 21 percent. The current proposal for the next reconciliation bill proposes a corporate tax rate of 26.5 percent.

The memo ends with the following disclaimer: “Your participation is strictly voluntary and not a condition of your employment.”

Verizon did not respond to a request for comment.