Sen. Kyrsten Sinema Is the Dying Scream of the Corporate Democratic Party

Sinema’s subservience to big moneyed interests is a holdover from an era of politics that is fading noisily into the past. 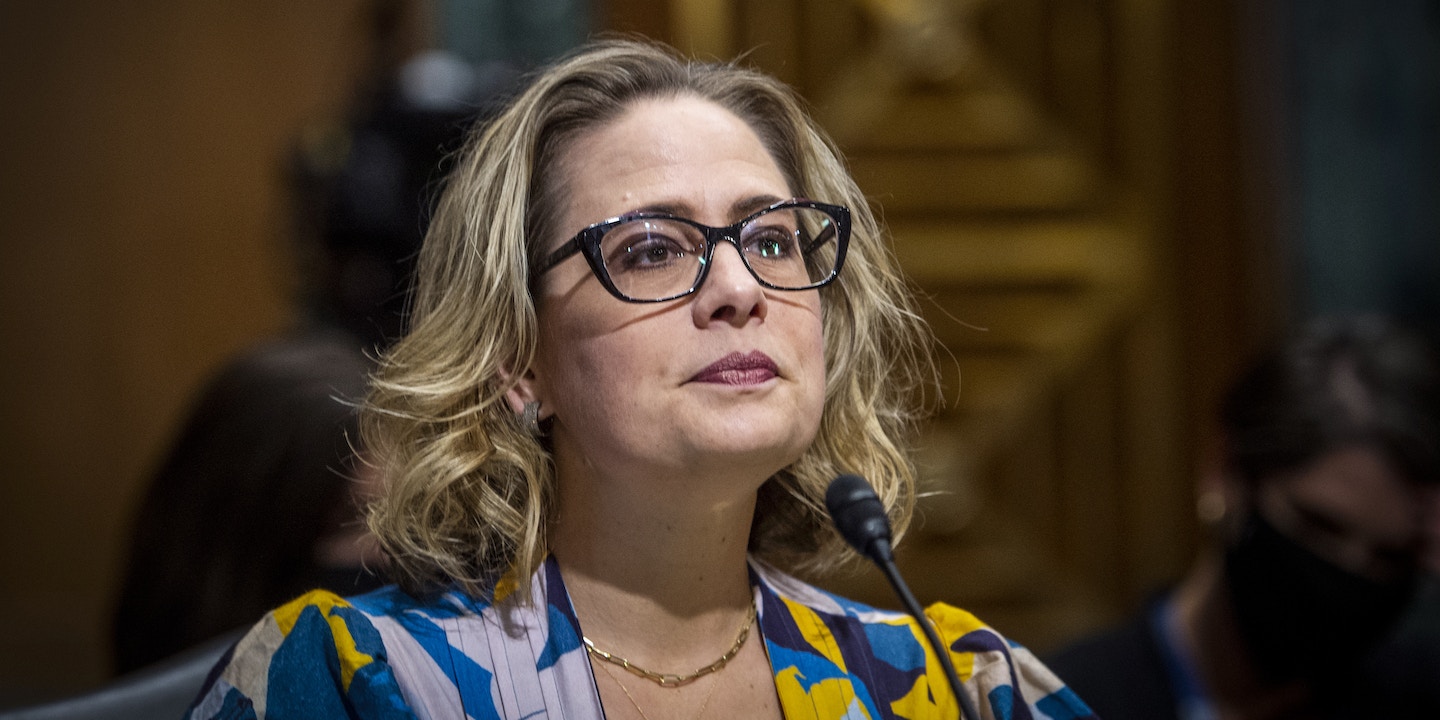 Kyrsten Sinema might be on the young side for a senator — less than half the age of some of her colleagues — but she represents the Democratic Party’s past. Think of her and Sen. Joe Manchin, D-W.Va., as the dead hands reaching out of the grave, grabbing at the party as it tries to move on from them. They might have managed to claw back spending on the Build Back Better Act, but the reality that their time has passed is clear. And the way you can measure this most directly is in terms of dollars.

For Sinema in particular, her approach to the negotiations — to push against social spending and tax hikes on the rich and corporations — has cost her badly in the polls at home and hasn’t had much of an upside when it comes to campaign cash. Her model of politics is outdated, though it has been the dominant form for most of her life.

In the 1980s, in response to the Reagan Revolution and the ongoing realignment that broke what Democrats thought was a permanent stranglehold on Congress, the party developed what was called at the time a “PAC strategy” but today is just called fundraising. Republican candidates in 1980 had heavily outspent Democrats, who believed that their name recognition and long record — they implemented the New Deal, won World War II, enacted the Great Society, and so on — meant that the GOP was wasting money on television. When that turned out not to be the case, Democrats realized that they needed comparable money of their own, and the fundraising idea was that since Democrats still had durable control of the House of Representatives — they could cling to it for 14 years after Reagan’s 1980 election — businesses that had interests before Congress needed to start ponying up for access.

Raising corporate money is not actually that efficient.

Access quickly turned to alliance, and the party drifted heavily in a pro-business direction. These “New Democrats” argued that the party had to beat back the power of special interests — and by special interests, they meant civil rights advocates, environmentalists, and labor unions. The presidential campaign of Jesse Jackson in 1988 pushed back against this hegemonic approach, but without a way to aggregate grassroots enthusiasm into the money needed for a national infrastructure, the threat was neutralized. Starting with Howard Dean in the 2004 presidential race, it finally started to look possible that a candidate funded by a large number of small, individual donations could compete with one funded by the rich and corporations. Technology was making it possible for people to quickly translate their enthusiasm not just into a honk and wave on a highway overpass, but also into actual money.

Then-presidential candidate Barack Obama showed the promise of small dollars in 2008, but he also raised an insane amount of money from Wall Street — and, once in office, he abandoned the network of small donors he had built and went with the big money. In his 2016 presidential campaign, Sen. Bernie Sanders, I-Vt., nearly toppled the Clinton machine with his famous $27 contributions. In 2018, the small-donor revolution spread to normie Democrats, with anti-Trump, #Resistance liberals throwing hundreds of millions of dollars at congressional Democrats, enabling them to retake the House. In 2020, small donors did it again, and the resource-rich Democrats took both the House and Senate.

One of the people who noticed this shift was Sen. Chuck Schumer, D-N.Y., once known as Wall Street Chuck. But thanks to all of these small donors, he now serves as Senate majority leader. A lot of people have chalked up Schumer’s pivot toward progressives as fear of a primary challenge from Rep. Alexandria Ocasio-Cortez, D-N.Y., and no doubt that’s part of what’s going on. Another factor is that Schumer is used to delivering for donors so that they keep the spigot flowing. And Schumer’s donors are now rank-and-file Democratic activists throwing in $27 at a time. In 2020, 41 percent of the money raised by Democratic Senate candidates came from donations of less than $200. What they want is to see Democrats fighting for what they ran on, so Schumer is happy to give them that fight.

Schumer also knows that raising corporate money is not actually that efficient, because each one of these lobbyists or rich people requires coddling, demands intimate access, wants internships for their kids, wants a dinner and a speech and photo, and on and on. Small donors just want you to win and then deliver what you promised. They don’t expect to ever meet you unless they’re volunteering at a headquarters where you happen to stop by.

Over the summer, Sinema showed just how much work it is. For the past few months, we were treated to endless stories about Sinema skipping important events in Washington to be at this or that fundraiser and even leaving the country to go to Paris to raise money. For all that trouble, Sinema broke her fundraising record, reporting $1.1 million in fundraising in third quarter.

Kyrsten Sinema fundraised $1.1 million in Q3 with a big assist from the pharmaceutical and financial industries amid reconciliation negotiations.

That's the most campaign money she's raised in any quarter since she became a senator. https://t.co/14a8IfdI3M

And it’s true that’s her record since she became a senator.

But when she was a candidate running for Senate — back in the third quarter of 2018, when Democratic voters thought she was a progressive and wanted to help her flip a Republican seat — she raised almost $7 million.

That’s not a fluke. You might think that 2018 was a special year and that Democratic small donors are no longer fired up since President Donald Trump is out of office and kicked off Twitter. That argument falls apart when you start looking at individual candidates. Fellow Arizona Democratic Sen. Mark Kelly is totally fine with the full $3.5 trillion proposal for the reconciliation bill, voted for a minimum wage increase, supports passing parts of the labor reform legislation called the PRO Act, and generally supports all kinds of reforms that Sinema is battling. Kelly, who’s up for reelection next year, raised $8.2 million this past quarter, while the Republican candidate expected to win that primary raised just over half a million.

OK, you’re thinking, maybe Kelly just has a ton more rich friends than Sinema. Well, the way to test that hypothesis is to look at the Federal Election Commission records for how many of the contributions were itemized, how many were unitemized, and how many were from PACs. Unitemized means that it was less than $200, and PACs are generally corporate PACS, but they could also be labor unions, and Kelly probably did well from them after supporting the PRO Act.

In the last three months, Kelly raised $3.4 million from small donors, according to his FEC report. In other words, he raised three times more than Sinema just from small donors even while Sinema was making a corporate-loving spectacle of herself and traveling the world to raise money. He made nothing from PACs. And his $3.8 million in itemized contributions shows that a Democrat in a swing state can back the Biden agenda and still raise money from big donors.

The fundraising profile that looks the most similar to Sinema’s is Manchin’s. Like Sinema, he’s up for reelection in 2024. He did better than Sinema in the third quarter, raising almost $1.6 million. But just $10,448 of that was made up of donations of less than $200. Of that, $1.3 million came from large donations, and $250,000 came from PACs.

Manchin, though, is distinguished from Sinema in that he can plausibly claim to be in a different political environment back home, a state that Trump carried in 2020 by nearly 40 points while losing in Arizona.

Sen. Tammy Baldwin is perhaps the best comparison, since she serves from Wisconsin, which Trump won in 2016, Biden won in 2020, and will be hotly contested in 2024. The last quarter, she raised $640,000, about half of which is from small donors. So if that’s Sinema’s game — selling out the entire Democratic agenda to do slightly better than Baldwin in the fundraising race — I guess congratulations are in order.

Over in Georgia, Sen. Raphael Warnock put Sinema’s haul to shame, raising $4.7 million from small donors in the third quarter on his way to raising $9 million overall. Maggie Hassan, the New Hampshire senator up for reelection this cycle, also raised more than Sinema: $2.5 million last quarter, more than $800,000 of which was from small donors.

And how did Sinema compare to a House member without a serious challenger?

The simple fact is that Sinema’s style of fundraising just isn’t the best way to raise large sums of money anymore. And most politicians ultimately follow the money, which means that they’re now going to follow the people, especially if they’re in swing states that millions of people care about. So if you believe that politicians are corrupt and only do what their donors tell them to do, this is actually good news about the future of the Democratic Party. For now, however, the party’s past still has a death grip on the present.